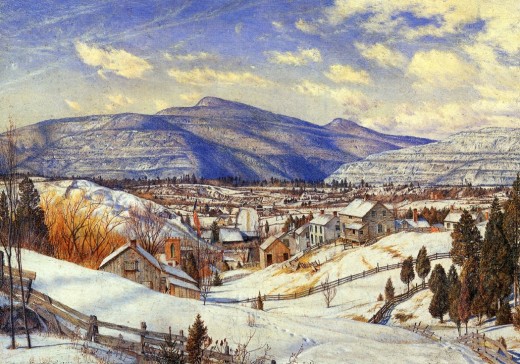 Winter Landscape – Valley of the Catskills by Charles Herbert Moore

As we look back on the year that was, 2015 might be remembered as the year the Catskill Mountains were christened “the New Hamptons.” Despite our sardonic snickering over the Catskills being anything even remotely like the Hamptons (or, specifically Montauk), we can’t deny that both the northern and western Catskills received a lot of love and attention over the past year, from the region’s “hickster restaurants” to arts and craftiness to the revitalization of its inns/lodgings scene. The temptation to run comparisons between the Catskills and certain neighborhoods in and around NYC seems irresistible. However, the Catskill Mountains are as individual as they come, offering refuge to those seeking part-time escape and those who make a full-time life here because they love its natural beauty, verdant landscapes, and slower-paced way of life.

We think the Catskills’ popularity hasn’t peaked (see what we did there?) just yet. Further, we predict 2016 is going to be an even bigger year for the Catskills…that is, until the real estate prices stop being so gosh-darn reasonable. Until then, let’s bid a fond farewell to 2015 by reveling in the properties the northern and western Catskill Mountains have to offer even as we say hello to 2016, AKA, The Year of the Catskills.