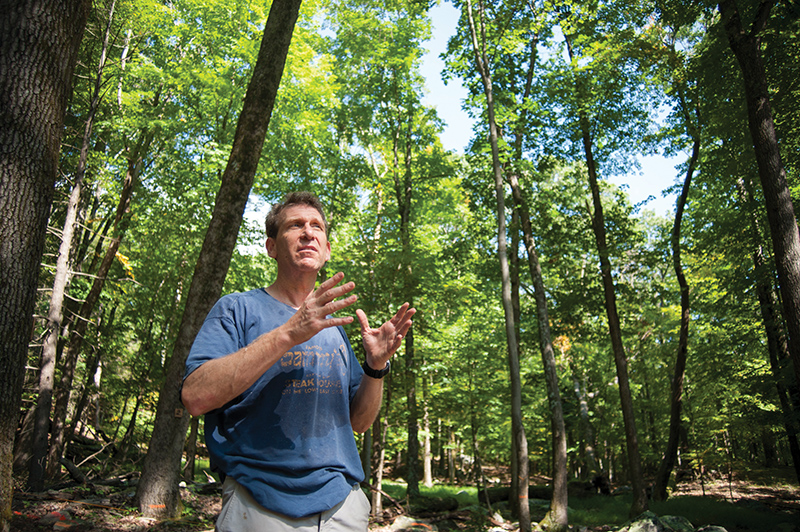 Throughout history, architectural innovations have fundamentally changed the way humans live. The development of aqueducts and plumbing in ancient Rome reduced the spread of disease by transporting wastewater out and clean water in, letting cities thrive. During the late 19th century, the invention of the elevator allowed American cities to grow vertically and with greater density, creating the modern metropolis. And in the early 20th century, automobiles helped cities spread horizontally, precipitating the birth of suburbs and changing the face of America.

Now Manhattan architect and contractor Adam Kushner believes large-scale 3-D printing will create the next big paradigm shift, ultimately allowing anyone, anywhere, to use natural materials to build a house. Invented by Italian designer Enrico Dini in 2005, the D-Shape 3-D printer uses computer software and an approximately 10-foot-by-15-foot, two-story machine to create complex shapes out of ingredients like sand.

The technology is nothing short of revolutionary, says Kushner, who has designed and built a variety of conventional homes and apartments, as well as commercial spaces.  Throughout his career, he has been interested in the intersection between art and science. “Large-scale 3-D printing redefines being a contractor, it redefines being an architect, it redefines who gets to build,” he says. “It will no longer be a privilege [to build]; everyone is going to be able to produce their own shelter in some way.”

Kushner has also partnered with green entrepreneur Dan Bernard and investor Mark Lazar; together they form D-Shape’s American branch. D-Shape’s first American project is an ambitious one: to design the world’s first 3-D-printed estate on land in Gardiner, a small town in southern Ulster County.

Kushner discovered Gardiner as a college student at Rensselaer Polytechnic Institute (RPI) and regularly spent weekends rock climbing in the Shawangunk Mountains. In 2002, Kushner and his family became weekend residents of Kerhonkson, across the Shawangunk Ridge; 10 years later, he bought a five-acre parcel of land in Gardiner at the foot of the Millbrook Range, some of the Shawangunks’ tallest cliffs. 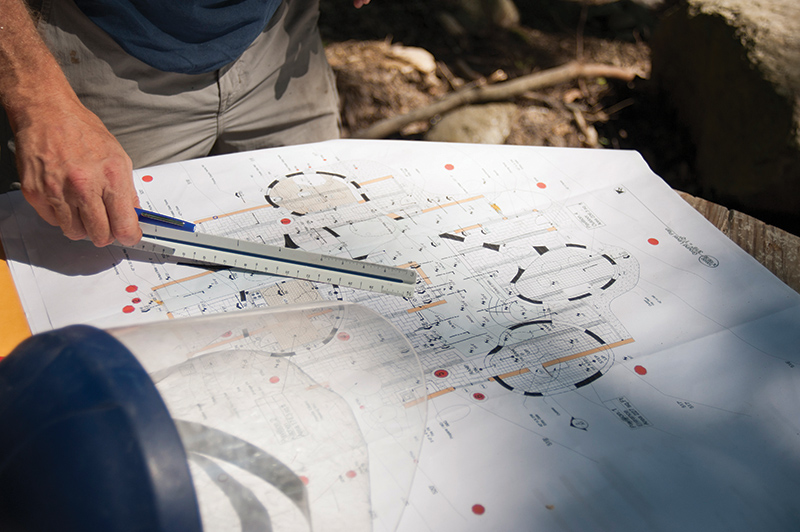 Plans for Kushner’s 3-D-printed estate, currently being developed in Gardiner.

A year later, Kushner stumbled into the world of large-scale 3-D printing online via the 3-D Print Canal House, an exhibition, research, and building site for 3-D printing architecture made from bioplastic (biodegradable plastic derived from biological substances rather than petroleum) in 2016 by the Dutch architects DUS in Amsterdam. Until then, 3-D printing technology had mostly been done on a smaller, tabletop scale, using plastic and occasionally metal or ceramics to print everything from bookends to artificial limbs. Large-scale 3-D printing performs the same layer-by-layer printing process, but utilizes electric stepper motors and up to 300 nozzles to build large-scale projects that are increasingly complex. While the 3-D printing machine can be adapted to utilize a variety of materials, it was especially designed to transform organic materials like sand and salt water into concrete shapes. Kushner quickly realized the technology could be adapted to a much broader scale.

“It just sang to me,” he recalls. He realized he’d come across something important with a potential that had not been fully comprehended. “There are about six companies in the world with this technology, and we are the only ones in America who have gotten a permit to actually build a real structure using the 3-D process,” he says. If things go as planned, Kushner and his team will be the first people in the US to have created an entire estate, including a house, pool, and outbuildings, through large-scale 3-D printing.

But first Kushner needed to obtain a building permit from the Town of Gardiner, which was no small task. There was no classification for this type of construction in the building codes, so he had to explain his vision to the permit office. Eventually, Kushner was granted a permit based on his extensive experience and the fact that the property will be owner-occupied. The next step was getting the machine shipped from Dini’s manufacturing and printing facility in Pisa, Italy, to Brooklyn in the fall of 2016. That’s when former set designer and theater technician Stanley Zabecki and his assistant Steve Bernard stepped in to handle the daily on-site operations. Self-described “tinkerers,” they both have a passion “for taking things apart and putting them back together in weird ways,” explains Bernard. 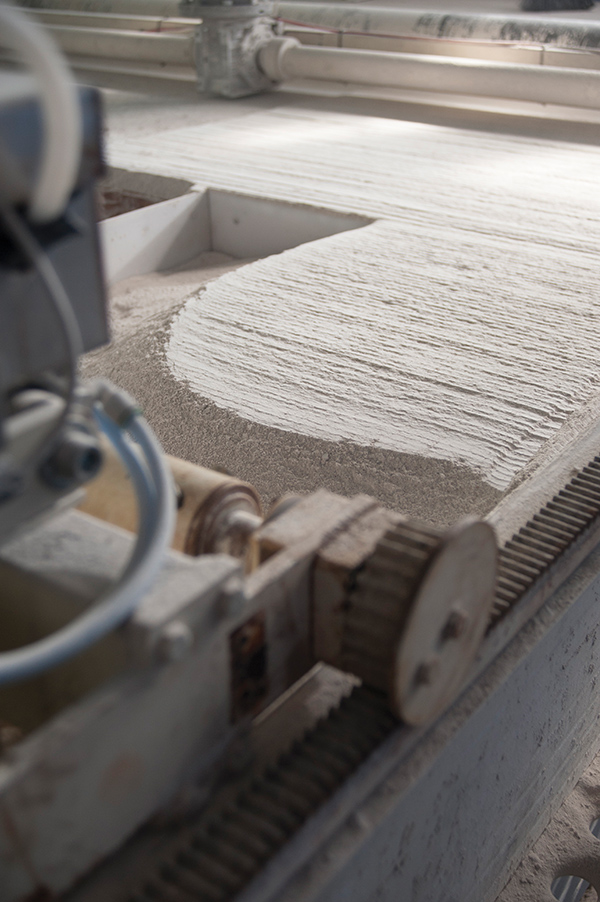 Using their “unlimitations,” as Zabecki puts it, to their advantage, they spent the better part of last winter adapting the machine to suit their needs. Zebecki, who now lives onsite in a trailer, and Bernard, who lives down the road, have continued to adapt the machine and experiment. “We don’t have tons of money—if we think the machine needs something we either make it, modify it, invent something new, or devise a workaround,” Zebecki explains. “The machine doesn’t really look like it did six months ago—it’s evolved.”

Kushner agrees. “We’ve already improved the machine 30 percent since we got it,” he says. “Everything we are doing is meant to be replicated on a global scale.” The goal is not only to create new construction methods that can be easily replicated, but also to reduce the environmental impact of construction by creating new ways to build from readily available organic materials. By adding saltwater to a mixture of magnesium and sand, Kushner and his team are using the printer to create concrete comparable to calcite or dolomite in a matter of hours. The simplicity of the ingredients is intentional—saltwater, magnesium, and sand are among the Earth’s most prevalent materials. (The team is also experimenting with sawdust and other easily accessible organic materials.)

If the technology succeeds, people will be able to “literally dig up the earth below them and use it to print,” says Kushner. This would not only democratize construction by reducing transportation and material costs, but it would also greatly reduce its environmental impact. The majority of concrete in the world today is made from Portland cement, the heating and creation of which emits massive amounts of carbon dioxide. As it “cures” over its lifetime, conventional concrete continues to emit carbon dioxide. But magnesium, sand, and saltwater are all inert and completely organic, and so far the blocks created and tested by the D-Shape team emit little to no carbon. Zabecki believes that it’s even possible to produce concrete that will absorb carbon dioxide as it cures.

Kushner plans to use the developing technology to build a 2,000-square-foot, three-bedroom house, along with an onsite pool and cabana. The team has begun excavating the pool site and plans to begin laying panels for the pool this fall.  The project is still somewhat conceptual, with the site functioning as a laboratory. But Kushner envisions a dome-shaped main house with similar surrounding architecture, all of it dotted with skylights. “Concrete works most effectively and efficiently as a dome,” he says. What he describes as the “open but enclosed, enclosed and yet open” design responds to the natural surroundings, showcasing views of the nearby cliffs and creating a structure that thrives in all four seasons. Small, tight spaces with outward facing decks will allow for heat conservation and showcase the winter views. Larger, open spaces will allow residents to enjoy the warmer summer months. Kushner plans to make the home carbon neutral by adding solar cells and possibly wind power.

The D-Shape team is adjusting the house’s design as they discover the possibilities of the new technology. At this point, they have the technology to build a one-story structure. One of their current challenges, says Kushner, is to create rebar, or structural reinforcement, for the concrete. “The minute we can figure out [how to create] rebar we won’t be limited to one- or two-story structures,” he explains. 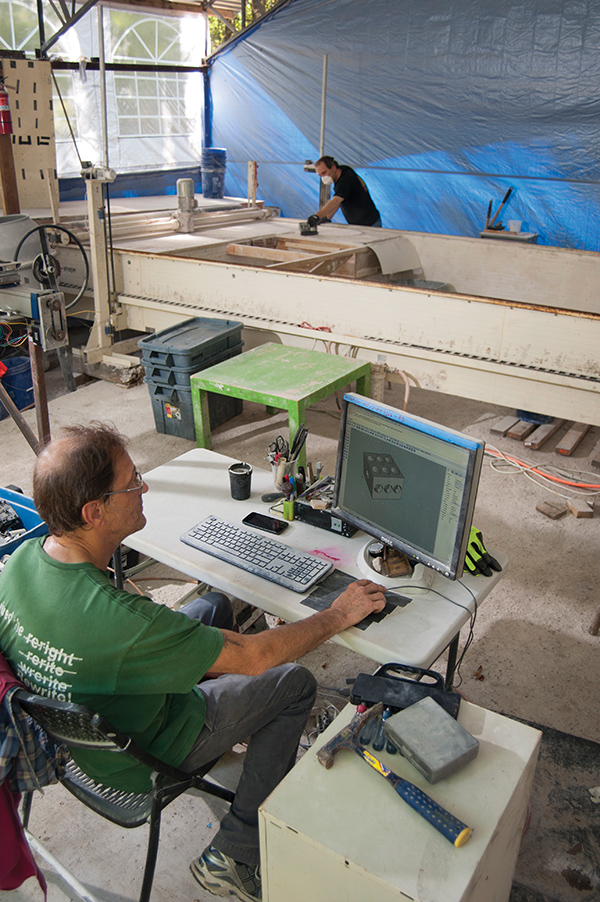 The D-Shape team runs the 3-D printing apparatus in a temporary shelter constructed on site.

The team has the support and expertise of the nearby materials lab at SUNY New Paltz. “SUNY New Paltz has one of the largest 3-D printing labs in the country, with over 30 MakerBot machines,” says Kushner. “It’s been great to have them so close—I’ve given lectures there and they’ve been a sounding board for information and advice.”

Kushner sees multiple possible applications for large-scale 3-D printing technology. Because it provides the ability to print on site and on demand, using readily available materials, the technology could be used to create refugee housing, military bunkers, and temporary shelter in disaster zones as well as to repair pylons, bridges, and other large-scale infrastructure. Zabecki envisions a large-scale 3-D printing machine that can be rolled from one area to the next, printing houses from local materials in one continuous piece.

Everyone involved with the project sees the technology’s potential to build lunar bases, solving the problem of creating human habitats in space. In fact, Dini is partnering with the European Space Agency and architects Foster + Partners to test this idea, utilizing magnesium oxide to simulate lunar dust. The technology could also be used to address environmental degradation. Dini has already used it to build homes for fish—artificial coral reefs printed from sand—and in partnership with the Dutch dredging company Boskalis, he has successfully launched the reefs off the coast of Monaco, where they have been accepted and inhabited by Mediterranean sealife. Kushner even foresees a day, five to 10 years from now, when a building—and its furnishings, cabinetry, plumbing, and even electrical components—can be printed on demand. “We can do designs that are unimaginable and can’t be created with any other methodology,” he says.

But the project is about much more than being first people to build an estate using this technology. “It still has not sunk in just how big what we are doing is,” Zabecki says. “We’re living in the woods and working on an invention that will eventually change the world. I can’t believe I’m part of it.” But Kushner explains his motivation even more simply: “I want to leave the world a better place.”