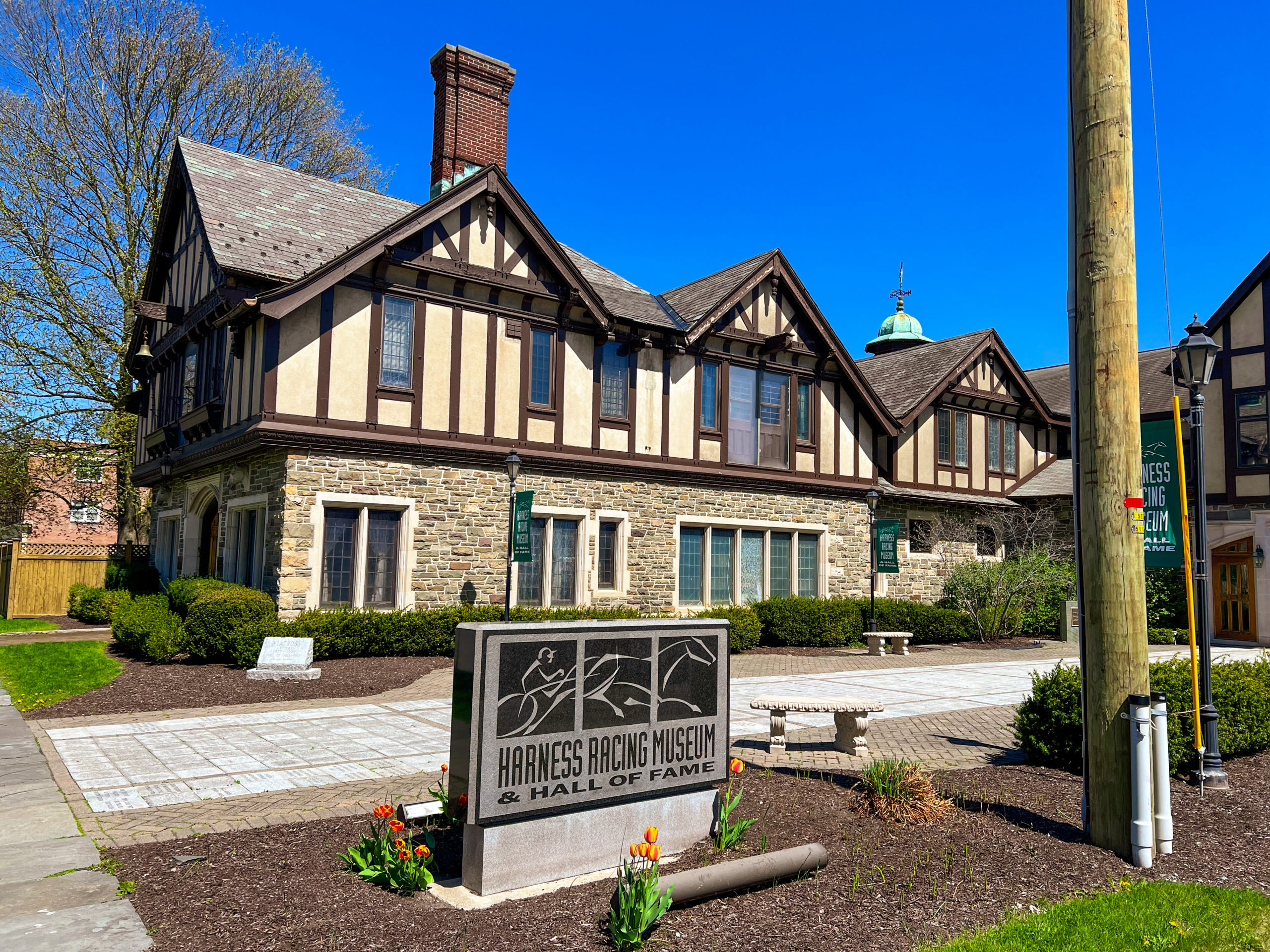 This may come as a shock to the teens who have nicknamed their quiet little village “Slow Motion Goshen” because of the pace at which life unfurls here, but there was a time when Goshen was synonymous with speed. Reckless, hair-raising, devil-may-care speed! Savage displays of raw horsepower!

That’s literal horsepower. In the late 1700s, locals would routinely drag race their horses down Broad Street in an 18th-century precursor to The Fast and the Furious. But most people in the village just wanted to live their chill, colonial-era lives in peace and wondered if the equine insanity could instead happen literally anywhere else. So Fiddler’s Green, a race track for horses, was created in Goshen so that peace and quiet would return to the village’s streets. 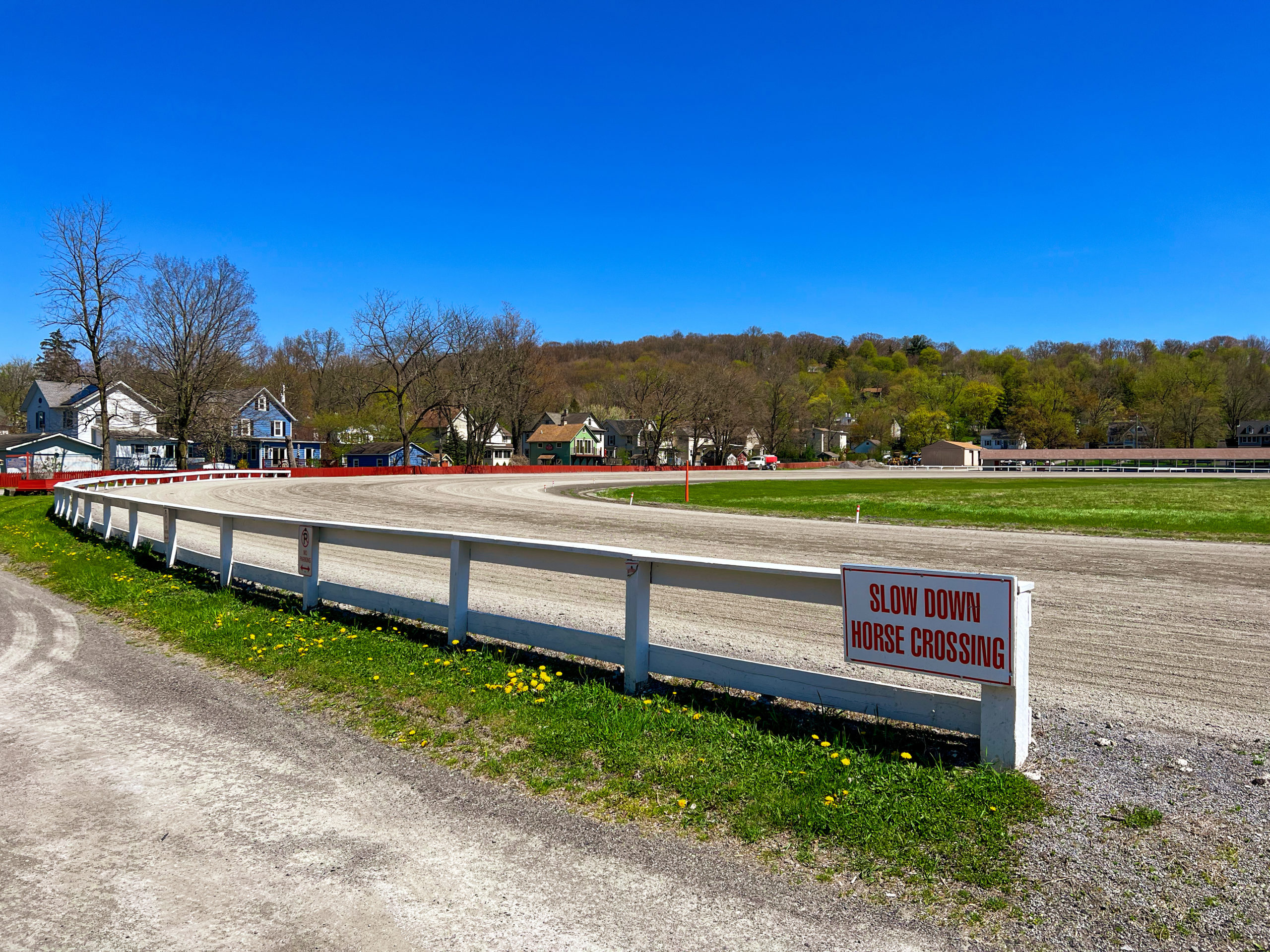 It didn’t last. In the early 19th century, harness racing came to Goshen and a new generation of villagers returned to racing downtown, only this time while being pulled behind the galloping horses. This led to the creation of a second track, for harness racing: the half-mile Historic Track, now called that because it’s the oldest active trotting track in the country and the only sporting facility designated a National Historic Landmark.

The track sits behind the Harness Racing Museum & Hall of Fame and was, until a certain plastic brick-worshiping cult set up on the outskirts of town, what Goshen was most famous for (we’ll get to the Legos in a minute.) Visitors from all over the world still come here to see the track that President Ulysses S. Grant once caught a race at, and to witness the occasional horse race for themselves. 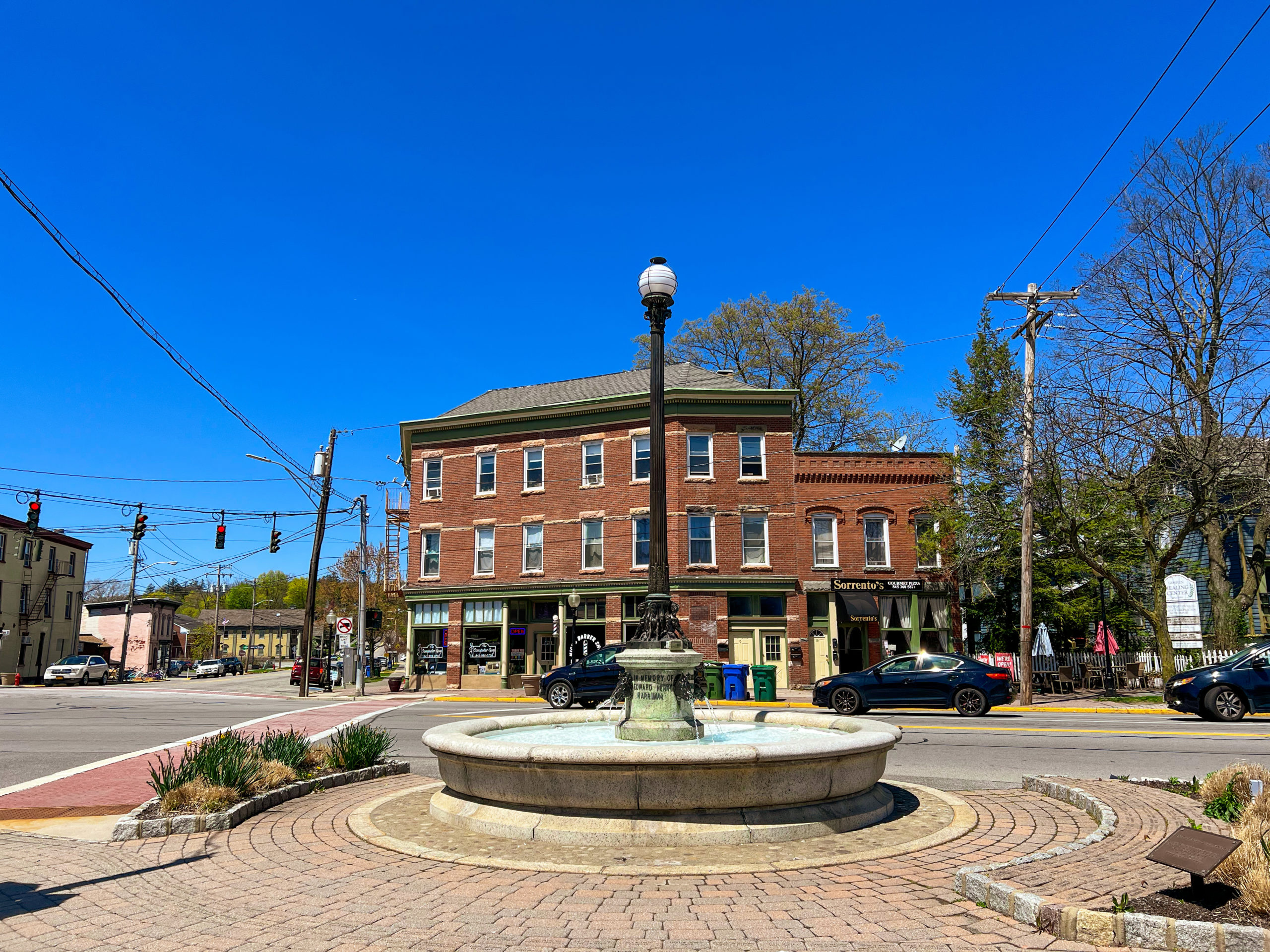 The fountain at the five-way intersection at the center of the Village of Goshen. Photo by Brian PJ Cronin

The track was also, until recently, the annual site of another race: It was the final half-mile of the Hambletonian Marathon. As a past finisher of that race, I can attest to the fact that it is, indeed, quite a thrilling track (although my speed upon it was probably closer to “Slow Motion Goshen” than that of the track’s usual four-legged competitors).

That Goshen’s roots date back before the automobile era is clear from its street plan. At the center of town is a five-lane crossroads, the spokes of which fan out into a beguiling mixture of additional traffic circles with various monuments at their centers, brick alleys, narrow side streets, and a plethora of flatiron buildings. If you are a first-time visitor, your best bet is to drive straight to a municipal lot and leave your car there for the duration of your visit and walk everywhere, no matter how far apart your destinations are. The compact village is a walker’s (or horse riders’) dream and a driver’s nightmare. Love yourself enough not to accidentally find yourself driving down a glorified alleyway. 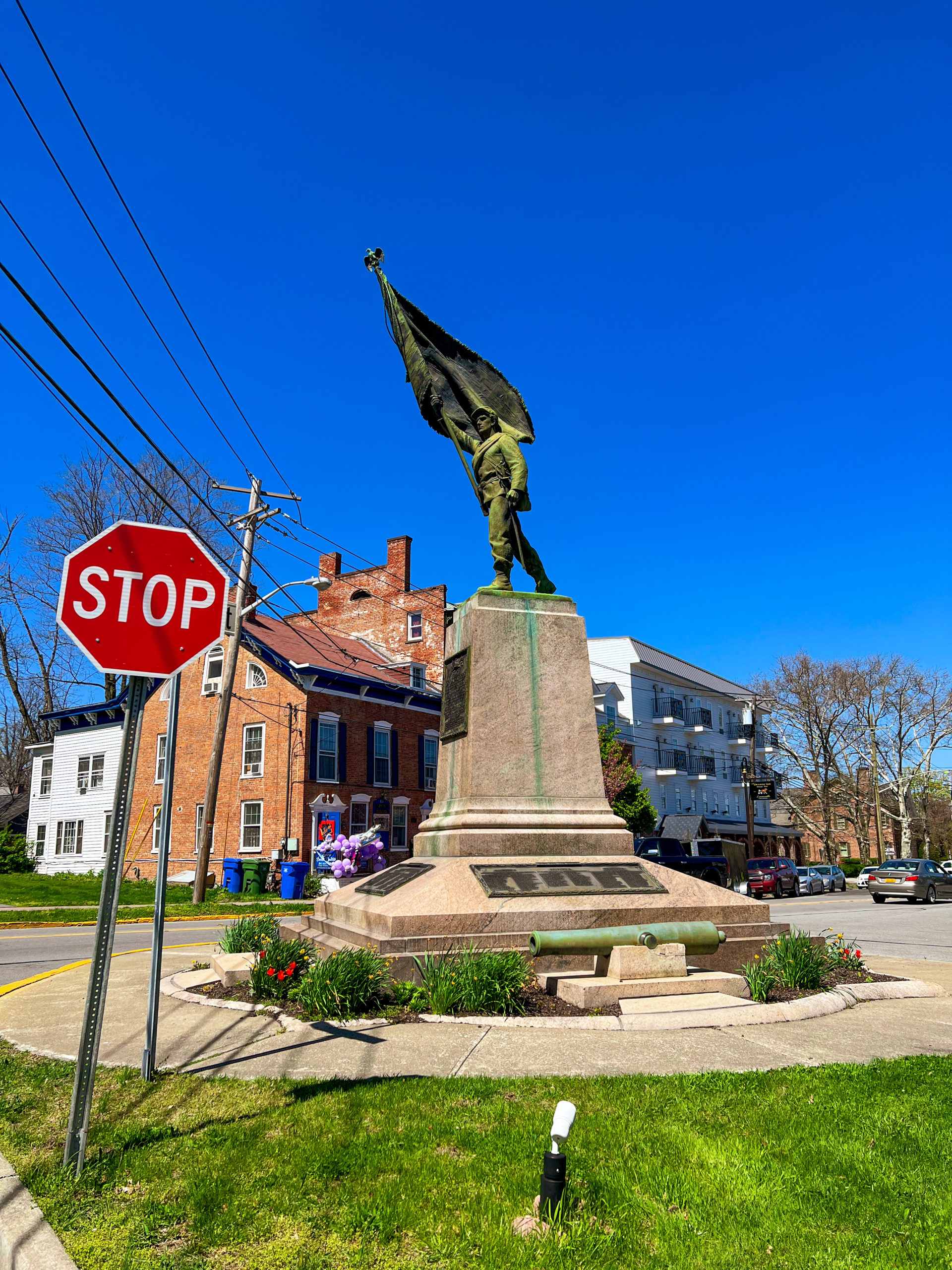 A monument at one of Goshen’s intersections. Photo by Brian PJ Cronin

Once on foot, you’ll be able to appreciate all the village has to offer, but expect to still get confused. I have not yet been to Goshen without accidentally walking into the back door of one of the businesses I was looking for instead of the front door, but maybe next time! If you don’t have a comfy pair of walking shoes, head over to Confluence Running for everything you need to get you through a jaunt around town or an ultramarathon. Prefer to bike? Joe Fix Its has been here for more than 75 years, offering new and used bikes as well as the repair services implied in the name.

Looking for a traffic-free straightaway to test out your new kicks or wheels? One end of the 18-mile paved Heritage Trail is here in Goshen and runs all the way to Harriman State Park. The ice cream stand Trailside Treats is across from the trailhead for those who want to reward themselves after putting in the miles (or for those looking to calorie-load before heading out.) 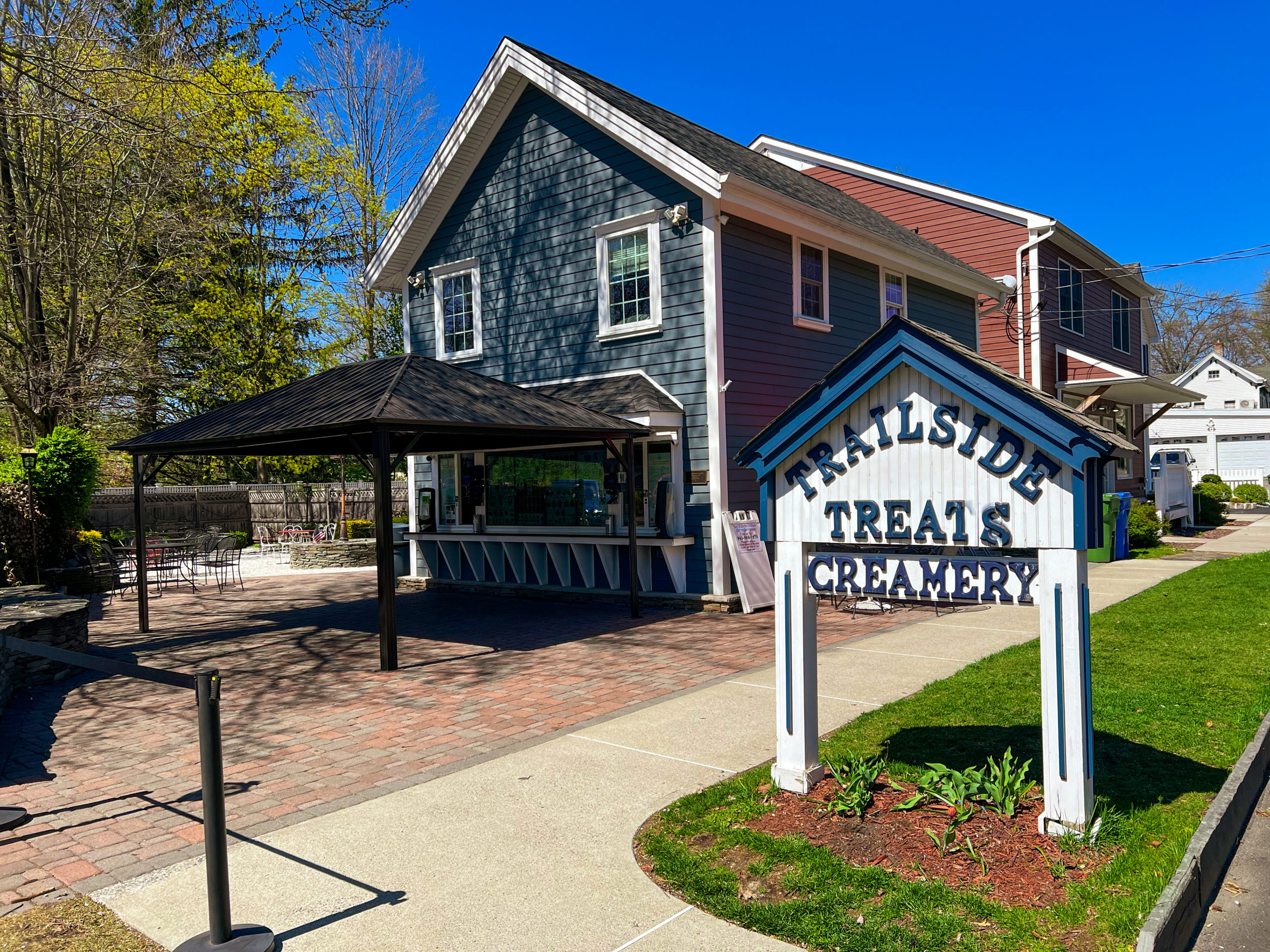 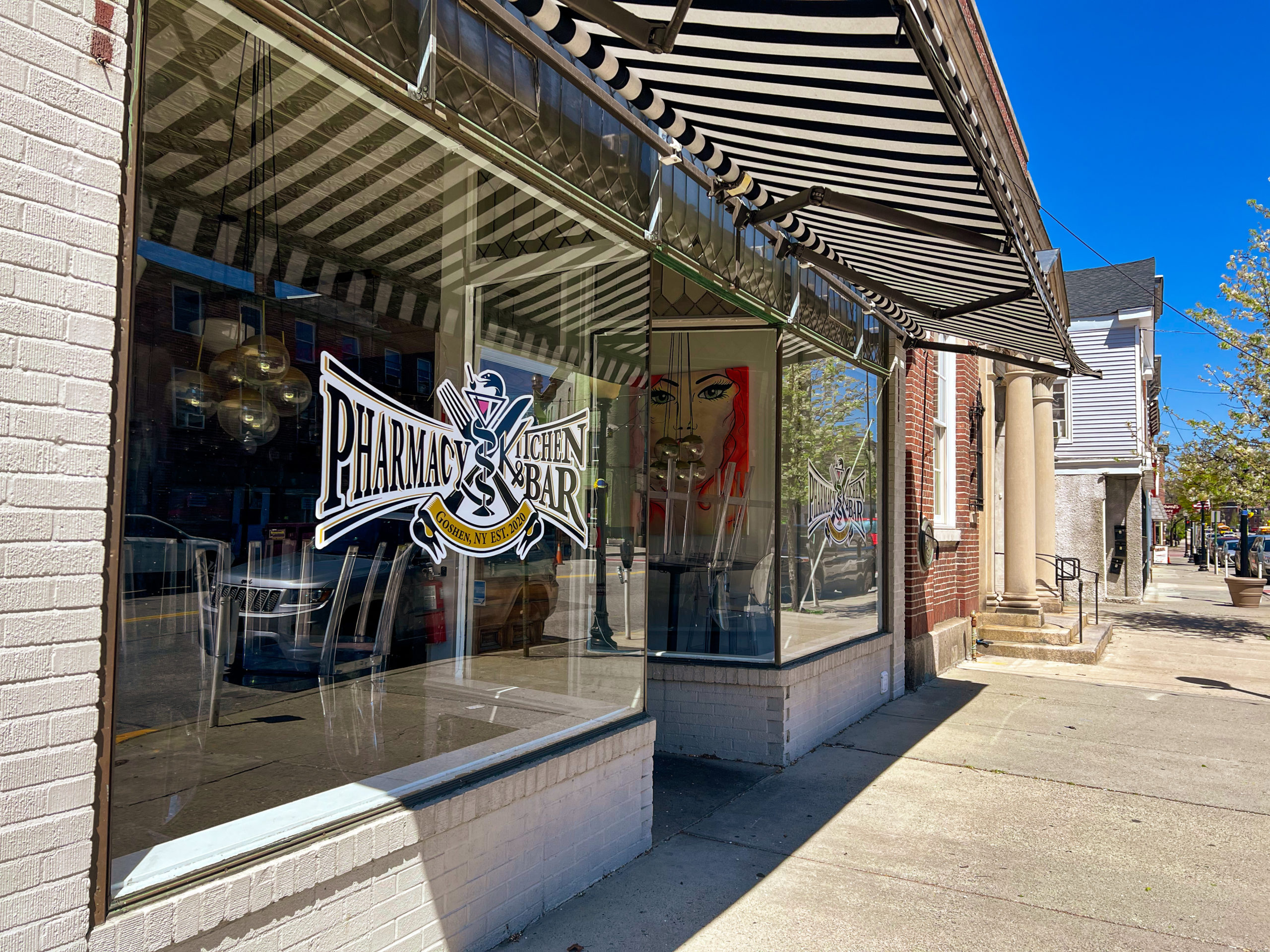 More elegant and substantial fare can be found at Catherine’s, which has been elevating local food since the locavore movement was a tiny glimmer in a hippie’s eye. Health-conscious, plant-based cuisine served in a more casual style can be had at the aptly named Thank Goodness It’s Vegan as well as Howell’s Sunflower Cafe, which has a wide variety of fresh salads and smoothies to supplement its more traditional diner fare. Those who just want to house a burger and a local craft beer are well served by both Brew and Craft 47. And Pharmacy Kitchen & Bar serves ramen, poke, and steaks in a historic, c.1861 brick pharmacy building.

Now that you’re stuffed, it’s time to remember where you parked. You did follow your humble correspondent’s advice and park in a municipal lot, right? Probably the best one to park in is the large lot by the Orange County Government Building which, to put it mildly, you can’t miss. 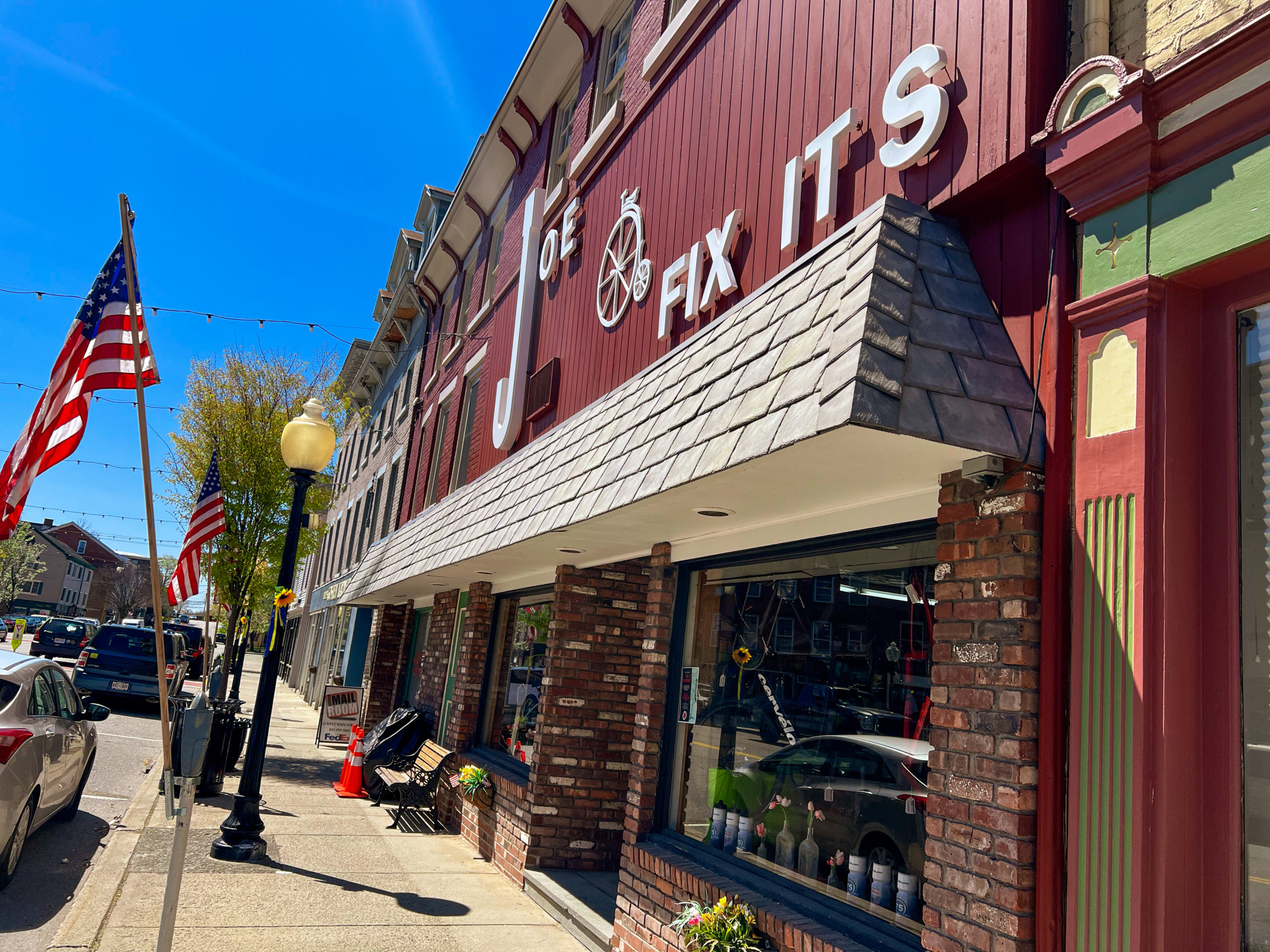 Some say the building, designed by acclaimed architect Paul Rudolph, is a stellar example of postmodern idealistic civic architecture, with the building’s many prominent windows symbolizing the dream of a transparent government. Others say it looks like a drunken ogre attempted to play Jenga with a stack of aquariums and gave up halfway through. Most people fall in the latter camp, but I must admit that the building’s goofy audacity is finally starting to grow on me. Anyone who comes to Goshen for an appointment inside one of its many cubes certainly won’t have trouble finding it.

Another point in its favor is that it’s no longer the dominant target of locals’ ire. That honor has transferred to Legoland, the new theme park/resort on the outskirts of town that comprises 150 acres, 30 million bricks, and hundreds of thousands of dollars in environmental fines. When the project was announced back in 2016, it seemed like a no-brainer: Who—besides anyone who has ever stepped on one barefoot—doesn’t love Legos?

Apparently the answer was “half of Goshen.” Over the next few years a protracted legal and municipal battle played out pitting those who thought the park would create jobs and benefit local business against those who decried the environmental degradation and feared that it would clog the streets with traffic and destroy the quiet ambience of Goshen. When one local restaurant jokingly unveiled a “Legoland Burger” in support of the park, people picketed the establishment. The protesters could have simply made the case that the burger—topped with bacon, cheese, mac and cheese, and pulled pork—was an accurate symbol of the project itself: It seems like an enticing good idea at first, but the next thing you know it’s hollowed out your insides.

The first phase of the park opened last summer, and so far it seems as though the feared brightly colored apocalypse has been avoided, although perhaps everyone was distracted by that whole global plague thing. Businesses reported a welcome increase in visitors. Traffic appears largely manageable so far, possibly on account of the fact that the park has its own dedicated exit off of the highway. 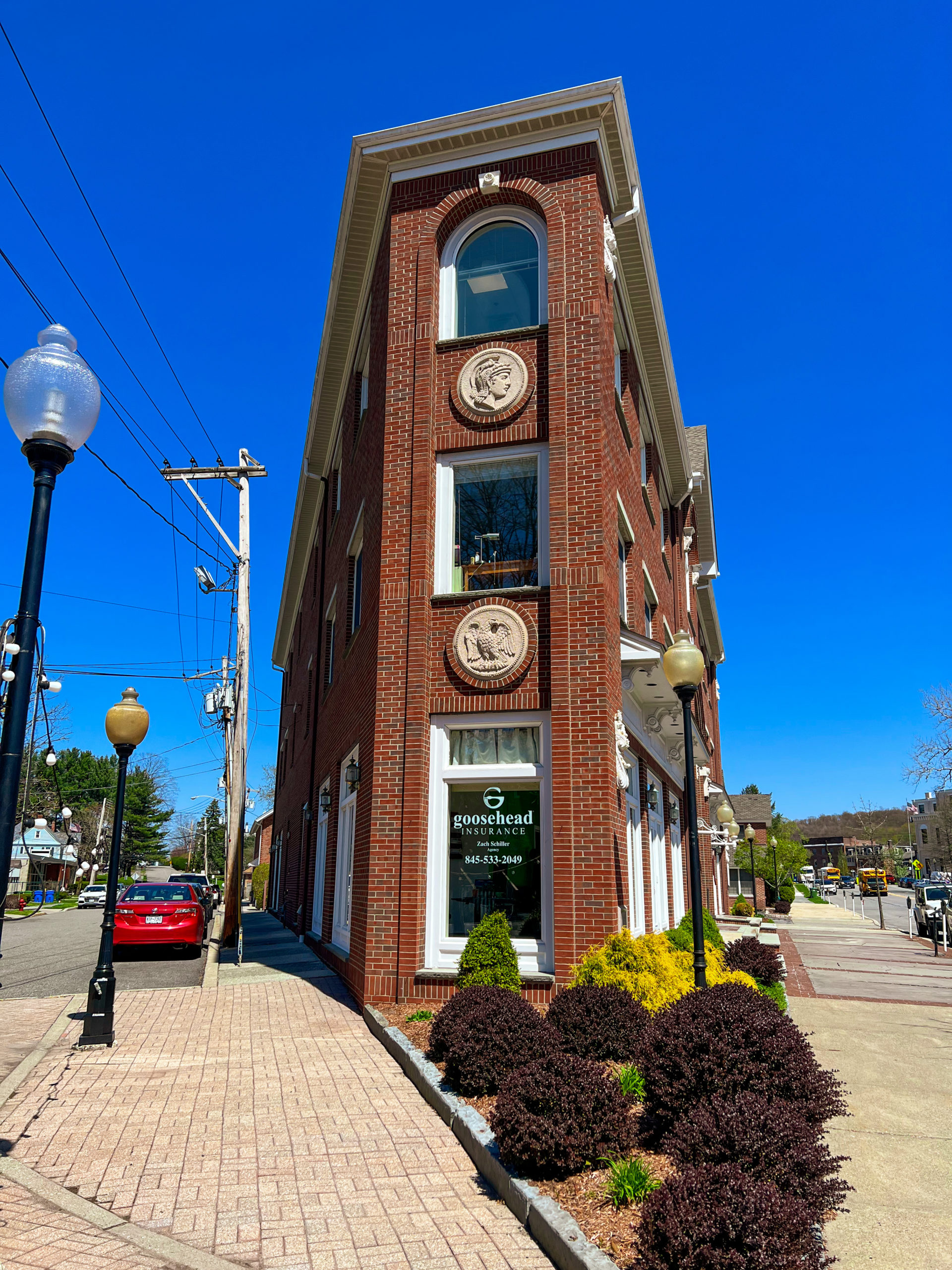 Time will tell if the people of Goshen and the denizens of Legoland can truly live in peace: This summer, the theme park’s water playground expansion opens, and if the pandemic spends the warmer months as merely background noise for most Americans, the massive crowds that the naysayers warned about could descend on Goshen after all. If that happens, perhaps everything won’t be awesome, but then again they didn’t like the unsanctioned downtown horse racing at first either. Given time, even the most controversial elements of a place, be they harness racing, brutalist architecture, or theme parks, often end up becoming beloved elements of a town’s character.