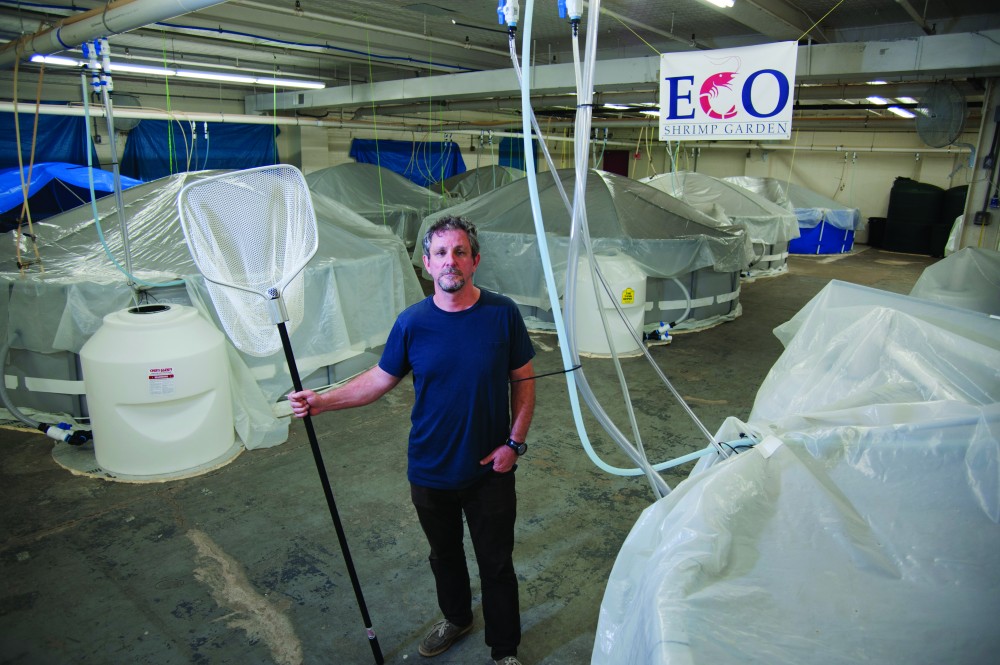 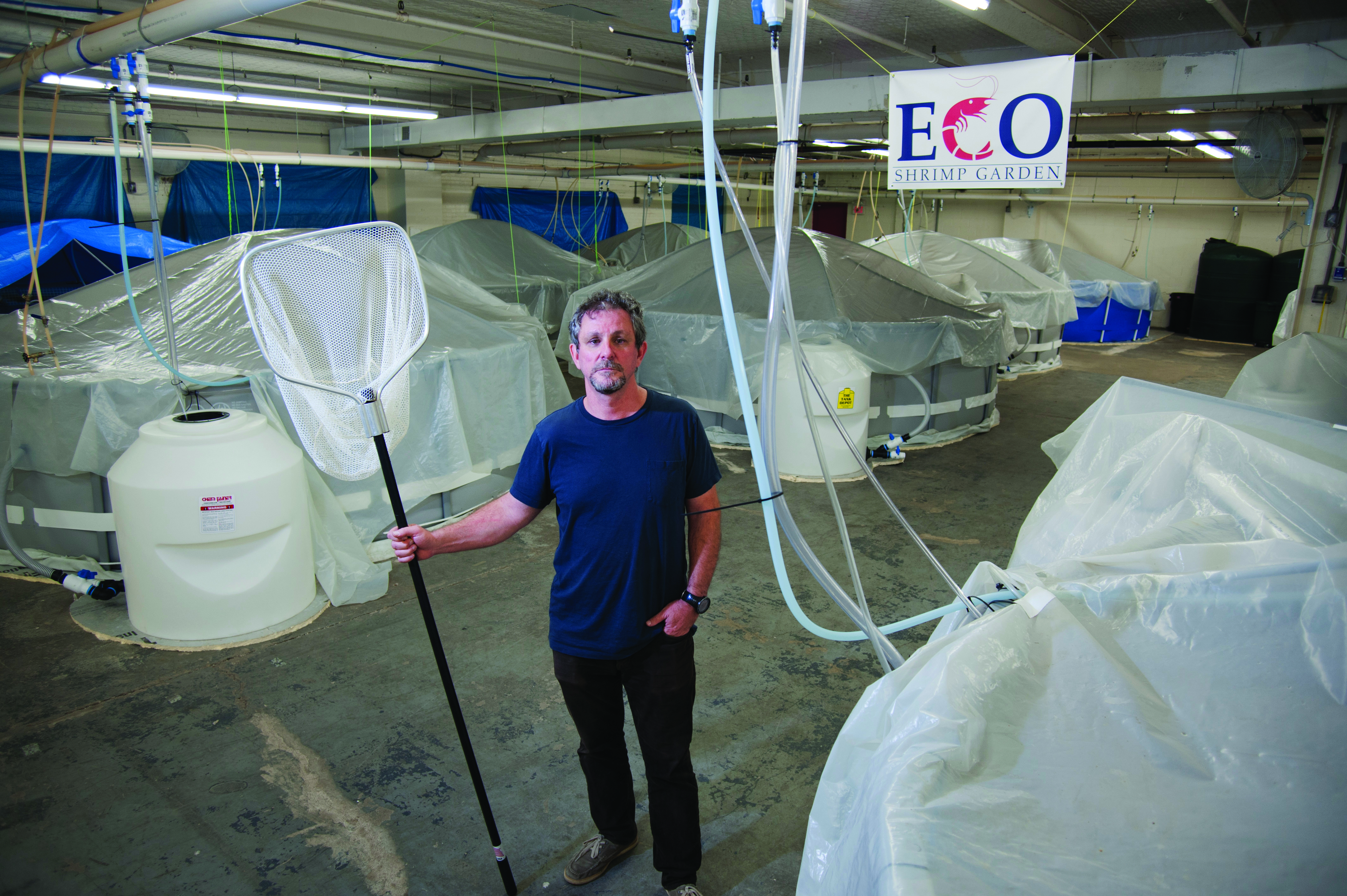 Frajmund, a Brazilian with French parents, began envisioning the shrimpery in 1985, when he was 16. On a hitchhiking trip around Brazil, he spent time with fishermen who walked the shoreline with their nets, catching 30 to 40 pounds of fish before breakfast.

By 1980, when China began shrimp farming, there were already signs of overfishing and poor aquaculture conditions. So Frajmund began formulating a plan for ecologically sound indoor farms that echo the oceanic environment. But after more than six months of research, he realized the technology had not advanced enough. Then, in 2013, he says, “I looked into it again and saw that it was now possible.”

Today there are 25 indoor shrimp farms in the U.S. Eco Shrimp Garden is the first one in New York State. “I particularly wanted to do it in an urban environment so that I could deliver to a market within two hours,” says Frajmund. Newburgh’s combination of convenient access to New York City and the prime local real estate market made it the right spot.Last year, says Frajmund, the U.S. imported 560,000 metric tons of shrimp grown in outdoor shrimp-farm ponds. Americans love shrimp, consuming almost four pounds per person per year on average, so chain restaurants endlessly promote shrimp, despite the oceans’ depleting supply. The FDA examined only 3.7 percent of foreign shrimp shipments in 2014, according to Consumer Reports. According to a 2014 New York Times report, most of the shrimp the U.S. imports comes from Latin America and Southeast Asia, where environmental and human rights experts have identified forced labor, hazardous working conditions, damage to ecosystems, and the use of hormones and antibiotics.

Frajmund compares current shrimp-farming with factory-farmed chickens. Increased awareness about factory-farmed chicken has resulted in consumer demand for free-range, organic, and hormone- and antibiotic-free chicken. Frajmund hopes this awareness will extend to aquaculture and shrimp. “I’m part of the movement for healthy foods,” he says. Eco Shrimp Garden has eight 14’ x 4’ tanks in operation, each incubating 150 pounds of shrimp. Frajmund plans to eventually have 24 tanks. “I started seeding the tanks in April this year, and after five months, I was ready to start selling,” he says. He purchases post larval shrimp seeds of the Pacific white-leg variety—the most extensively farmed species—from pathogen-free breeding companies in Florida and Hawaii. Frajmund is waiting to receive a nursery permit from the Department of Environmental Conservation, at which point he will begin breeding the seeds himself. “For their feed, I purchase a fish protein that has no antibiotics and no hormones,” he says. Frajmund is also researching alternatives to fishmeal, like seaweed. His ponds are in an enclosed area with biosystem security protocol in place, and no chemicals are used.

“My shrimp are happy!” says Frajmund. “When they jump! When they are energetic! It’s a shrimp spa.” Each shrimp is allotted a gallon of water. “How do you know when a shrimp is fresh?” Frajmund asks. “They have no smell other than the salty smell of the ocean. The heads stick on the body. They have two long antennas that you can see, and the shell is not loose and sticks to the flesh.”

Eco Shrimp Garden, located at 99 South William Street in Newburgh, sells fresh shrimp every day from 10am to 5pm for $25 per pound. That’s great news because, as Forrest Gump’s Benjamin Buford “Bubba” Blue says, whether you barbecue it, boil it, bake it, or sauté it, shrimp is “the fruit of the sea.”

Chef Phyllis Segura founded Cooking on the River, a personal and private chef company specializing in fresh, healthy, delicious foods in 2000. Chef Phyllis focuses on weekday meals for families, small dinner parties, intimate dinners, private cooking classes and demonstrations. he has been active in non-profit organizations like the New York Women's Culinary Alliance, Rockland Better School Food Coalition and the Rockland Farm Alliance. She has cooked for the famous, the unknown and the slightly infamous.