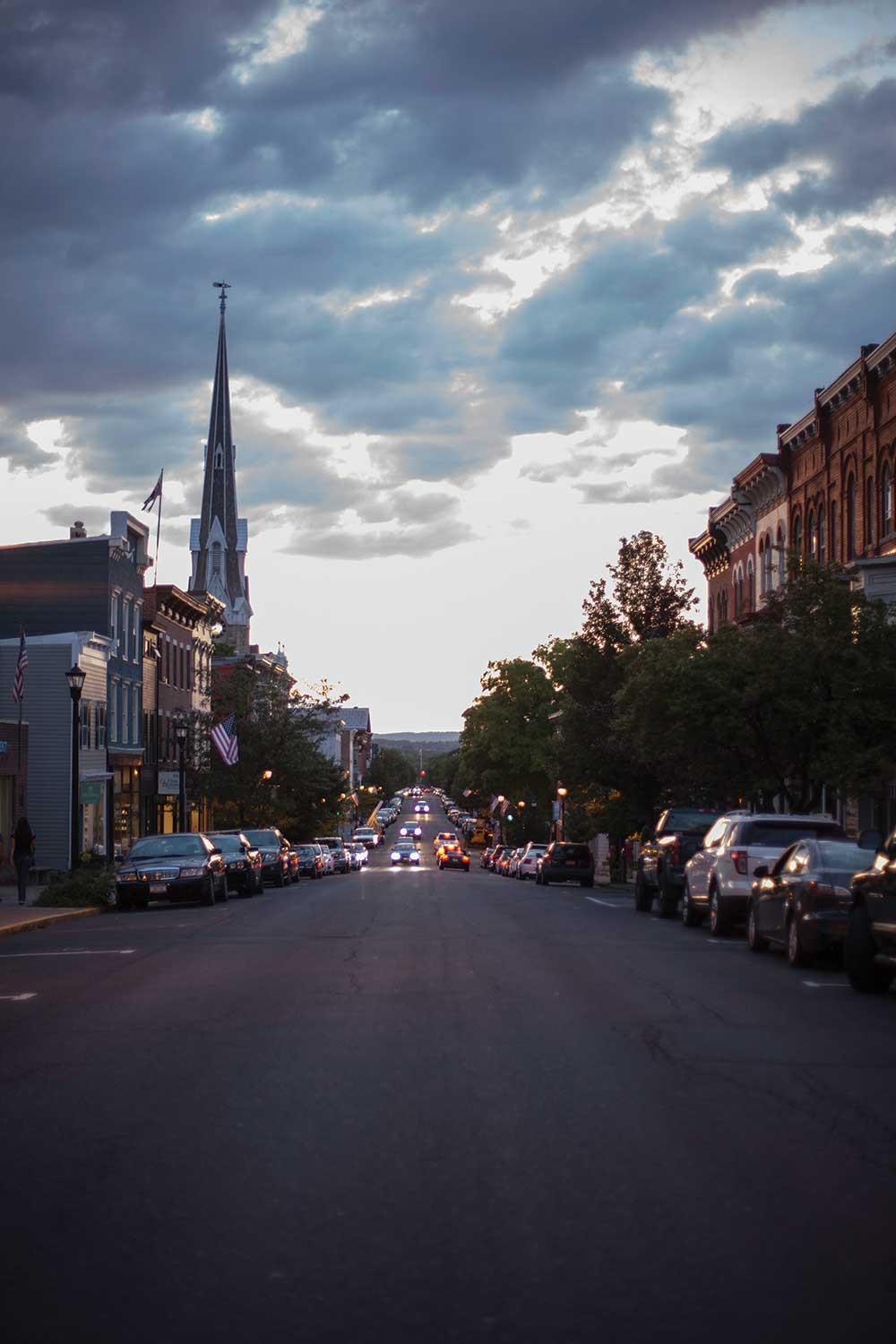 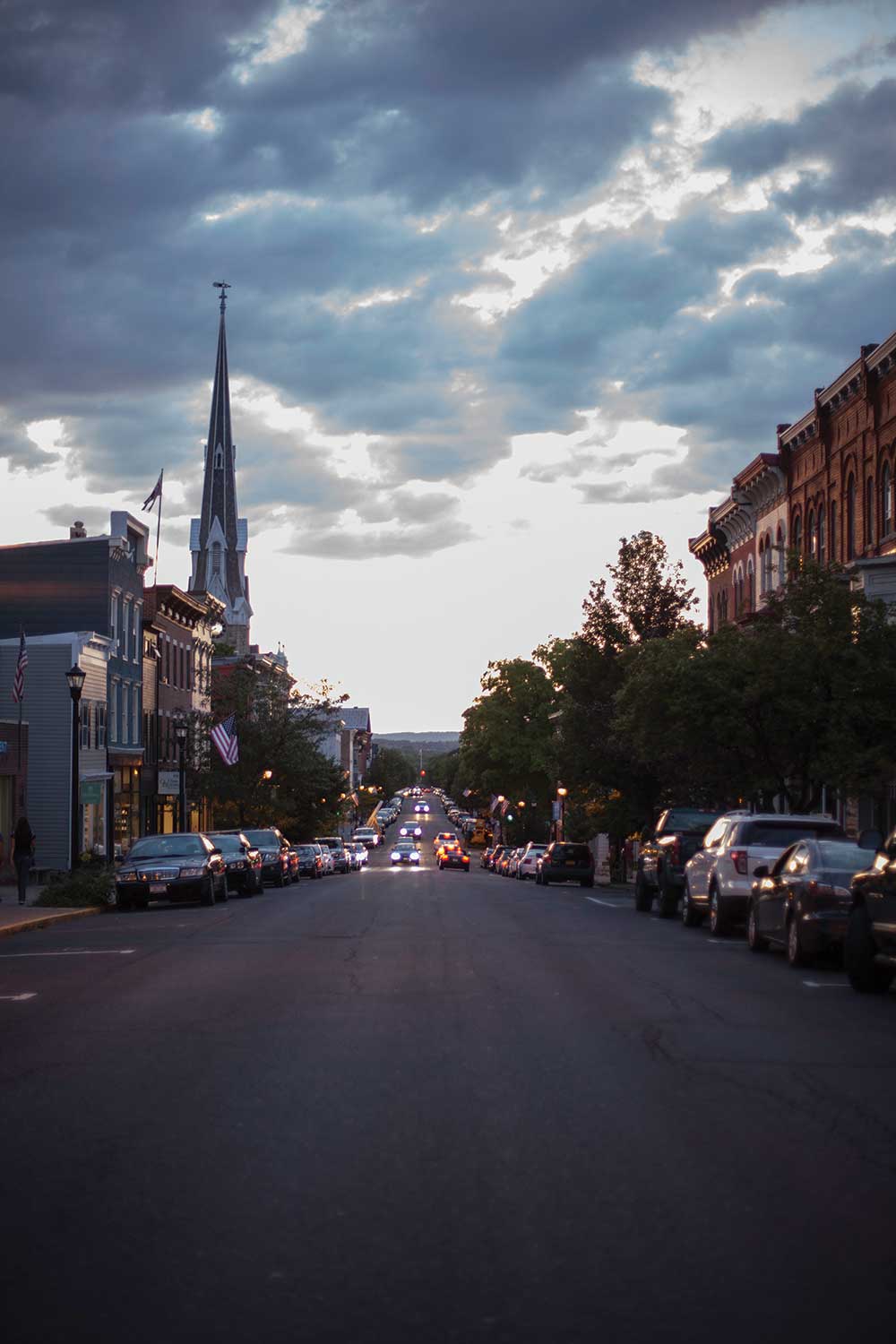 “Where will I go?” former Talking Heads front man David Byrne asked in an essay published in the Guardian in 2013, lamenting the decline of New York City’s formerly vibrant creative class. The essay—titled “If the 1% Stifles New York’s Creative Talent, I’m Out of Here”—continued, “Join the expat hipsters upstate in Hudson?” To which this city of 7,000 on the banks of its namesake river would surely reply: “Come on up! We have a bookstore that’s also a bar!”

Okay, so maybe Hudson is sick to death of being compared to Brooklyn (seriously, don’t even bring it up), but it’s hard not to wander along the main drag of Warren Street, peeking inside its many galleries and cafés, without remembering a time when you could order a good cup of coffee and a croissant in Park Slope, plunk down a $10 bill, and get change back. So head north and enjoy this former whaling city on its own numerous merits. 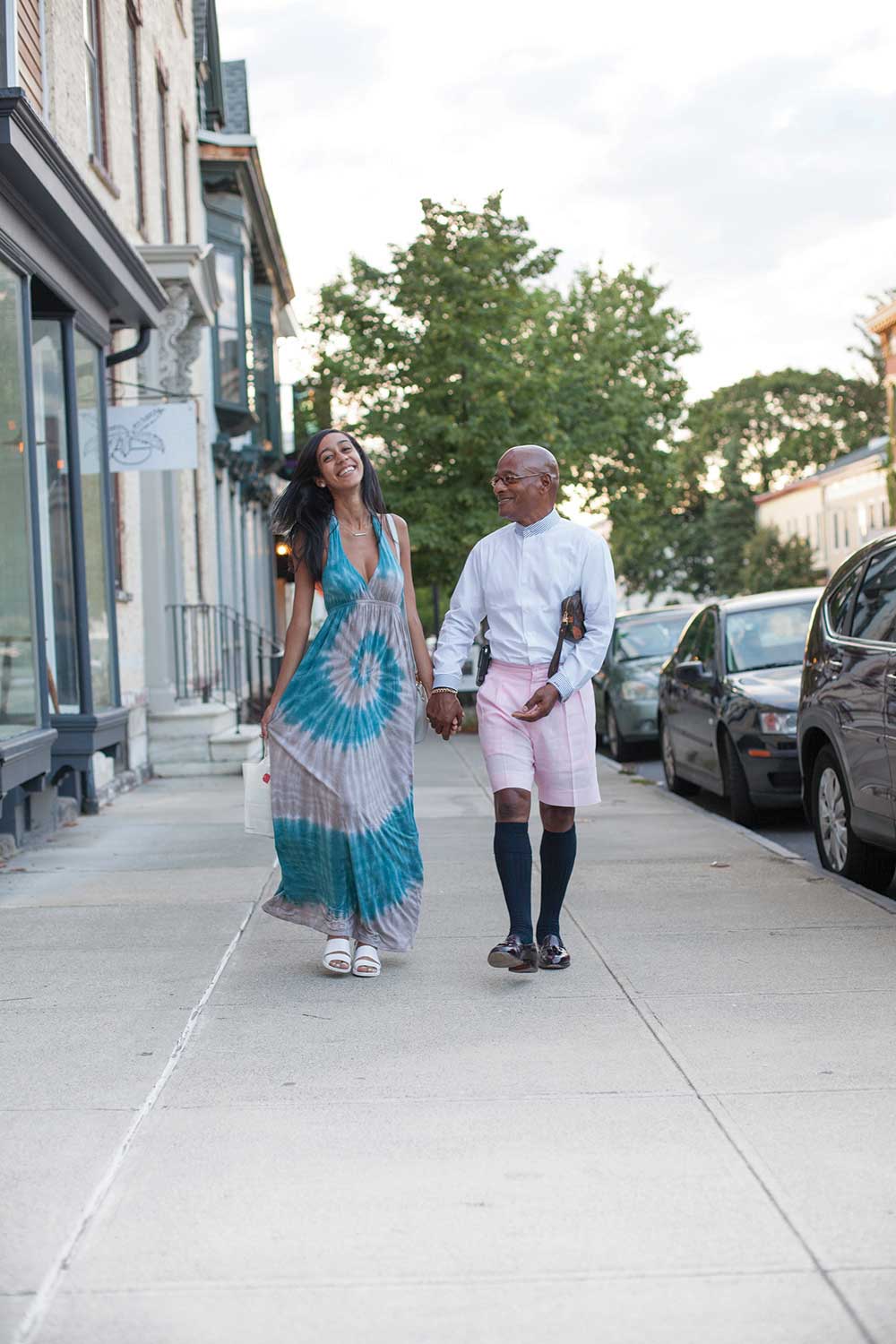 FRIDAY EVENING
For those born-and-bred New Yorkers who never bothered to learn how to drive (or people who’ve lived there so long they’ve forgotten how), Hudson is still within reach. Amtrak makes it from Penn Station to the western end of town in about two hours. Right near the train station is the cavernous Basilica Hudson (110 South Front Street), a performance space located in a 19th-century factory that offers film screenings, gallery showings, visits by such critically acclaimed bands as Godspeed You! Black Emperor, and the annual Basilica Soundscape Festival each fall. Just north of the station is Waterfront Park, which is the best place from which to view the Hudson-Athens Lighthouse. Following this full dose of combined bucolic splendor and urban chic, call a cab from Pronto Taxi (518-822-9500) or Hudson City Transport (518-822-8880) and head into town. 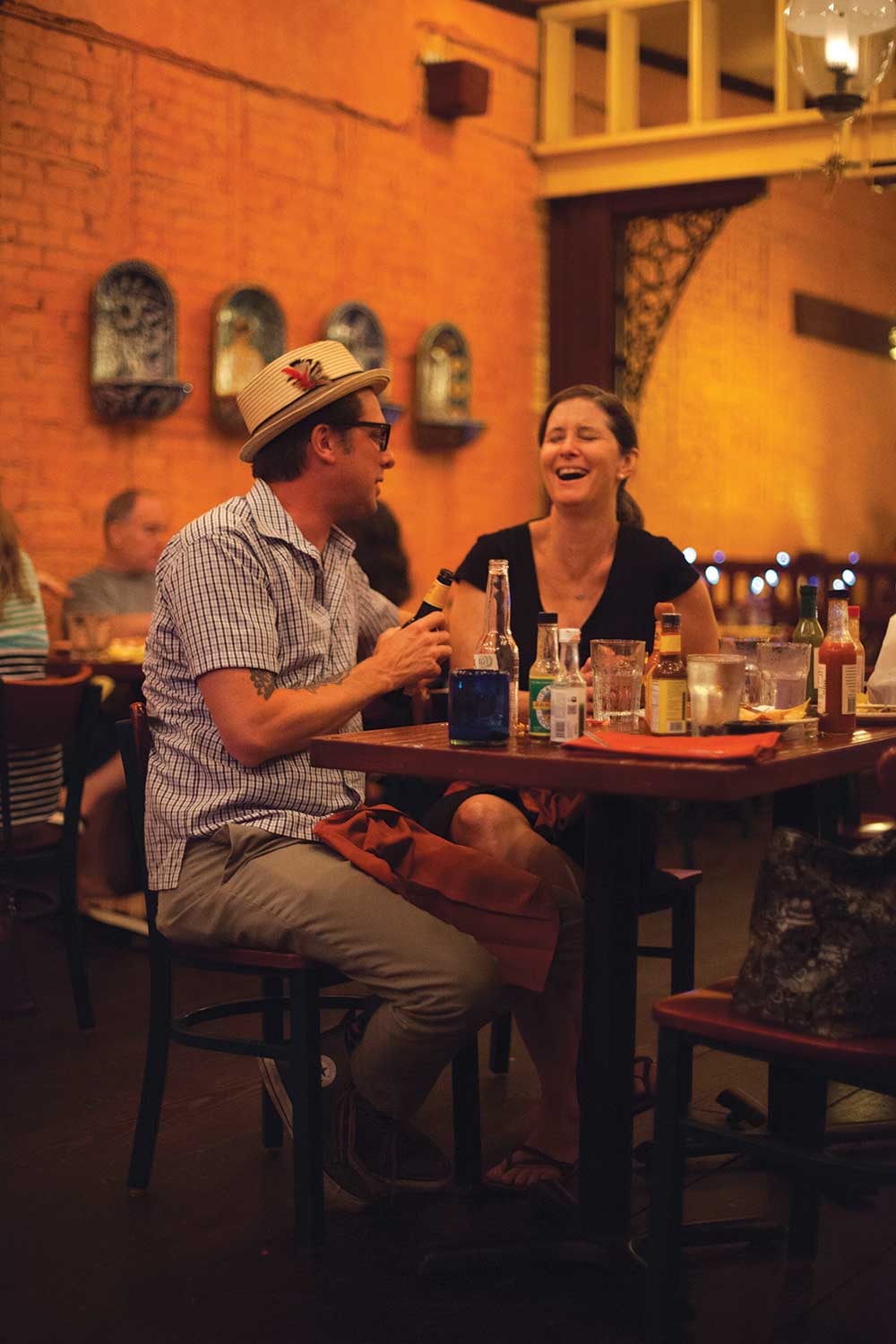 FRIDAY NIGHT
Check in at The Barlow (542 Warren Street), a boutique hotel conveniently located in the center of downtown, and head out to dinner. Several of the local restaurants have downstate connections. Beloved Manhattan institution Mexican Radio has had a vibrantly colored outpost at 537 Warren Street for years. Grazin’ (717 Warren Street), a farm-to-table restaurant in an old diner highlighting sustainably grown food and grass-fed-and-finished beef, recently opened a branch in Tribeca. And chef Zak Pelaccio, formerly of the boundary-smashing Fatty Crab, has brought his innovative touch to Fish & Game (13 South 3rd Street), featuring an ever-changing locavore menu anchored by homemade charcuterie. 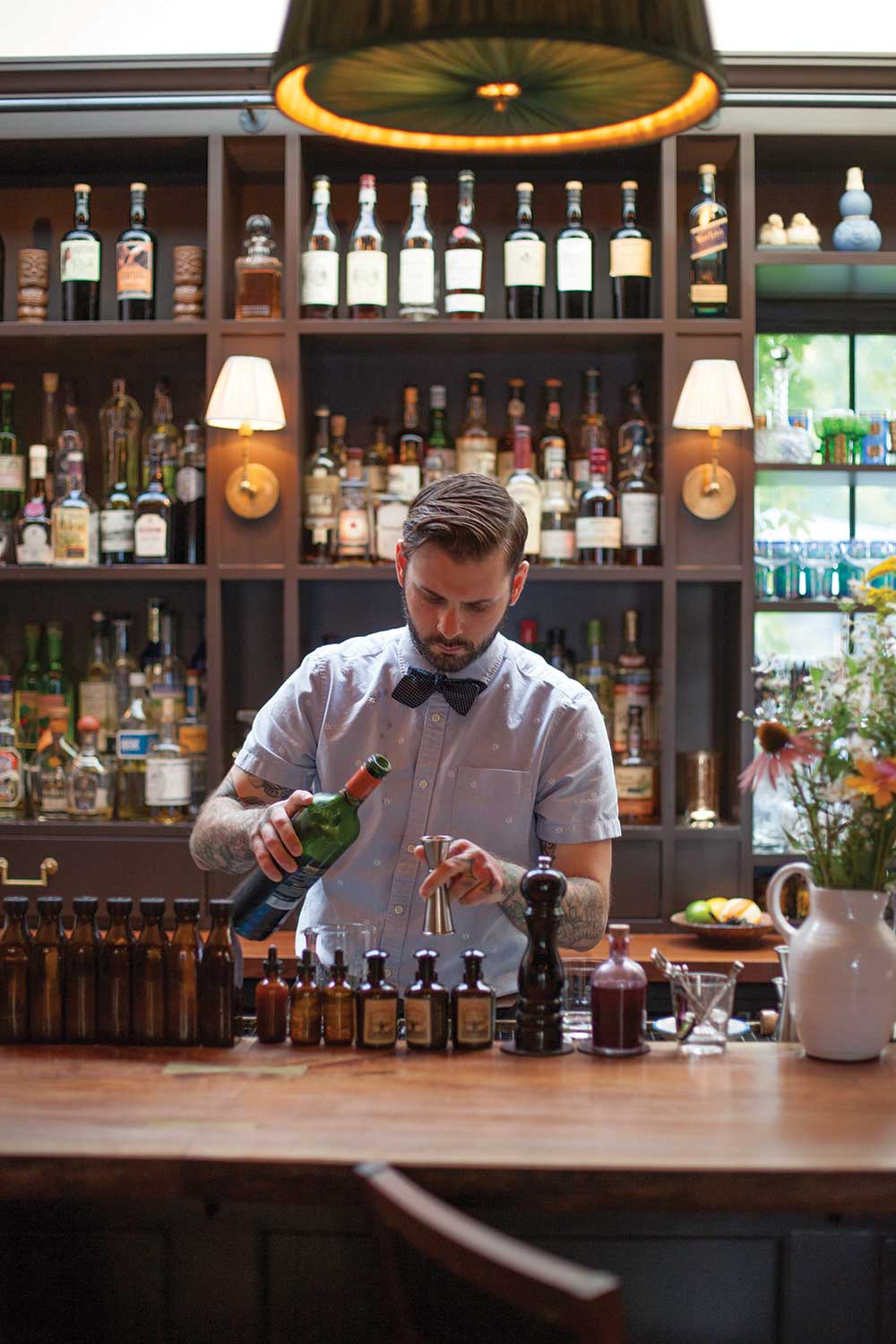 Innovation and exactitude are everything at Fish & Game

SATURDAY MORNING
Before a morning of hard-core antiquing comes coffee. So, to steel up for the hunt, head to Patisserie Lenox (504 Warren Street) for some of the Hudson Valley’s best cappuccinos and French pastries. There are plenty of vintage finds along Warren Street, but to cover the most ground the quickest, set up a base camp at the 300 block and check out Hudson Supermarket (310 Warren Street), The Hudson Mercantile (318 Warren Street), Furlong (320 Warren Street), and Warren Street Antiques (322 Warren Street). 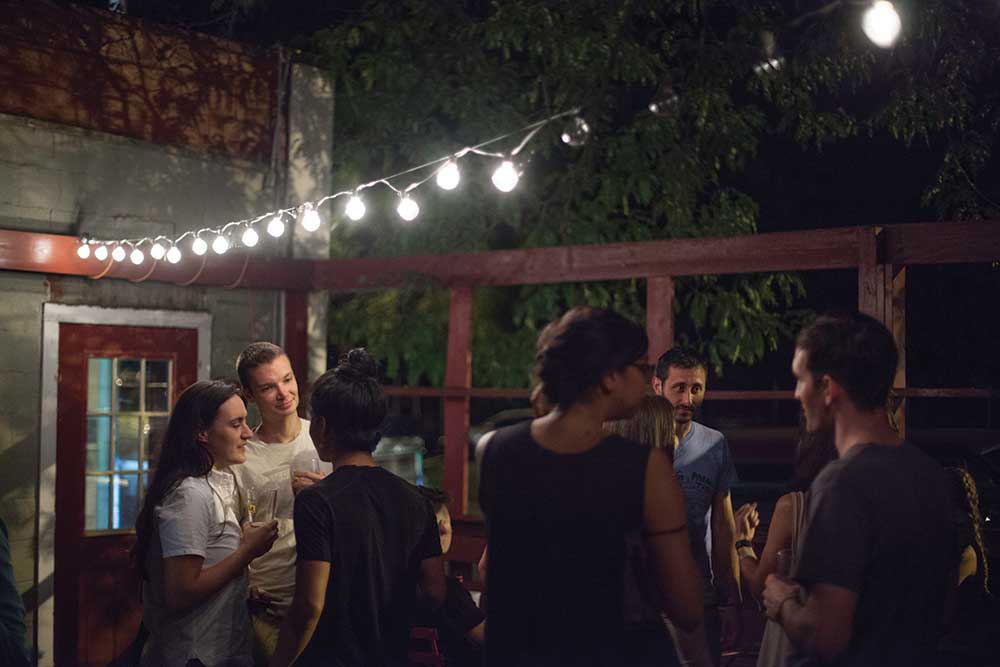 SATURDAY AFTERNOON
Most people don’t come all the way up to Hudson for pizza—at least not until they try Bonfiglio & Bread (748 Warren Street). Hudson, at some point during any visit, is all about shopping. Try FACE Stockholm for skin care (401 Warren Street), Finch: Life Curated for vintage and modern furnishings (613 Warren Street), and jewelry at Geoffrey Good Jewelry (238 Warren Street.) Or pick up a new bag to fill at the European-design clothing store De Marchin (620 Warren Street). Then wash it down with a local craft brew, a book of Jane Jacobs essays, and a “Goodnight Moon” T-shirt at Spotty Dog Books & Ale (440 Warren Street). Books, beer, musical performances, and readings! Why would anyone ever want to leave? 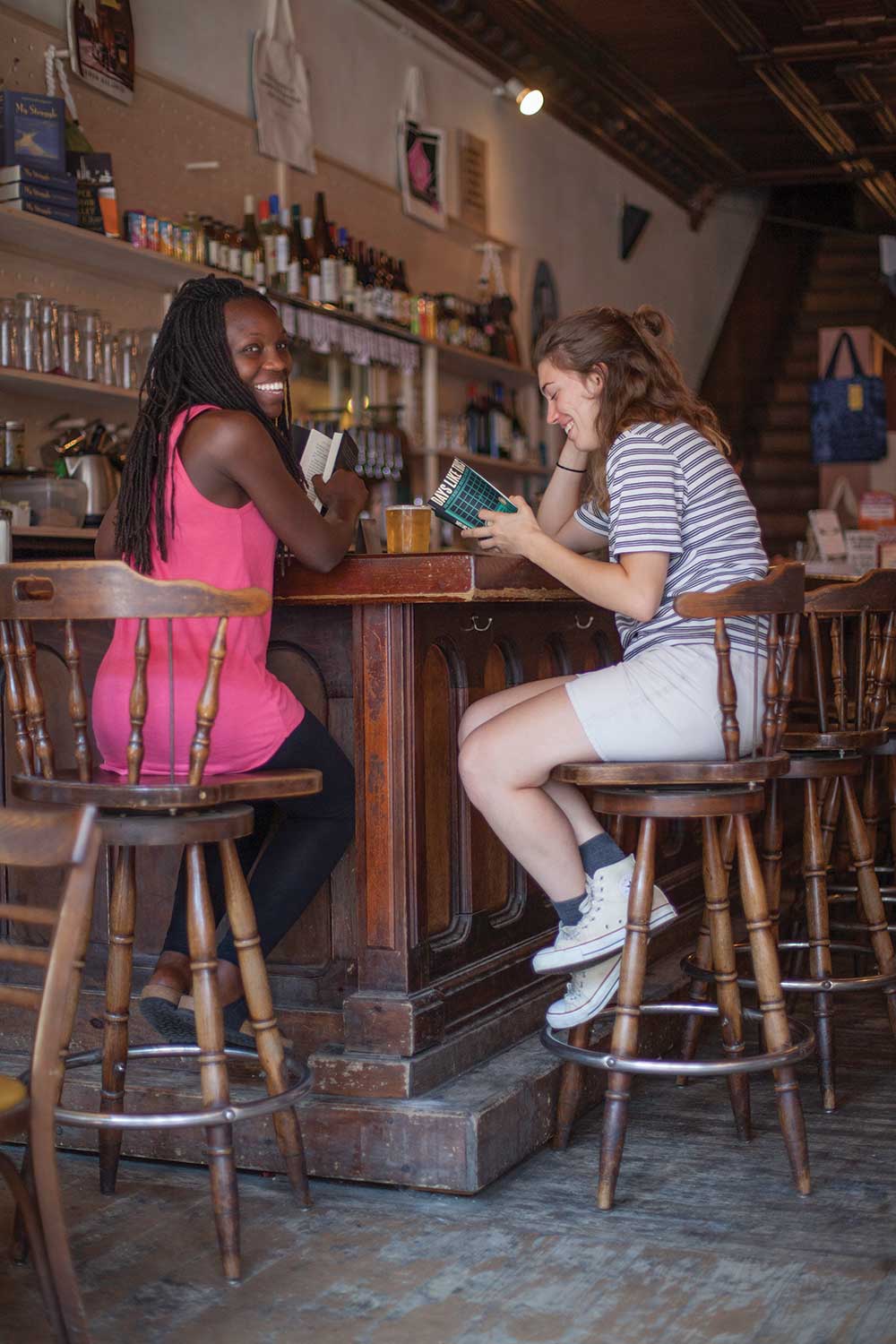 Beers and browsing at Spotty Dog

SATURDAY EVENING
But leave, one must, because eventually hunger always strikes. Grab a seat at The Crimson Sparrow’s indoor patio (746 Warren Street) and enjoy chef John McCarthy’s—a former disciple of Wylie Dufresne at wd-50—take on Japanese cuisine shot through with French highlights and buoyed by locally grown ingredients.

SATURDAY NIGHT
There’s only one way to end the evening: by dancing all of those newly accumulated calories away. Hudson’s live music scene is bustling enough that, for years, every August the city supported its very own music festival—the largest free outdoor music festival in the entire state. Get a taste of it by popping into such bars and venues as Club Helsinki Hudson (405 Columbia Street) and Half Moon Hudson (48 South Front Street) to experience local bands that play everything from experimental soundscapes to confessional folk to swinging Americana to down-and-dirty rock-and-roll. Breathe it in deep and don’t stop rocking until they kick you out. 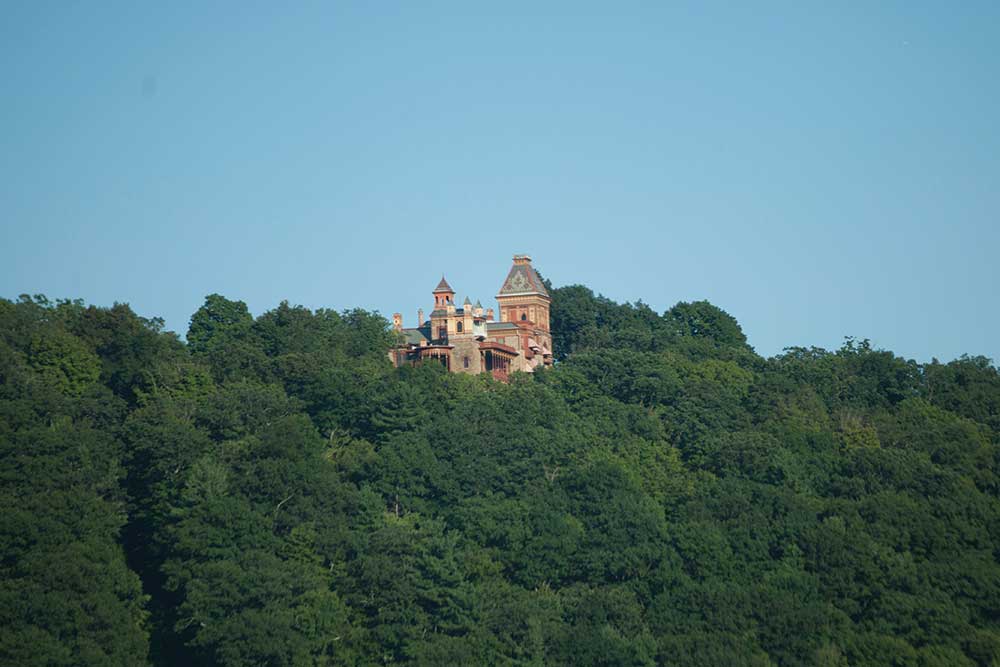 SUNDAY MORNING
Coffee. Stat. Café La Perche (230 Warren Street) will start Sunday off right with a good cup and breads baked in an oven that the owner brought over from France. Once you can open your eyes fully,hit the gallery scene. Carrie Haddad Gallery (622 Warren Street) paved the way for the revival of Hudson’s art scene when it opened its doors back in 1991. BCB Art (116 Warren Street) features contemporary artists, but it’s been known to have a Warhol or a de Kooning lying around. The Limner Gallery (123 Warren Street) is a reliable bellwether of what’s to come: It opened on East 10th Street in the ’80s as the East Village art scene took off. Then its owners moved to Chelsea as that scene took off. Limner is now in Hudson, along with acclaimed Time & Space Ltd. (434 Columbia Street), an experimental theater/cinema/gallery and venue for classes and public lectures in the arts and politics that’s been going strong since 1973. Meanwhile, world-famous performance artist Marina Abramovic is repurposing a 33,000-square-foot former indoor tennis center to house the nonprofit Marina Abramovic Institute as “a high temple to long-duration work in performance and other arts,” as the New York Times put it. So if the presence of such luminaries doesn’t prove that Hudson’s art scene is on the cusp of something big, well, then… nothing ever will. 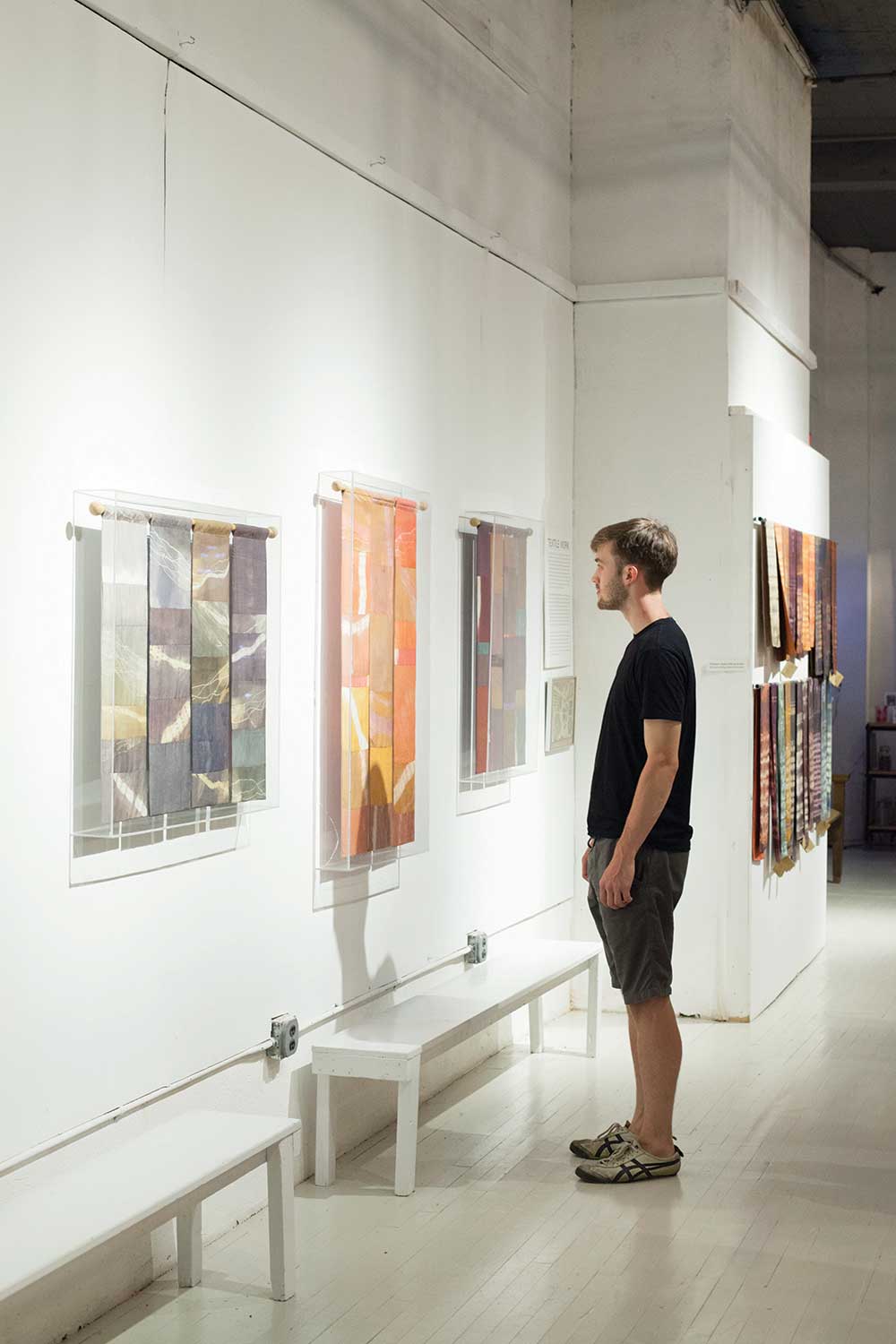 SUNDAY AFTERNOON
Knowing now what the future of American art looks like, go ahead and step back into the past. Hail a cab and head out of town to Olana (5720 Route 9G), the historic home of Frederic Edwin Church, one of the major figures of the Hudson River School of painters. Olana’s 250-acre estate features not only Church’s home and plenty of his works but also an impressive collection of artifacts from his travels around the world. And the estate’s five miles of hiking trails offer stunning views of the valley, the river, and the Rip Van Winkle Bridge. Sitting on one of the many rustic wooden benches stationed at the trail’s scenic viewpoints, watching the sun dip low over the river and rolling fields, is the perfect way to bring a weekend in Hudson to a contemplative close.