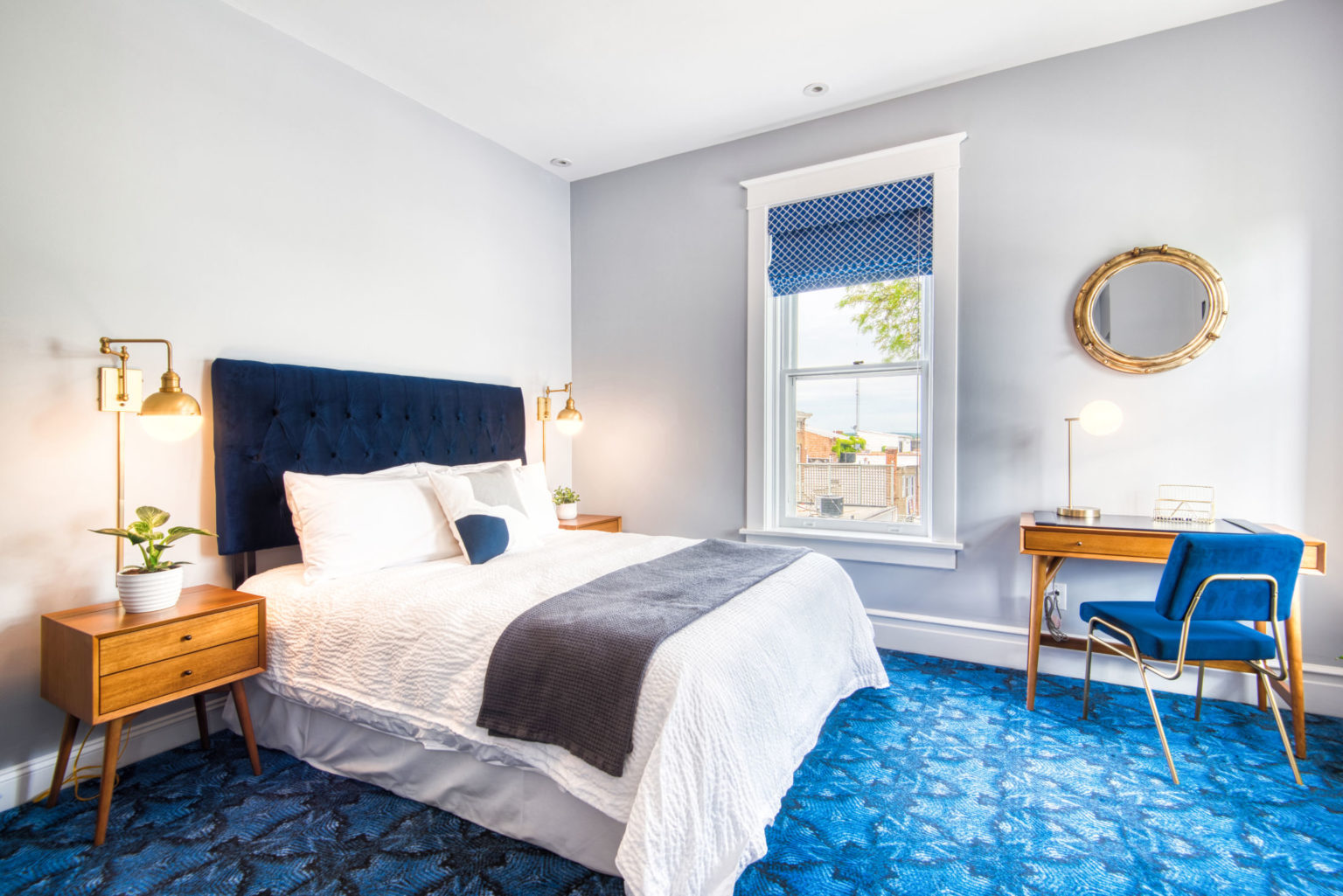 The Hudson Whaler Hotel, located in the heart of downtown Hudson, is a nod to the town’s history. The lobby, modeled after a ship captain’s quarters, features a wraparound handpainted mural of the Hudson River resembling an old parchment map. The hallways are deep nautical blue, and the suites are a soothing combination of cool colors—light blues, grays, and whites. Handcrafted ornate woodwork can be found throughout the interior—in the three-level staircase, windowsills, and fireplaces. When restoring the hotel this year, Hudson Whaler owners Michael Glickman and Ben Rinzler let the design process be guided by the question: “How can we bring to light, as a conversation piece, that Hudson was a whaling town?” 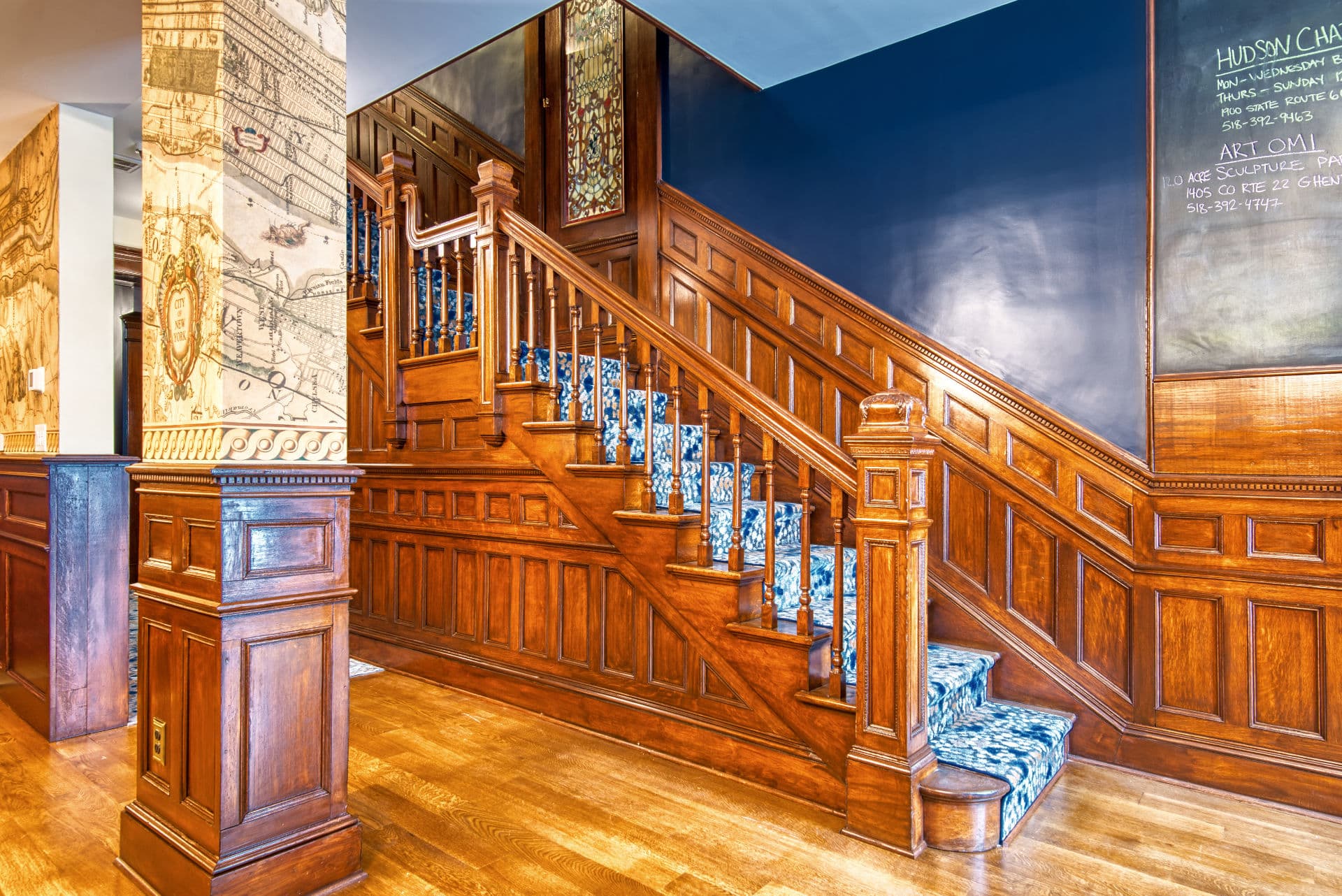 Hudson was, in fact, one of the most important whaling towns in the country until the 1840s. Called “Claverack Landing” at the time of the Revolutionary War, in Colonial times it was a 10-family town 100 miles from the ocean––not the first place you’d pick as a center for the whaling industry. That role was taken up by the port towns along the New England coast, but when the Continental Congress voted to suspend trade with England in 1774, the British systematically attacked those ports and their ships. Looking for a safe inland port, whalers moved to Hudson in 1783, 117 miles upriver from the Atlantic Ocean. 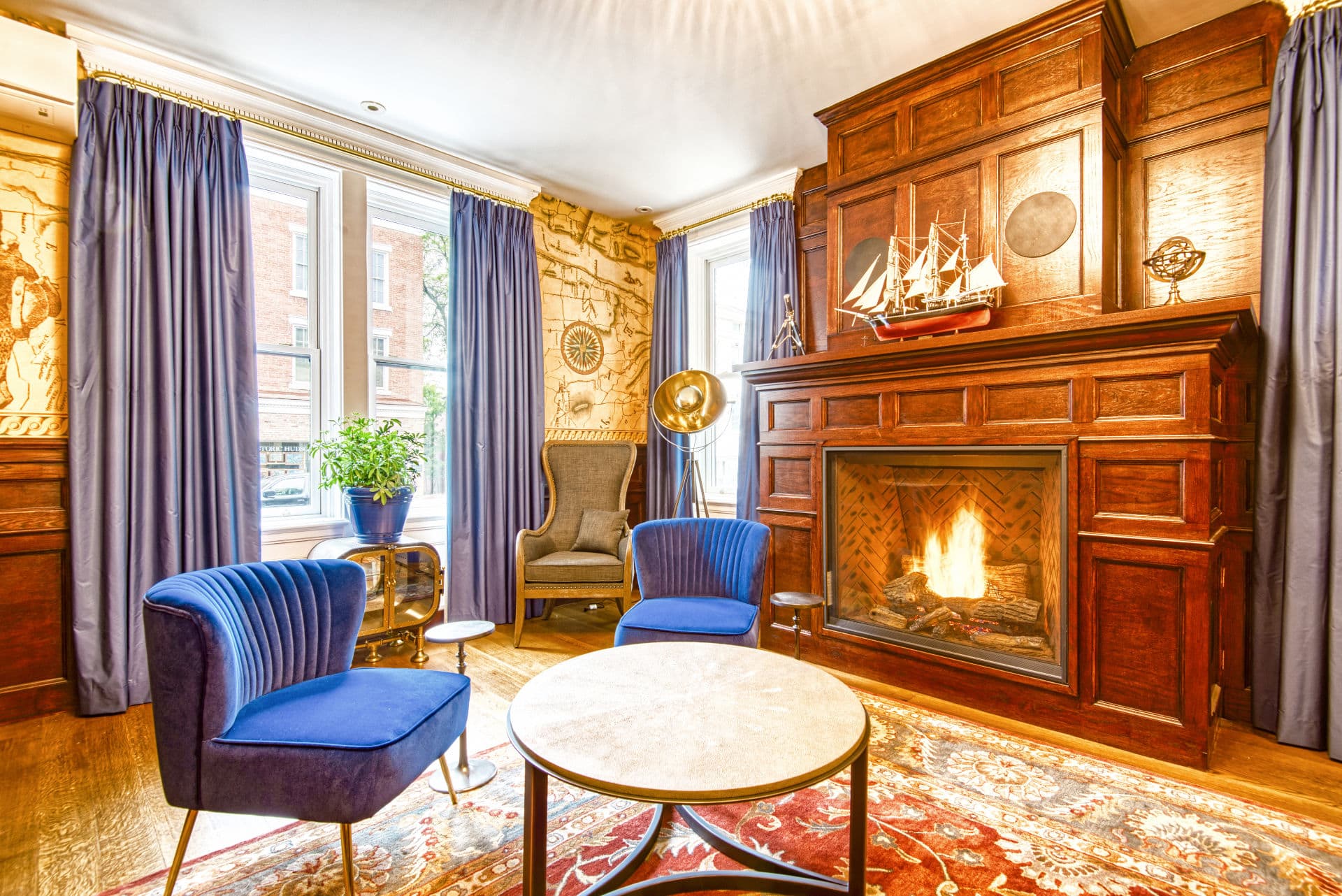 Every street sign in Hudson is marked with a small whale logo, but Glickman and Rinzler were hard-pressed to find any other echoes of Hudson’s whaling history. They decided to reflect that history in the name of the hotel and “gently integrate a nautical theme” into the interior, per Glickman. 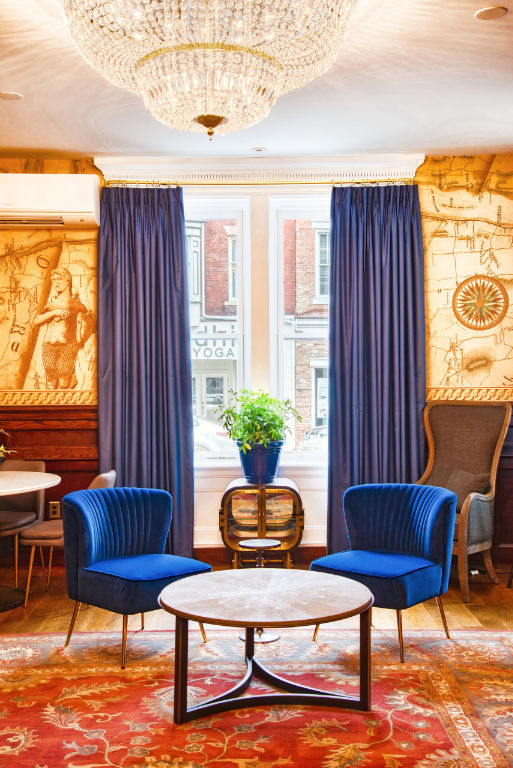 The 16 suites of the Hudson Whaler each have a vintage brass porthole on the wall and a fireplace with a ship mural around it. A small handmade chocolate whale can be found in each guest’s room upon their arrival, made by local century-old chocolatier Vasilow’s Confectionery. 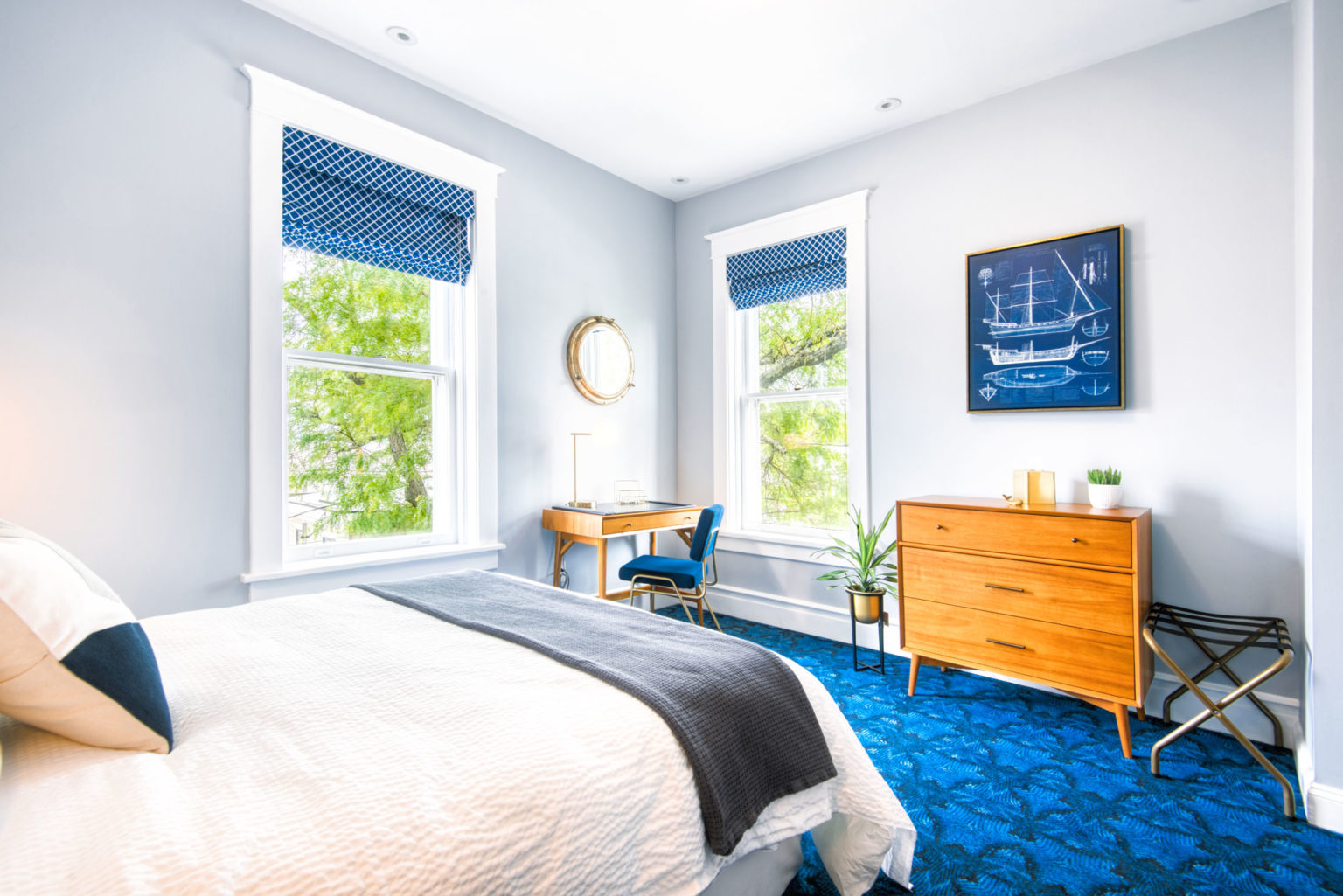 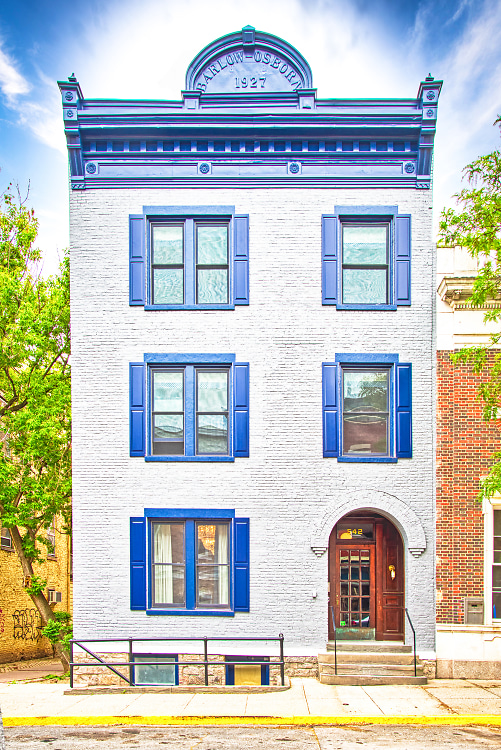 The building of the Hudson Whaler is also a centenarian, but its current look is the result of intensive changes, all intended to facilitate a maritime feel. “It’s a gorgeous building—the bones of it,” says Rinzler. “It has great historic elements, which we’ve painstakingly restored.” He and Glickman kept all the period-specific elements that they could, which ended up only being the bare walls and the staircase and banisters. They preserved the building’s historic integrity during the restoration, for which they installed period-appropriate wood floors and paneling, custom fireplaces with ornate trim, and chandeliers. 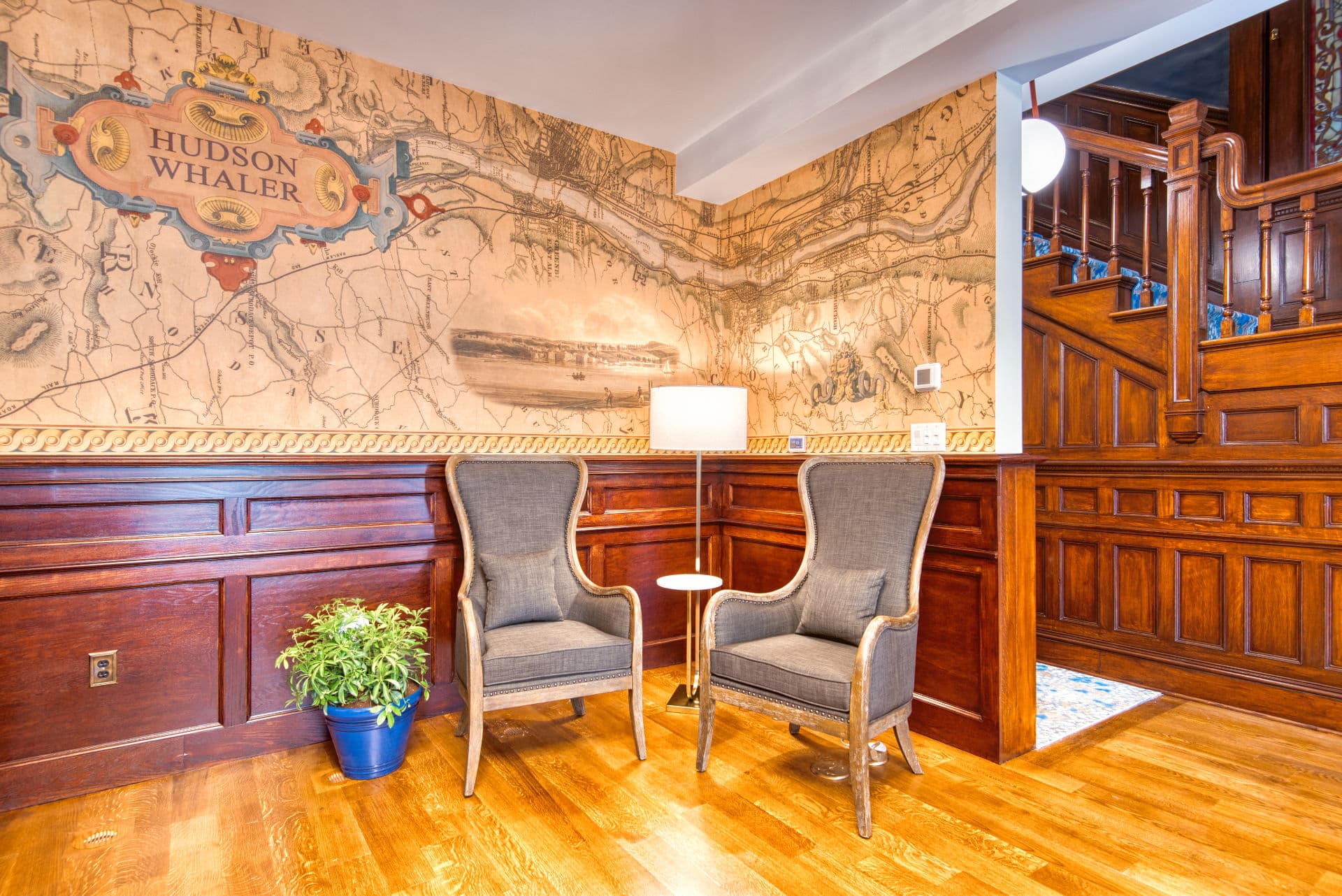 Rinzler, whose entire career has been in real estate, is no stranger to renovating and managing buildings. He was brought to Hudson by Glickman, who had been visiting the town for four years, in a search for a project to take on together. “We put our heads together and stumbled across this opportunity with a 16-room hotel,” Glickman says. “We pulled the trigger and have been lovingly working on it since we closed on the property in February.”

Before the renovation of the Hudson Whaler, Glickman had purchased a weekend house in Hudson, and started renting out its basement apartment on Airbnb. It was immensely popular and received raving reviews, helping to get Glickman’s feet wet with the hospitality business and revealing to him “the tremendous demand in Hudson.” 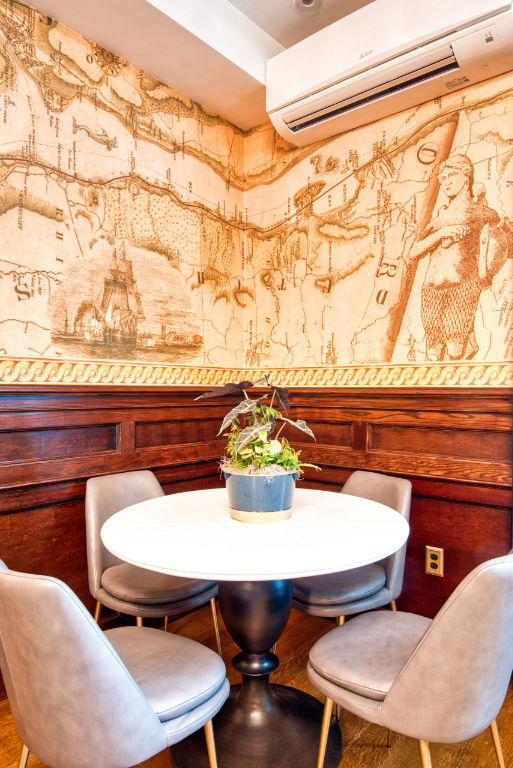 Now, both Glickman and Rinzler have other hospitality properties in town in addition to the Hudson Whaler, boutique hotels called The Mariner and The Nautical Nest respectively, a continuation of their spotlight on Hudson’s whaling history.

“Our attention to detail is going to stick with our customers,” Rinzler says of the Hudson Whaler. “We want their experience to be perfect. Every inch of the place has been redone, redesigned, and customized to people having an amazing experience staying there.”