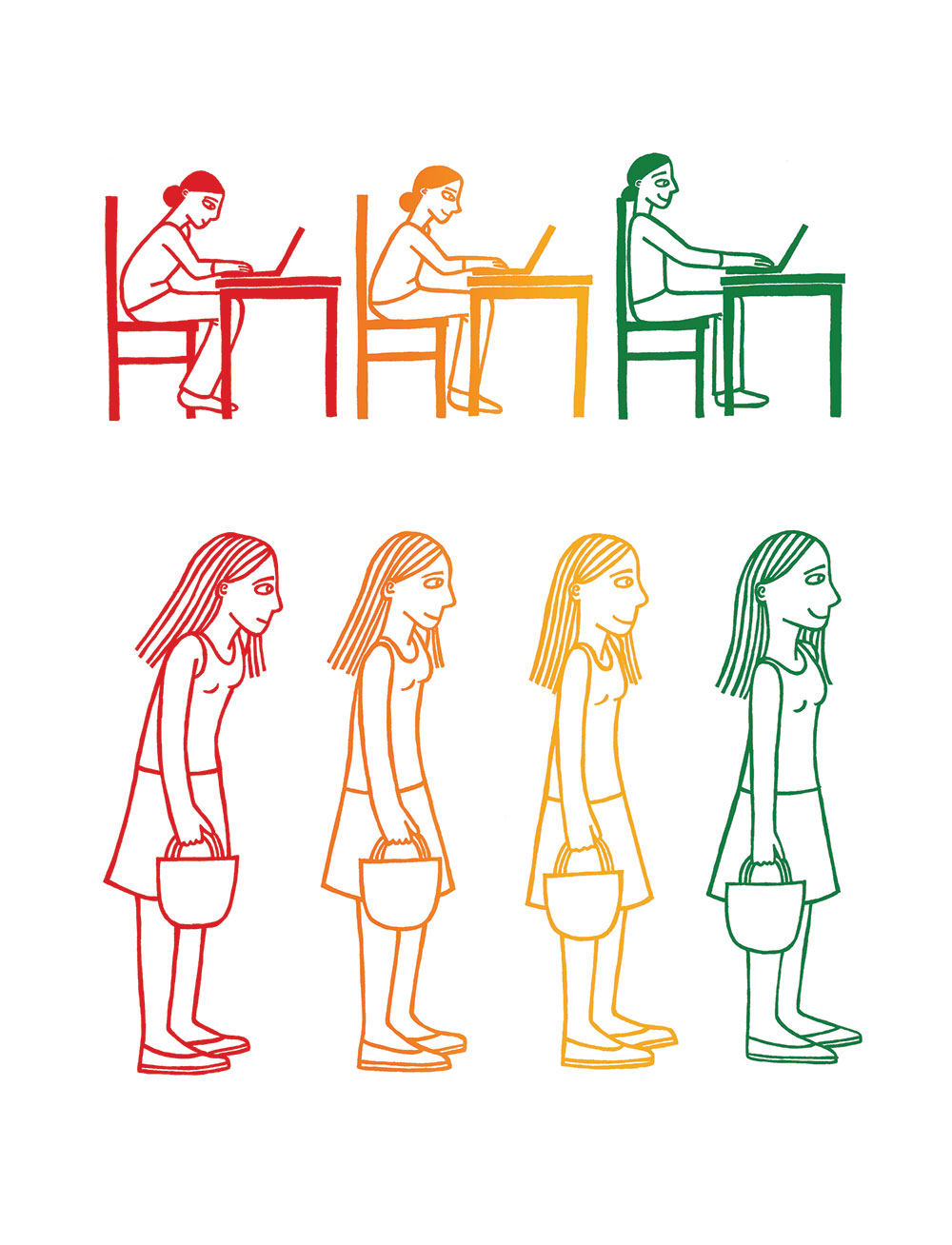 To have a body is to experience physical pain one day: There is no getting around that pesky inevitability. The longer we have our bodies, the greater the chances are that aches and pains will begin to inhabit our limbs and joints like unwelcome guests. Blame it on wear and tear. Blame it on entropy. Blame it in on the curses and blessings of having a physical body.

For Katiellen Madden of High Falls, the time came two years ago when she could no longer manage the neck pain that had dogged her for a good part of her adult life. She had been a gymnast as a kid, and in her grownup career as a special education teacher she had trucked a few 10-pound teacher’s manuals back and forth to school each day, tugging on her shoulders. The long-term effect was pain that intruded into daily activities like driving or gardening, or making art at the Women’s Studio Workshop in Rosendale, where she worked in printmaking and papermaking. It also interrupted a good night’s sleep. “I was constantly in and out of physical therapy,” says Madden, 66. “It would help for a little while and then the pain would come back. One year, I looked at how much money I had spent on Advil and I was shocked. I also kept hearing about the bad effect that Advil can have on the kidneys.”

Around this time, Madden stumbled upon an article that recommended either acupuncture or the Alexander Technique as a way to find freedom from pain. “I’m terrified of needles, so acupuncture was out,” she says. Through a center in New York City, she found Alexander Technique instructor Allyna Steinberg, who teaches private and group lessons in Manhattan and Stone Ridge. Steinberg met with her for one-on-one sessions, gently guiding Madden through ways to realign her body and release tension in her neck. “After the first session, my range of motion increased dramatically and a lot of the pain was gone,” she marvels. Through subtle tweaks to her everyday movements, and the occasional hands-on adjustment from Steinberg, she was teaching her body to let go of old patterns and to move as it was meant to do. “After less than six sessions with Allyna, I wasn’t having any more pain in my neck at all.” Without popping an Advil, she was able to sleep through the night, and she enjoyed the bonus effect of feeling more relaxed in general. “I’m not a great student,” she demurs. “I just really love the process and I love the results. I keep telling my friends all about it.”

A Movement Modality with Ripple Effects

If there’s one thing you might have noticed about the Alexander Technique—a century-old practice that teaches people to release muscular tension and adverse habits of movement and thinking—it’s that those who have benefited from the method are downright evangelical about it. Research studies to prove (or disprove) its effectiveness are not robust, although a systematic review of 18 clinical trials, published in the International Journal of Clinical Practice in 2012, found strong evidence that the Alexander Technique can relieve chronic back pain, moderate evidence that it helps with Parkinson’s-associated disability, and preliminary evidence that it may be effective for general chronic pain, posture, speech impediments, respiratory function, and improvements in balance for the elderly. Many of the technique’s most ardent fans are performing artists and musicians; its Australian founder, Fredrick Matthias Alexander, was a Shakespearean actor himself.

A little over 100 years ago, Alexander developed the technique as a way to cure himself of a problem that was ruining his career: He kept losing his voice onstage. With no medical reason for his intermittent voiceless episodes, Alexander found that he could get his speech back by recognizing and releasing habitual reactions in his movements, and eventually in his thoughts as well. Using multiple mirrors (Alexander was a patient man), he observed himself speaking and noticed a habit of drawing his head back and down when he spoke. He recognized this as a startle response, common in most animals when faced with negative stimuli. Through practice, Alexander learned to release that startle response, inviting his neck to be free and his head to balance in alignment with his spine. In the process he freed his voice to emerge full-throttle on the stage. In essence, he developed a mind-body healing modality before such an approach came into vogue. Today, with mind-body therapies everywhere, the Alexander Technique is having its moment in the sun.

The kind of positional change that Alexander explored is not about forcing the body to do something new, which only creates more tension. Rather, it’s “an invitation or a wish for the body,” explains Steinberg. “You’re focusing on the ease of your neck and your whole body, and the relationship of the skull on top of the spine. So you’re focusing on good posture and good alignment throughout your body. The Alexander Technique offers a very integrative approach to movement. The idea is to invite peak performance by moving with awareness of the whole body.”

Like Madden, Steinberg also came to the practice seeking relief from constant pain. When she was in graduate school for public health in 2000, she developed a debilitating repetitive strain injury; the culprit was a bad computer workstation. Typing had become so painful that she was looking into voice recognition software to write her papers. Then she discovered the Alexander Technique. After taking private lessons twice a week over the course of a few months, the pain lessened and eventually resolved completely. “It was something I continued to do on occasion, even after my pain went away, because it felt so good and my posture improved,” she says. “People would comment on it, which was exciting. I also felt less anxious.” After she returned to the Alexander Technique a few years later to solve a new problem—foot pain that couldn’t be managed with orthotics—Steinberg delved more deeply into the method and trained to become a teacher.

“I hear from a lot of people that they come to the Alexander Technique for one thing, and then they discover a lot of unexpected benefits. So they stick with it,” she says. The same was true for herself: One bonus was that the Alexander Technique helped her with a new passion: salsa dancing. “My body could start to move in that whole-body Cuban way, so it allowed me to be a much better dancer.” Steinberg even credits the practice for helping her blossom at her day job in public health. “I got a promotion at work, and I think that’s partly due to the change in my posture, presence, and vocal clarity. It also helps you regulate your emotions, so you come across as more confident.”

Letting Go as a Path to Health

Musicians use it to prevent or treat repetitive strain injuries from hunching over an instrument. Singers call on it to free the breath and unleash the natural power of the voice. But Elizabeth Castagna, an Alexander Technique teacher based in Beacon, came to the method for an unusual reason: She wanted to get pregnant. “It was taking a long time, and I was scared. I was very frustrated and confused,” she says. “A friend of mine who’s a dancer in New York City said, ‘Go to Chloe Wing. She teaches the Alexander Technique, and she’ll help you.'” From her first session with the illustrious teacher (Wing passed away in 2013), Castagna was hooked, and she soon started the three-year training to become a teacher herself. She believes that the Alexander Technique, along with nutrition therapy and acupuncture, helped her finally get pregnant during her last year of training.

“There was nothing medically wrong with me, just as there was nothing medically wrong with Alexander when he lost his voice onstage,” she says. “There was just something getting in the way. The Alexander Technique is this very subtractive process where you do less, and you begin to feel better.” As Castagna got more in touch with her body and with movement, things began to shift. “It took me out of my fight-or-flight response. That’s the Alexander Technique at its essence: It helps you find your neutral. My nervous system was feeling clearer; I became happier and freer, and I was able to make better decisions. All the worry I had and the fear—all of that impacts the health of your body and how you feel.”

Today Castagna teaches both adults and children, with a mission of bringing the Alexander Technique into the classroom. Along with a colleague, Sophia Jackson, she teaches kids at the Randolph School in Wappingers Falls, which her son attends. “[Jackson and I] have children the same age, and we kept hearing people say, ‘Gosh, I wish I knew this stuff when I was a kid.'” Their classes at the Randolph School, for kids ages 5 through 11, teach body awareness through movement games, body traces, and experiential anatomy. “The younger children learn about the skeleton and spine, and how their body is designed to move. The older kids keep a body awareness journal. It’s really fun and interactive, and the kids learn to talk about their bodies in a new way.” The mind-body aspect enters into the lessons too, as the children begin to connect their emotions and thoughts to the way their bodies feel. “If you help a child or anybody to pause, count to five, and ask their bodies to feel a little less tense, then as their body tone changes, their emotions start to change too.”

The technique also speaks to the current trend of neuroplasticity in medical research today. “Alexander said that underneath every habit there is a belief,” says Castagna. “You can look at the belief and ask, ‘Is that still serving me?’ If the answer is no, then you’ve already begun to weaken your habit. You don’t have to break the habit; you just don’t do it. As soon as you don’t do it, you’re in a new place, and a new neural pathway is being formed in your brain for a new choice.”

Recently, Madden had been driving back and forth to Connecticut to care for her dying mother, and her neck pain suddenly returned. Remembering the tools that Steinberg had given her, she was able to release the caught tension in her neck. “I focus on relaxing the front of my neck whenever I start feeling stressed or am in a potentially conflicting situation,” she says. Not only did her neck pain resolve quickly, but she was able to handle a difficult situation with greater presence and ease.