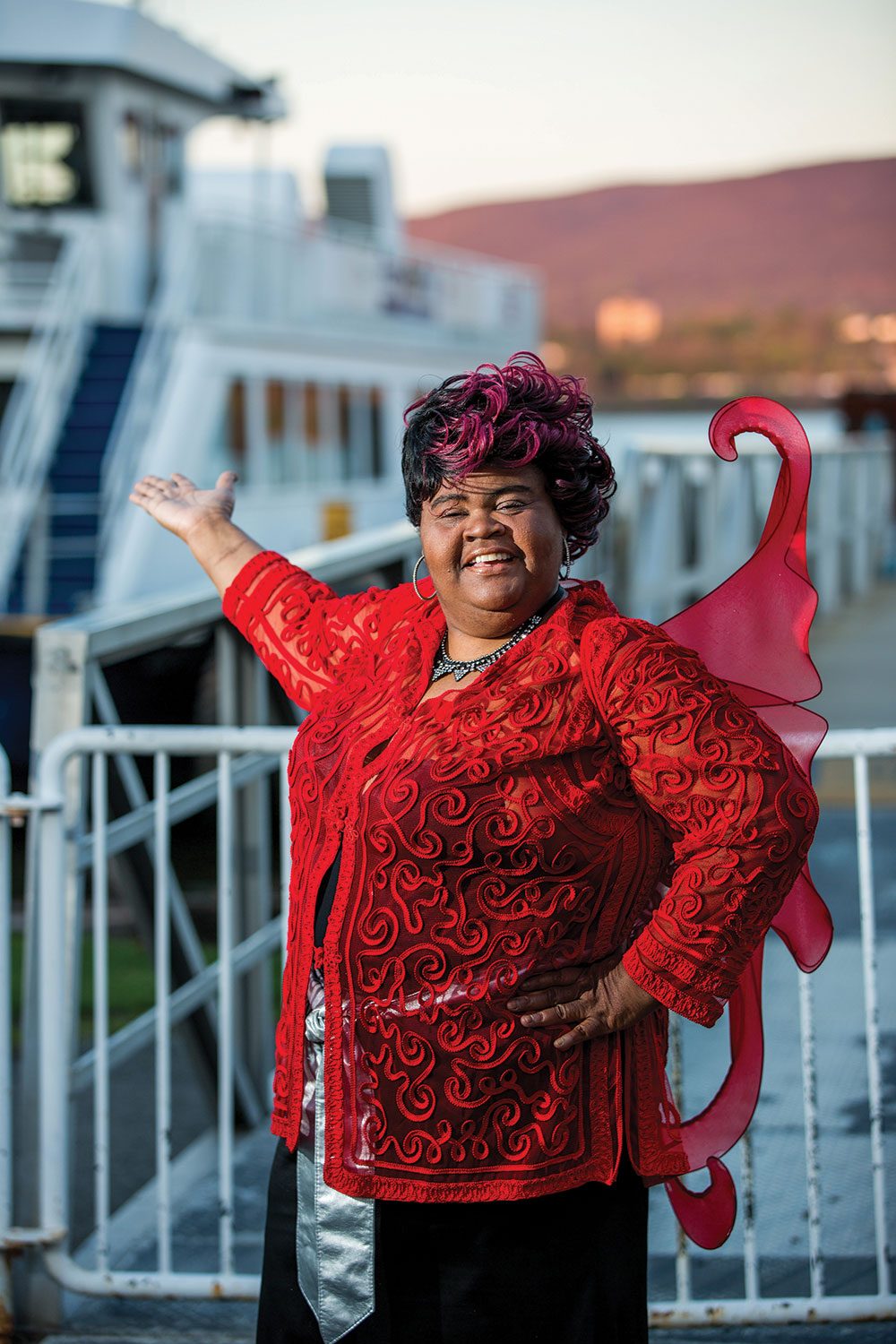 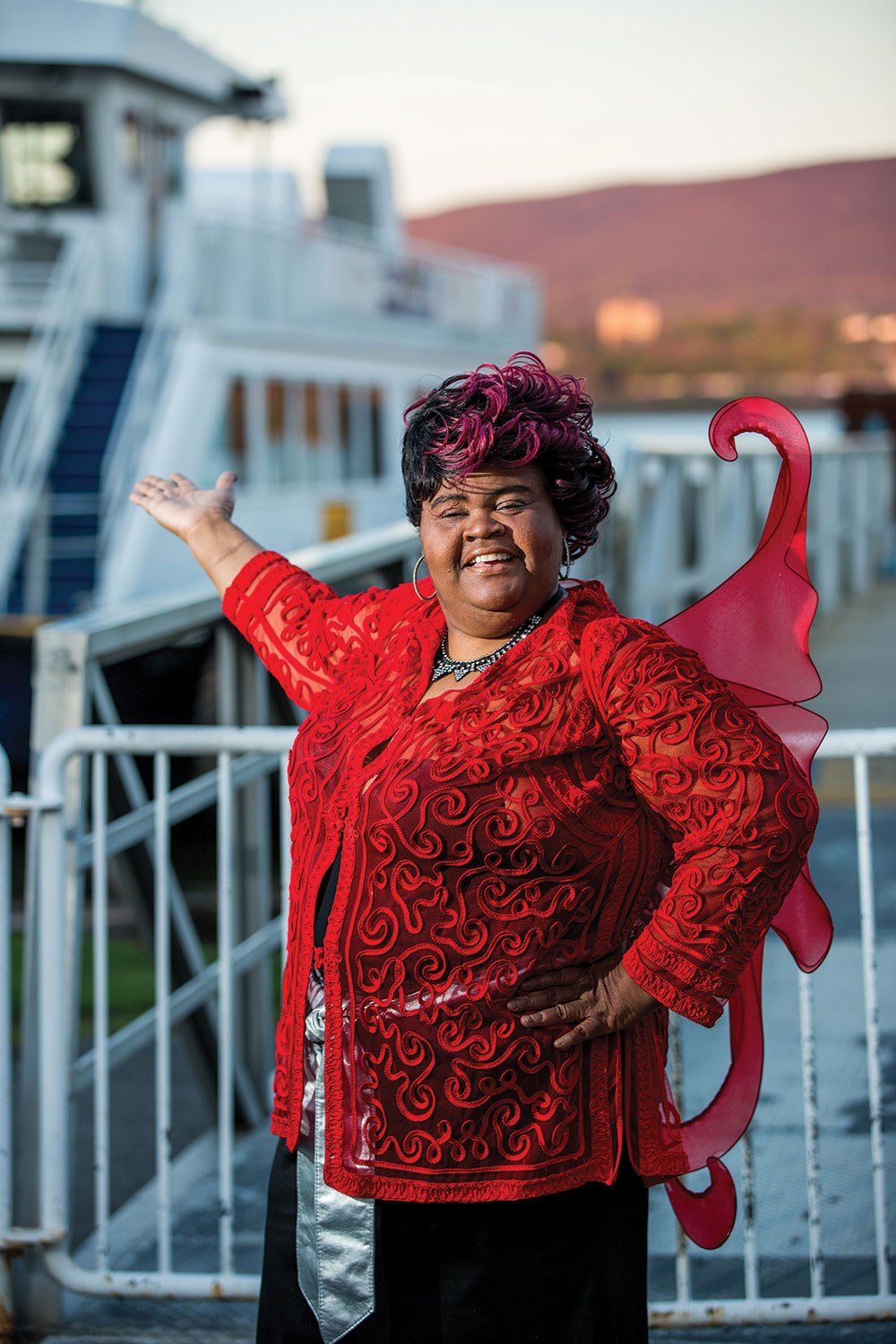 HOMETOWN: Harlem
MOVED TO HUDSON VALLEY IN: 1997
LIVES IN: Newburgh
GREATEST IRONY: Although she organized Christmas caroling on the Newburgh-Beacon ferry, she never sang herself. “Trust me,” she says. “You don’t want to hear me sing.”

Newburgh needed help. Well, that’s probably an understatement. The old Orange County city is as plentiful in its potential, architecture, and sweeping Hudson River views as it is in festering problems. Drugs, crime, unemployment, tax-base contraction, yadda yadda yadda—you’ve heard it all before. Growing up in Harlem, Aquanetta Wright certainly had. So, having transplanted herself in Newburgh, she decided to do her part.

Wright moved up from New York City to New Windsor in 1997, and then started what is believed to be Orange County’s first LGBT organization, the Rainbow Elite. “There was a big issue happening with the Boy Scouts at the time,” Wright recalls, and she felt her community lacked representation.

Soon enough, she found herself owning property and getting deeply involved in local politics in Newburgh, where the first female black mayor, Audrey Carey, had been elected in 1991. In 15 years, during which Wright recognized the same issues of urban blight she had witnessed in Harlem, she missed just three city council meetings.

But Wright never actually ran for a seat on the council, and was beaten by the incumbent the one time she campaigned for county legislator. While serving on various committees and commissions, Wright figured her best chance of making a contribution lay elsewhere. “We all have a role to play, in my opinion, in how we’re going to help support change,” she says. “While the city was doing what they did, while the city council talked about infrastructure and housing and jobs, I could do two things well: talk and connect.”

Wright had spent more than a decade working at the YMCA in Manhattan, organizing events and fundraisers. So when the Newburgh-Beacon ferry resumed service in 2005, she seized the chance to begin putting on community events. On the landing, she began holding art shows, music concerts, and even Christmas caroling sessions.

Soon enough, the ferry captain gave her a nickname: the “Ferry Godmother.” “The name sort of stuck,” says Wright.

The ferry events were such a success that, in 2007, Wright began an ambitious jazz series on the Newburgh waterfront at Unico Park. The motive wasn’t entirely altruistic, though. Wright, who owned an art gallery in Newburgh at the time, had a closet full of gowns and nowhere to wear them. In a small way, her sartorial challenge begat the concerts. But that was hardly the biggest factor. “I felt that we needed something that would put the City of Newburgh on the map in a positive way,” she says.

That she did. That summer, she put on 17 free jazz concerts—small ensembles on Wednesdays, big bands on Thursdays—drawing an average of 400 people, with some acts pulling in over 1,000.

People from all stripes of life began showing up in Newburgh, from as far away as New York City and Albany. Sponsors and partners covered costs and some booths sold handmade artwork. But the jazz series didn’t just bring in people from outside of Newburgh. Just as important, the events connected a somewhat divided city. A lot of locals never went to the waterfront—the train bridge forms a physical barrier of sorts. “A lot of people felt disconnected from the waterfront,” Wright says. Not all Newburghers can afford the restaurants on the other side of the tracks, which caters mainly to tourists.

But the concerts gave everybody a reason to cross the boundary and enjoy a show together. Wright’s efforts made Newburgh a musical destination; the average attendance has been steady at some 500 spectators per concert since, and the music series has expanded to include pop, rock, and doo wop. In fact, even though the series moved to the Arboretum at Thomas Bull Memorial Park in 2011 (due to parking issues by the waterfront), attendance remains strong.