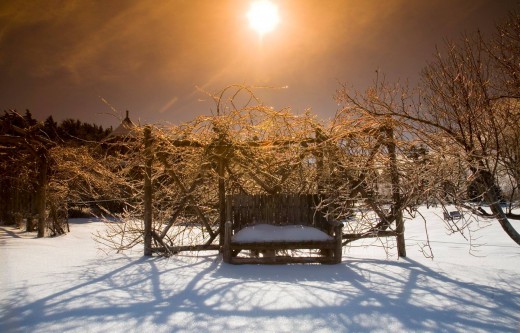 Given the 15 degree overnight forecast, leafing through seed and plant catalogues might be a premature reverie. A layer of frozen snow covers the ground. Spring thaw is months away. But these catalogs arrive by snail mail (do they not burrow underground, those snails?), and I am forced to dream into the future. Days of casual planting and weeding and lounging in the late twilight drift into my consciousness. Warm afternoons of watering by hand and plucking Japanese beetles off beans to send them into their next incarnation and nights of crickets and peeping tree frogs—all are sweet memories of last summer occupying my mind.

But who am I kidding? It’s January out there, with temperatures reluctantly moving anywhere but down and especially not into spring. We still have February and March to endure.

So, here’s the thing: Stop thinking about it. Ignore the fact that you want to grill fish on the infrared apparatus on your frigid back porch so as to minimize the smell in the kitchen. Suck it up and throw that baby into a hot skillet on the stove. Stoke the fire in the living room, and wear thick socks around the house. Cook vats of hearty soup. Bake sweet breads for breakfast and don’t worry about the smudge on your windows or the gobs of dust along the floorboard. (Spring cleaning will come way too soon.) Imagine a full and froth-some garden someday, but don’t sweat it for now. Warm weather will return as surely as an annual case of hay fever, and there is plenty of time to brace for that.

Meanwhile, watch the weather report for days you can sneak out safely to frolic in the ice and snow. Scandinavians do it. So do Minnesotans. Surely we Upstaters can endure a little chill in the air. Here are some Hudson Valley winter wonderland treats to indulge in: Ice skating at Mohonk. Shopping the indoor farmer’s markets. Sledding on the hills of the great estates along the river. Skiing, snowshoeing, hiking the white trails of the Catskills. Amtraking along the banks of solid water to and from the City. (Have you ever listened to the river ice break while waiting for the train in Rhinecliff?) Binge-watching television series on Netflix. Bar-hopping at the multiple venues around the region that offer live music and great food. Catching world-class theater in Poughkeepsie, Rhinebeck, Kingston, Rosendale, Woodstock, New Paltz … You get the picture. And speaking of pictures, don’t forget gallery-hopping to take in amazing works of art from Hudson to Beacon and beyond in both directions.

Or you could call all your friends and neighbors to join you in an impromptu potluck/kindling-chopping/bird-identifying/Christmas tree-burning/bring-your-own-whatever-you-want-to-imbibe-in, game-playing affair, and slough off the winter blahs with verve and fervor. Verve and fervor, people. Just makes you warm to say those words. I mean, look on the bright side… we could all be shivering in the Adirondacks.