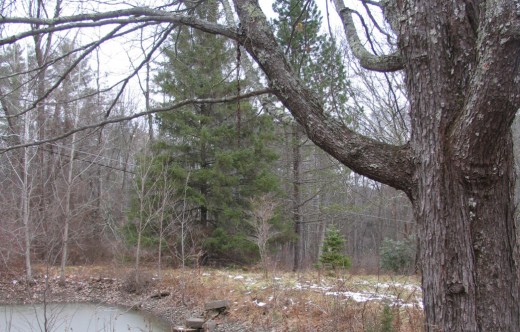 A heavy chain loops around the branch of a maple tree by our pond. I knew as soon as I saw it that it was put there by some long-ago deer hunter. And then I forgot about it—until this month when my husband went hunting for the first time in his life. His keen interest in target shooting, also a relatively recent development, morphed into the desire to put meat on the table, even though he doesn’t eat much flesh at all. I’m the carnivore here.

I didn’t request that he tromp off into the woods to provide for me, but I appreciate his interest in doing so. So when he announced he was going hunting with an experienced friend, I thought, “Okay.” He did tromp off into the woods, thoroughly enjoying the fresh air and silence and absence of human concerns, my need for meat aside. I mean, I can just go to the local market to satisfy this longing, right? My next thought was, “What if he actually shoots a deer? Then, what?”

He did tromp off into the woods, thoroughly enjoying the fresh air and silence and absence of human concerns, my need for meat aside.

He hasn’t so far, but late Saturday afternoon his buddy did. Bob called me after dark, reporting their success along with the fact that they were bringing the dead animal here. I donned my boots and mittens, pulled a headlamp over my forehead, and walked out into the darkness across the crisp snow to the spot I’d seen so many winters ago—the chain on the tree. I took a flashlight with me to lead them into the woods by the road where their truck was parked.

It was a doe, just big enough to qualify for the permit my husband’s friend carried. While it was still lying on a bed of snow in the back of the truck, I petted its fur. I thanked it for whatever karma had brought it into my life and promised to honor its death with all due respect. It had already been gutted in the forest, the innards left for scavenger creatures to devour. At home, my  husband cut a piece of wood and screwed metal pegs into it, onto which they skewered its hind ankles and hoisted it up. I watched as the two men skinned and butchered it, hanging from the chain in the tree.

The process didn’t take long. It was cold, and they acted quickly and reverently. The experienced friend coached us on how to pull down the hide, how to remove the meat. How to avoid contaminating the edible flesh with gunshot debris. I asked what he’d do with the carcass after it was butchered. “I’ll leave it in the woods for an animal to finish off.” In nature, nothing is wasted.