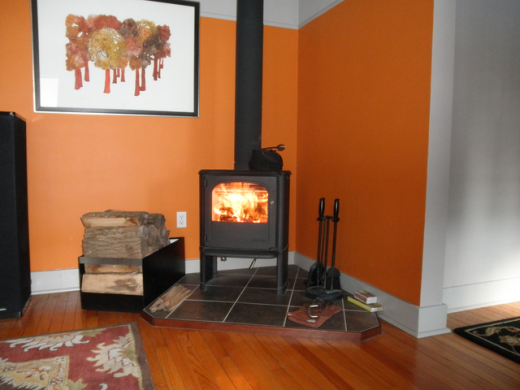 Each morning from October through March, he empties the ashtray, gets out the vacuum cleaner, and tidies up all around the woodstove. Then he cleans the glass door with a paper towel doused in ammonia. He goes to the basement, where his small chopping block stands near a pile of logs he’s already split and dried outside, and he splinters enough kindling off one of them to start a fire. He uses crumpled up newspaper on the bottom layer, then a nice mound of kindling, artfully crisscrossed into a pyre. He strikes a match and touches the paper. A puff of smoke might escape from the stove before the door is shut tight—he’s careful to let the fire breathe first to get it going. When the pile of kindling is ablaze, he adds a small log or two and lets them burn down into a bed of glowing coals. The cast iron stove pings and knocks as it heats up. The kettle, sitting on its surface, begins to steam. He fills this once a day to put a little moisture into the air. The room temperature rises. The aroma of burning wood wafts through the house on currents of cooler air. 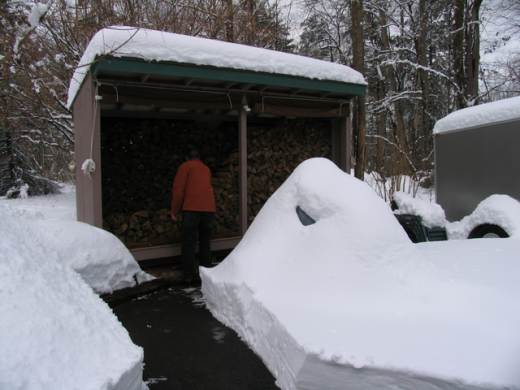 If the wood box needs to be filled, he trudges out the basement door to the shed he built, a structure with two end walls, a roof, and a solid floor a couple of feet off the ground. It holds three cords of perfectly measured and split logs, enough to get us through the winter. Behind the shed is his woodlot—the area where he drags rounds of tree trunks. Fallen trees from around the neighborhood, mostly ones knocked down by a hurricane a couple of years ago. It still looks like a war zone in the forest. He claims these trees, chainsaws them into manageable- sized logs, lets them season out back before splitting and drying them in stacks for another year. He transfers them to the woodshed by the end of September, then into the basement, one pile at a time, and finally up the stairs in armfuls to the black metal box he had custom-built to fit the angular space next to the tiled floor under the woodstove. He lights a match. He monitors the burn rate of each log throughout the day, tossing on one or two as needed. He keeps the home fires burning.