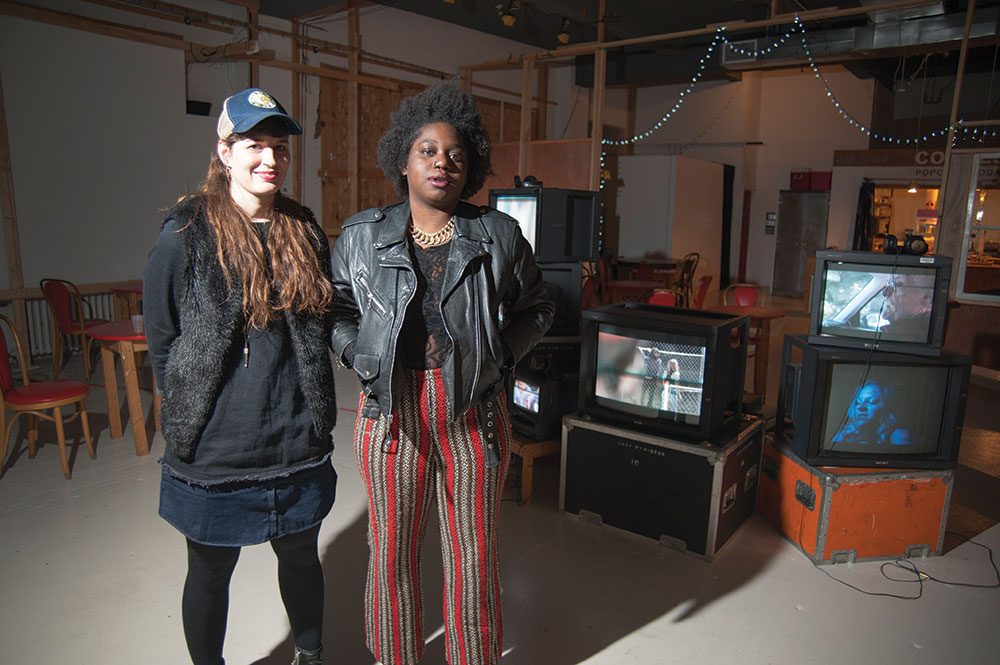 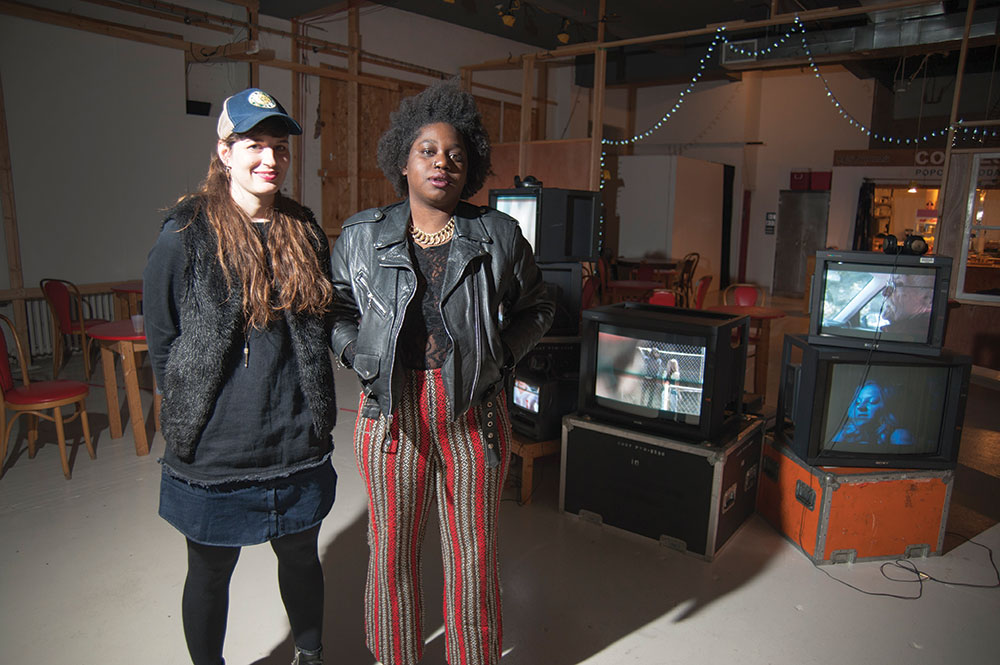 Last December, one of Hudson’s most exciting events was “Qu’est Qui Ce Passe,” a one-night-only video art show curated by Shanekia McIntosh and Bianca Hildenbrand at Time & Space Limited. It ran for six hours, spilling over into TSL’s screening room and café, and attracting over 80 people.

“It was fun having people come up with concepts and ideas that are out of their comfort zone,” says McIntosh, an artist and writer who publishes the zine ZeroCool. Hildenbrand, a visual artist who’d run a gallery in her native Switzerland, moved to Hudson from New York last summer, quickly befriending and teaming up with McIntosh.

For the video show, TSL offered the space for free, and Second Ward, a nonprofit arts foundation located in a former schoolhouse, loaned the equipment. The space itself helped dictate the pieces, notes Hildebrand: “We both like to work site specific, which determines how we set up everything.” Adds McIntosh: “We don’t like compromising. We could have done something really small, but then we thought, why limit ourselves to one room. We can think big about it.”

McIntosh considers her writing, collages, and curatorial events “an evolving body of work, utilizing different mediums to invoke community space and, most importantly, accessible art spaces.” This ethos reflects her experience growing up immersed in New York City as the daughter of Jamaican immigrants with a modest income. “What I lacked in financial opportunity I gained tenfold with that cultural education,” she says.

Hildenbrand, who attended art school in Zurich, had a similar experience in Basel, which has 40 museums and is known as Switzerland’s cultural capital. “These nonprofit institutions contrasted with the general art market and influenced my way of thinking and presenting art as a curator as well as an artist,” she explains. After graduating from Pratt Institute, Hildenbrand worked as an artist’s assistant “and learned a lot about the relationship between artists and the business of selling art.”

McIntosh attended school in the Berkshires, moved back to New York, did internships at Brassland Records, Nylon magazine, and Rolling Stone, and returned to the Berkshires, becoming a programmer and volunteer at the community radio station. When she settled in Hudson, she became a programmer at a weekly two-hour show called Pure Moods at WGXC, the community radio station for Columbia and Greene counties, and starting organizing screenings and concerts to benefit the station. “It was exciting to have the opportunity to visualize an idea and then be granted the autonomy and resources to make it happen, especially as a 21-year-old,” she says.

While surviving in Hudson as an artist isn’t nearly as difficult as in Brooklyn, “it’s not that easy” either, admits McIntosh. Housing prices have been increasing “at an appalling rate,” she notes. “We don’t have a grocery store and everything is fine dining, so woop!” But even though Hudson suffers from “very limited job opportunities and gigs,” she adds, “It’s hard everywhere right now. The economy sucks for working-class people, not to mention artists.”

But Hudson’s relative affordability does offer the luxury of time. Plus, McIntosh says, “I feel connected to a great community. In the city, my community was limited to people in the same age group or field. Hudson is all over the place; one of my close friends is 72.” Adds Hildenbrand: “Hudson reminds me of Basel. It’s a bit smaller. It’s easier to get into a scene and meet people. Also there’s a passion for doing things even it it’s not funded, and generosity from people to help you do things. That’s really new for me.”

The duo is planning future video series. In the meantime, “I got this crazy performance art round-robin thing I’m planning for summer at one of my favorite spaces in Hudson, Second Ward,” says McIntosh. “The possibilities are endless with that space, and it’s run by some great people. I always plan on having things—be they events, readings, art shows, or whatever—happen with space in between so I have time to plan properly. But it always ends up being back-to-back, and so it’s nuts and I never have any money. I need to figure out how not to do that.