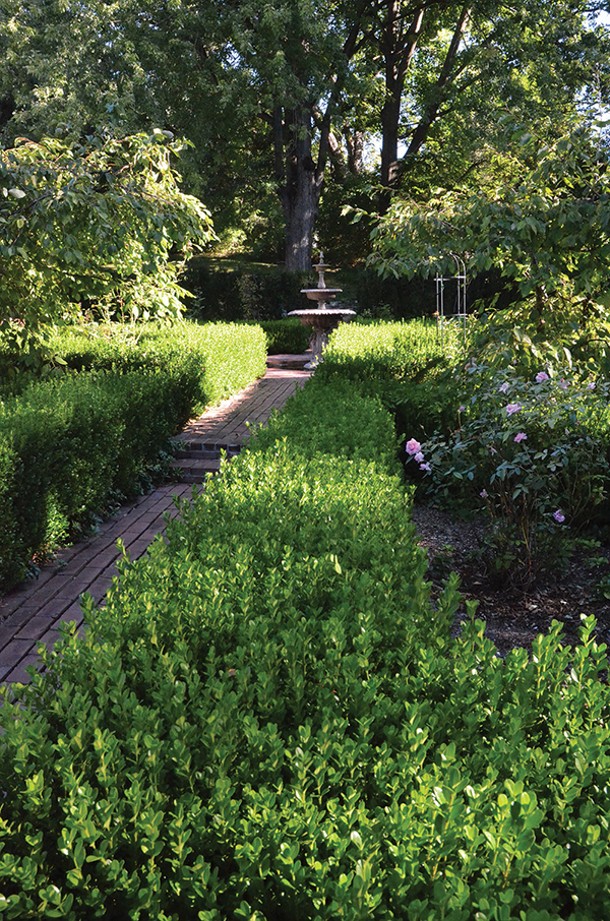 “The first myth is that all boxwoods smell like cat urine,” says Kevin Lee Jacobs, the Kinderhook-based food and garden blogger who writes the popular Agardenforthehouse.com and is the author of the cookbook Kevin’s Kitchen. “The cultivars on the market now have had that scent bred out of them.” Jacobs actually doesn’t mind the scent of those old-time boxwoods, and for many people—Europeans especially—it’s pleasantly evocative of the gardens they played in as kids.

The second myth is that boxwood is not sufficiently cold hardy in the northern states. “When they think of boxwood, most people picture the temperate climes and famous gardens of England, France, and Italy,” Jacobs says. Here too, hybridizing and cultivar selection has changed the game. There are 148 species and cultivars of boxwood available commercially. The shrubs that make up the thick ribbons of green in Jacobs’s boxwood garden are the selection ‘Winter Gem,’ which has proved fully hardy on his property. Two other reliably hardy ones for our area are ‘Green Velvet’ and ‘Green Mountain.’ Before you buy a given cultivar, do some online research about just how hardy it is. Otherwise, you could end up with winter-browned stems that look awful the next season.

The third myth is that boxwoods are crazy expensive. “This is true, but you can get around that by propagating your own, which is super easy,” Jacobs says. “I started my big boxwood garden with a few dozen plants and propagated my way up to 320 of them in the boxwood/rose garden alone. Then I have them here and there all over my property; when I create more boxwood I find I am compelled to make new gardens, even though I have no business making new gardens to take care of.” 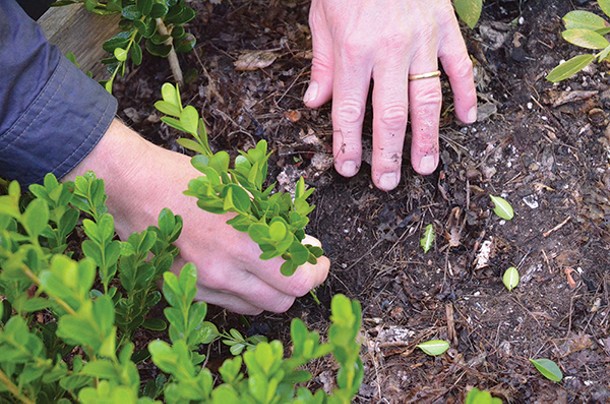 Genteel, and Tough as Hell

“The boxwood wants to live! It’s growing in poor soil on my property,” Jacobs says. When he and his husband bought their historic Kinderhook property in 2004, Jacobs decided to put a boxwood-lined rose garden where the asphalt parking lot used to be. He had contractors break up the asphalt, and then what kind of soil amending did he do? “Honestly, I didn’t,” he says. “I mean, I’ve been adding shredded leaves every year since I put the boxwood in, but the original plants had to tough it out—and they did beautifully.” This illustrates how durable the members of the Buxus genus can be. They are also deer-proof, and as evergreens they provide visual interest and structure year-round.

That said, as with all plants, boxwood has some preferences based on the locations in which it evolved. It loves sun but can tolerate part shade. Boxwood prefers soil on the alkaline side—a pH between 6.5 and 7.2. It likes moist, well-drained soil but once established, it can tolerate drought; in the dry summer of 2016, Jacobs didn’t once water his established boxwood, which suffered no ill effects.

The only boxwood he did water were his newly propagated ones—handfuls of cuttings he stuck in the ground in the spring. “It really is that easy,” he says. “You take clippings of new growth in the spring that are 5 or 6 inches long, strip the lower leaves, then stick them about 2 inches deep in a propagation bed, which is just a bed that has some good organic matter in it—no rooting hormone necessary.” Jacobs waters the cuttings the first season and within six to eight weeks they form baby root systems. “You know that roots have formed when new growth is evident,” he says. 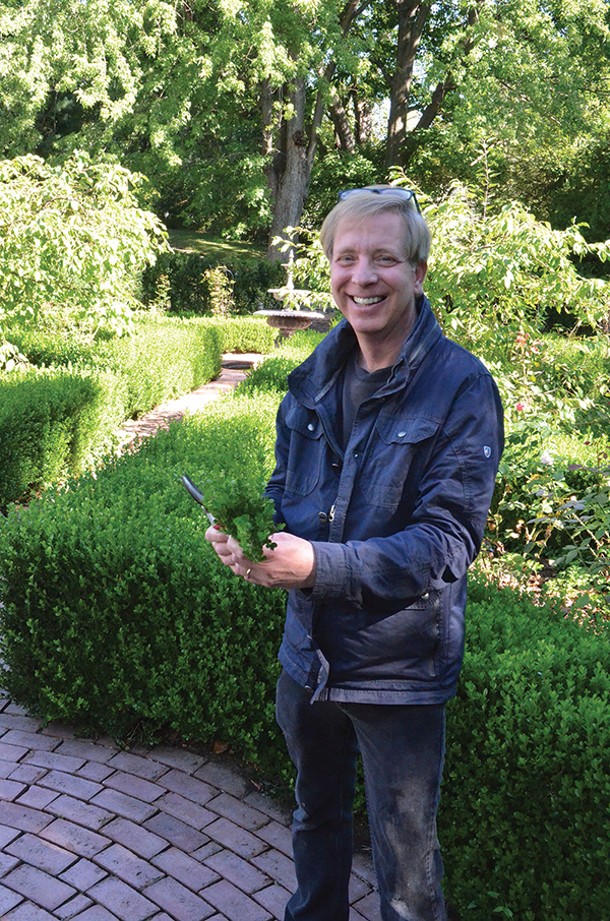 Within two years, the plants have sufficient root systems to be transplanted to wherever they are needed. In the event he loses an existing boxwood in the larger garden, he has replacements that eventually catch up to their more mature neighbors. Those neighbors are sheared once or twice a year—for Jacobs in Kinderhook, that’s once in late April or early May and again by late July or early August, after the plants have had their big flush of growth.

Jacobs finds his boxwood need no commercial fertilizer. “I just add shredded leaves to the beds every year in the fall,” he says. “I have an inexpensive leaf mulcher that sits right in the beds and shreds the leaves in the spot where you need them. If you think about it, nobody fertilizes or waters the forest—that’s what the leaves are for.”

Jacobs does periodic thinning of boxwood hedges to prevent the lack of sunlight penetration into the interior that can cause the interior branches to lose leaves, resulting in new growth only at the tips. He says, “You want to go in and remove some of the inside growth, just enough here and there to allow sun and air to come in, but not so much that you leave big holes. If you get back to totally leafless stems or hard-prune a boxwood to the ground, it’s very hard to get them to grow back. It’d be easier to start over by propagating new ones.”

When he needs to transplant boxwood shrubs, Jacobs often breaks the rules about moving only young plants, in the fall. “I’ve moved young ones, I’ve moved old ones—and they all took,” he says. Usually it’s recommended that boxwood be transplanted in the fall, when the air is cool but the ground is still warm. However, Jacobs has moved them in spring, summer, and fall. (If you transplant them at high summer, be extra vigilant about watering.)

Monitor for insects in the spring until mid-summer. If you observe “stippling” (little tiny white dots) or yellowing leaves, or leaves at the tips of stems that are curled back on themselves, you might have a pest issue. As with all plants, the healthier you can keep your plants—via good soil preparation and regular mulching, weeding, and watering—the less likely they are to be attacked by invaders.

The name “boxwood” comes from the fact that in some species, if you cut a cross-section of young stems and look at them head-on, you see that the stems are distinctly square/boxy.

The plural of boxwood is boxwood. You can also speak of the “box” or the “boxes” as is common usage in England. Or you can call them whatever you want—that is the fun thing about common names versus the non-negotiable scientific names.

Boxwood first came to North America from Europe in the mid-1600s. As such it’s our nation’s oldest garden ornamental. Famous boxwood gardens in the US include those of Colonial Williamsburg in Virginia and the collection at the National Arboretum in Washington, DC. Closer to home, there is a handsome boxwood ring around the 9/11 Memorial at Orange County Arboretum in Montgomery.

Most of the grand public and private boxwood gardens in Europe came from cuttings that the daughters of well-to-do families brought to their new homes when they moved in with their new husbands. In this way, they’d bring something of home with them—kind of like the sourdough starter of the plant world.

This article was written by Michelle Sutton. It was first published in the June 2017 issue of Chronogram, and is reposted here with permission.