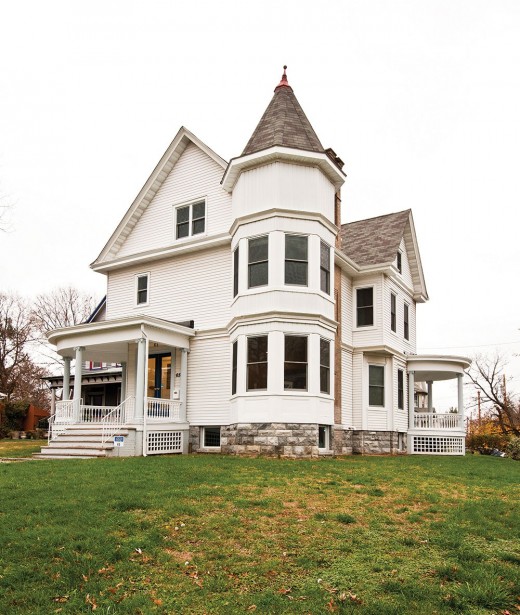 [Editor’s Note: This article originally appeared on Chronogram.com on December 1, 2015 and has been reprinted here with the author’s permission.]

Jennifer and Vinicius Rosa sleep on a single mattress without a bed frame. They own a bed, but it’s in the guest bedroom for when his parents visit. They also own a sofa, a flea-market dining room table and six chairs. There’s a build-it-yourself desk in an office and a crib in the nursery for baby Hannah. For now, that’s about all the furniture inside their home.

But furniture alone does not make a home. And for these immigrants who fell in love at the Culinary Institute of America and wanted to settle in the Hudson Valley, home was whatever they could find: possibly a trailer, a fixer-upper, or a cramped apartment. But thanks to the nonprofit community development organization Hudson River Housing, the Rosas found the perfect place: an off-white, 2,678-square-foot, four-bedroom, two-and-a-half-bathroom, circa 1880 Victorian on Clinton Street in Poughkeepsie. Now they will be a stable, working part of the city’s future.

Jennifer and Vinicius took dissimilar paths to Poughkeepsie. She was born in Caguas, Puerto Rico, then moved to Hartford, Connecticut, at age eight. When she turned 13, Jennifer was taken from her mother and put in foster care. She lived in a succession of five foster homes, and was given the opportunity to attend college through the Connecticut Department of Children and Families. Jennifer chose the CIA to follow her dream of becoming a baker.

Vinicius hails from Salvador, a city on the tip of a peninsula in eastern Brazil. Jennifer calls Salvador, which sits on the Atlantic Ocean, “paradise.” But Vinicius left paradise to pursue his dream of becoming a chef in America, and chose to further his education at the CIA, which he felt was the best cooking school in the world. There, the Brazilian faced the realization that Americans weren’t used to seeing a man jog around campus wearing nothing but a Speedo, a regular sight back home. “Every time I did it, a security car would just pass by me,” he says. “Just pass to see what was going on.” 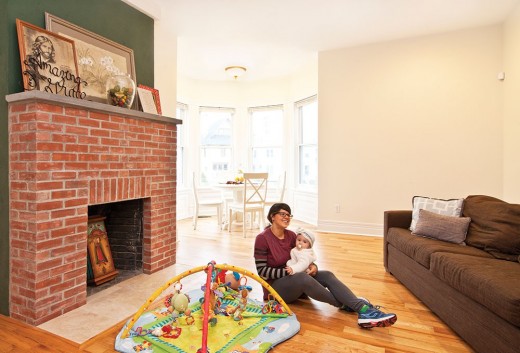 Vinicius and Jennifer met through a friend in October 2011, just weeks before she was to earn her associate degree. Vinicius, meanwhile, was considering returning to Brazil to open a restaurant, but his attraction to Jennifer quickly formed. The feeling was mutual. “We found out we’re really intense people,” added Jennifer. “All my boyfriends dumped me for being intense, and all his girlfriends dumped him for being intense. So we had a connection from the beginning. With everything we were just like twins. We were soulmates.”

Their only major difference was in their religious beliefs. Jennifer is a devout Bible-based Christian, and Vinicius, at the time, was “a violent atheist,” regularly challenging Christians and other believers. Both opposed the traditional Catholic Church of their parents, claiming it stood primarily for money and supported a narrow mission. After Jennifer received her associate degree, Vinicius planned a romantic New York City weekend, which included a visit to the Hillsong Church, a famous Bible-based church known for its youth-targeted services accented with modern Christian rock. He enjoyed its messages of inclusion and “God is love.” Slowly, he started becoming a Bible-based Christian.

After graduation, Vinicius moved into an apartment in Hyde Park and found a job at Lola’s Café and Catering in Poughkeepsie. Jennifer continued at the CIA to earn her bachelor’s degree. The couple married in 2013 and moved into the apartment together, but the rent was too high. So, starting in June 2014, they looked at trailer homes, nearly purchasing one for $13,000, but the model sold out before they could close. They looked into other trailers, then small homes, but the only properties they could afford needed extensive renovation, which was beyond their means. Adding to this stress, Jennifer was pregnant. A lack of money, with more expenses to come, jeopardized their dream to start a family in the Hudson Valley. But they prayed. Jennifer, who admits a fear of mice and dislikes basements, even prayed for trivial things. “I was saying, ‘Lord, I want a house that has the laundry upstairs.'”

One house finally emerged, but that led to a bidding war, and they couldn’t compete. Then, one day, Vinicius’s phone rang. It was a number he didn’t recognize. “A person tells me, ‘I found your house,'” says Vinicius. “I ask, ‘Who is this?'”

It was his friend Alex, who wasn’t in real estate.

“‘What are you talking about? How much is it?'”

That house was the circa-1880 Victorian in Poughkeepsie, and Alex, who worked in construction, helped renovate the house for Hudson River Housing. According to Jennifer, Alex told her: “I think God was telling me that this was going to be your house.” 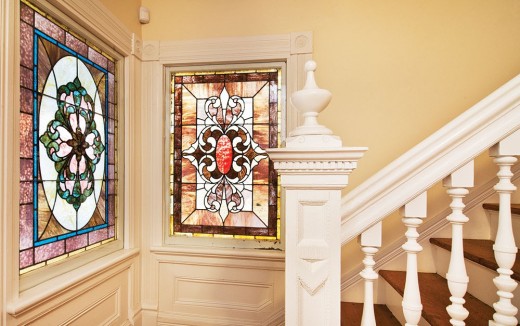 Previously, the house was unlivable. “When we took that property over, it was very different from what you see today,” says Mary Linge, director of real estate development for Hudson River Housing. Working with numerous vendors, the nonprofit spent $480,000 to renovate the house. They did extensive work on the roof, repaired water damage to the attached apartment, extended and widened the driveway, and furnished the home with energy-efficient appliances, including hot-water heaters, a refrigerator, and an oven. They also kept and restored the original 19th-century features of the house, including patterned tin ceilings, hardwood floors, three fireplaces, and three show-stopping stained-glass windows in the entryway and stairwell.

Keeping true to the integrity of the structure is a goal for every property Hudson River Housing buys. The organization seeks properties with historic value, renovating them extensively so they can retain as much of their original appearance as possible. “Knowing that the people here long before us have built good houses and have good stories, we want to invest in what’s already there and bring it back to its original splendor,” Linge says.

Hudson River Housing also aims to work with people who want to settle in and add to the history of the communities they renovate. They saw that in the Rosas, who together made less than the $52,000 eligibility cap established by Hudson River Housing.

The Rosas, however, encountered problems when attempting to secure a mortgage. “The first banker actually thought it was a scam,” says Jennifer. “He said, ‘This is way too good to be true. I advise you to leave.” A second banker wouldn’t help the Rosas because of their lack of established credit. So they turned to Hudson River Housing, whose affiliated counselors advised them to produce any and every bill payment receipt to show they could meet payment deadlines. They did go to another banker, who gave them their loan.

An Agreement to Stay

The Rosas, with baby Hannah, who was born in March, moved into the Victorian in August. As per their agreement with Hudson River Housing, the Rosas are required to stay in the house for 10 years, plus install a tenant in the attached apartment. Jennifer took a one-hour landlord class, and both she and Vinicius underwent one-hour first-time-home-buyer training, all through Hudson River Housing. So now they understand how to budget expenses, such as the woodstove Vinicius hopes to install for winter, to take advantage of the house’s three chimneys and to cut down on heating costs.

“We are tight in the sense that we cannot waste money,” says Jennifer, who recently launched a small baking business, 58:10 Pastries. The name is a reference to a passage in Isaiah that exhorts believers to feed the hungry and assist the oppressed. Jennifer plans on donating 10 percent of profits to organizations that help fight human trafficking. The Rosas also hope the baking sideline will add to their income. “We may not have furniture for a while.”

What they have, though, is a home.

School board members, city officials, restaurant workers, and social-service workers are some of the thousands of people Hudson River Housing has helped through their work developing Hudson Valley communities.

Founded in 1982, the Poughkeepsie-based nonprofit originally focused on providing services for homeless people in Dutchess County. But through the years, Hudson River Housing has expanded to work with prospective hom buyers and budget-constrained individuals, families, and seniors. It provides emergency and transitional housing, supported housing for people with mental illness, foreclosure prevention counseling, and street-based outreach programs for youth. The work is designed to strengthen diverse neighborhoods through education and shelter.

“If neighborhoods are strong, people are going to be happier and healthier,” says Elizabeth Druback-Celaya, director of organizational and community development for Hudson River Housing.

In its 33-year history, Hudson River Housing has developed more than 960 residential and commercial units, actively managing around 800 of them. Another 200 units are in their development pipeline. And 45 units have been sold by Hudson River Housing to first-time home buyers; one of them is the 1880 Victorian in Poughkeepsie owned by Jennifer and Vinicius Rosa.

The Victorian fits Hudson River Housing’s mission to preserve existing properties, turning them over to home buyers after extensive renovation. They prefer not to bulldoze and rebuild from scratch.

“Whenever possible we want to find a way to repurpose and reuse these structures as much as we can,” added Druback-Celaya. “We have communities of generations of people who have created these places. We’re creating opportunities for people who have lived in these communities for a long time, or if they want to be in the community, they can do so.”

To be part of the community, prospective home buyers must fit Department of Housing and Urban Development income eligibility criteria at the onset—a maximum income of $45,500 for an individual, $52,000 for a couple. Further, they agree to take first-time-home-buyer courses through its partner, the NeighborWorks HomeOwnership Center of Dutchess County (some homebuyers may have to take landlord classes, if their property includes apartment housing). Homeowners also have to show they qualify for a 30-year fixed-rate mortgage with a participating lender, and agree to stay in their home for the length of a recapture program attached to a property grant. That could be 10 or 20 years.

“They’re designed [so the homeowners] stay in the community,” says Mary Linge, director of real estate development for Hudson River Housing. “They become stakeholders and raise their families there, work there, better themselves there. After 10 or 20 years, after the grants are forgiven, they have this asset that is worth every dollar the market will bear.”

In essence, Hudson River Housing is investing in people to become stewards of a community. “We have been so lucky that the people who have come into these homes are exactly the people we dreamed them to be,” Linge added. “They’re active in their communities. They’re raising their families there. They see themselves there forever, which is exciting.”