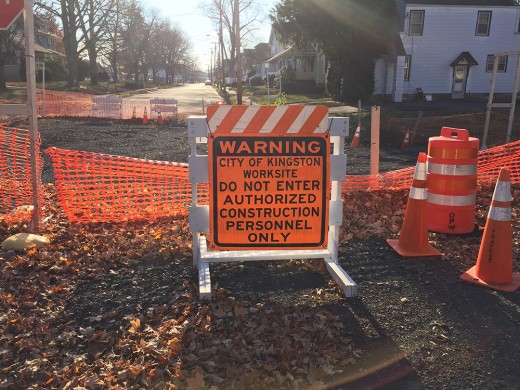 I live by the sinkhole in Kingston, New York. As far as sinkholes go, this one is pretty great.

Anyway, my wife and I bought our hundred-year-old Victorian in the spring of 2012. We were living between Carroll Gardens and Uptown Kingston that first year, taking our baby, Ruby, back and forth, back and forth. But then my wife got pregnant with our second, and we decided to just go for it full time upstate.

It’s been a thing, living upstate. You know? A real thing. A good thing, mostly. We loved the city, but we love it here, too. You should try it. Maybe you are trying it. But there is one problem.

I’ve spent the past 13 or so years writing and producing weird live shows. I co-wrote and co-produced a show called The Electric Arc Radio Show in Minneapolis from about 2003 until 2007 or 2008.

And when I moved to New York City, I produced a show called Radio Happy Hour. It featured a radio-style murder mystery and special guest stars. We had Norah Jones on the show, and Jesse Eisenberg, and tons more.

Both shows were pretty weird and mostly kinda popular, I guess — I was featured in Nylon Guys Magazine, and we were written about in The New York Times and we got a little blurb in The New Yorker — and this would be a brag if any of my shows had made any money. Sometimes I made a living doing shows like these, but mostly it was a lot of really hard work for something like minimum wage, but probably less. But it’s what I do. It’s a weird, indescribable, frustrating career, and I love it because it always brought people together. People look for reasons to run into each other, and for places that allow such run-ins. These shows have always been very open to run-ins. I’ve produced probably 200 hours of programming since I started.

Now we have baby Ruby and baby Hazel, and I’ve produced almost zero hours of programming since I moved next to the sinkhole. That’s the problem. Maybe this is something you think about as you read articles on Upstater.com and dream about your little cottage in the Catskills. What if I went all in? Could I do what I do upstate?

For me, the answer is I don’t know.

But I’m going to give it a shot. I’m producing and hosting a new show called The Locals at BSP (across the street from my beloved Outdated, where I’ve spent probably 1,000 hours in the past two years, and likely many more thousands of dollars on coffee and quinoa porridge for Ruby, because she’s like a quinoa porridge incinerator). We’re working with Chronogram and it’s all very exciting. It’s the first show I’ve done since we shut down Radio Happy Hour in 2011 (conveniently shuttered months before Ruby was born and world quinoa levels suffered devastating declines. Kids ruin everything).

Anyway. It’s a show about a fictional town called Dinges (pronounced Dingus, although out-of-towners call it Din-jess because they’re faux).

The Locals. I’m obsessed with this notion of the Local. When I was a kid, the locals were the drunks, or the hayseeds, or the usual suspects and, in any case, you didn’t want to ever be one. You wanted to go away, maybe to New York City, and be something else. People where I grew up — the Midwest — wanted to live in the suburbs, which is no place for a Local, really. Locals love company, but there aren’t even sidewalks in the suburbs, only private backyard decks. The suburbs breed dislocation and separation and isolation, which are conditions we’ve built great monuments to just outside of our cities in the past several decades. We’ve aspired to this alienation. 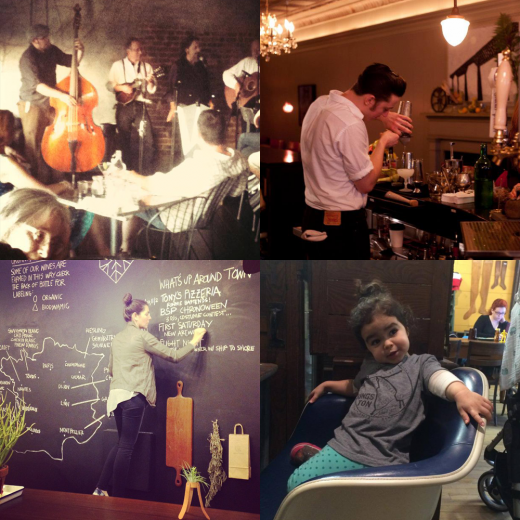 But now we find local to be aspirational. We want to belong to a place and know the people who live there. And this belonging will happen, so long as there are places where we are allowed to run into each other, where we are allowed to be locals. That’s the beauty of Outdated Café. And Boitson’s. And Stockade Tavern. And Kingston Wine Co. And countless other gems of the Hudson Valley, which I’ll be writing about every week.

That’s what I want my new show to do, anyway. Sweet Jesus knows it probably won’t make any money. And probably this is just a rather wordy plug for my show. But, hey! You should come! And if you come, you’ll be a part of it. You’ll be a part of all of it. The whole thing. And afterward, we can have a beer and I’ll tell you about the sinkhole by my place and we can discuss the odds of you doing what you do up here, and I’ll encourage you to move (Why not? You can do it!) and tell you about how kids ruin everything, and you’ll know I’m just kidding.