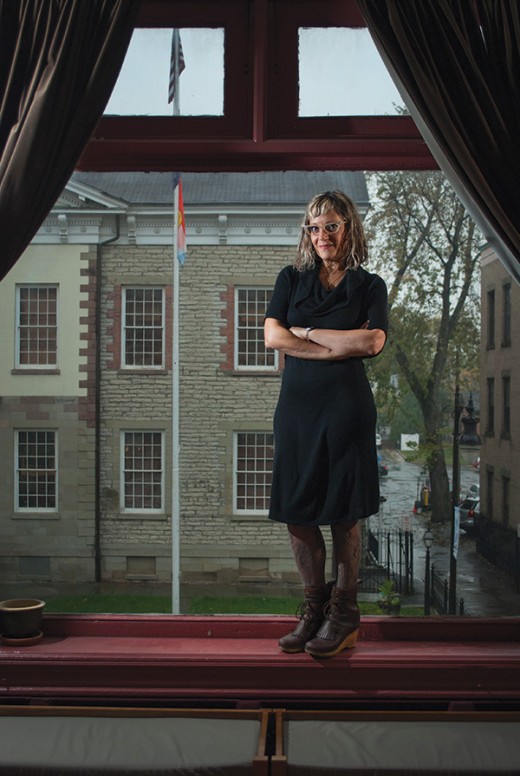 Editor’s note: We were excited about Sari Botton’s second anthology — a collection of essays on loving and leaving NYC — before we got news yesterday that it hit the New York Times Best Sellers List. Now, we couldn’t be more thrilled. Chronogram books editor Nina Shengold spoke to Botton this month, and we think you’ll love her as much as we do. If you’re lucky enough to be upstate in Kingston tonight, she’s making an appearance at outdated: an antique café‘s Word Café at 6 p.m. Read on for Shengold’s profile of Botton…

“I need a chocolate pistachio cookie,” Sari Botton says, gazing into the bakery case of Kingston’s outdated: an antique cafe. In the acknowledgments of her just-published anthology Never Can Say Goodbye: Writers on Their Unshakable Love for New York (Simon & Schuster, 2014), Botton thanks outdated for keeping her “in gluten-free treats and rocket fuel-grade coffee as I hung out and worked for hours on end.” (The adoration is mutual: The café displays a poster-size bookjacket and flyer for her October book launch.)

“I’ve always been a juggler,” Botton says. But today, she’s relaxed and aglow from a five-day retreat at the Omega Institute’s Women’s Leadership Center, which she calls “restorative and productive in equal measures.” She’s also thrilled that Never Can Say Goodbye is gaining the same must-read buzz as its predecessor, Goodbye to All That: Writers on Loving and Leaving New York (Seal Press, 2013). Named after Joan Didion’s iconic 1967 essay, the Indiefab and Village Voice award-winning anthology features Ann Hood, Dani Shapiro, Emma Straub, and 25 other women.

Never Can Say Goodbye adds men to the mix and includes such A-list names as Rosanne Cash, Alexander Chee, Whoopi Goldberg, Phillip Lopate, and Susan Orlean. It’s been a wild ride for Botton, who conceived of Goodbye to All That eight years ago. “Everyone said, ‘It’s a great idea, but you shouldn’t do it—you’re not well-connected enough,” she says. But she was convinced her idea would fly. “So I polled writers I knew: ‘If I were able to set this up, would you write a piece?'” When Seal Press snapped up a three-page proposal with an informal list of potential contributors, Botton recontacted everyone who’d made a verbal commitment.

Among them was her fellow Rumpus columnist Cheryl Strayed (aka “Dear Sugar”), who’d agreed to participate long before Wild went global. “I said, ‘Okay, if I get this deal, would you still do it, even though Oprah just restarted her book club for you?’ And Cheryl said yes.” Botton’s voice fills with emotion. “It was one of the most generous gifts I have ever received in my life.”

Goodbye to All That launched in October 2013, in a flurry of glowing reviews and multiauthor events. Within three months, Botton had a contract for a follow-up, ASAP. “In January I have shingles and the flu and I’m in bed, and I get a deal with an April first deadline,” she says. “I had to get the writers, negotiate contracts, edit their pieces, write my own piece, write the intro. My to-do list was a spreadsheet.”

Still, she was glad to continue the dialogue. Goodbye to All That had ardent fans, but some found the viewpoints too similar. Though Seal Press had wanted an all-female list, Botton ensured that Never Can Say Goodbye included writers of different genders, ages, ethnicities, and backgrounds. “New York is the most diverse city in the world,” she says. “I wanted to mix it up with a more diverse chorus of voices.”

She also wanted to correct anyone who mistook Goodbye to All That for a parting sneer in the rearview mirror. Let there be no mistake: Sari Botton is “crazy in love” with New York. And the fact that she’s lived in the Hudson Valley for nearly a decade does nothing to dim the torch.

Botton grew up in various Long Island suburbs, 45 minutes and a world away from Manhattan. “All the houses in my town looked alike,” she recalls. “All the kids had the same sneakers, the same lunchbox.”

She remembers her first trip to New York with her grandmother, before she turned six. They visited her “garmento” grandfather’s Seventh Avenue office, and went shopping at Gimbels. Right from the outset, the city felt magical. She wanted in.

As a teen, she’d sneak into the city, with friends or alone, trying to pass for a local. “I looked to the East Village as my very own dork rehabilitation program,” she writes in her essay “New York Cool.”

Botton went to SUNY Albany to study theater, but after she won a competitive internship at Newsday, “suddenly I was a journalist.” She also interned at I Love NY, where her mentor nicknamed her “City Mouse” because she was always trying to get to Manhattan.

After college she worked at Women’s Wear Daily, but chafed at the daily routine. “I have a freelance soul,” Botton says. “I don’t like office politics, I don’t like fluorescent lighting, I don’t always function at the same hours of the day.” So she multitasked as a ghostwriter, ad copywriter, and freelancer for the Village Voice, New YorkMagazine, Harper’s Bazaar, and others. In 2007, a New York Times “Modern Love” column vaulted her into the spotlight.

The subject? How she met her husband, Brian Macaluso, by refusing to play by The Rules. Ignoring the ubiquitous (and wincingly sexist) dating guide, Botton forged a lasting connection with someone she clearly adores. They left Manhattan together, buying a house in Rosendale and recently moving to uptown Kingston.

It’s hard to imagine two lives that cross-pollinate more, or in more different genres. Botton runs the Anvil Gallery at Macaluso’s IT business TechSmiths. Their ukulele duo Loveypie recently played at the Rosendale Street Festival. And Macaluso wrote a hilarious essay called “The Shvitz at the End of the World” for Never Can Say Goodbye, after honing his skills at the TMI Project, the acclaimed storytelling nonprofit led by Eva Tenuto, Julie Novak, and Botton.

After directing Eve Ensler’s “The Vagina Monologues” for three local fundraisers, Tenuto invited actresses to write and perform autobiographical monologues at the Rosendale Theatre. “Too Much Information” was an immediate smash, and attendees clamored to tell their own stories. Tenuto’s partner Novak proposed bringing Botton on board as a writing coach and editor. It was a perfect fit; Botton calls it “a mind-meld.”

“It’s grown exponentially in less than four years,” Botton says. TMI’s breakout success both enriches and complicates her freelance juggling act. “We get a lot of vicarious trauma working with people who have been so traumatized, sometimes 30 of them at a time. I’m really proud of the work we do. It’s very gratifying, but it’s also very, very taxing.”

She’s also frank about freelance economics in the digital age. “I’m having to work two or three times as hard to make half as much money,” she says bluntly. “I plant seeds for a lot of things and hope they come up, and sometimes they all come up at once.”

What would she do if she had no other commitments? Botton’s answer is unhesitating: “My own book.”

She’s currently writing “a memoir in essays and/or fiction stories,” which took on new urgency when she learned that writer and spoken word legend Maggie Estep had died of a heart attack, three days after reading at a Goodbye to All That event at Oblong Books & Music.

Botton’s voice wavers. “I didn’t know that was even on the menu,” she says. “She was 50. I’m turning 49 next week. Both my grandmothers died in their early fifties. And Maggie was this person I’d idolized for so many years. It just blew my mind. It’s still blowing my mind.” (She dedicated Never Can Say Goodbye to Estep.)

Botton takes a deep breath. “I’ve been putting off writing my own book—not 27 writers and me, not hiding as a ghost writer, but getting over my fear of putting myself out there and worrying about what other people will think. It’s time to get over this shit and do it. This is it, girl. Put up or shut up.”

She also wants to edit a new anthology about reproductive rights (Botton collaborated with Kim Wyatt on last year’s Get Out of My Crotch!) and a book based on her Rumpus column “Interviews with Writers Braver Than Me.” Will there be a third New York anthology?

Botton hesitates. “I don’t know if I’m done,” she admits. She’s quick to add that she “really loves” living upstate, and “the feeling of being part of a smaller, more tightly knit community.” But she still longs to attain New York cool—to be “permanently, irreversibly cemented to the place”—no matter where she gets her mail. “It’s similar to upstaters’ perception that even if you’ve lived here for 20 years, you’re not really a local. How do you accumulate enough cred to be considered a New Yorker, an upstater, a Rosendalian?”

The question may be rhetorical, but Botton recently found a surprising deep root. She knew her maternal grandmother had been born “on a farm upstate,” but had no specifics. “I was going through a box of old photos, and some had ‘Kingston’ on the back, watermarks from a photography studio on Wall Street. I have family buried in the Kingston Jewish Cemetery.” Sari Botton grins. “So I’m a fucking local. I got cred.”