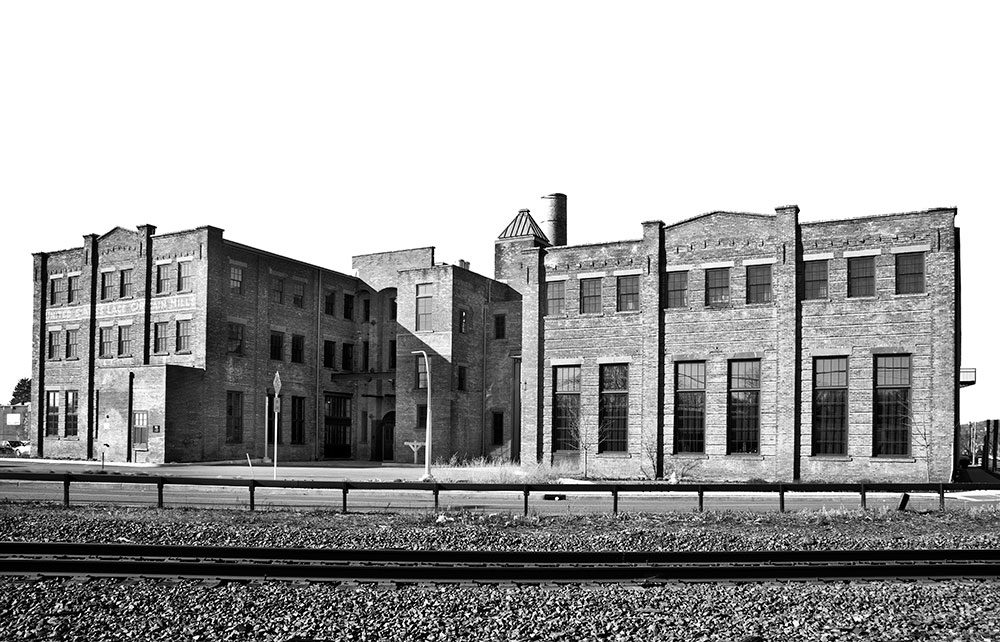 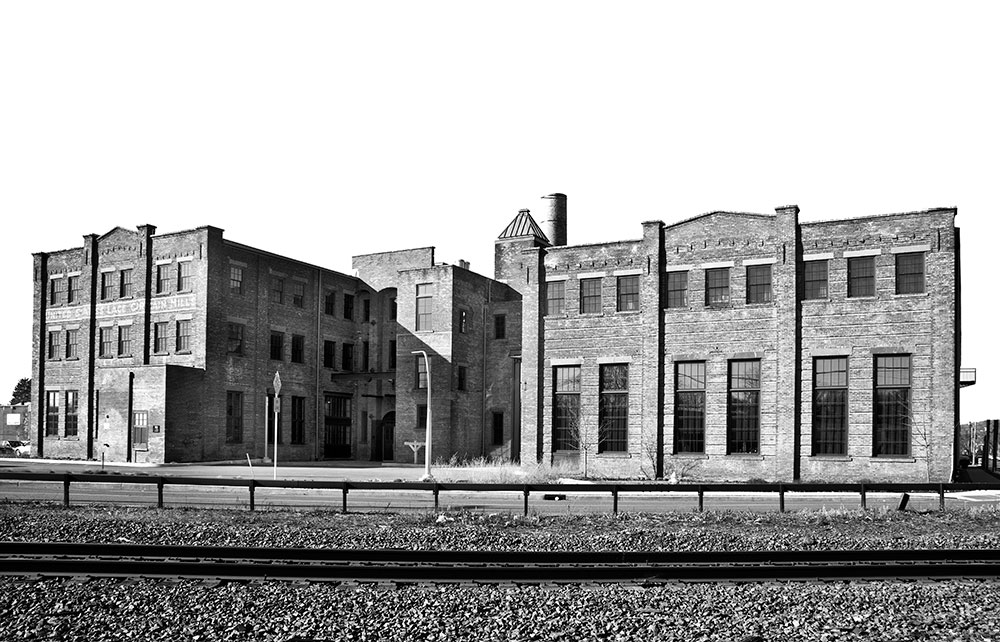 From the Lost Generation to Andy Warhol’s Factory, from the painters of La Belle Epoque to the Beats, history shows that when a few artists have the space and opportunity to inspire and collaborate they will have an outsize effect on the community around them. Whatever the types of makers involved, small creative collectives can be powerful catalysts for social evolution and technological innovation. RUPCO’s Lace Mill project in Kingston was designed to create just this kind of synergy.

Once the US Lace Curtain Mill, the 1903 factory had been employed as a warehouse over the past decade and fallen into general disrepair. In 2013, RUPCO bought the 70,000-square-foot brick building and began creatively repurposing the space into 55 rental units of artist housing and multiple shared community spaces, all of varying size, shape, and detail. After a year and a half of occupancy, the Lace Mill is growing into a dynamic center of creative combustion. It’s a place where painting, music, the literary arts, and technology all overlap and commingle—spurring the residents within and the surrounding neighborhood to new creative heights.

“We called ourselves the three-legged stool.” Scott Dutton, the project’s lead architect, says of the partnership he formed with RUPCO director Chuck Snyder and the project’s construction manager, Keith P. Libolt of Affordable Housing Concepts. “We were a team—a triangle—with a fixed amount of money and time. Every week we met, went over the budget, and adjusted with the changes. Over the 15 months of construction it was a constant collaboration. But the project was richer because of it.”

As the buildings were being constructed, RUPCO began accepting applications from potential residents (they received five times the amount of applications as the spaces available). Like other RUPCO projects, income was part of the qualifying criteria, but they also assembled a panel of local artists to interview applicants. “We asked applicants to demonstrate a commitment to their work,” says RUPCO VP of Community Development Guy Kempe. Next, the panel asked applicants: “What kind of contribution do you want to make to the Lace Mill community?” RUPCO didn’t rule out any medium, welcoming everyone from craftspeople to poets to media artists to sculptors and jewelers to apply.

“We tried to be expansive,” Kempe explains. “It was all part of our strategy to create a vital artists’ community.” The final residents were selected by lottery and assigned apartments randomly. Leases are reviewed every year, but there is no end date or proscription to the arts represented.

The RUPCO team secured grants and received tax credits to preserve the historical nature of the property. The also had the building listed with local and state historical registers. The goal was not only to protect the building’s original architecture but also to honor its rich history by incorporating many of the original factory details into the current design. Those juxtaposed needs—between history and the day to day—added challenges but also resonance to the project. “On one hand,” says Kempe, “we understood that what we were assembling was going to be a living, breathing, changing, dynamic thing; at the same time we also have an obligation to preserve and protect this building.”

After a year and a half, Kempe is seeing the positive results of their careful planning and hard work. “The artists that live here arrived with the expectation of making an investment to the community,” he notes. Dutton sees a historical through-line. “I love how the building connects the present to the past: The original workers were people who made art—they made intricate lace fabrics. They were craftspeople. Now, the place is full of makers again.” 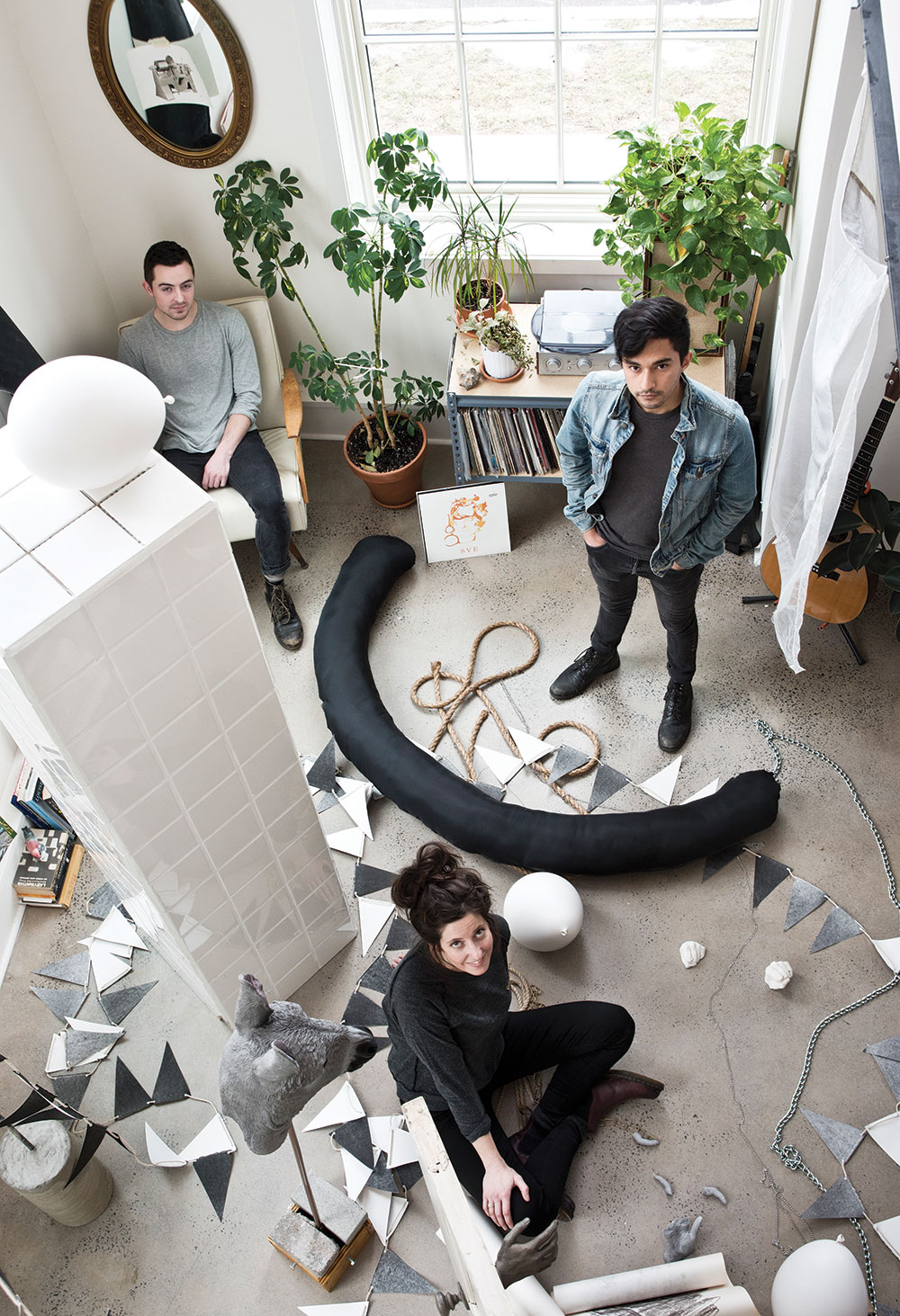 Inside the complex, each apartment is a collaboration between the building’s history and potential. This distinctive interior design has been a boon to Chelsea Culpepper, Aaron Lockhart, and Daniel Cardenas, who all have apartments in the building. “Basically we make sculptures together, as well as drawings and paintings,” says Culpepper, “and videos—our work is a melting pot.” All three have jobs in the surrounding arts district, and convene most evenings to collaborate on projects. Culpepper’s first-floor, corner apartment, where the lofted living room abounds with light and the concrete floors allow them to “make a mess,” is currently their favorite work space.

Culpepper and Lockhart originally met at the University of Alabama, where both received BFAs. After a brief stint in the city, they found Kingston. That’s where they met Cardenas, who had just received a BFA from SUNY Purchase. The three hit it off right away. “We were all on the same page as far as art goes,” says Lockhart. Before the Lace Mill, the three shared a house in the Kingston Rondout where they often found themselves preparing elaborate birthday celebrations for one another as well as bon voyage and welcome-back parties. Then, explains Cardenas,”we started collaborating and gave ourselves permission to play.”

When they heard the Lace Mill was opening its doors, all three applied, and were delighted to be accepted and win spaces. Now, they happily continue their collaboration within its walls. Most recently they’ve developed a series of shows exploring the idea of the artist community and playing with and within the Lace Mill’s shared spaces. “All the exhibition spaces are so different,” says Lockhart. “We can play in a way that isn’t possible with a white-wall gallery space.”

The first show was held in an outdoor exhibition space last summer. The second show—a comic riff on workout videos—was held in the boiler room gallery space. The third show in their series, revisiting the birthday party theme, will be held in the second-floor mezzanine gallery space in February. The Lace Mill community has further inspired both their personal and collaborative work. “We get a whole new perspective—kids, adults, and other disciplines,” says Culpepper. Lockhart agrees. “Watching other residents make shows, seeing them succeed, is inspiring and motivating,” he says. 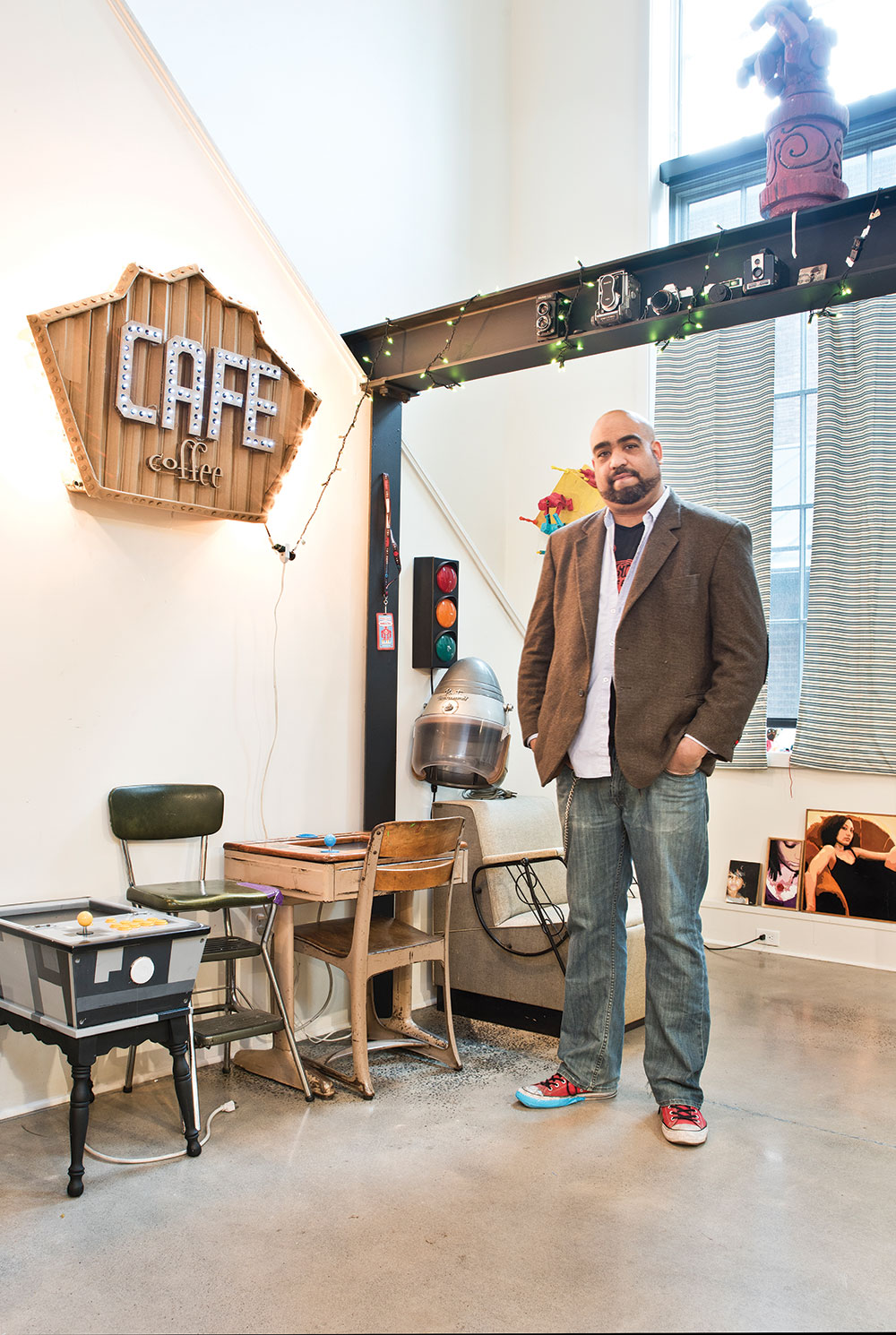 “In the building I’m known as the mad scientist of art,” Felix Olivieri says as he shows me around his lofted “maker space.” Vintage video game consoles, recycled computer parts, old televisions, and antique radios line the walls of his living room, waiting to be carefully dissected and then repurposed into one of his creations. “There’s a whole lost art to recycling old toys and electronics. You can make costumes, lamps, and even furniture,” he says. A staircase climbs out alongside the two-story windows leading to two bedrooms and a bath. “It’s a New York loft-style apartment without the New York price tag.”

The New York City native shares a two-bedroom apartment with his preschool-age son. It’s on a first-floor wing of the building—an area with other families and an easy sharing of space and playthings. He appreciates the camaraderie of the other families as well as the artists in the building. “It’s like ‘Seinfeld,’” he explains. “People knock all the time to borrow supplies, or just let themselves in. We have a Kramer. I’m Jerry. We have a George—but George is a woman.” 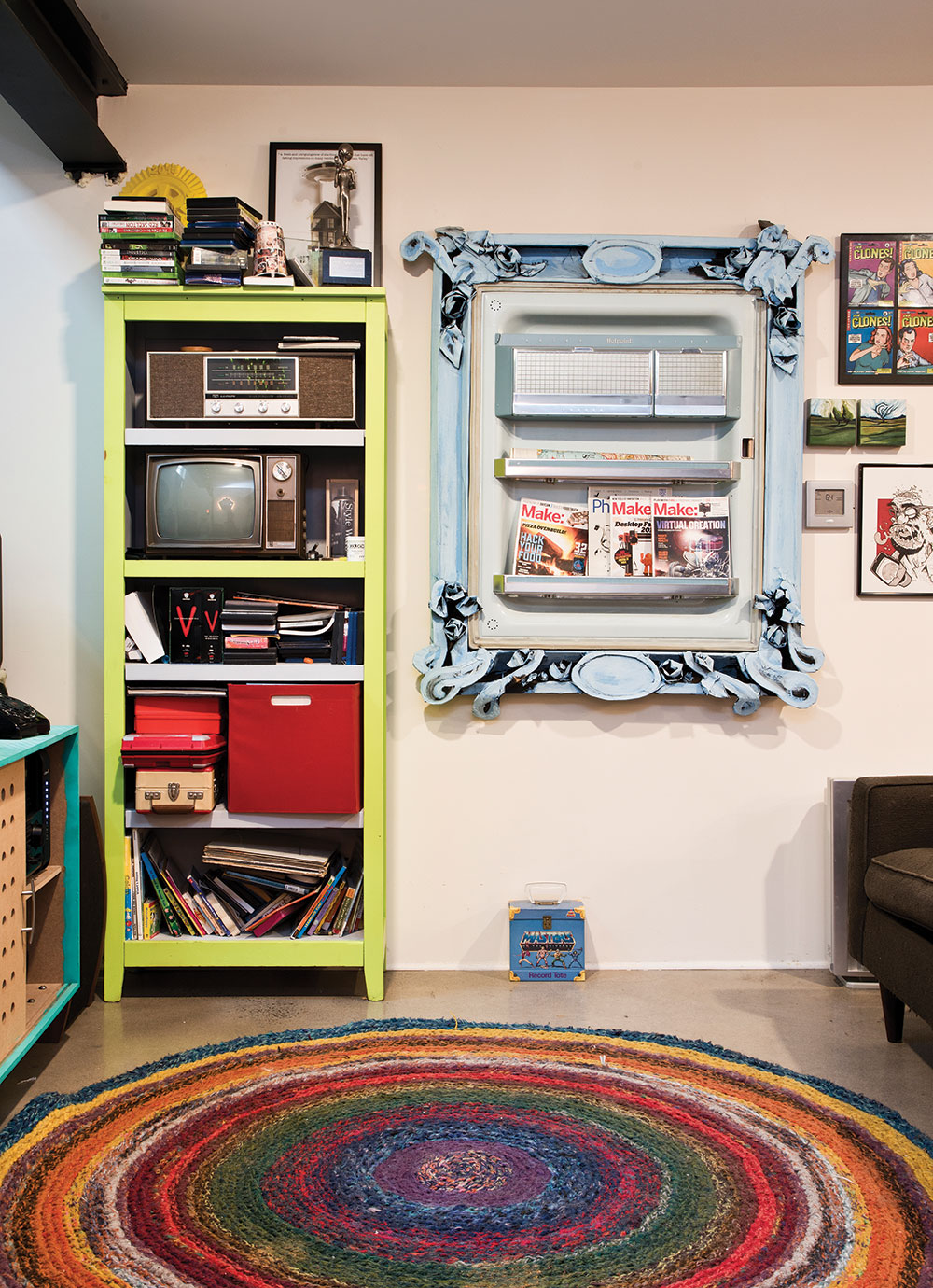 Olivieri has had a robust career in the arts. He started out making props for the theater, has made a documentary of Hudson Valley UFO sightings, and operated a café and maker space in the Rondout. Now he combines teaching with tech and the arts, leading workshops at the Center for Creative Education and the Rondout Neighborhood Center. He has two 3-D printers and hopes to soon employ them in a full-fledged Kingston Maker space. Olivieri’s most recent creative work has involved turning old furniture into arcade games.

In June, Olivieri’s show “The Penny Arcade: Featurette,” displaying his handmade video games and marquee signs, will be exhibited in the Lace Mill mezzanine gallery space. 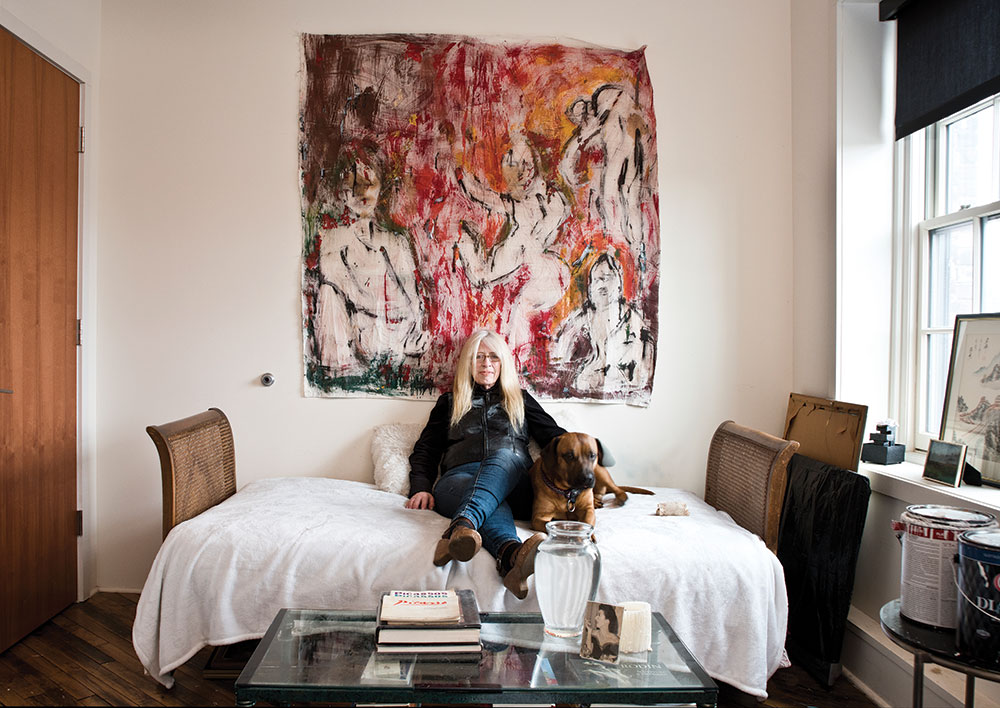 “I’ve been waiting for this all of my life, to be in a community of working artists. I got right into it,” Lynette Hughes tells me. We are sitting in her studio apartment, which faces east over the train tracks and has wood floors from the original mill. A row of windows lights up the white walls like a gallery, illuminating her four-by-five-foot abstract oil paintings, in various stages of contemplation and completion. “Every day I pinch myself,” she says, referring to her current home at the Lace Mill. “There are so many talented people. You feel a bond; we are doing something that’s vital.”

Hughes grew up in Europe, where her father was in charge of the USO and hired tutors to teach her about the local art. “I had an incredible education,” she says, “but I never saw modern art until I came back to the States. Then my perspective changed and I fell in love with Picasso.” After returning home Hughes sold her art, ran a gallery, worked in human services, and taught women’s workshops in art and journal writing. She also taught art to the developmentally disabled in Ellenville.

Her most recent creative work explores how domestic violence and abuse—both personal and institutional—infiltrates the minds of victims and their families. “It’s a long process of waking up,” she says, “through one’s work and art.” It’s a problem that seems epidemic to her. “So many people go through domestic violence of some kind, not just families but within their communities.” Hughes has two works from her current series on display in the boiler room gallery space, and is planning a larger show of her work in May.

The Right Side of the Tracks 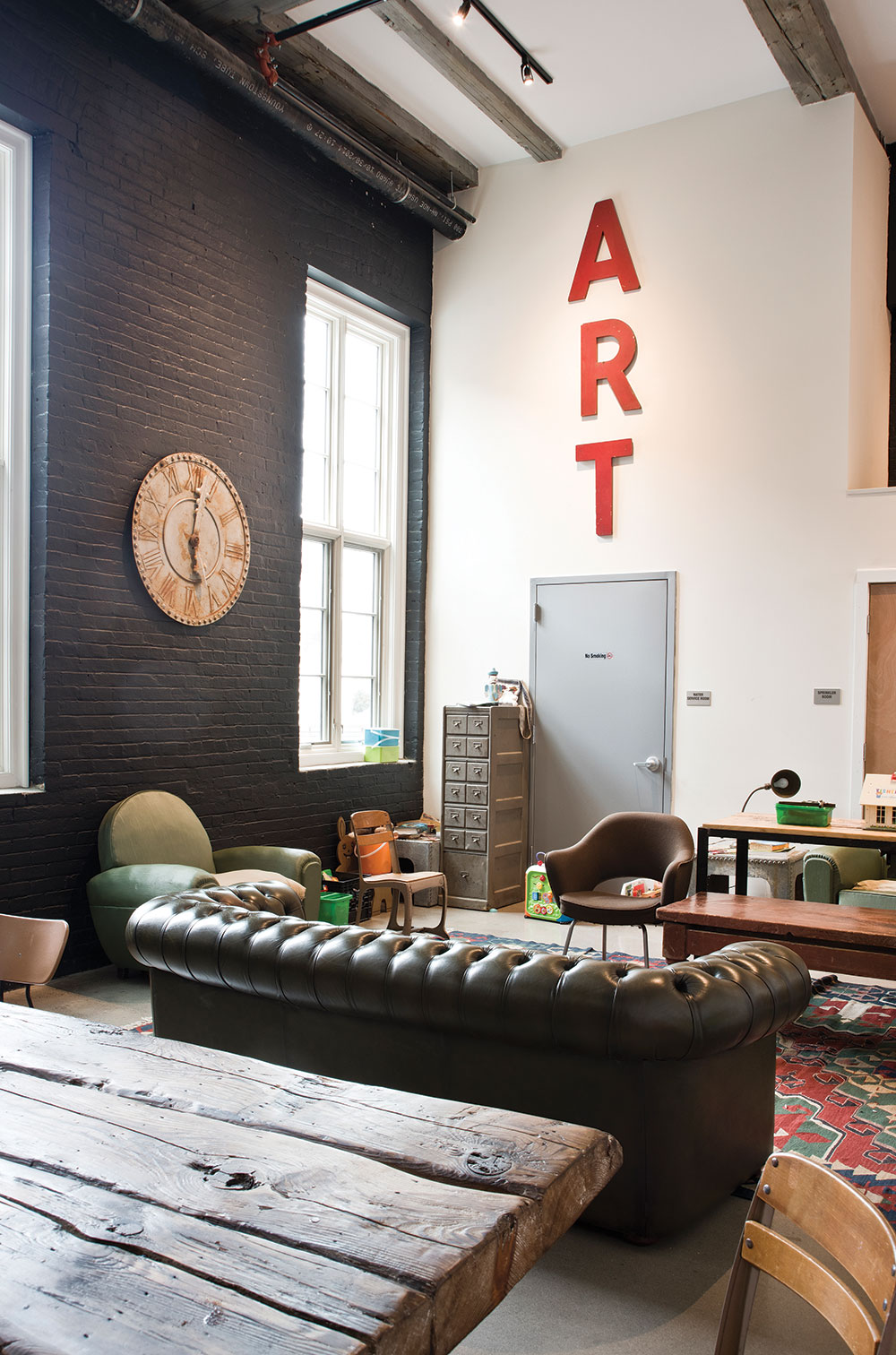 The RUPCO team designed the Lace Mill to be an anchor for the Kingston’s recently launched Midtown Arts District, the mixed commercial and residential neighborhood along the rail line and Broadway. As the neglected factories and warehouses are slowly being revitalized with new business and residents, the surrounding neighborhood is beginning to flourish, building on the longstanding success of businesses like R&F Handmade Paints, Bailey Pottery, and American Made Monster Studio.

Rather than displacing the existing community, RUPCO’s plan was always to usher in a graceful, natural transition that benefits new and longtime residents alike. As the project moves forward, they will continue to develop strategies that preserve and enhance the surrounding neighborhoods.

“Our goal was to demonstrate that this neighborhood in Midtown was of value and a high-quality place for people to live,” says Guy Kempe. “We’ve shown it can be done.”