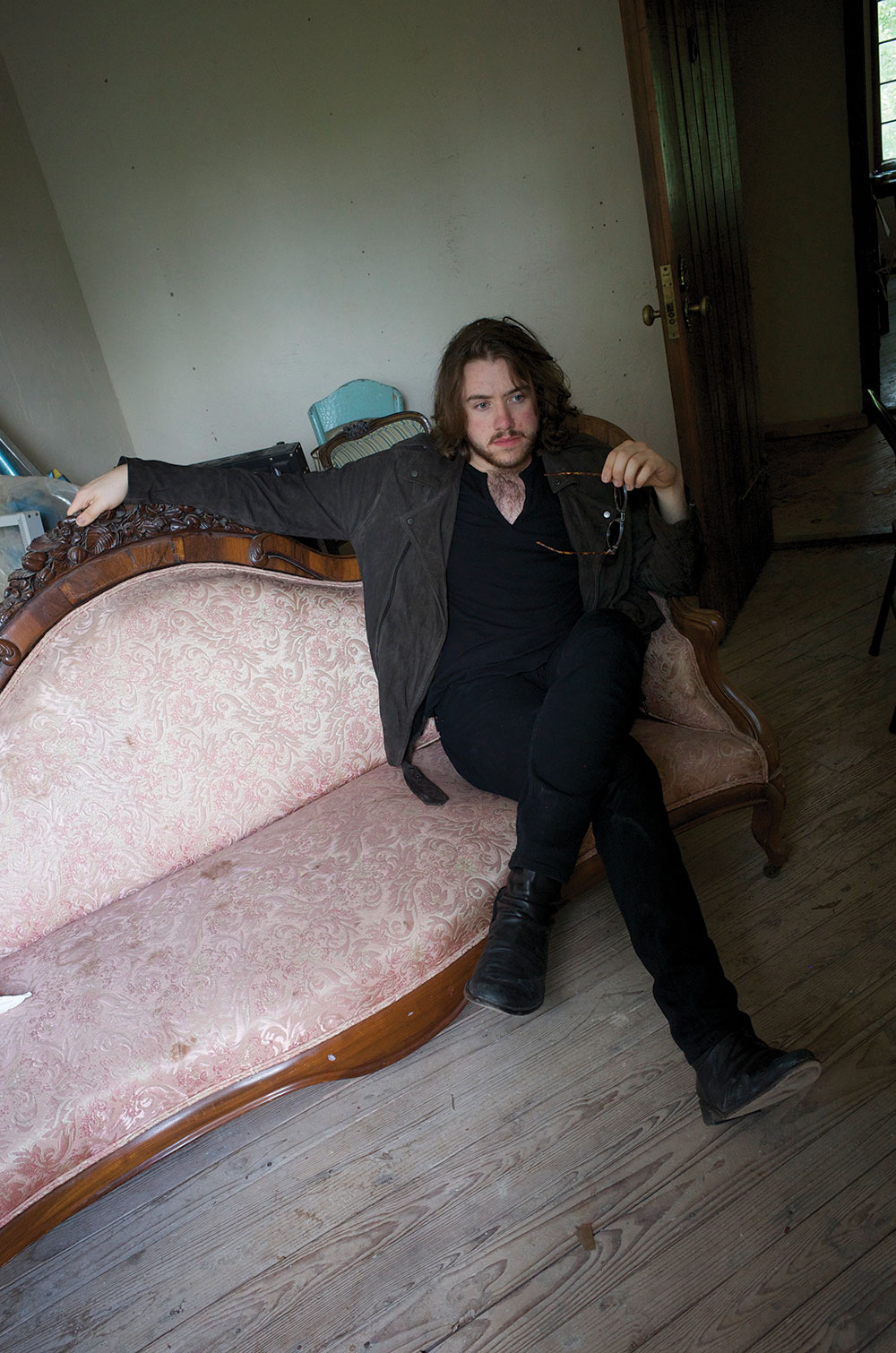 Craigslist is congested with castoff guitars made by First Act, the budget brand whose very name makes no secret of its products’ purpose as learner’s models for kids. It’s not hard to imagine the typical scenario that leads most of these crude instruments to their penultimate places in the virtual junk store: Kid sees pop star playing guitar on TV; kid begs parent for guitar; parent buys kid guitar; kid takes a few lessons; kid gets bored and moves onto something else; guitar goes up for grabs, ready for the next young would-be rocker to repeat the cycle. But then there are those rare cases where something sticks. Where the gifted meets the gift, and the music world is all the better for it.

“I think I started playing guitar accidentally, just to feed my obsessive nature,” says Connor Kennedy, whose first axe was, incidentally, an Ibanez. “It gave me something to do every day for three to five hours after school. I’m not into sports, which is what most of the other kids were into.” If that’s really the case, it was a happy accident indeed: Kennedy, who turns 23 this month, is one of the most in-demand guitar players on the Hudson Valley scene, a promising singer-songwriter, and the leader of one of the area’s hardest-gigging bands. And it all started in Saugerties.

Kennedy hails from the town’s working-class neighborhood of Barclay Heights, which lines the sides of Route 9W southeast of the village, on the opposite side of the Rondout Creek. “It’s kinda dumpy and there wasn’t much there—a bowling alley, a McDonald’s, and a few other things,” says the guitarist, who was subsumed by classic and hard rock (Alice Cooper, Led Zeppelin, Pink Floyd, AC/DC) before he’d even picked up the instrument at age 10. As luck would have it, just couple of years after he’d started lessons, there turned out to be a perfect incubator for his budding talent right in town.

At 13, Kennedy began frequenting the open mic night at the town’s Inquiring Mind bookstore, where he was able to try out his chops outside the solitude of his bedroom. “That was really the first time I’d ever been aware of any kind of scene happening in Saugerties,” he recalls. “And it was a great thing for a while, this weekly gathering of outcasts and weirdos and friends. It definitely helped me a lot early on.” He next began playing out as a solo blues performer, but rather quickly saw the limitations of the “blues prodigy” novelty tag. “That would’ve been easy, to keep doing that,” he says. “But ultimately I realized that if I did I’d never really be taken seriously as an artist. When I got to be 15 or 16, I refused to have posters that advertised my age.”

It being Saugerties, there was, of course, a legacy looming just up Route 212: that of Bob Dylan, Big Pink, Woodstock, and the Band. Kennedy, though, was only vaguely aware of it. “My family had moved here from North Jersey and they never went to the festival,” he explains. “We had the DVD of Hendrix playing at that, but the actual town of Woodstock? I had no idea it had ever been this big thing. It was just a place where there were stores that sold T-shirts of the bands I liked and had all this pot stuff in the windows.” Eventually, though, he found himself patched into to the region’s hallowed history when he began attending Levon Helm’s Midnight Rambles, earning his free admission in exchange for emptying the trash after each event at the percussionist’s famous Barn studio in Woodstock. “I’d gone there with my parents a couple times before I started working there, and that’s when I started to put two and two together as to who Levon was and what made him and the Band so great and important,” Kennedy says. “In the parking lot I’d meet people who came there from Kenya or Europe or Japan just to come to the Ramble and see Levon. I’d sit right behind him every night and watch him play. That whole experience taught me so much, it was an amazing opportunity.”

When Amy Helm caught his first proper performance, a set at the town’s farmers’ market, the singer and daughter of the late Band drummer instantly took notice. “I’d met Connor at the Ramble but I’d never seen him play before that,” she says. “I think anybody who sees him sees something very special there. Besides being such an incredible talent as a player, he has an intuitive understanding of how to work with other musicians that’s way beyond his age.”

It wasn’t long after his live debut that the singer and guitarist assembled his first band, Depot Street. “Even when I was just starting to play on my own I knew wanted to have a band at some point,” he says. “And I knew that, since I wanted things to be a certain way, I had to be the leader. I was lucky back then to play with a lot of older people, like [organist] Jeremy Baum and [bassist] Kyle Esposito, which made me a better player than I would’ve been if I’d only played with people closer to my age.” His road baptism came in 2013, when Amy Helm invited him to tour that summer with her band. “I’d never been west of Pennsylvania, so just to go to places like Montana and Colorado was pretty incredible,” says Kennedy.

Under his own name, he debuted with 2013’s Nothing Lasts: Nothing’s Over before forming his next outfit, Connor Kennedy and Minstrel, with drummer Lee Falco, bassist Brandon Morrison, and organist Will Bryant. The unit recorded 2015’s Live in Utopia at Todd Rundgren’s former Bearsville soundstage and, soon enough, another fortuitous connection came along.

“Mike Scott from the Waterboys had asked Amy to tour with his band but she wasn’t able to do it so she suggested us,” he says. Thus, he and Minstrel ended up doing opening slots on North American tours with the Waterboys as well as the Gipsy Kings, who were handled by Helm’s booking agency. “[The tours were] amazing, we spent two solid months on the road,” he remembers. “Drove the van, like, 15,000 miles. Loading the Hammond B3 and Leslie speaker in and out by ourselves every night wasn’t exactly fun, but the audiences really loved us. We totally sold out of CDs, too.”

The tours and constant dates around their home region as both headliners and openers for national and international acts have led to Kennedy’s accompanying such luminaries as, Kate Pierson, Donald Fagen, and Deborah Harry. Additionally, he, Falco, Morrison, and Bryant have become a formidable band for hire, backing Little Feat’s Bill Payne and, next month, Fagen, with whom they will tour as the Nightflyers in the US and Japan. The latter coupling is especially precious to Kennedy, a devout Steely Dan fan, who, in addition to Fagen counts as his favorite songwriters Roger Waters, Warren Zevon, Bruce Springsteen, Bob Dylan, Leonard Cohen, and Tom Waits. “Everyone just thought I was a blues player when I was younger, but even then I was focused more on songwriting than playing,” Kennedy says. “Donald offered to help me with writing, and for a while I’d bring lyrics and riffs over to his place to work on. That was great, but nothing really came out of it—except that it made me realize no one can show me how to make my own music. I have to learn that by listening and doing it on my own.”

Kennedy and his band’s soulful, rootsy style has seen them filed in the brown-suede bag of new Americana, and much of reason for this also is simply down to their Woodstock-area heritage. The bandleader, though, chafes at the lazy association. “There’s this retromania about the whole Americana thing that’s pretty closed-minded, I think,” he offers. “I call it ‘dry rot Americana’—this feeling that I can’t like certain kinds of music and still make the kind of music I want to make. I think the Flaming Lips deserve to be called an Americana band as much as anyone. I’ve been influenced by them as much as I have the Band and Gram Parsons.”

Somewhere, Kennedy’s new album under his name (he and his band have dropped the Minstrel moniker), will be released this month. Financed via crowd funding and coproduced by Kenny Siegel (Langhorne Slim, Chris Whitley), it features guest appearances by John Sebastian and Amy Helm and shows the songwriter and guitarist’s craft marked equally by his innate skills and stage-honed maturity.

“I’m not into religion, but I think everyone’s got a track they can follow,” he muses. “You just have to keep your mind open and stay on it.”

Somewhere is out July 14. Connor Kennedy will headline a record release event at the Old Dutch Church in Kingston on July 15. Donald Fagen and the Nightflyers, featuring Kennedy, Lee Falco, Brendan Morrison, and Will Bryant, will kick off their 2017 tour at the Capitol Theater in Port Chester on August 3 and 4. More details on Facebook.