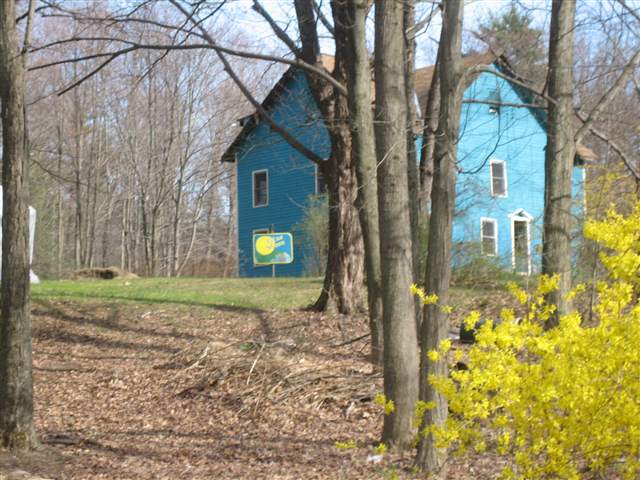 We know that our readers get most excited about properties under $250,000, but those are hard to find in Rosendale, unless the place is right on a busy road or in need of gut renovation. This property, abutting the dramatic Shawangunk Ridge, may be a tad more than I personally would like to spend, but I’m thinking it’s (almost) worth it. Although you can see from aerial view that there’s another house nearby, that’s pretty much the only mark of civilization. It’s on a small road off another small road, with six acres and six bedrooms, and I happen to love the color (I know, the least important factor in purchasing real estate). Plus: a pond!

I liked the exposed beams, though it looks like it has low ceilings, and it would need a few appliances (my country kitchen must have a dishwasher since my city kitchen doesn’t) and some cosmetic tweaks. They seem to be making some claims that it is functionally passive solar (something else I really want in an upstate New York vacation house) and despite its size, heatable mostly by wood stove. I like that it has so much room to bring friends up, but I also think this is a good candidate for shareable real estate. Imagine getting a place 26 weeks a year, tucked along a mountainside, for, let’s say, $150,000 (plus all the other expenses, of course). It was listed on June 1 and has already been lowered $20,000. I’ll be curious to see what it goes for.

Here’s an important tidbit of information on this place:

It’s being offered by the owner/broker, who is willing to sell it with only three of the acres for $249,500. Then he’d keep the other three, with its buildable lot, to himself. He promises not to sell that lot to someone else, but will eventually build his own house there. If you can swing it, I’d say buy all six acres and built a guest house.