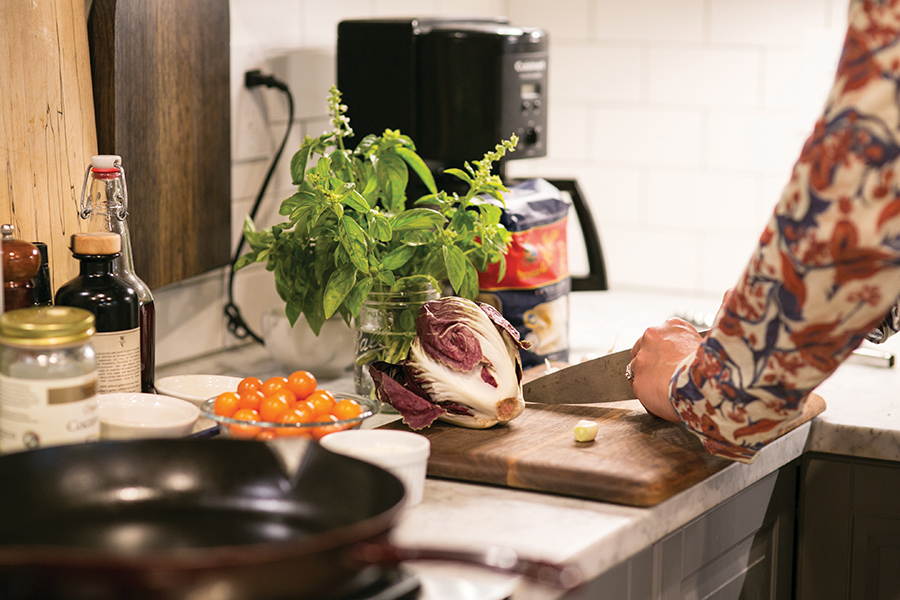 When it comes to creating recipes, most cookbook writers are exacting, expecting readers to follow their instructions to the letter. But not Colu Henry. As the author of Back Pocket Pasta: Inspired Dinners to Cook on the Fly (Clarkson Potter), published last summer, she’s all about jumping in, improvising, tasting the sauce, and above all, eating. Henry honed her culinary acumen as special projects director at Bon Appetit. But she’s also an entirely modern, joyful, social, savvy cook who gained fame by plating delights for the social media buffet table of Instagram. Her cookbook began as a hashtag.

“I was working at Bon Appetit,” Henry told me in late September, during one of her rare pockets of downtime. “I was coming home really late after work and I was exhausted. But I didn’t feel like getting takeout all the time. I wanted to cook something soulful and simple, something comforting and good. I grew up in an Italian family and we had pasta two to three times a week. So I started looking in my pantry, using whatever I had.”

But of course here the road diverges: Unlike most mortals, Henry’s impromptu pasta dishes were more like alchemy than well, okay, I’ll eat it necessity. While the pasta water boiled, she’d chop this, sprinkle that, dollop this, shred that, and achieve a symphonic harmony of noodles and stuff. About five years ago, she began posting the dishes on Instagram—then a relatively new social media—to show people what she was making for dinner.

“And I started a hashtag, #backpocketpasta,” she says. “People started using it for themselves. Suddenly it was really taking off. A friend said, ‘You know, this really ought to be a cookbook.’ I got a real bee in my bonnet.” 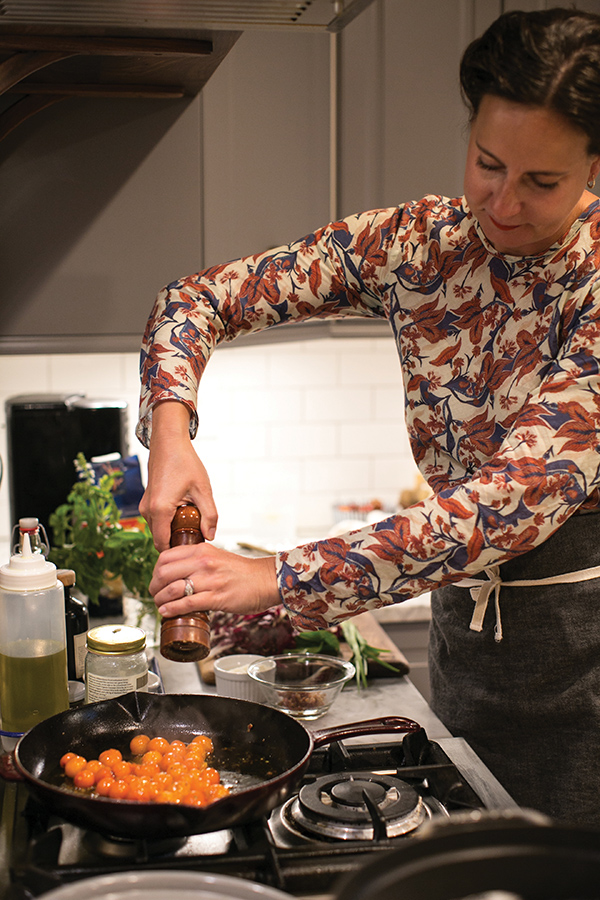 Colu Henry cooks an entirely unplanned but inspired meal, using whatever fresh ingredients are on hand, at her home in Hudson.

Creating the Back Pocket Pasta

Then, at a book party, says Henry, “the stars aligned.” She worked the room, wine glass in hand and goal in mind, landing both an agent and a publisher by pitching one of its cookbook editors on the spot. She enlisted the help of some talented friends and colleagues, worked up a well-designed proposal with sumptuous sample photographs, and Clarkson Potter, an imprint of Penguin Random House, loved it.

With the same matter-of-fact intensity with which she can study her pantry shelves, grab a hunk of something from the refrigerator, and then conceive of a sublime concoction like Orechiette with Fresh Corn and Burrata (on page 116 of Back Pocket), Henry threw herself into making the book. From start to finish, Back Pocket took two and half intense years. From the beginning, she wanted to provide choices and ease, not regimentation. There’s a running theme here: Henry knew as much about what she didn’t want as what she did. It makes for a perfect mix: a cookbook that inspires you to take your own ingredients and your own ideas, and cook off the page. Rules are meant to be broken, notes Henry. So go break ’em.

Back Pocket is divided not by purpose but by place. A section on dishes collects the flavors of her Italian heritage, tracing back to her ancestral roots in Teora, located in the southern Campania region, and the tenements of the Lower East Side. Another section conjures up the quick and effervescent spirit of Williamsburg, Brooklyn, where Henry and her husband once lived. There’s a section on cooking while traveling—wherever Henry goes, she tends to cook a meal, jamming with her host over their stove. But the section that’s the most joyful focuses on Hudson, where she now lives full time. It’s a farm-to-table, peruse-the-markets-and-fill-the-basket celebration of a good life in the country, and it’s irresistible. 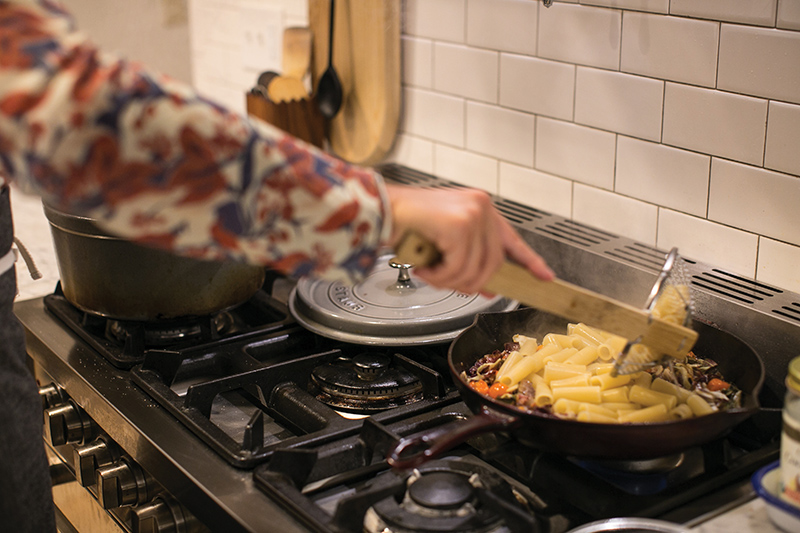 When Henry and I got a chance to chat, she had just tossed together a quick and earthy pasta dish with pancetta, burst sun gold tomatoes, radicchio, and summer herbs—not by following a recipe but by foraging ingredients, Back Pocket Pasta-style, from her fridge. Immediately, she began riffing on the process, making anyone within earshot instantly hungry—especially me. “I just start looking in my pantry,” she says, proving the approach is not a gimmick, but a way of life. “I found some leftover pancetta and rendered it in olive oil, took that out and added in these gorgeous sun gold tomatoes from the market, so they cooked down in the pancetta fat and burst, and then I realized I had a radicchio from Sparrowbush Farm [outside Hudson]—I just love them. They do a winter CSA every year and I just signed up.”

Henry diverged into talking about her shopping routine, which involves hitting the local farmer’s market and then meeting friends for a beer at Suarez Brewery in nearby Livingston—thus turning an errand into an event the same way she turns pasta into, well, something better. And then we were back to the process at hand: “I added some chopped garlic [also from Sparrowbush, garlic freaks take note], and then the radicchio cut into wide ribbons, hot pepper flakes, some of the salty pasta water as the pasta cooked to help the leaves wilt.” To that fresh and end-of-summer perfect mix, she returned the pancetta, tossed in the pasta, grated some Locatelli pecorino and let the cheese emulsify into silk, and then topped it all off with some torn basil leaves. “Just what I had around,” she says with a certain pleasure. 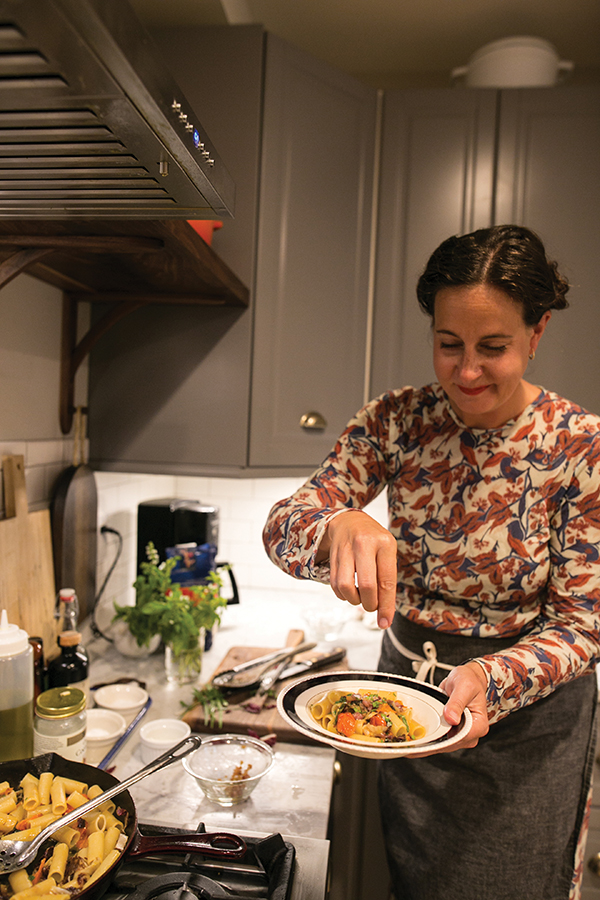 Doing it Right & Doing it Fun

There is a relaxed precision to how Henry cooks: as she talks, her fingers are always busy. She’s a connoisseur of good gear, and the kitchen in her Hudson home is renovated dream of efficiency and space: marble, dove gray cabinets, a Verona stainless steel range, Staub pots and pans. But she has no tolerance for preciousness or rigidity, noting the present-day obsession with Chemex coffee makers with a certain pragmatism: “I’m not fancy about my coffee in the morning, I don’t have the time.”

Henry’s book is filled with tips that preach this same blend of doing it right and doing it fun: Never drain your pasta and then rinse in cold water and coat it with oil. That is a sin that ruins its starchy goodness and means the sauce can’t stick. But on the other hand, if you want to switch one ingredient for another in a recipe, by all means do.

“I don’t generally follow recipes myself,” Henry says. “I did write a book with them, but it’s to encourage people to figure out what works well and have fun with it. Don’t measure so much. Eyeball it. Yes, baking is a different story—that’s chemistry, which I didn’t do well in at school anyway. But I think really having fun with something, and not being so caught up with the nitty-gritty, that’s great.” Opinion given, she gets back to business—preparing for a trip to Portland, Oregon, for a food festival. After that, she’ll be focusing on the renovation of Otto’s Market in Germantown, which she and her husband recently took over with some friends. That will be yet another labor of love, in which Henry turns one thing into something else that’s full of surprises and entirely better. 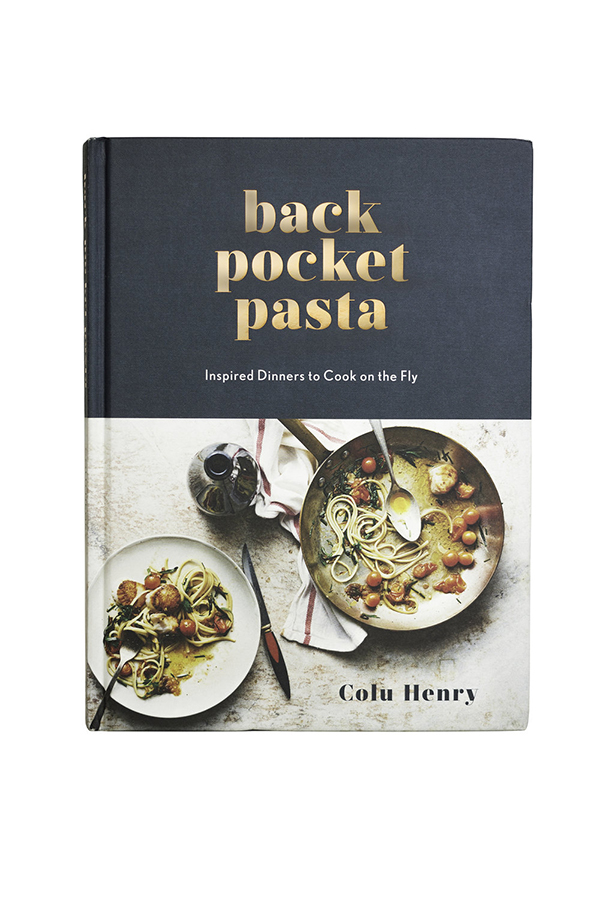