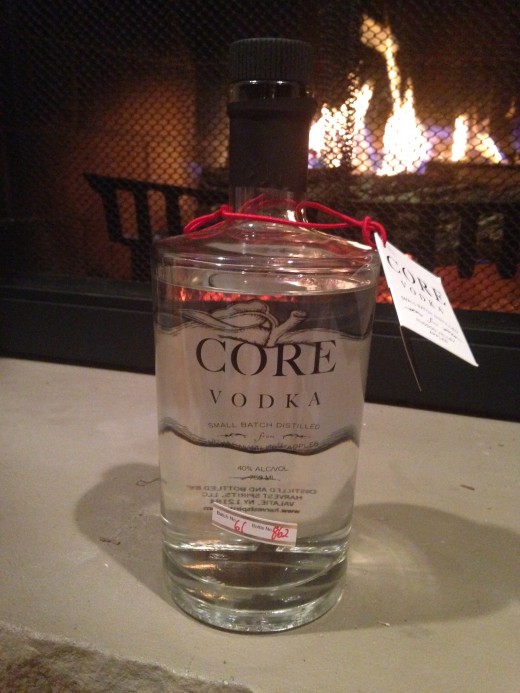 I believe it was Socrates who first asked, “What, technically speaking, is vodka?” Harvest Spirits up in Valatie has definitely made the answer more complicated. For years now they’ve been producing Core Apple Vodka, which is about as distant from your Ketels, Absoluts, or Stolis as you can get. Traditionally, vodka is defined only as a neutral spirit made from, well, whatever. Potatoes are the most famous ingredient, but many are distilled from grains as well, and more exotic materials are becoming more common. The word neutral, too, is increasingly being stretched. Many producers are choosing less distillation and minimal filtration to preserve the characteristics of the original ingredients.

Distilled directly and solely from apples, Core Vodka is a perfect example of why. The apple flavor is preserved beautifully and is allowed to shine through, but without being overpowering or heavy-handed. It’s certainly more subtle than a cider, for sure, but is absolutely distinct. The first word that comes to mind is FUJI! It presents this apple’s subtle sweetness and smoothness in a way that highlights its unique characteristics. The texture too has a touch of starch that provides for a pleasing and substantial mouthfeel that will make you think twice before mixing it into a cocktail. The way these components interact makes for a truly exceptional spirit.

Most large-scale producers will simply dump (often artificial) flavors into their typical vodka, as if I can’t squeeze a lemon myself.

This probably has a lot to do with their process. If you are like me, you think of flavored vodka as kind of a dirty word. Most large-scale producers will simply dump (often artificial) flavors into their typical vodka, as if I can’t squeeze a lemon myself. Harvest Spirits, on the other hand, actually distills their vodka from the apples, which are harvested from their own apple trees making them one of the few farm-to-still producers in the state (if not the country). It can take up to sixty pounds (POUNDS!) to make a single bottle, which is handy for anybody struggling to meet their daily fruit requirement. It counts, right? This process definitely bears out, producing that wonderful Fuji taste and texture as opposed to barely food-grade grain liquor with added malic acid. But don’t take my word for it. Visit Harvest Spirits’ tasting room Saturdays and Sundays from 12-5 to try this and some of their other liquors. Also let us know about the peach brandy, it looks delicious.

My favorite way to drink Core vodka is chilled and neat, but it goes beautifully with drier ciders. It’s great as a collins with Martin’s sparkling cider, or if you are feeling over-achieverous you can chill it with a Yankee Folly cider wash and pour it up with a Bad Seed dry-cider top. Either way it’s a must-have and another great liquor out of the Hudson Valley.