Way down in the depths of my heart, past the many layers of love and wonder for all the animals, I have to admit that I am a dog person.

I love dogs. I love their courage and their honesty. And their constant readiness. They are just up for anything, anytime. Leap up from a deep sleep to dash outside at 2 am on a frigid night to face down some unnamed predator? No problem, if you’re a dog. I admire that.

This is our dog Cleo. 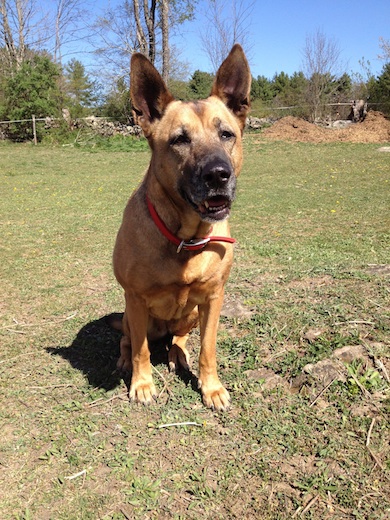 She is a shepherd-pit bull mix. Just like us, she is a Brooklyn transplant. She was rescued from a junk yard in Bed-Stuy nine years ago by my friend Samantha. (Perhaps you, too, have a dog rescued by Samantha? Many people do.) Cleo was a puppy then, in a litter of six, with a skinny mom and no shelter, at the end of a brutal winter. Three of the puppies were already dead.

Samantha and her friend climbed the fence and took the mom and the remaining pups. The owner of the lot came running out and said he was going to call the police. He was going to get $500 for each of those pups, he said.

Samantha’s friend took out her cell and said, “I’ll call the police for you. This is animal abuse.” The police came, and told Sam and her friend to take the dogs.

That was nine years ago. As soon as she was weaned, Cleo came to our house. She’s been with us ever since.

One of the many things pressing us to move out of the city was Cleo. Some dogs love living in the city. I used to have a pit bull who wasn’t much for the woods. What he really liked was a crowded city park with lots of people who’d come and fawn over him. Cleo loves people, too, but she loves running and tracking and bounding even more. When we used to come back to the city in early September, after a month of hiking and swimming in New Hampshire, she would mope for weeks, totally depressed. It was terrible to see. 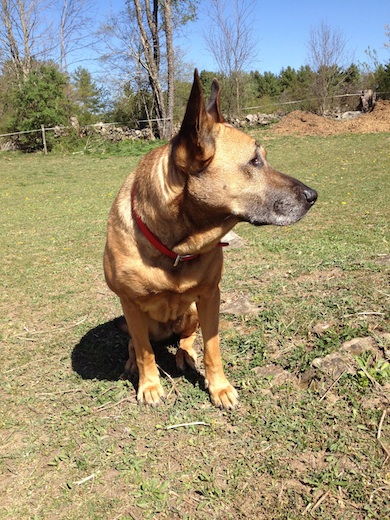 She now lives as close to an ideal life as a dog could ask for. More and more she is becoming a farm dog, settling into her responsibilities around here.

Lately we’ve had a fox lurking around our property. It’s taken a few of our chickens. One day, Megan and I were heading down to the stable and we heard a terrible commotion. The chickens were clucking up a storm and running across the pasture towards us at full speed, so fast their feathers were smoothed back.

Never rely on the chivalrous notion that a rooster will protect his hens. The roosters were in the front of the pack, a whole bunch of little George Costanzas elbowing the hens out of the way.

I got closer and realized it was that damn fox. He had a hold on one of our hens. She was madly struggling to get away.

Okay, so I am afraid of wild animals. Call me a wuss, I just don’t want to get too close to something that might have rabies, or at least be very hungry. But I needed to save my chicken! I dropped the seedlings I was carrying and grabbed a scrap of wood. Waving it around like a banshee, I ran towards the fox and hen, yelling and screaming– without getting too close, of course. The fox had a good hold on the hen, and wasn’t letting go.

— And suddenly, from the corner of my eye, this explosive thing streaked past me, heading towards the fox. It was Cleo! Hurray, Cleo! Good dog! Good dog! Cleo is not afraid of wild animals. She thundered across the pasture, and gave chase to the fox, who promptly dropped the hen and ran. 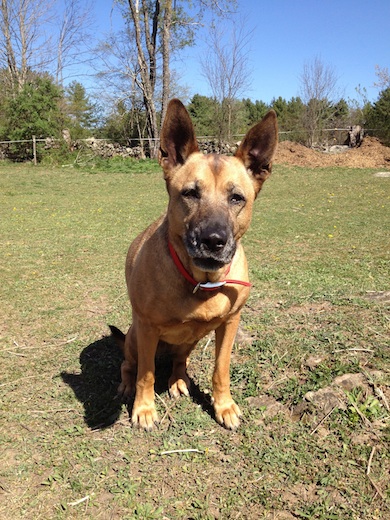 We haven’t lost a chicken since. Cleo sometimes lies in the middle of the pasture looking around, on guard. In the house, if she hears anything unusual happening down at the stable, any clucking or whinnying that sounds funny, she will roar to be let out and then race down the path, barking ferociously. By the time we get down there, she is in the middle of the pasture, ruff up, surveying for trouble.

That is one fine farm dog we have.