One of the great things about living on a farm is that we get to really experience the cycle of life. Birth! Life! Motherhood! We love that. 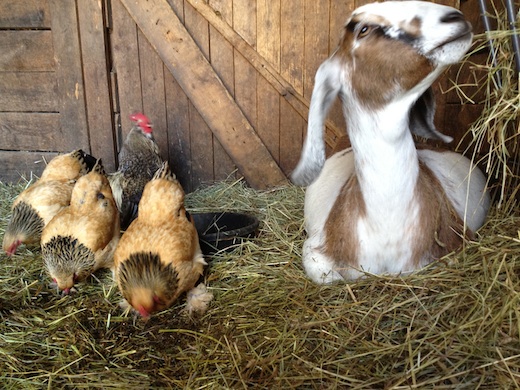 But birth and life aren’t the whole cycle. There’s the other part, too, and no getting around it.

(Warning: this post is sad. But there’s sugar at the end. I promise.)

I blogged a couple months ago about how our two goats were expecting kids this spring. 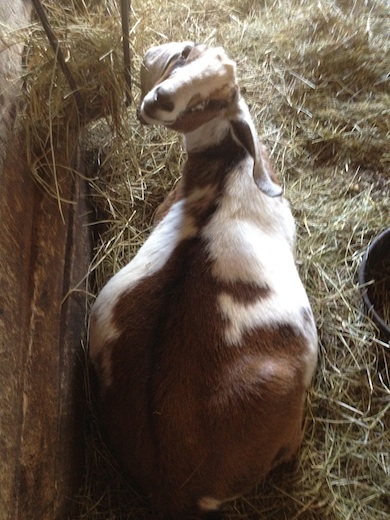 Here’s Jeanie a couple weeks before she was due.

Not too long after this was taken she started showing signs of labor — a week earlier than we’d expected. Over the phone, our local goat vet was unconcerned. Goats can deliver healthy kids a week early. But as the day progressed it became clear that something was wrong.

I called the vet back, but they had closed for the day. I called Erica, a nearby goat farmer I knew, and told her I thought something was wrong. “Let me call you right back,” she said — and then didn’t.

Jeanie was on the ground now, bellowing with each contraction, but completely undilated.

I called Elaine, a vet friend who lives 45 minutes away. “Is that her?” she asked, hearing Jeanie hollering in the background. “Oh no. I’m coming now.” I’m sure she had a full schedule of appointments, but she left them all.

I hung up with Elaine and looked up to see Erica, the goat farmer, trotting down the hill. “I couldn’t find your number,” she shrugged, “so I just came over.” Thank you, Erica, for coming and helping.

By now Ernie, 13, had his hand up Jeanie’s backend and was trying to dilate her cervix, as Elaine had directed over the phone. Hey, they’re his goats, and he wants to be a vet when he grows up.

Erica took one look and told us immediately what we already suspected: no, this is not what normal labor looks like. She took over with the dilation attempts, with no better results.

Jeanie was beginning to foam at the mouth. The contractions were racking her body, and she was making unearthly, terrible sounds.

Elaine heroically made it to our house in 35 minutes, and was instantly kneeling beside Jeanie, pulling vet magic things out of her black satchel, things that would make Jeanie better, right? But even vet magic fails sometimes.

“She’s really sick,” Elaine said warily, looking at all of us carefully. “Really, really sick. We have to make some decisions.”

We were debating whether to do an emergency C-section right there in the barn or take Jeanie to Elaine’s office, when Elaine started shaking her head. She was kneeling at Jeanie’s side, taking her pulse. “She’s not going to make it.” She looked up at me so sadly. “Larissa, she’s dying.” Ernie used to apprentice at Elaine’s office. She knew the goats were his project, and that he’d raised both Jeanie and Ruby since they were bottle-fed kids, after wanting goats for literally years. She knew he’d been counting the days until their births, had been getting up at 6:30 every morning to do all the chores to prove to us that he could handle bottle-feeding the coming kids.

Thank you, Elaine, for trying so hard, and for understanding how much Jeanie meant to us.

We asked Elaine to try to save the kid. She did a post-mortem c-section, and pulled out one tiny, tiny, black and white, gorgeous little boy kid. I will never forget the sight of Elaine and Erica holding the kid between them, toweling him dry, looking at each other every now and then, shaking their heads — and then once, both gasping, nodding and renewing their efforts. We even raced up to the house all together and put him in a warm bath and swished him around, with acupuncture needles in his nose. We couldn’t bring him back.

We buried Jeanie and her kid in the pasture that night. Megan said we should plant flowers there. We will. Ruby, our other doe, was howling the whole time, looking for her best friend.

“It’s the hardest part of farming,” Erica said, hugging me hard before she left to go feed her kids and milk her does.
Goodbye, friendly funny Jeanie. I’m sorry you had to go that way, and that we couldn’t save you. We loved  you. And so did Ruby. 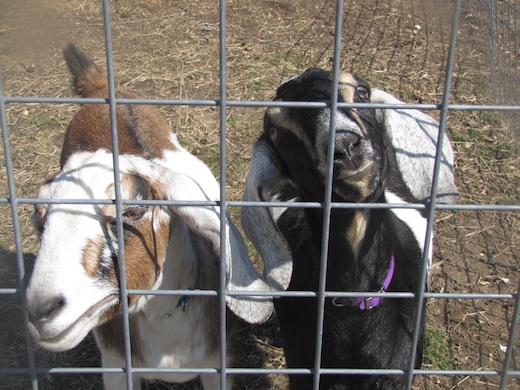 Part 2 (The other part, the sugar)

So the thing about goats is, they are herd animals. They can’t be alone, anymore that humans can.

Ruby was now alone. As devastated as we were about Jeanie, we had Ruby to think about. 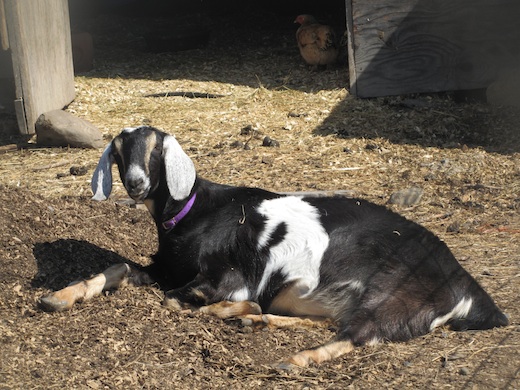 And she was pregnant. And if we wanted to make sure she didn’t develop the same totally unlikely condition that Jeanie had (ketosis), one thing we could do was to keep her from getting stressed. We needed some companions for her.

And then the other thing about goats is that male kids aren’t as wanted as the females. We knew that Erica’s herd had delivered a bumper crop of bucklings this year. She had 15 little guys she was trying to find homes for. If you can’t find homes for bucklings, they may end up as meat, and Erica was hoping to avoid that outcome.

What else were we going to do? Still grieving over Jeanie, and worried about Ruby– who was still yelling for her friend, we headed over to Erica’s … to pick out a couple boy kids. 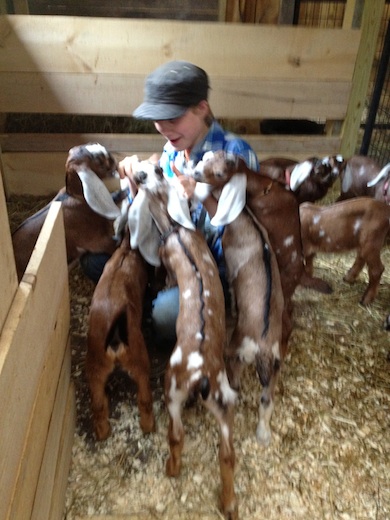 It was almost impossible to choose. 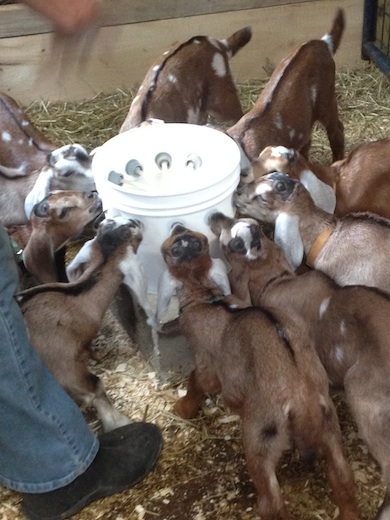 But we finally did. 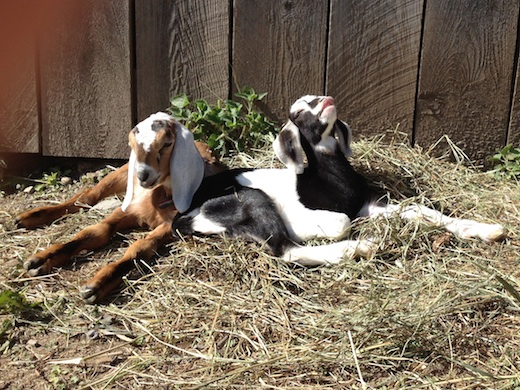 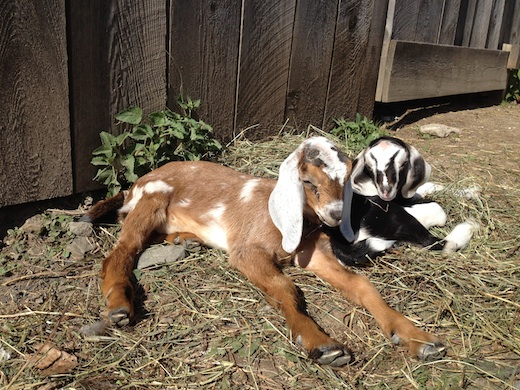 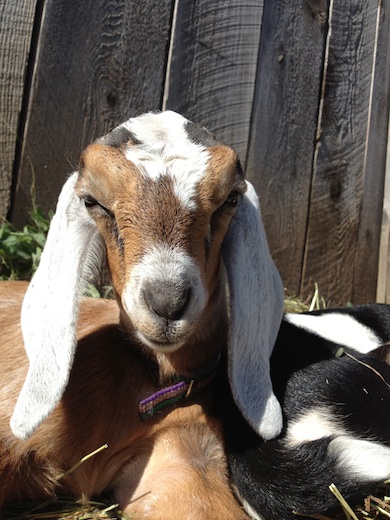 We housed them in the same stall as Ruby, but for everyone’s safety separated them with a welded-wire panel. She quickly became accustomed to them, and the new herd was formed. We took them all on walks through the woods, and Conor and Jimbo– when they weren’t leaping and hopping and doing crazy wiggles in the air — would stand next to Ruby and imitate everything she did. I’m eating— chewing convincingly, but with the raspberry leaves falling out of their mouths. 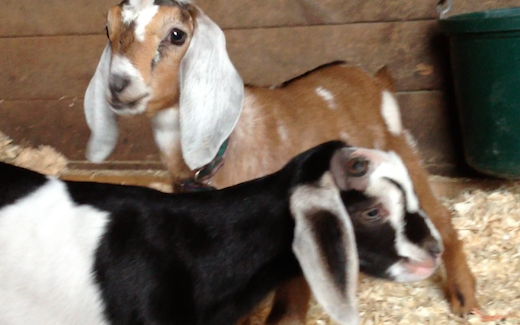 Goat kids should be prescribed to cure all forms of sadness.