Each week, Greene County resident, writer and ex-Brooklynite Larissa Phillips tells us tales of life in the country. This week: a fond farewell to a favorite hen.

Some signs of bad things to come: first, a rustling in the bushes by the stable one morning. Then, Megan announced she’d seen “something greyish, like a small dog”, running on the edge of the pasture. The day after she saw a bushy-tailed something across the street. Then, our dog came in with her tongue hanging practically to the floor, and fell over, panting heavily for 15 minutes like she’d just sprinted ten miles; she’d obviously chased something.

Finally, two mornings ago, no sign of Cloud, the white silkie hen we’ve had since Brooklyn.

Why is it always our favorite hens?

Cloud’s life was like a story book. She started out as a factory-farmed chicken destined for the soup pot. As fancy-looking as they are, Silkies are popular with the Chinese communities, who use them for a special kind of health soup. But Cloud’s destiny held something else. She was seen in the window of a Brooklyn slaughterhouse on Hamilton Avenue by a passing teenage girl, who bought her for $7.

The girl happened to be the daughter of one of the secretaries at my kids’ school. So Cloud went, in one afternoon, from a crowded slaughterhouse under the Brooklyn-Queens Expressway to a public school in Carroll Gardens, an urgent phone call being made on her behalf.

I had five backyard hens at the time, and I had been known to bring my chickens to events at the school. I was the Chicken Lady. I was the first person they called.

“How would you like another chicken?” the parent coordinator asked me. “She’s a fancy breed. With kind of a top hat?”

So we took her home. My kids named her Lucky Cloud, Cloud for short.

It was immediately clear she’d been raised in a factory farm. She didn’t know how to scratch in the dirt, for one thing. This is instinctive chicken behavior, but factory-farmed chicks are often raised on wire floors, and never get to scratch around. After a few days of observing our five hens, Cloud figured it out and began scratching.

And she didn’t roost. Chickens like to sleep up high, where they feel safe. Cloud just huddled on the ground in a corner of the coop.

We quarantined her from the other hens for a month, but even after we tried to put them all together, Cloud never assimilated into the flock. Cloud was… weird. She was like the loopy, unpredictable girl in high school with the vintage hat collection, who talks in foreign accents for no reason, and says weird things and doesn’t care that no one thinks they’re funny. She did her own thing. Every now and then she would freak out on the other hens, just go berserk, pecking and clucking at them. They, the normal kids, the mean girls, steered clear of her, except for occasional bouts of mean girl attacks on her.

Here’s a cool thing about Silkies: they’re known for going broody. This means they want to sit on eggs until they hatch, and then bring up the chicks.  Silkies, even though they are bred industrially and should have lost this obsolete biological function by now, love to go broody.

Cloud was no exception.

Within a few months of living with us, she sat down in the corner of her little coop  and refused to move. She’d stagger out once a day, looking like hell, like she was hungover, and run around screaming at the other hens, scratching at the ground, eating stuff, take a gigantic poop, and then inexplicably, like she was obeying some inaudible rumba line, go bobbing and strutting back to her nest. We didn’t have any roosters, which are of course required for fertilization, so Cloud’s efforts never amounted to anything.

When we moved upstate, we packed the chickens up in the car and took them with us. That was when we saw just how desperate Cloud was. She’d pulled little rocks into her nest and had been sitting on them. Aww! It seemed so sad. She really wanted to hatch chicks.

Of course, upstate, we got roosters right away. And Cloud went broody right away! And we put our own hens’ fertilized eggs under her!

And look what happened! 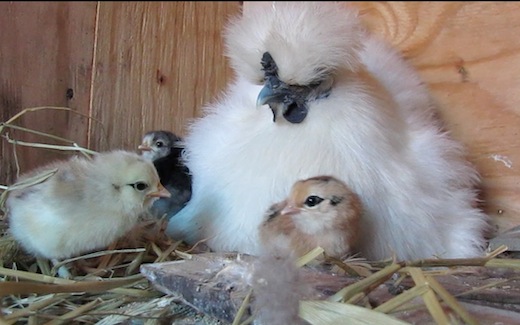 It was amazing. On the day the first chick hatched, we had friends visiting and our landlord had friends visiting, and we all went up the hill to the coop, and took turns peeking in to the coop to see that first little chick looking out at the world. It was this sunshiny happy moment, like a birth had happened in the little village. If we’d had a Maypole and a Celtic flute we would have broken them out and started dancing in circles.

After that, Cloud hatched and raised several broods. She was a spectacular mother hen. She fussed and clucked at her offspring, and led them around the yard showing them where to eat and drink. She would attack any rooster or hen that came too close to her babies. She reminded me of a Depression-era mother with an old fancy hat, and a total obsession for the well-being of her sons. “Only the best for my babies!” You got the feeling that if you messed with her chicks she’d whip out an umbrella and start whomping you over the head with it.

Her last brood of chicks had two boy chicks that came from hens that were twice the size of Cloud. At night she’d sleep with her wings over her chicks. As the big chicks got bigger and bigger, her wings had to go up higher and higher. By the end, they were nearly twice the size of Cloud, these overgrown thuggish babies who were starting to crow and strut during the day, but still came in every night to roost under Momma’s wing.

We noticed she was missing last weekend. We had family visiting and were all kinds of distracted, and it was raining, but we all took turns going down to the coop to hunt for Cloud. I finally found a few of her white frizzled feathers in the woods, and nothing else.

Oh, Cloud. You were a real favorite. We’ll all miss you.