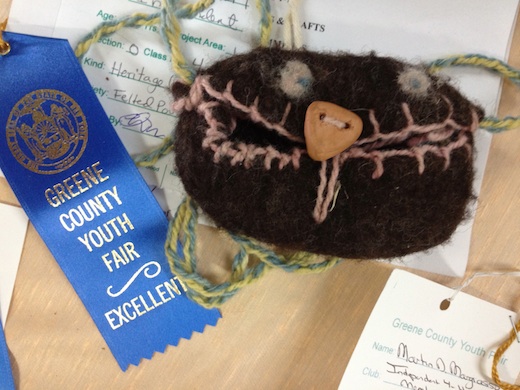 Well, we almost didn’t make it. Getting to the fair took more effort, handbook-deciphering, and frantic calls to vet, goat-breeder, and trusted fair-veteran friend than I would care to relive. But we made it there by the seat of our pants, and survived to tell about it. Those five days of fair turned out to be one of the most amazing, fun, incredible things we’ve ever done. Here, then, a brief run-down of our experience as first-time county fair-participants:

Wednesday was the day we were supposed to bring in the goats and the bunny. We figured out that morning that we had to shave our goat’s entire body to show her in the Dairy Goat classes. Oh god.

We watched a YouTube video, and then Ernie and I took turns holding our goat Ruby still (no small task) while the other one worked the clippers. It was so humid that sweat was dripping off our faces, and goat hair was flying and sticking to our sweaty arms.

All that effort, and we did a terrible job. Shave marks, uneven strokes, and she was naked. We couldn’t show her looking like she’d been massacred! (We later learned that one should shave one’s goat — especially the black ones — a week or so before the fair. Oh. Okay. Next time.)

I convinced Ernie it was okay and then secretly texted my friend/fair-mentor Melissa that I didn’t think we could bring Ruby after what we’d done to her. I was ready to scratch, but Melissa convinced me otherwise. “Bring her.”

We made it to the fair grounds without any hubcaps clattering off or goats falling out of our Honda CR-V, passed the vet check (PHEW!), and got the goats and the bunny settled in. As we were leaving the fairgrounds, our friend’s seven-year-old son Dewey mentioned to us that kids have to wear all-white outfits in the Dairy Goat show.  What? They do? Holy crap! (Thank you, Dewey!)

We ran to the car and raced to Walmart (Sorry: only clothing store within 45 minutes), and bought khaki and white outfits for the kids. Raced back for the mandatory meeting. Okay, we were making every cut so far. Let the fair begin!

We arrived early on the first day of the fair so we could milk Ruby and feed the goats. Already the feeling in the goat tent was convivial and sweet. Kids were putting their goats up on milking stands to milk them or do last minute shaving touch ups. Children as young as 6 or 7 were hauling wheelbarrows around, tossing manure with pitchforks, and taking their goats or cows on practice runs to the show tent. Every kid or parent we asked a question of would drop what they were doing and offer us last-minute tutorials, or the use of their hoof scrub brush, or advice on how to walk around the ring or present the bunny to the judge.

When I thanked people for helping my children, they shrugged sweetly and said, “Everyone helped us when it was our first year. That’s what the fair’s all about.” Every time someone said something like this, I would feel tears spring to my eyes. Thank you, all you amazing people for taking such good care of us. 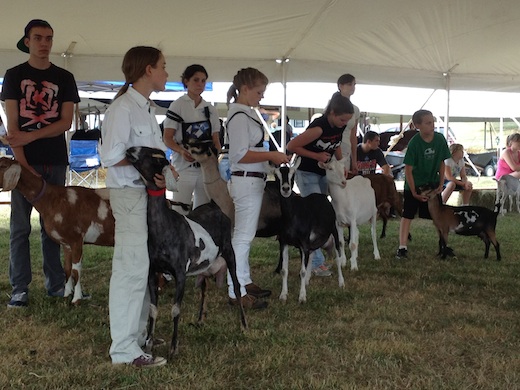 We weren’t expecting to place in any class. 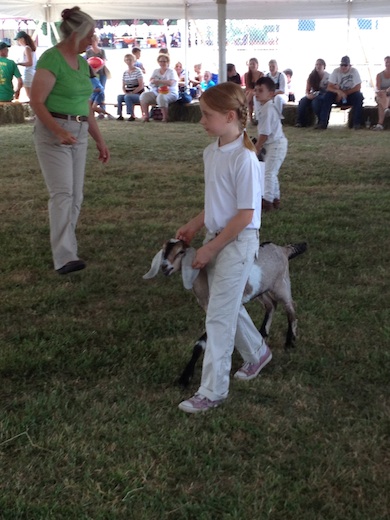 As I said to my kids, “We get a blue ribbon just for making it to the fair this year. Next year we’ll be real competitors.”   So what a happy surprise this was: 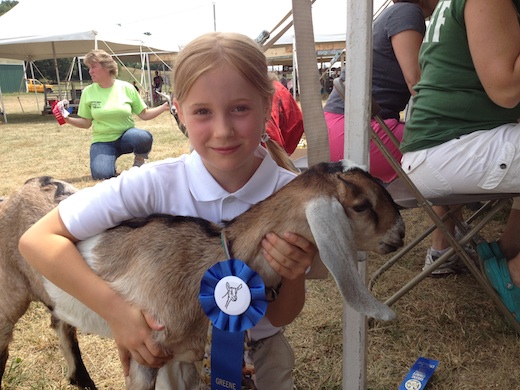 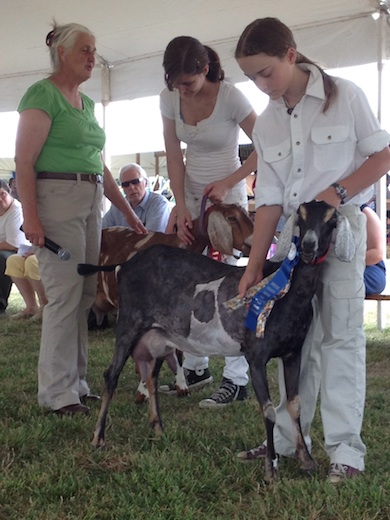 By the end of the fair my kids had amassed an impressive collection of ribbons and trophies: 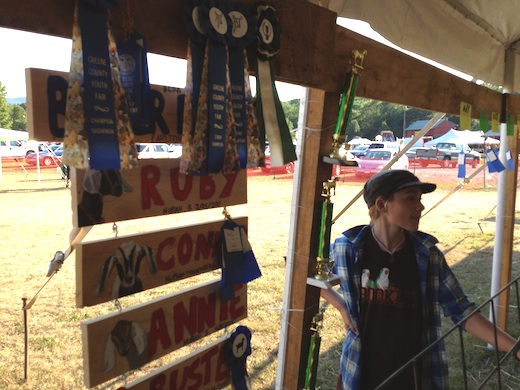 Little Annabel didn’t care about her victory. She just wanted to nibble on her trophy… 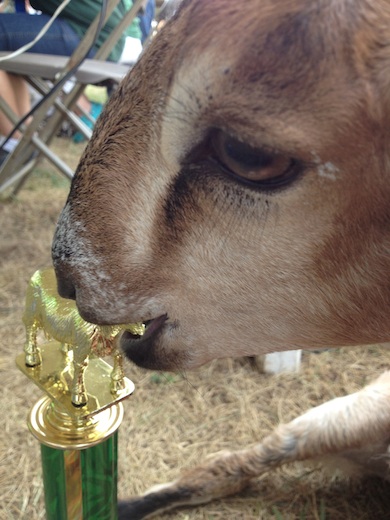 … and go hang with her brother Buster. 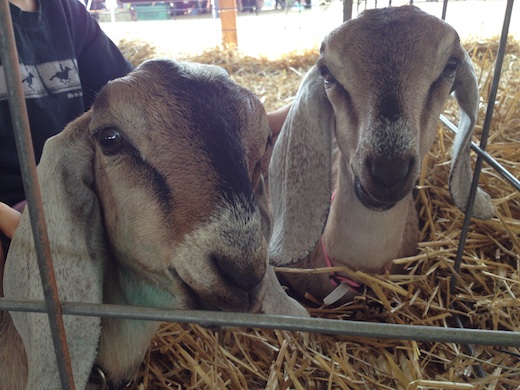 The days were passing in a blur of rabbit classes… 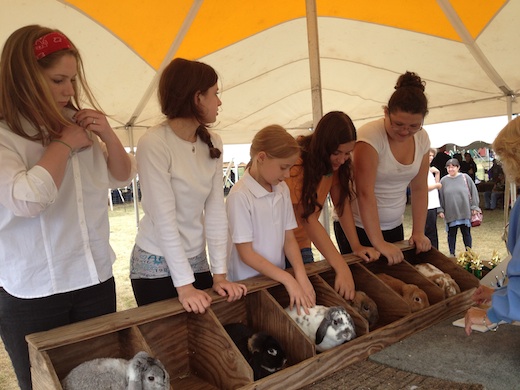 and chicken classes and trips to the midway and serious, intense hanging out in the animal tents. 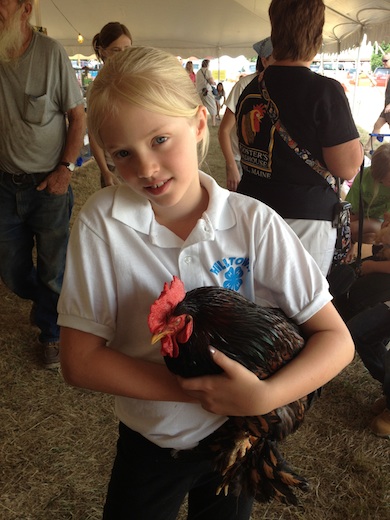 Megan was palling around with old and new friends in the bunny tent, and Ernie was lounging in front of his trophies, talking goats with goat people, and explaining goat farming to the fair’s visitors. 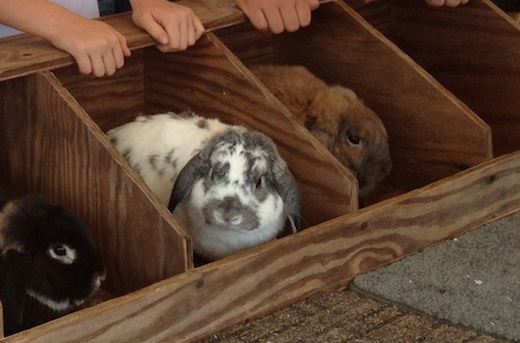 Friday night was the the Pack Goat competition. Goats get outfitted in packs and have to go through an obstacle course, and are then judged on their suitability for packing. I was expecting an easy-going show, but this was the night that we witnessed the most succinct expression of the fair’s power to test and reward these kids.

One of our friends, a mature, capable, lovely 9-year old, who had mentored us for weeks in our goat show preparations, was in the intermediate pack goat class. We’ll call her Julia. As it happened, Julia was the only competitor in her class. And she had a giant, normally sweet-tempered goat named Comet, who didn’t happen to feel like moving that night.

Goats are funny. Sometimes they will do what you want and sometimes they won’t, and there’s not much you can do about it. Comet was not moving. He probably weighed 200 pounds more than she did. I was distracted, still trying to pin down our plans for getting our pony to the fair the next morning, and I looked up from a phone call and saw Julia outside of the ring, hugging her mom tightly, and crying.

Then I looked again and Julia was back in. With the same huge goat. Who still didn’t want to move. This time she got him around the ring, and they were stuck at the water trough. Goats hate going through water, and it is usually really funny to watch kids trying to get their goats through a little 2-inch-high trough of water.

This wasn’t funny; it was impressive and intense and even beautiful in a terrible way. Julia had tears running down her face, was choking back sobs and trying, harder than I have ever seen a kid try to do anything, to pull her goat through the water. It was an impossible task, and she was pulling him with the kind of effort that adults summon in the last stretch of a marathon. Everyone was watching, she was the only one in the ring, she was crying, and everybody there so badly wanted her to make it. People all around the ring, including the judge, were calling advice and props. Julia tried so hard, but that giant goat wasn’t touching that water, and some things are beyond a nine-year old’s physical abilities, even a nine-year old like Julia.

The next time I saw her, after the class had ended, she was in her mom’s arms again, miserable, and totally unaware of how amazing she was. When was the last time you tried that hard? I’m not sure I ever have. Out of everything I saw in those four days of fair, the sight of that 9-year old girl going back into the ring to throw her whole self against impossible odds in front of a crowd in an event that meant so much to her was the most amazing thing I saw. Julia, you are awesome.

But we couldn’t dwell on the Pack Goat Show, because it was about to be Saturday morning: the day of the Horse Show! Our riding teacher Mia got to our house at 7 am Saturday morning and started braiding Bugsy’s giant puffy mane, quite a task. 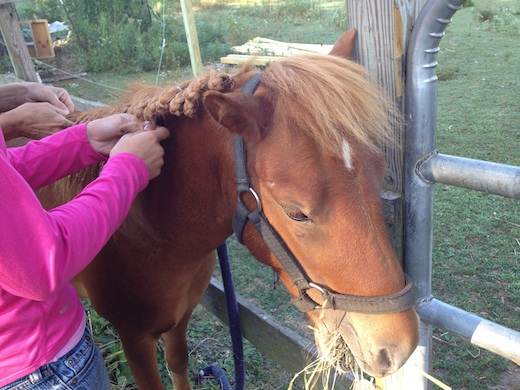 This was going to be Bugsy’s and Megan’s first real show, and there were no novice classes. Megan competed against kids much older than she was, and did a great job. We were all so proud of her and Bugsy both, out there in the field with the big kids and their MUCH bigger horses. Look how tiny Bugsy is! 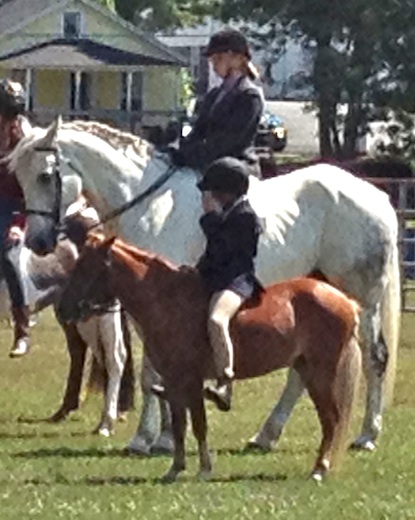 Once the horse show was over, we were home free. No more competitions.

You would think my kids would be tired of the fair. How many $5 lemonades can they drink? How many times can they go through the Ag Tent? How much more could they possibly want to stay there?   Much more, as it turned out. “Why is the fair only four days?” and “Why do we have to leave?” and “We should camp out here next year,” were what I heard over and over. 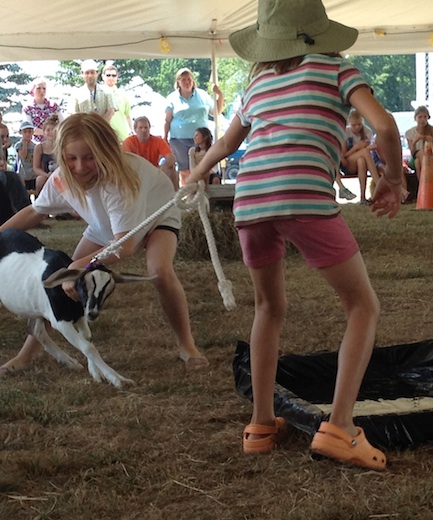 Our only event on Sunday was the Goat Obstacle Course. This is my favorite part of the fair. It’s open to any kid, and it’s just for fun. 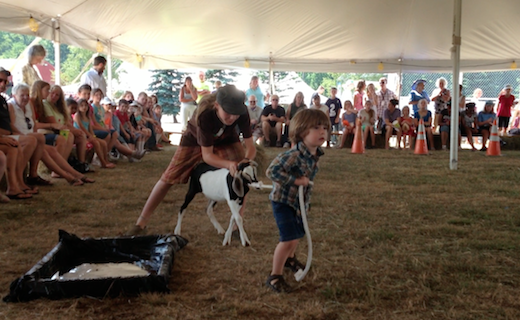 Kids take the goats through tires and around cones with hay in them, over a bridge and through the water trough. My kids both went through, and then started lending their goats to other kids, and helping other kids get through. 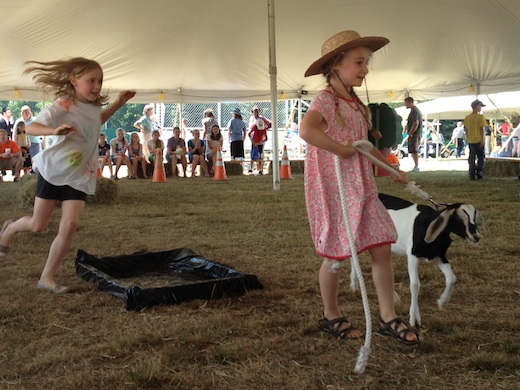 As a perfect cap to the fair, that big stubborn goat who made our friend Julia so unhappy got his turn in the course. Julia’s father, mother, and brother took Comet through. It took all three of them to get him over and around, but they did it. They settled the score. It was a perfect end to the last four days.

At 5 pm the fair ended.  In a crazy-fast blur, animals and supplies were packed up, pens were taken down, bedding was forked into piles — all by parents and kids. As in every other aspect of the fair, the strength and work ethic of these farm kids floored me. We finished clean-up at 8 that night and headed home with a car full of ribbons and trophies and tools and chairs and folded scraps of paper with phone numbers of new friends, and tired, satisfied bodies and souls.

Thank you, Greene County Youth Fair, and everyone involved. We’ll see you next year!