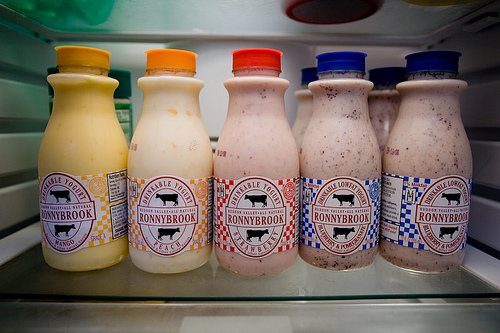 Did you catch this article in the NYT about “farm-to-terminal” eating at big airports? And if you did see it, did you recognize one of our favorite local milk/ice cream/yogurt/creamy-dreamy goodness purveyors featured in the photo? Yep, that’s Ronnybrook, and just because you’re at JFK airport doesn’t mean you can grab some delicious mango drinkable yogurt (which is basically mango lassi in a bottle, the best beverage ever) instead of resorting to a bag of Doritos or a chicken sandwich from McDonald’s. It’s not just JFK that’s providing locavore comestibles to hungry travelers. The article says that Newark Airport’s Terminal C is getting a revamping that will include items obtained from greenmarkets. We’re on board (see what we did there?) with the farm-to-terminal movement given that we’ve had enough Pizza Hut personal pan pizzas to go to last us two lifetimes. And while we probably won’t be partaking in lamb burgers on brioche buns with locally grown sweet potato fries on the side while awaiting our flight, we will be grabbing ourselves some of Ronnybrook’s mango yogurt for the long trip ahead.