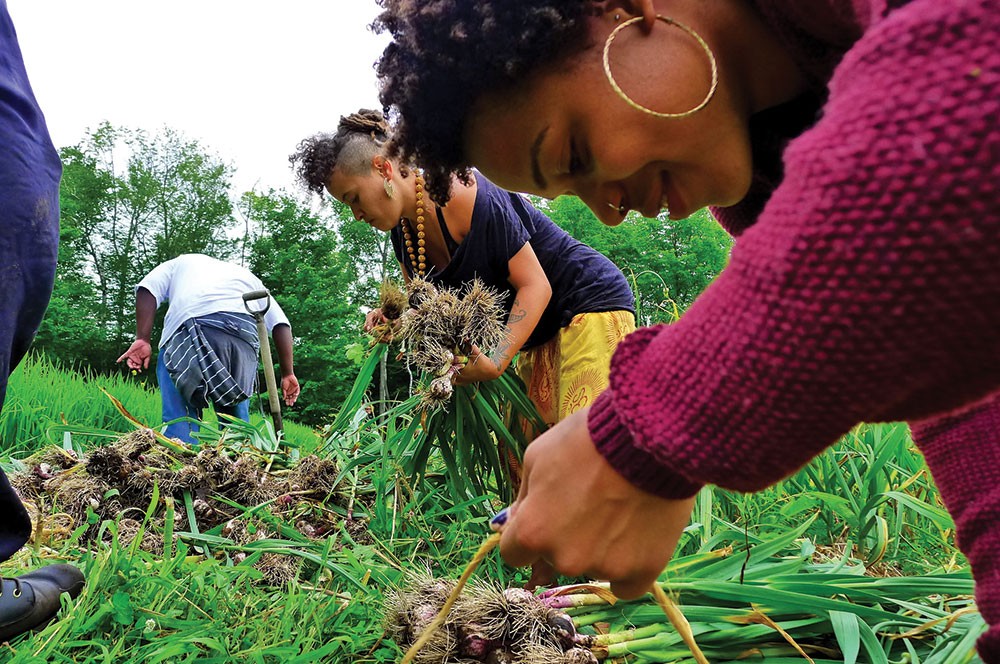 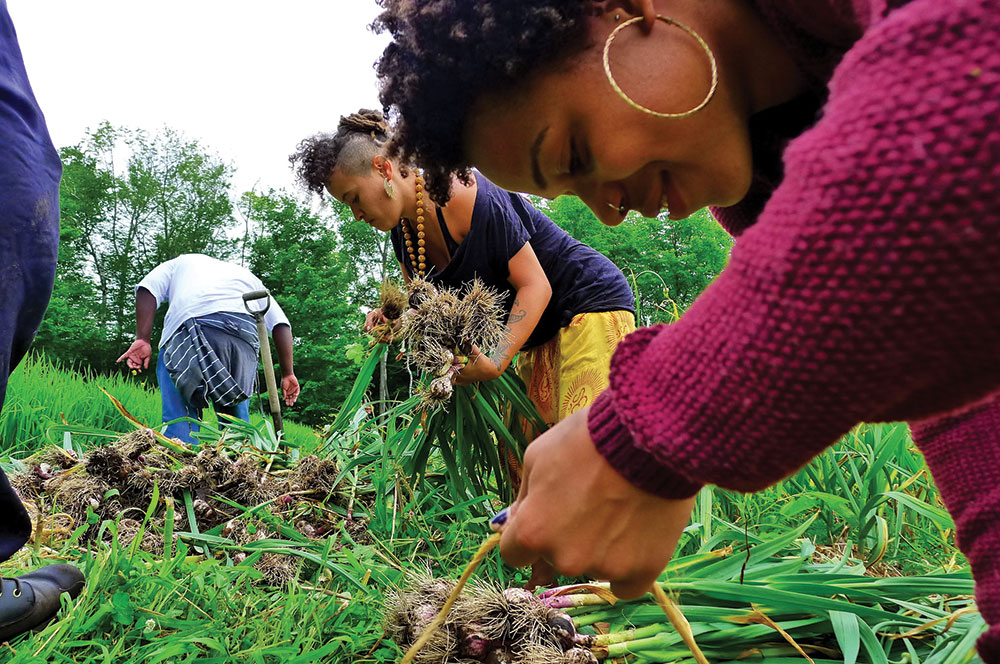 The Hudson Valley has long been a magnet for both the socially and the environmentally conscious. In recent years, the farm-to-table movement has focused consumers and producers alike on the environmental and health benefits of local fare. Now a growing number of businesspeople in the area—from farmers to cooks and bakers—are marrying their personal values with their professional lives and serving up social substance along with sustenance. 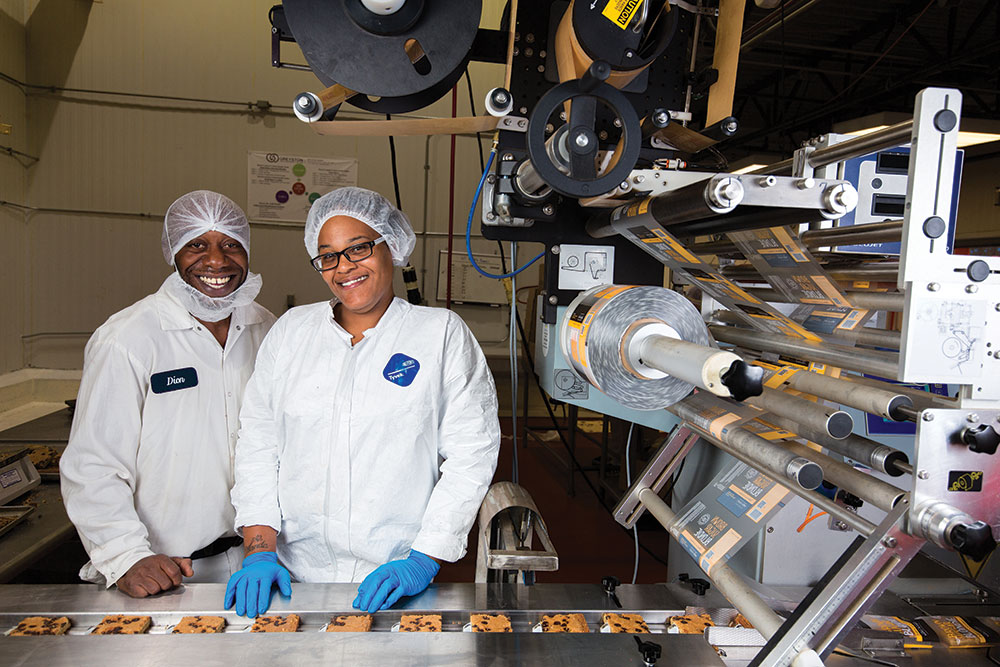 Internationally famous Buddhist teacher Bernie Glassman—a Brooklyn native—founded Greyston Bakery in Yonkers in 1982 with a mission to fuel personal transformation among the disenfranchised and help bring about community economic renewal in struggling Yonkers. Today, the thriving bakery offers an array of community benefits along with its high-quality baked goods—$15 million worth of which were sold last year alone. “I think our product is absolutely amazing, but our major partnerships have come about through mission work,” says Ariel Hauptman, Greyston’s director of business development. Each year, under its open-hiring program, Greyston enrolls about 100 apprentices with criminal records and other barriers to employment and teaches them to make its signature cookies, brownies, and blondies. About a third of the apprentices graduate to full-time jobs at the bakery, whose main gig is supplying the brownies for several flavors of Ben & Jerry’s ice cream. Greyston also helps its staff find affordable housing, child care, and opportunities for advancement. One of its success stories is Dion Drew, an ex-convict who has risen from apprentice to assistant supervisor in his seven years at Greyston. “It’s just a blessing,” Drew says. “They gave me the opportunity to grow.”
104 Alexander Street, Yonkers / (914) 375-1510 / Greyston.com 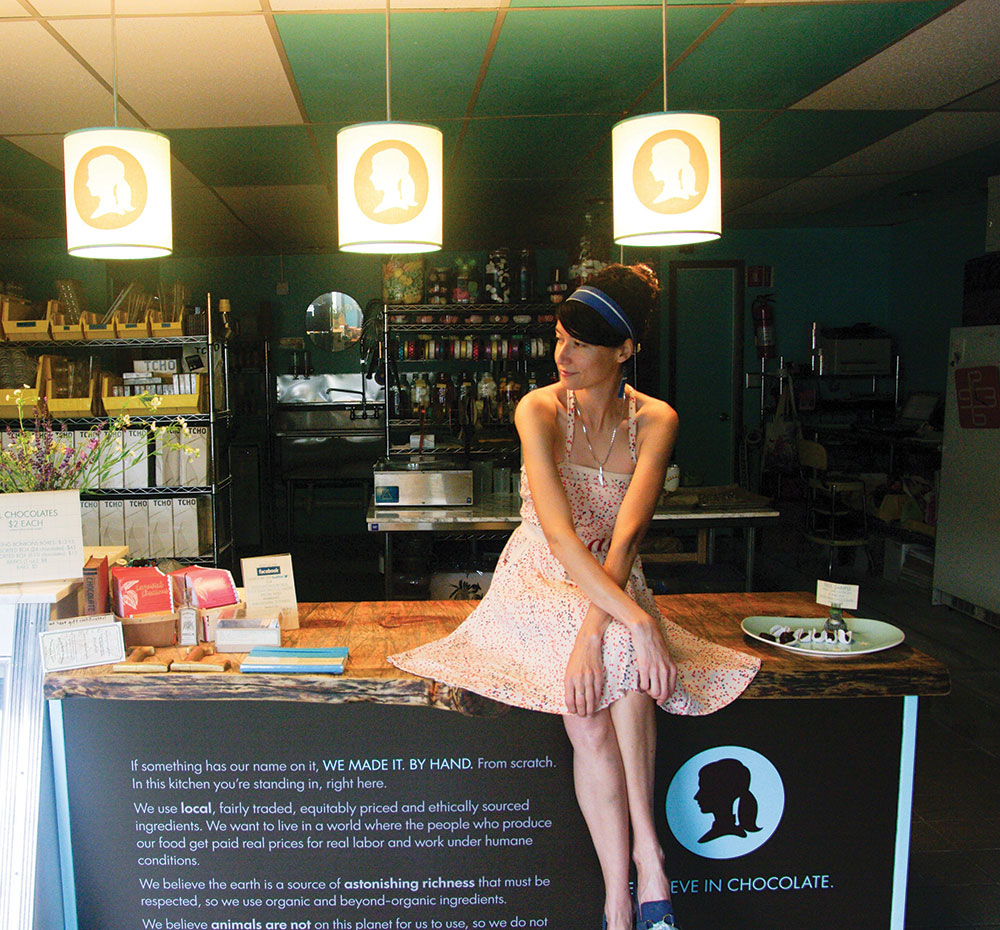 Lagusta Yearwood’s artisanal chocolates are vegan, but if you didn’t know, you probably wouldn’t guess. “I wanted to do something in line with my values,” says Yearwood, an animal-rights activist. “But we have a lot of customers who aren’t vegan. We use coconut milk and coconut oil, which are nice and fatty and rich. It’s not like we’re using weird tofu.” She pairs unusual ingredients such as yuzu, shitake,

fennel, and peppercorn with dark chocolate—all organic and ethically sourced—creating sweet, sour, earthy, and spicy flavor combinations. The intricately fashioned confectionary presented at Lagusta’s Luscious, Yearwood’s five-year-old shop in New Paltz, also has a distinctly feminist twist. Several offerings are named after groundbreaking female pioneers, including physicist Vandana Shiva. The Furious Vulva is a womanly shaped oval of dark chocolate, pink peppercorn, and pink sea salt. And Lagusta’s activist bonbons and truffles are making their way far beyond what she calls her “world headquarters” in New Paltz. Find them in the Hudson Valley at Outdated Café in Kingston, Echo Boutique in Beacon, Taste at Todd Hill in Poughkeepsie, Tuthilltown Spirits in Gardiner, and Verdigris in Hudson; in Manhattan at Handsome Dan’s and Local Roots NYC at Fulton Stalls Market; in Brooklyn at Riverdel Cheese and Sparrow; or in nine other states and Washington, D.C. 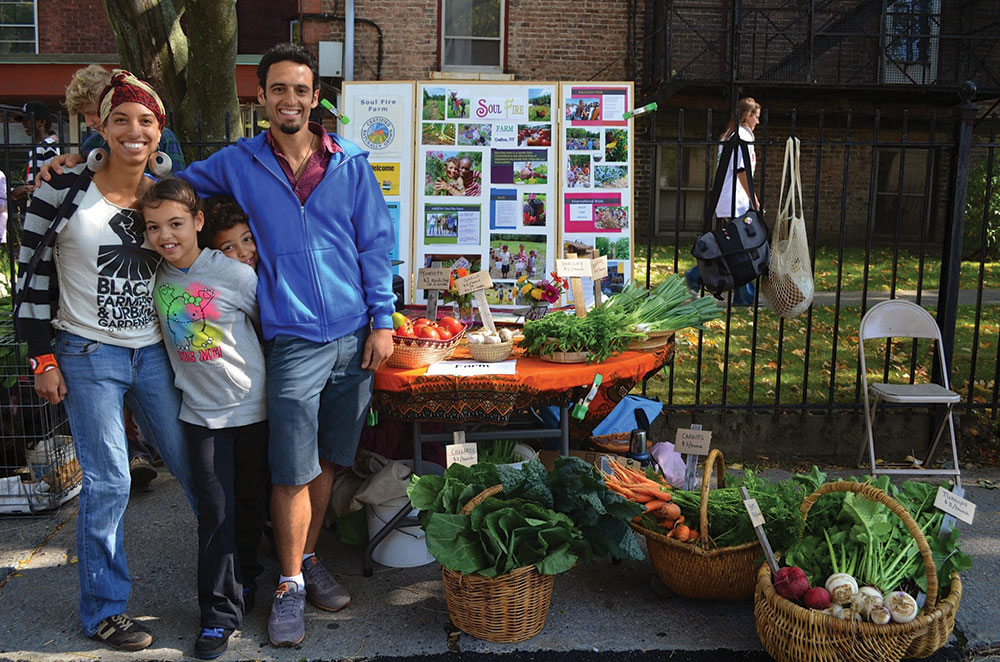 Soul Fire Farm is a sustainable, Certified Naturally Grown farm in Grafton that addresses disparities in land ownership and access to produce by offering a training program for aspiring black, indigenous, and Latino farmers, activist retreats, youth agriculture classes, and an inner-city CSA (community-supported agriculture), which charges on a sliding scale and accepts SNAP benefits. In 2011, husband and wife and co-owners Jonah Vitale-Wolff and Leah Penniman launched Soul Fire on the 72-acre farm where they live with their two young children, growing vegetables, raising poultry, tending fruit orchards, teaching sustainable building methods, and focusing on ending racism and injustice in the food system through the many programs they offer. Penniman, who is African-American, and Vitale-Wolff, who is Italian and Jewish, met at Clark University, and bonded over their shared love of farming and desire to use it as a tool for social good. “Both of us feel our souls really come alive when we get to do this work,” Vitale-Wolff says.
1972 Highway 2, Grafton / (518) 229-1339) / SoulFireFarm.com 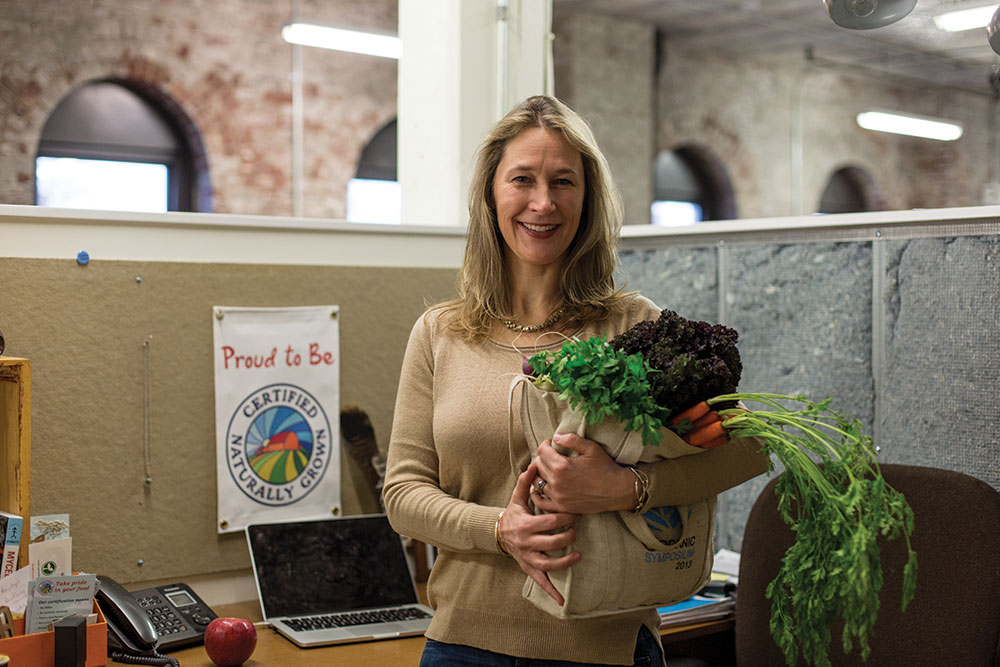 There are 740 American and Canadian farms (including Soul Fire Farm) whose produce is Certified Naturally Grown (CNG), a less expensive and less time-consuming alternative to the US Department of Agriculture’s organic certification. Several Hudson Valley farmers who were committed to organic practices but felt that the national program wasn’t a good fit founded CNG in 2002. They hired environmental activist Alice Varon to run the nonprofit organization after learning about her lobbying efforts to label genetically engineered seeds. CNG’s modest yearly dues range from $110 to $200, and its certification process includes an inspection by a local farmer, which makes it a true peer-to-peer system. “I wanted to invest my energy in an organization that would support the people working most closely with the land,” says Varon, who splits her time between Stone Ridge and Brooklyn, where CNG’s office is located.
540 President Street, 3rd Floor, Brooklyn / (845) 687-2058 / CNGFarming.org 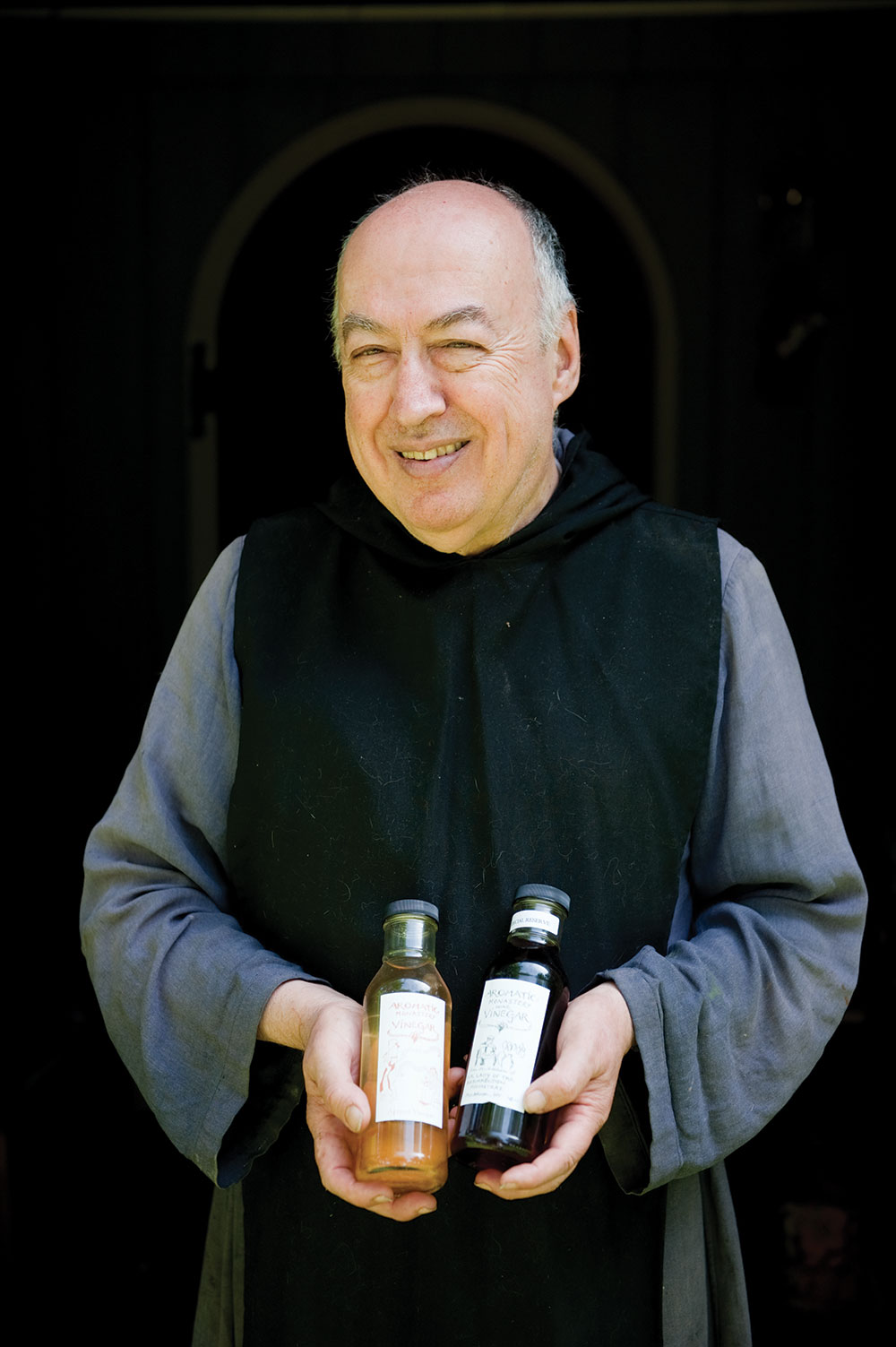 Photo by Jennifer May

OUR LADY OF THE RESURRECTION MONASTERY VINEGAR

For Brother Victor-Antoine d’Avila-Latourrette, crafting vinegar by hand is perfectly in tune with the monastic values of simplicity and hard work. The Benedictine monk, a 40-year resident of Our Lady of the Resurrection Monastery in Lagrangeville, grew up in the French Pyrenees, where he learned to make vinegar using the painstaking medieval method of the local monasteries. With herbs from the monastery’s garden and other local ingredients, he creates distinctive flavors like apricot, sherry, and honey cider that are tasty enough to sip straight from the bottles sold in the monastery’s small shop (prices range from $4 to $20 per bottle). The key, he says, is the fermentation process of up to 12 months for his standard vinegars and 20 months for the Special Reserve versions. “It’s like good wine—it gets better with time,” says d’Avila-Latourrette, who is also an accomplished chef and the author of a dozen cookbooks. You can taste for yourself at the monastery’s Vinegar Festival, held every July.
246 Barmore Road, Lagrangeville / (845) 677-93610 / OurLadyoftheResurrectionMonastery.webs.com

Karen Angel is a freelance writer based in New Paltz.