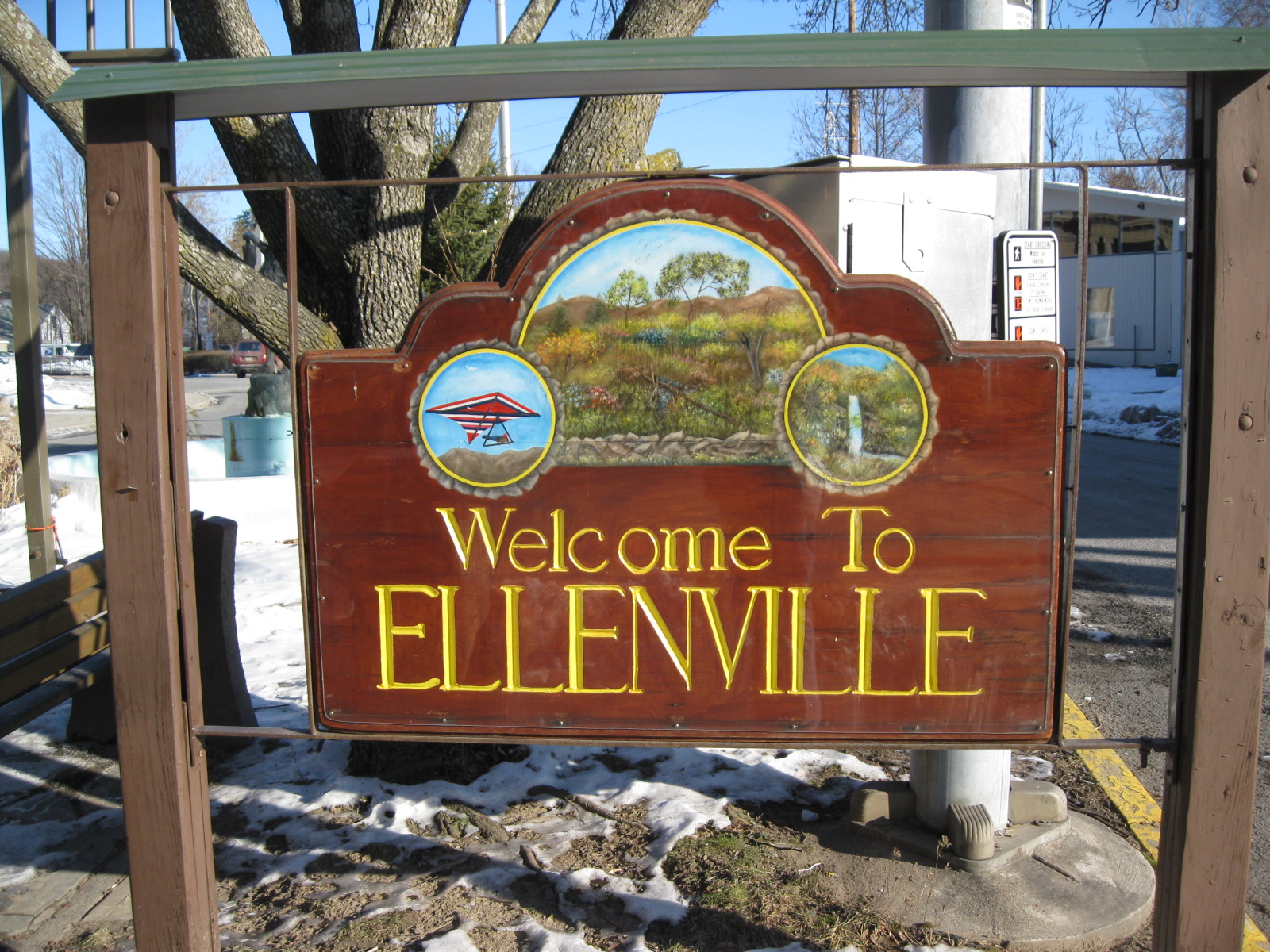 At the base of the scenic Shawangunk Ridge, and about 90 miles from New York City, Ellenville was a happening hotspot in the 1960s. Borscht-Belt hotels like the Nevele poured tourists into the bustling downtown shops. Industries like Channel Master and Imperial Schrade provided steady jobs for hundreds of residents. But as low airfare made upstate vacations less enticing, and factories moved their business out of the area, the village’s heyday became a faded memory.

Now, a new generation of residents and businesses are infusing the village with fresh life.

“There are dozens of people who have made the decision to move here and invest here,” says Elliott Auerbach, deputy comptroller for New York State and an Ellenville native. “People are loving the vibe, affirming what I’ve known all along: that this is a special place. You’ve got the mountain view down Canal Street, and buildings are being purchased with plans in mind.”

Among those buildings is Market Street Studio, bought last year by sculptor Paul Villinski and his partner, artist Amy Park. Villinski has been familiar with Ellenville since hang-gliding off the Shawangunk Ridge in the mid-1990s. He and Park are also raising their son in their home in Ellenville—a big leap from their former live-work artist loft in Queens. 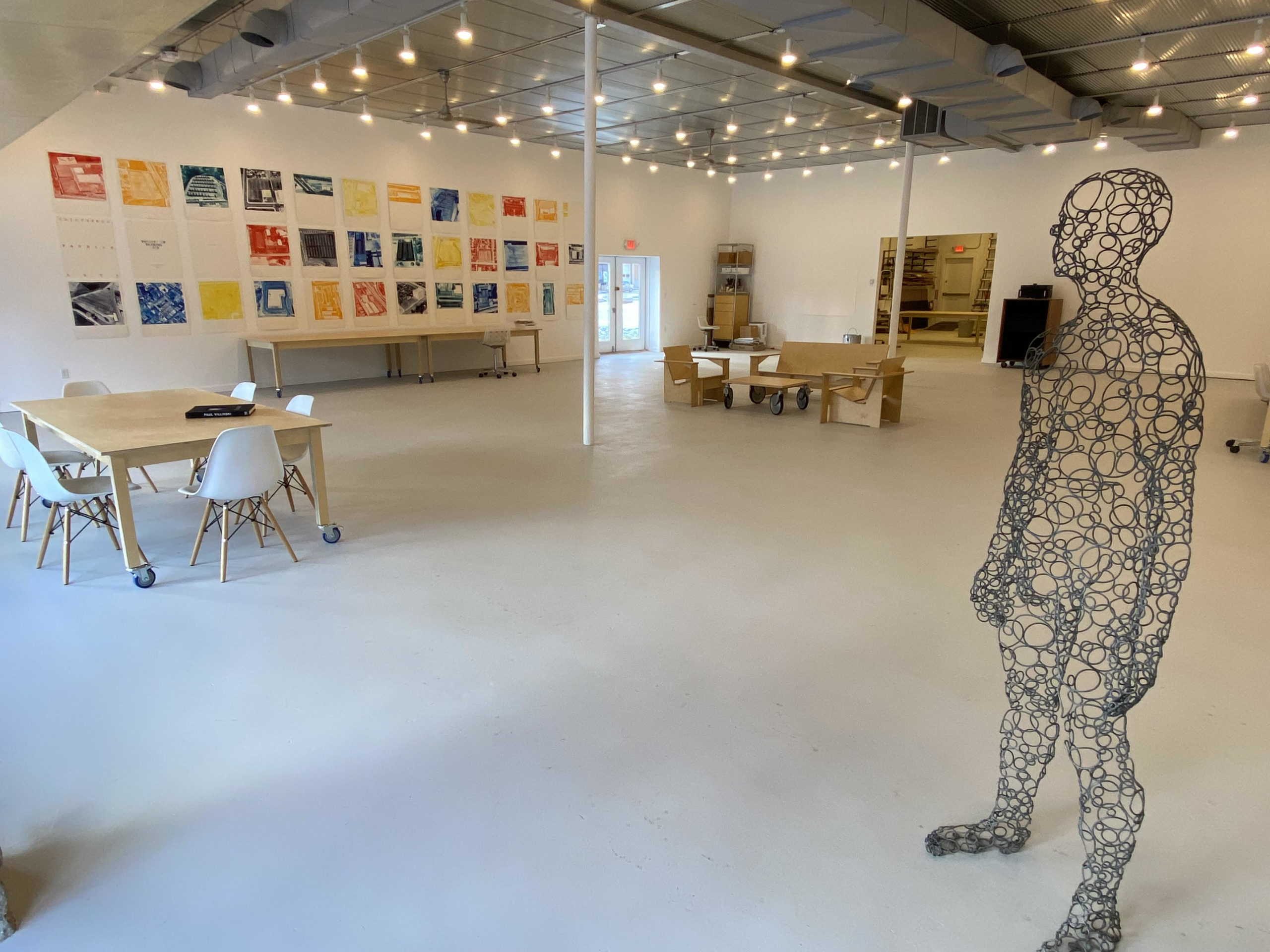 “We have a 4,000-square-foot studio filled with light that we really love,” he says. “We hear great stories about the 1960s, how people would just stroll the downtown. We’d like to get back to that—we want this place to be a locus for arts and community.” To that end, Villinski plans to liaise with local schools for workshops and mentoring, as well as host monthly artist meet-and-greets.

Artist Robert Pollak grew up in Ellenville in the 1960s and recalls those downtown shops, and industries like Channel Master and Imperial Schrade, and of course the Nevele resort, fueling the village’s economy. Now, a new industry is coming to town. Cannabis company Valley Agriceuticals LLC and its parent company Cresco Labs plan to operate at the 91-acre Schrade site that straddles the village’s boundary with the Town of Wawarsing. The operation includes a 380,000-square-foot plant that would employ 300-400 at the start, with room to expand to 680 jobs. Somerset Partners plans a hotel/residential development at the Nevele. “There’s a new kind of growth here: not a Channel Master or a bungalow growth, but a kind of rebirth,” Pollak says.

Sparking that is the Coalition of Forward Facing Ellenville (COFFE), comprising new transplants and longtime residents. Other programs include Market on Market, a popular monthly farmers/artisan market. Tori Messner and Natalia Moena opened Reservoir Studio in August 2020 and later had a hand in forming both COFFE and Market on Market. The duo created Morning Sunshine, a seasonal coffee shop pop-up at their studio that soon became a community hub. They hope to continue that sense of community at Dolly’s Provisions, the coffee/provisions/brunch spot they’re planning a few blocks away. “Everyone has been helpful—from the building department to the mayor, throughout the municipality and the school,” says Messner.

If you need a coffee fix now, don’t miss Twin Ravens Coffee Co. on Canal Street for ethically sourced coffee as well as great breakfast sandwiches. It’s next to Tony and Nick’s Italian Kitchen, a prime place for classic Italian specialties. Ease your carb cravings at Cohen’s Bakery, a staple for decades that recently got bought by the proprietors of Gaby’s Cafe, the place to go for great Mexican food. 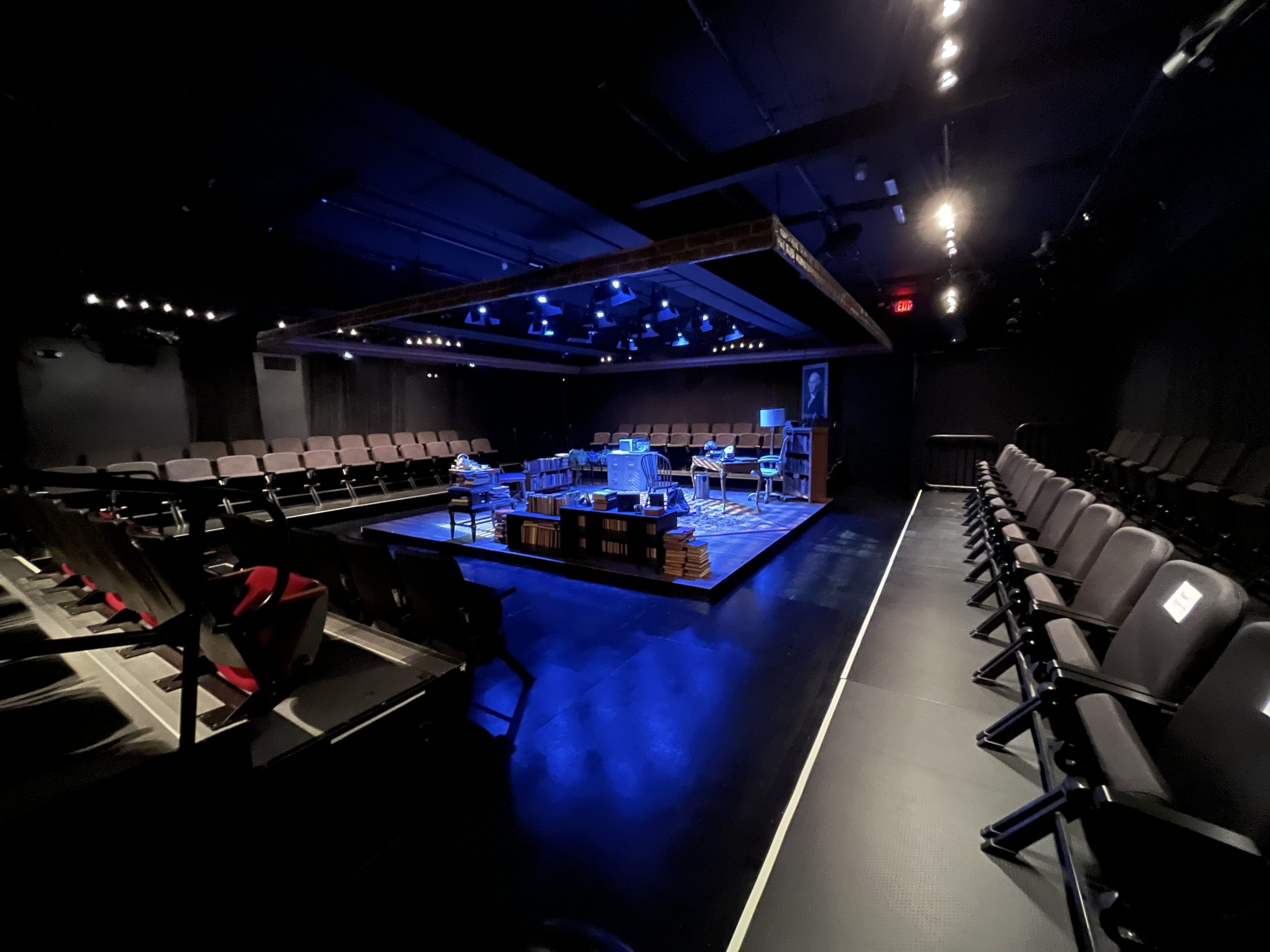 Just down the block from Gaby’s, you’ll find the main theater of Shadowland Stages, Ulster County’s only nonprofit professional Actors’ Equity theater. Next door to that is the new Shaken Express, a smoothie shop that plays to the heart of the outdoor, healthy vibe. Clean eating is not new to Ellenville, though: Aroma Thyme Bistro has been offering organic, farm-to-table dining since 2003. Owner Marcus Guiliano says he’s intrigued by the current reinvestment in the village. “Hopefully, everybody will work hand in hand,” Guiliano says. “As a community we need to continue celebrating what we have here, which is an outdoor playground that’s bar none.”

Try hang-gliding at Mountain Wings, 14 miles of mountain-biking single-track at Lippman Park, golfing at the Shawangunk Country Club, and of course hiking just up the ridge at Sam’s Point. If you’re looking for an amble, the tail end of the 27-mile O&W Rail Trail begins right in Ellenville at Berme Road Park. Those activities attract visitors, much to the delight of merchants like Barbara Hoff.

Hoff has created wholesale jewelry for 42 years out of the old Ellenville train depot, and six years ago opened Top Shelf, a funky vintage shop on Canal Street. “It’s so gratifying to see the new energy here; it’s kind of come and gone previously,” she says. “People have wholeheartedly invested in the village. They are savvy, media-wise and social-media-wise.” 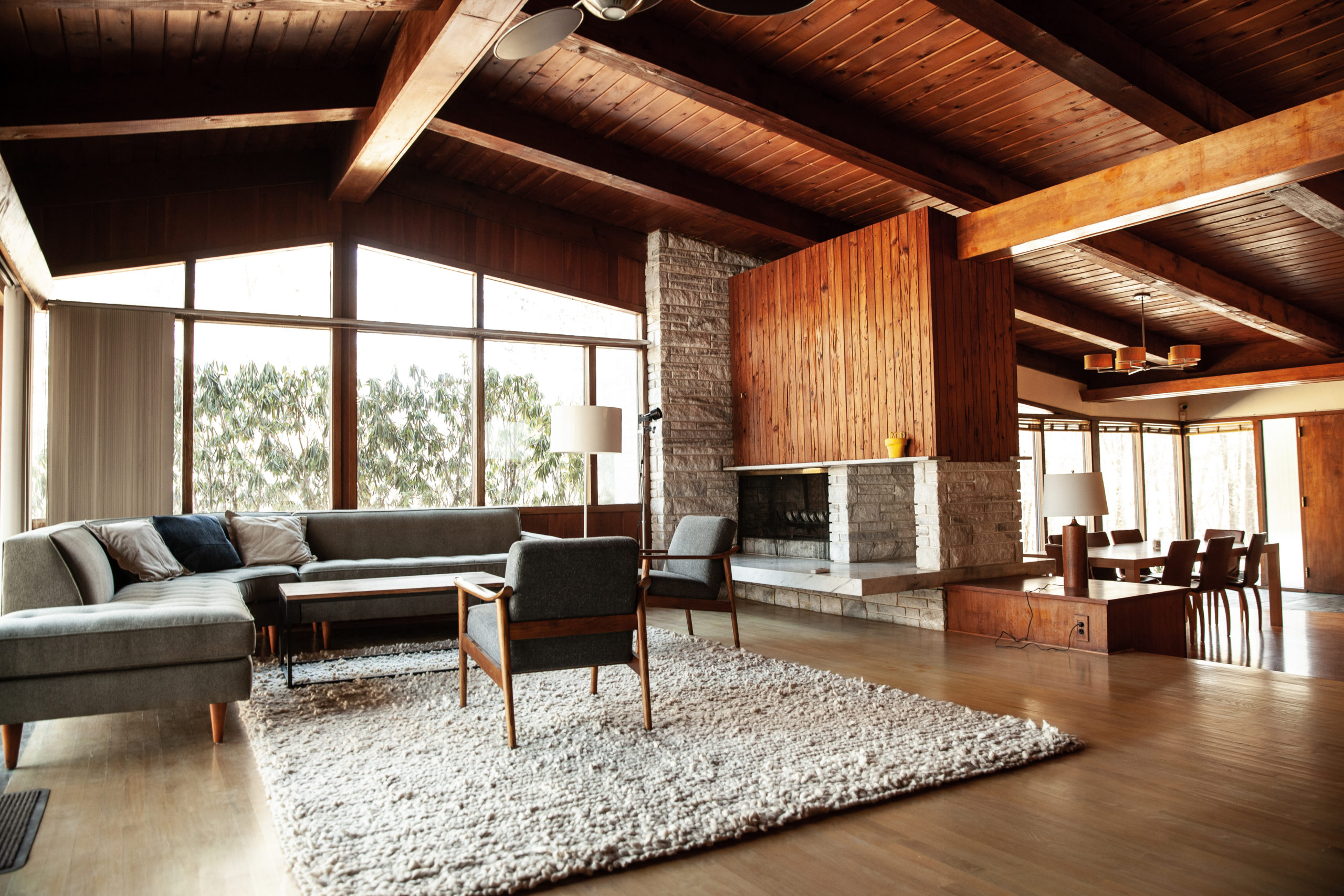 The Upstate Mod House is a Mid-Mod jewel. Photo/Nick Gordon

That savviness is appreciated by Nick Gordon, who opened “Love, Velma,” a live-jazz monthly speakeasy in the basement of the Mod House, a dreamy, Mid-Mod 1959 time-capsule of a home on the outskirts of Ellenville that Gordon lives in and rents out to guests. He has found people who share both his vision and the responsibility to capably carry it out. “There are a lot of motivated people here who are skilled,” he says. “Everyone is professional and knows how to move this momentum forward in Ellenville.”

Richard Travers and his wife, Cheryl, were early adopters of the current revitalization vision. President of the Rondout Valley Business Association for 11 years, Travers believed Ellenville was primed for a rebirth. “I felt the vibes in Ellenville were quite good,” he says. In 2016, the Traverses bought the old village hall/jail/police station at 81 North Main Street, and—after a stint as a high-end antique shop—the property is now the 81 North inn. “I believe Ellenville is more poised for economic revival than people thought,” Richard Travers says. “And I’m thrilled with the efforts other people are making.” 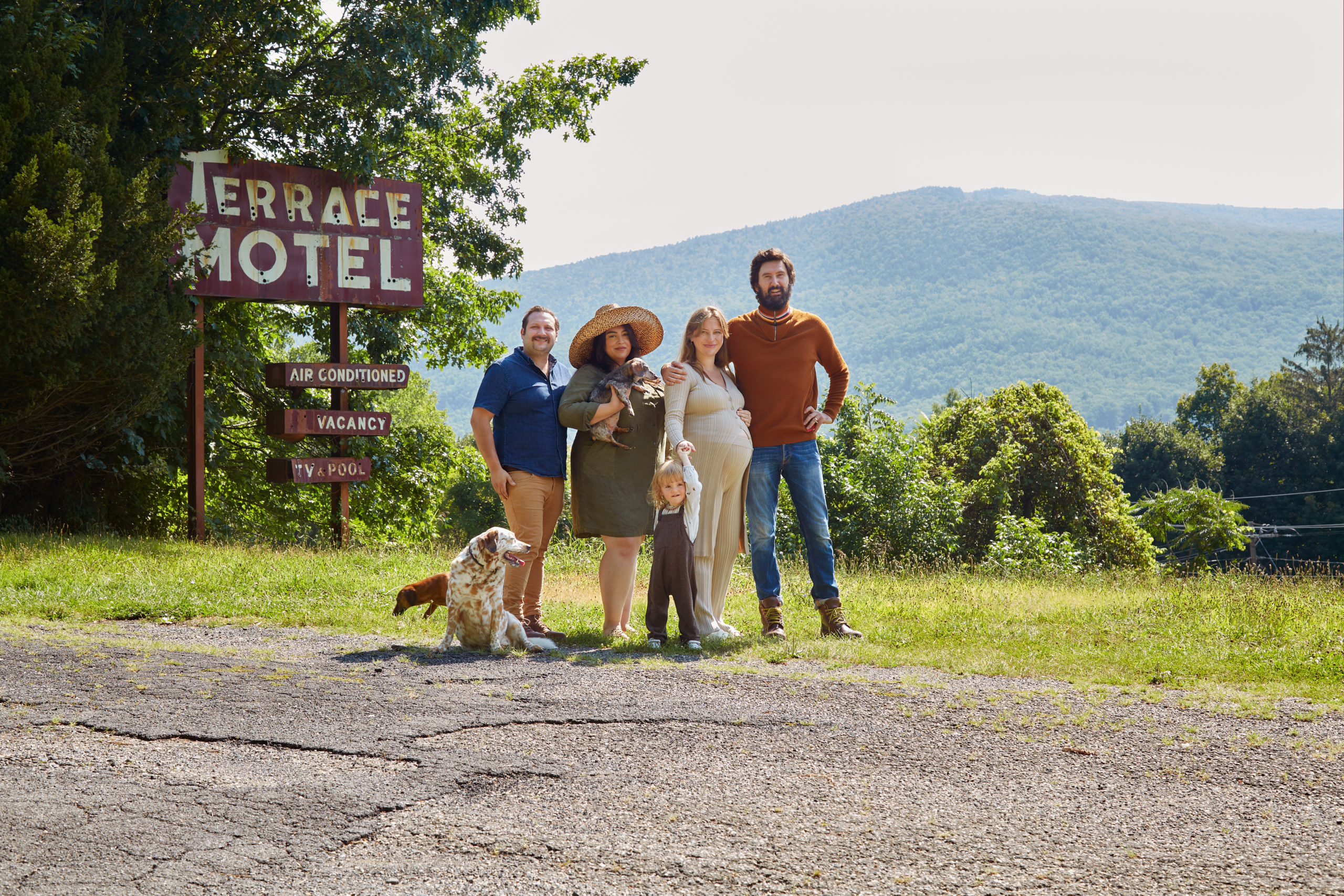 (L to R) Mitch and Jemma Allen and Victoria and Anthony Nelson plan to open a revamped Terrace Motel this summer. Photo/Natalia Moena

Another property is preparing to offer new accommodations, too. At the village’s southwest end on Route 209 is a decaying sign for the Terrace Motel. Behind the sign is an equally decaying property, but two couples are bringing it back to life. This summer, Victoria and Anthony Nelson and Mitch and Jemma Allen will open a revamped, 22-room Terrace Motel that maintains the Mid-Century Modern aesthetic. It’s a lot of work, but Victoria Nelson has faith in it. “We would not be doing this if we didn’t see a future in Ellenville,” she says. “We didn’t want to be an ‘island business,’ where people come from elsewhere, only stay onsite, and then leave. There’s an eagerness here that made us want to do this.” 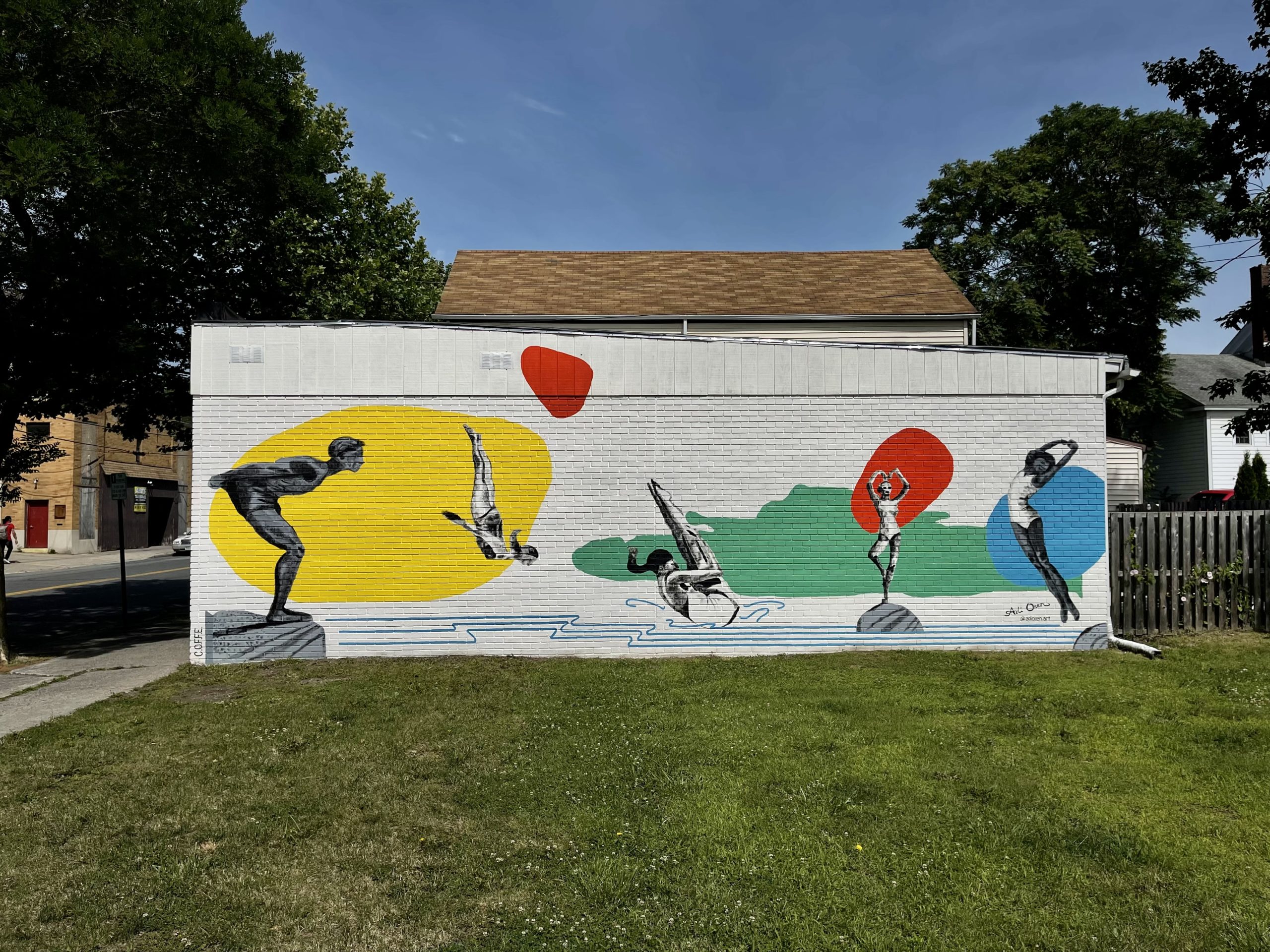 Adi Oren is a COFFE member and a part of Reservoir Studio, and is among those eager masses. An artist, Oren recently painted a mural commissioned by the new owner of longtime Asian cuisine staple Sook House. She also helped COFFE with a live-painting fundraiser in October. “Parents and teachers were excited that students can become part of the community,” she says, “helping to create a space here that is safe and vibrant.”