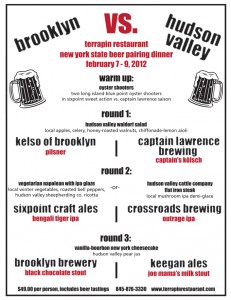 Brooklynites love to champion the borough’s culinary delights, from Soccer Tacos to Smorgasburg to its five Michelin-starred restaurants.

Truth is, though, many of the prized locavore ingredients in these lauded meals come from upstate New York, and the Catskills and the Hudson Valley have their own beloved restaurants, whose owners and chefs are willing to go toe-to-toe with Brooklyn’s foodies. Thus we have Brooklyn vs. the Hudson Valley, a three-night affair at the delicious Terrapin restaurant in Rhinebeck.

This is really a battle of ales and stouts, those from Brooklyn (like Sixpoint) versus those from upstate, (like Crossroads Brewing). But the beers aren’t just for drinking. They’re for glazing steaks and such, too. $49 per person, including beer tastings, from February 7 to 9.