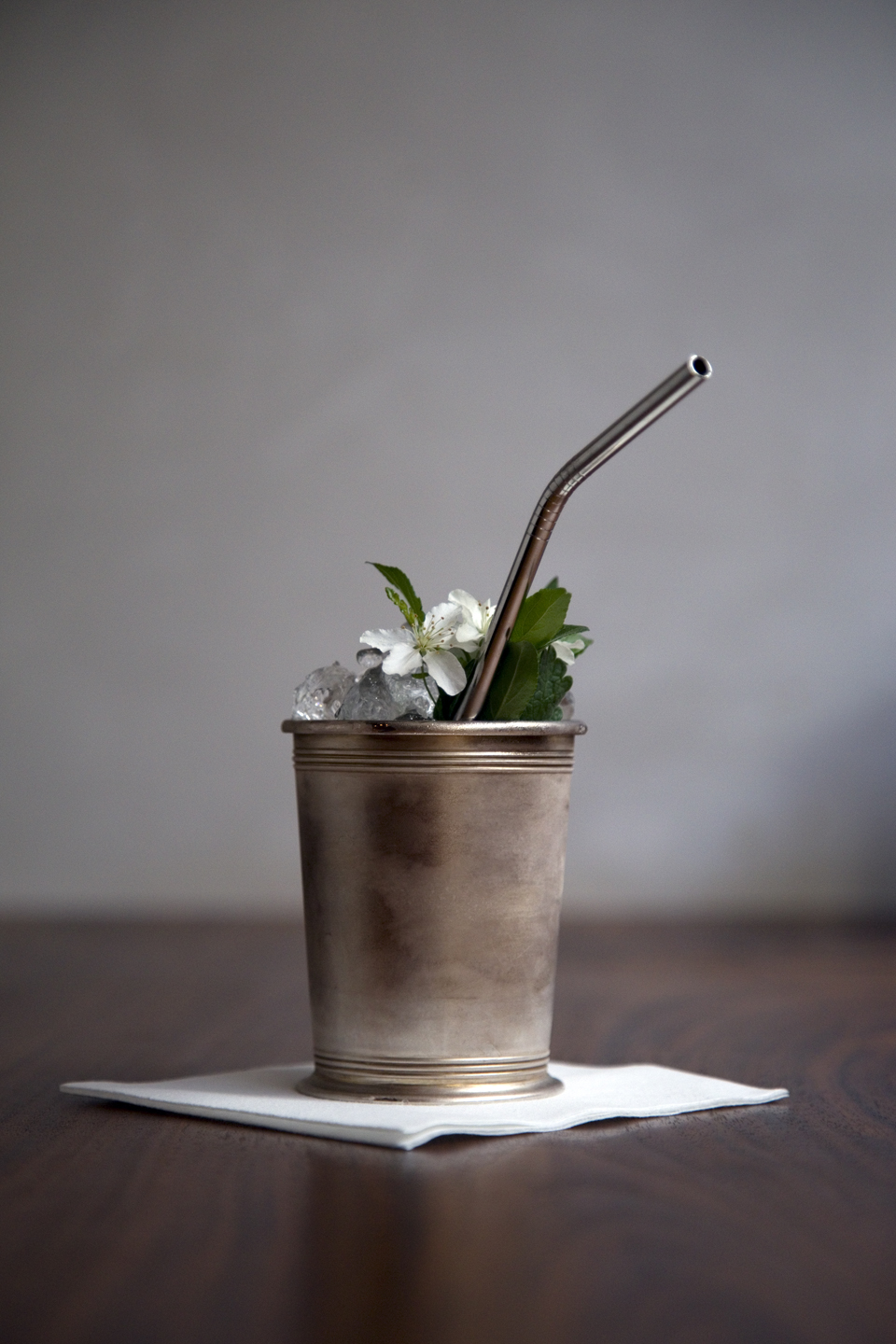 Fish & Game’s julep tradition is older than the restaurant, dating back to the frantic days before it opened four years ago. Jori, growing up in Austin, loved Derby Day festivities, even if she didn’t particularly care about the race itself. The occasion provided an excuse to wear fancy hats, to pop into different houses, and to drink juleps. Her joyous association of the event with hats, socializing, and cold, minty booze stuck with her over the years.

So, in early May of 2013, with the grand opening still a couple of weeks away, Jori pushed to open the bar for the Derby. She had found some proper silver julep cups, and the weather cooperated with a burst of warmth that pushed up the wild mint just in time. The race blared out over the speakers in the bar. Hats were worn. Merriment ensued.

Thus was a tradition born; Juleps appear on the bar menu every spring, coinciding naturally with Derby Day. Until last year, that is, when the wretched winter would not die. A few false starts only made the inevitable plunges back into teenage temperatures more painful. As a result, with the date of the race fast approaching, no mint had appeared in their fields. Jori tried to accept the idea of a julepless Derby, but the thought filled her with despair (a First World Problem if ever there was one). She even, heaven forfend, contemplated buying some mint. This is known in barroom parlance as “hitting bottom.”

Then, working in the garden, she noticed that the sage—one tough-ass herb—was regrowing briskly. Driving home, she had an epiphany: why does a julep have to be mint? Back home, hopefully checking on the mint’s progress, she noticed the cornucopia of other plants, wild and domestic, that were also early out of the gate and growing fast: wild strawberry, raspberry, and elderberry leaves, wood sorrel, ground ivy, clover, lemon balm, chrysanthemum, anise hyssop, tarragon, those first teasing wild mint buds… and every day the list grew longer as the plants grew taller. The result, besides quite literally saving the day, made an appealing riff on a classic. The flavor stays familiar—mint remains the dominant flavor, thanks to the dried tea—but with the extra complexity one expects from a Fish & Game house cocktail.

The herb syrup results from Jori’s thrifty use of stems from the various herbs, wild and domestic, that pass through the kitchen; the mixture varies depending on what’s available. Jori makes an herbal tea for the restaurant, so some of that dried mixture enhances the syrup with its more concentrated flavor; the round, spicy mints catch some bright highlights from the ginger leaf and an earthy, woody undertone from the thyme. Your fresh and dried herbs will likely vary, and that is as it should be.

Acid phosphate, a mixture of mineral salts and phosphoric acid with about the same pH as lemon juice, gave old-timey soda fountain drinks like cherry phosphates their name. Unlike lemon juice, which tastes rather a lot like lemons, acid phosphate adds sourness with no discernible taste. In addition, the salts heighten other flavors (as salts are inclined to do). In the case of this drink, it balances the sweet syrup and brings the nuances of the many herbs into sharp focus with no distortion. Besides adding an appealingly vintage vibe to a delicious beverage, it also serves as a reminder that much of today’s cocktail vocabulary (gin, vermouth, bitters, amari and digestivi, even Coca-Cola) evolved from medicinal tonics of the nineteenth century and before.

Drip the acid phosphate into a julep cup, then add the leaves and muddle them with the syrup. Add the bourbon, then fill the cup with crushed ice. Agitate the mixture with a bar spoon until the metal gets nice and frosty. Add more ice, mounding it on top, then garnish with a little bouquet of edible herbs and flowers. Serve with a straw.

Take fresh stems from a combination of wild mint, angelica, lovage, oregano, strawberry leaves, and clover, plus dried tea herbs: peppermint, spearmint, ginger leaf, and wild thyme and pour hot simple syrup over them. Let it steep until cool, then strain and bottle.