In mid February, a group of 100 artists, influencers and community leaders came out to the Lace Mill, in the Kingston Midtown Arts District to discuss “Gentrification & The Creative Class.” Hosted by Chronogram’s Editorial Director, Brian K. Mahoney, and O+ Festival founder Joe Concra, the conversation quickly turned into a community discussion about the tenability of Kingston, and the artistic ideals that have led to the rise and the current concerns of the creative class in the city.

Concra noted in his opening address to the community that it was a “dangerous” time to be an artist in Kingston. Over a decade ago, the artist class found Kingston neglected and underserved as an artistic community. There was still an arts scene, but it had become inactive and insular, having faded along with the manufacturing jobs. It took years of building up community arts events, galleries, and restaurants, from both long time Kingston residents and newcomers, to elevate Kingston to the where it is now. Kingston, the little town that could, is now a vibrant, desirable place to live, but the same artists who found the town attractive for its affordability ten years ago are now reaping what they have carefully sown.

Many places in the Hudson Valley have been in the sights of developer giants for years, and it’s recently that this corporate attention and subsequent acquisition have lead to strife, in Kingston and elsewhere in the Hudson Valley. Developers and large real estate moguls descend upon a town with the intent of a fast turnover. They buy up the city, blocks at a time, and raise rent for apartments and stores, or purchase land that was previously community use and immediately start building condos or shopping malls. This is the image many locals have of city-goers, gentrifiers without a stake in the community, eager to make money and leave.

This is not the whole story, just the story that makes headlines. 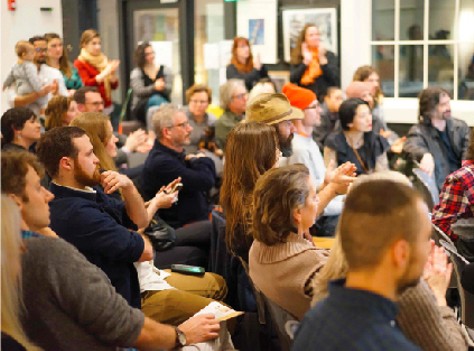 The truth is that most of the people migrating northward from the city are here to settle. They have mortgages, they are involved in the community, and they are deeply invested in creating a town where they can belong. They do not want ownership of Kingston, they want to be a part of it. The salon allowed for both parties to come forward and talk about their problems and work towards solutions. Urban planners, nonprofit leaders and residents each had their say, but it was apparent that the issues stemmed from a desire to stay in Kingston, rather than a desire to keep Kingston the same.

It’s hard to separate emotionally charged opinions from reality. Everyone listening at the conversation had been affected by gentrification, and all in attendance were seeking some kind of community. It’s easily forgotten that many who have moved north have been pushed out of the city for the same reasons long time residents cited as motivations to move out of town. Transplants are not looking to supplant or replace existing residents, but live alongside them. The draw to Kingston lies in its people, in the environment that Kingstonians–all Kingstonians–have created, developed, and nurtured into existence.

Stepping back, there is no denying that gentrification is happening, although not by the Brooklyn resident turned homesteader. Instead it’s the larger corporations who seek to profit on the backs of Hudson Valley residents. Also true is the fact that the government has capitalized on these gains, and have not stepped in to protect residents and those seeking a living in the Hudson Valley.

Overall, the salon offered solidarity and community, creating a safe social space for people to interact with the changes in their own backyard. People were encouraged to take action, network, and form stronger partnerships with each other in order to move forward. MAD Kingston, RUPCO, and other community arts organizations were well-represented, proving that the artist community cares, and isn’t going anywhere.

Interested in attending or supporting one of these salons? Craft beverage and culinary artisans will be invited to sponsor each monthly event, offering an opportunity to gain new followers for their products. Please email Brian Berusch for more information on the upcoming conversations at Beacon and Rhinebeck.

Linda Codega is a graphic designer and writer who loves clean lines, arrows, caps lock and talking about comic books. A Southern transplant, she now works for Luminary Media in Kingston, New York, despite the winters.