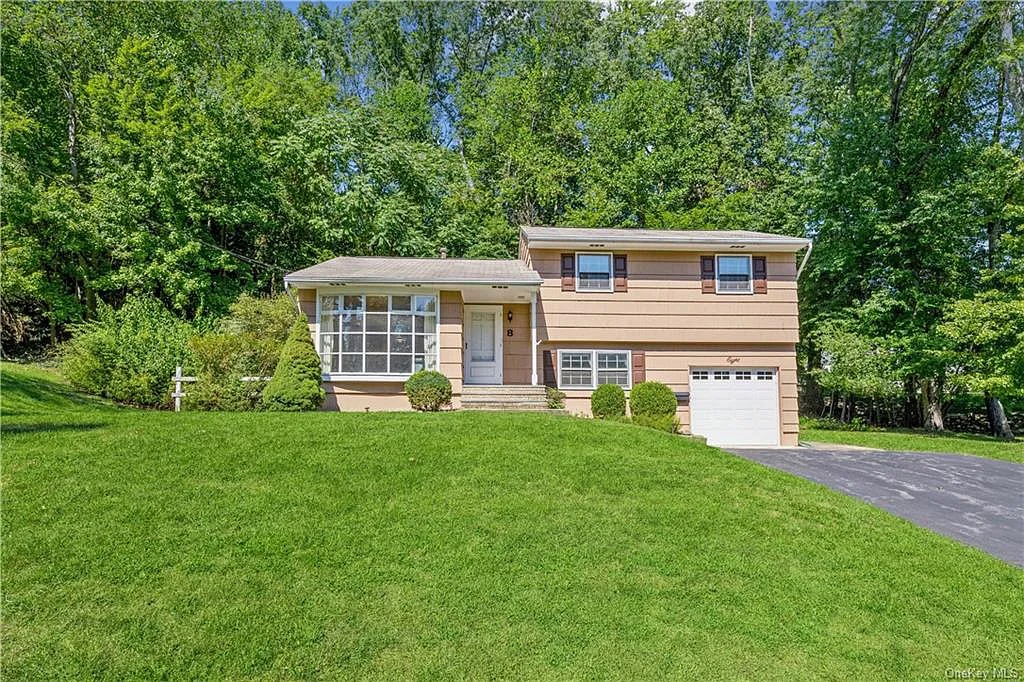 The interior parts of the Hudson Valley, away from the River, were rural enclaves until the 1950s, when progress in the form of the New York State Thruway, the Tappan Zee bridge, and other initiatives encouraged New York City-ites to seek homes here.

There was a boom in building around then, and the ideal home styles were those that were easily constructed, could fit a burgeoning family, and allowed room for entertaining and cocktail parties (hello, Mad Men). The split-level design checked all those boxes, and today we’re looking at an iconic version that’s still managed to hold onto details that must date back to its original build in 1959. 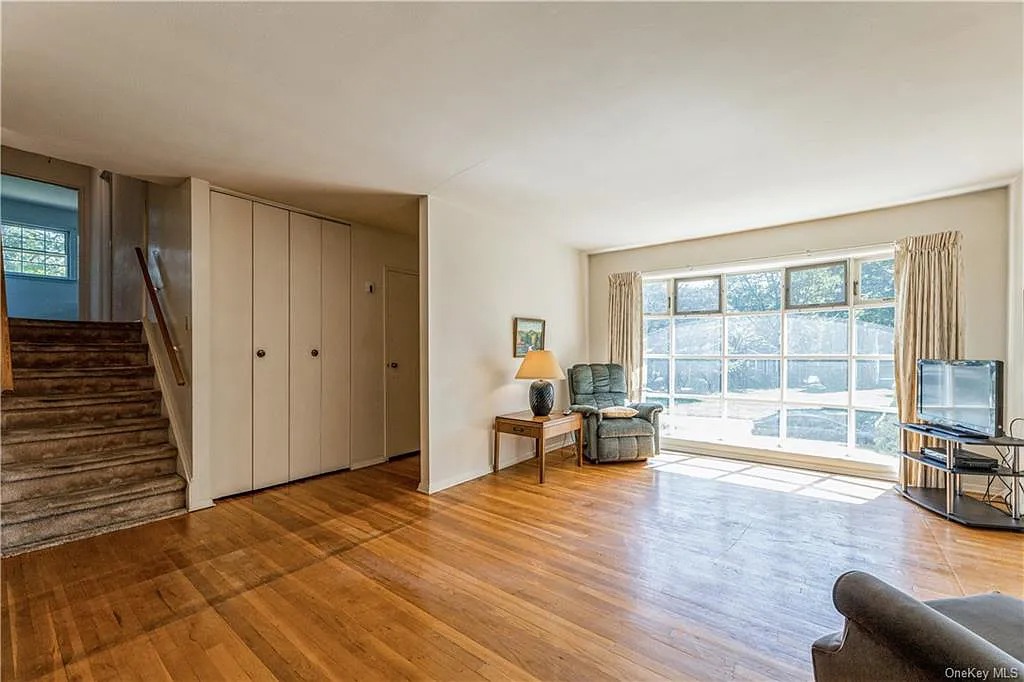 This four-bedroom, 1.5-bath is in New City, one of many Rockland County areas that began with orchards and now serve as bedroom communities for commuters (not that there’s anything wrong with that). Luckily, the main floor and upper floor of this home have kept their original hardwood floors, which are showcased as soon as you walk through the foyer and into the living room. A multi-paned picture window drowns the space in sunlight. 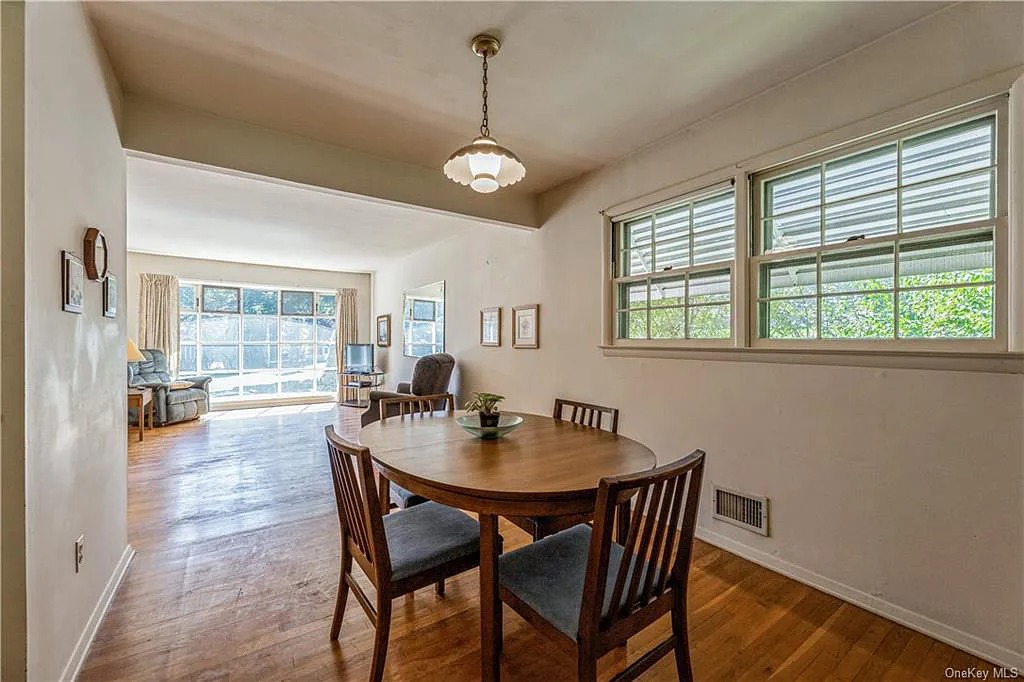 Off the living room is a formal dining room with a cute lil’ Early American pendant light. It’s evident here that the floors might need buffing, but the neutral walls are in good shape. 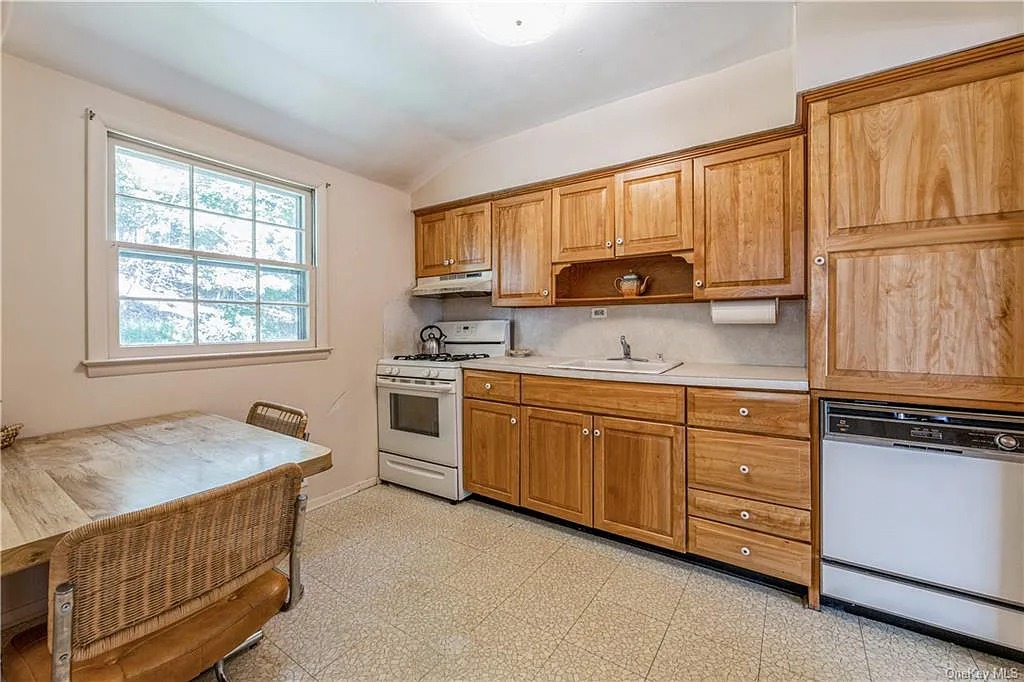 The eat-in kitchen looks like it got a late 1970s-early-’80s update, but the new owner would most likely want to change things, beginning with the linoleum/vinyl tile floor and the dishwasher. With the formal dining room nearby, another idea would be to scrap the “eat-in” part, redo the entire kitchen, and add a cooking island to increase storage. 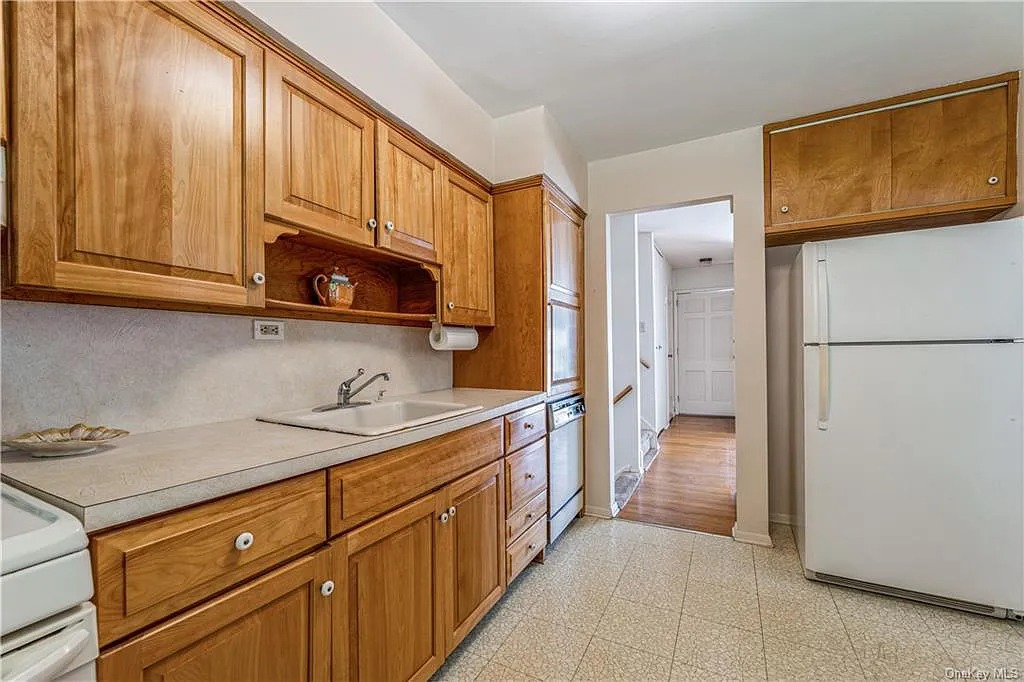 Off the kitchen, you can see handrails that mark the need to make a decision: Up or down? 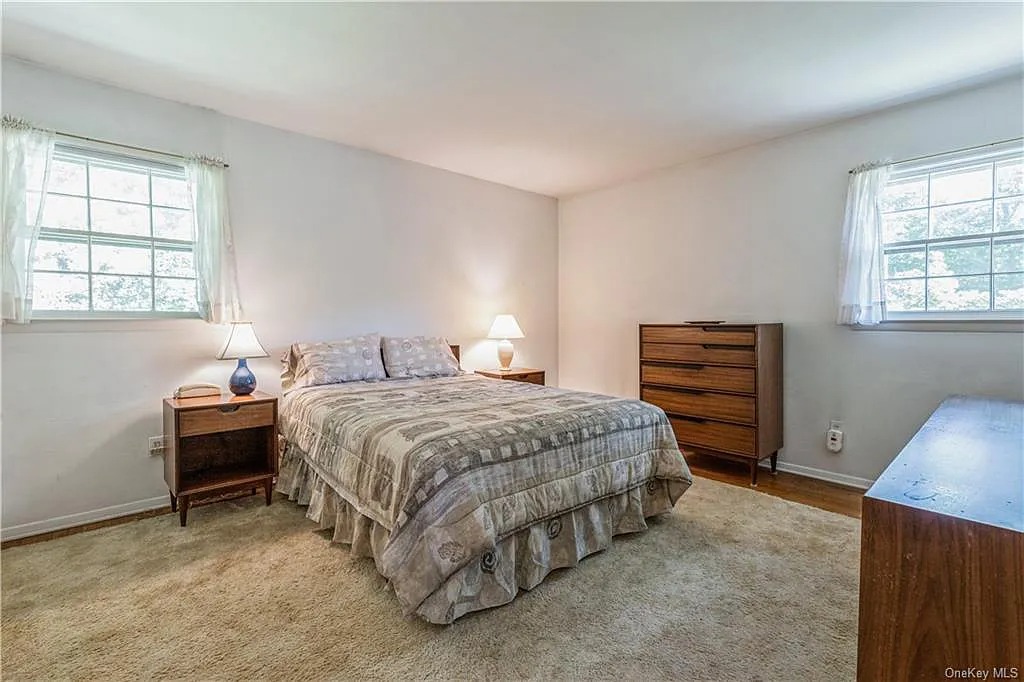 Let’s go upstairs. The primary bedroom is big and has two closets, along with access to the full hallway bathroom. 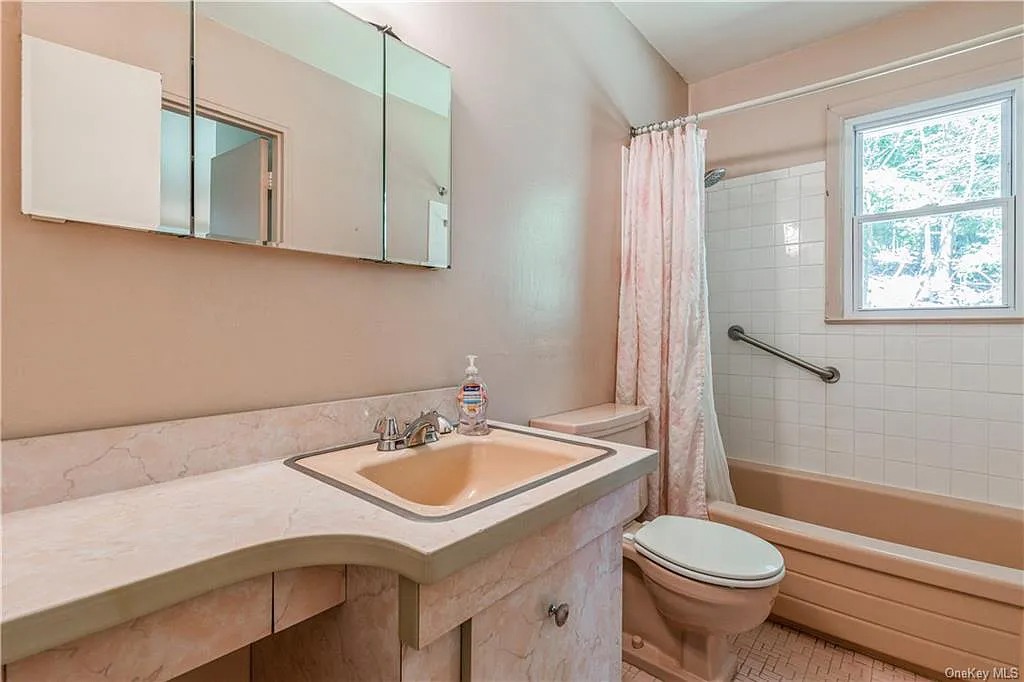 Welcome to the 1950s! Yes, this Pepto-Bismol bathroom is dated, to be sure. But it’s in pristine condition, and if you’re a lover of pink bathrooms, you might want to keep it. 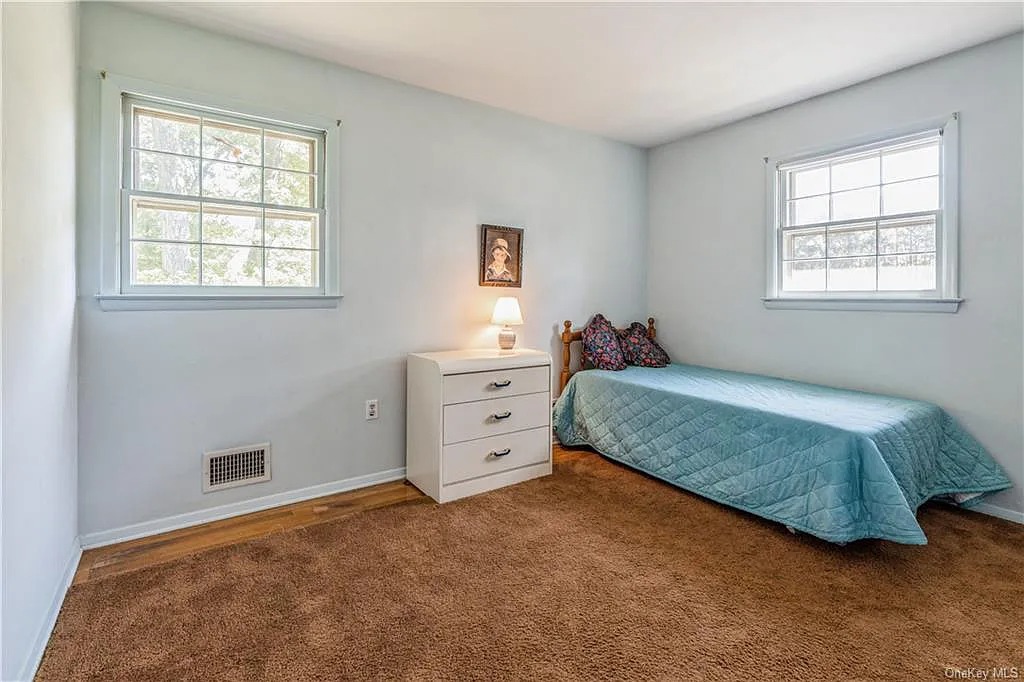 Two secondary bedrooms round out the top floor. 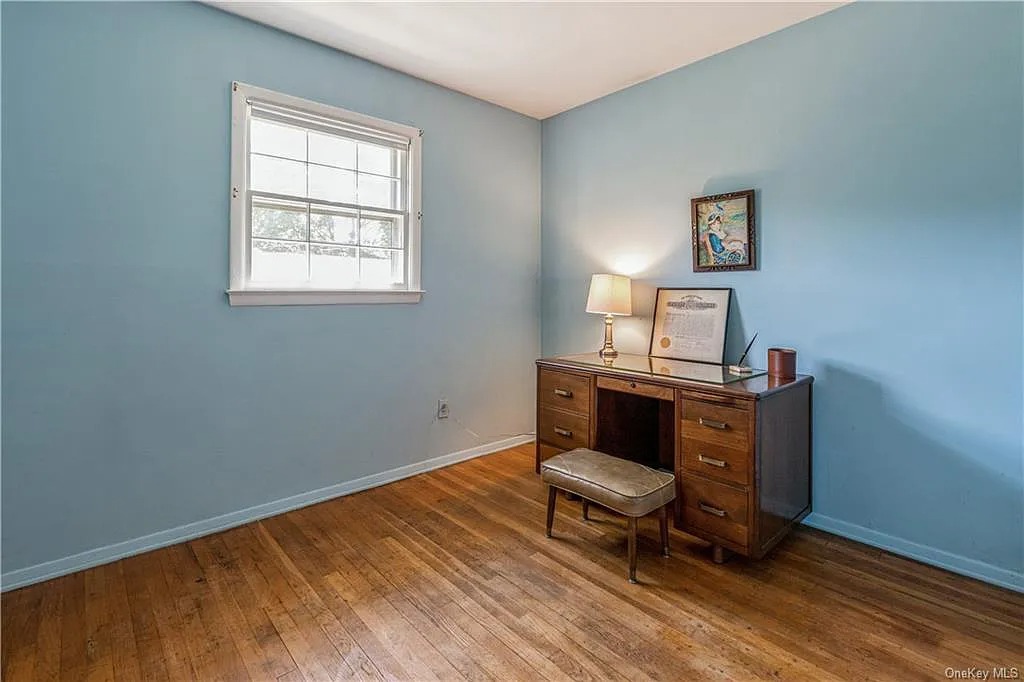 They each have blue walls and those original hardwood floors. It’s clear this house has been well-maintained—kudos to the caring owner, and a bonus for the new one. 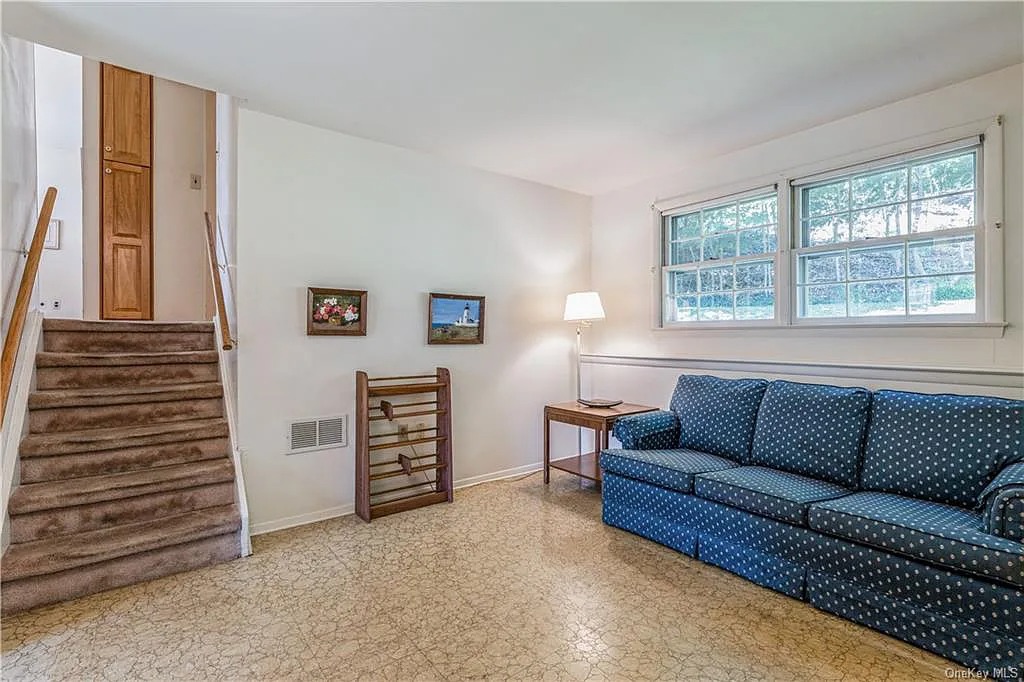 Head down the fuzzy brown stairs to the lower level, which has a linoleum-floored family room. If you don’t want to rip up that floor, you’d definitely want to add a fluffy rug or two: Those sub-level floors are chilly in the wintertime. 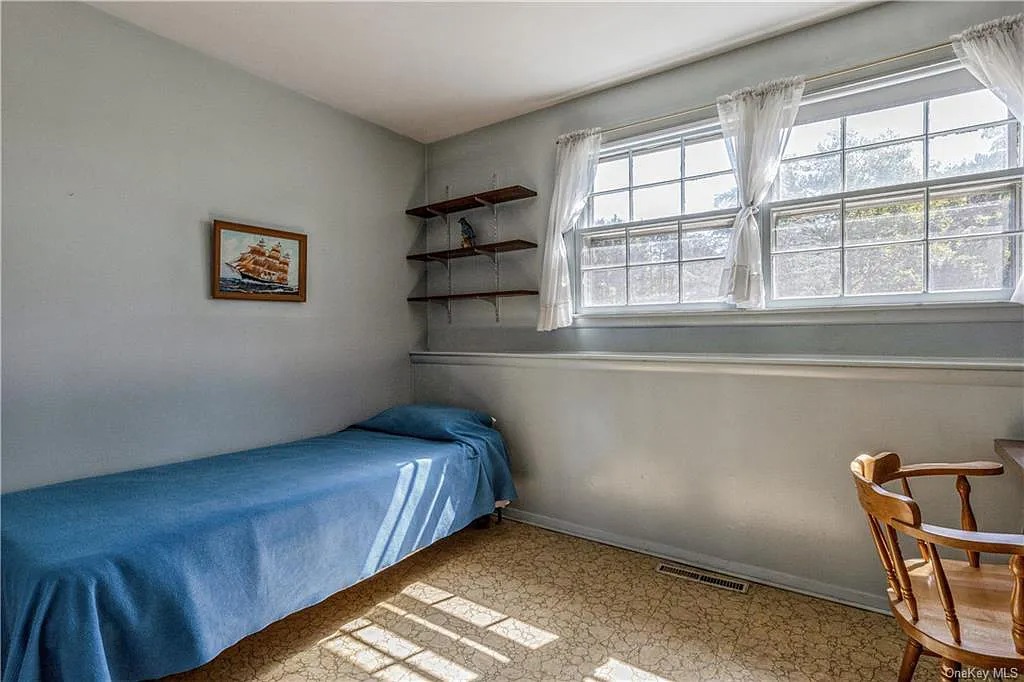 Same for the fourth bedroom, also on the lower level. Those windows, though, help make it a sunny space. You might need sunglasses for the next shot… 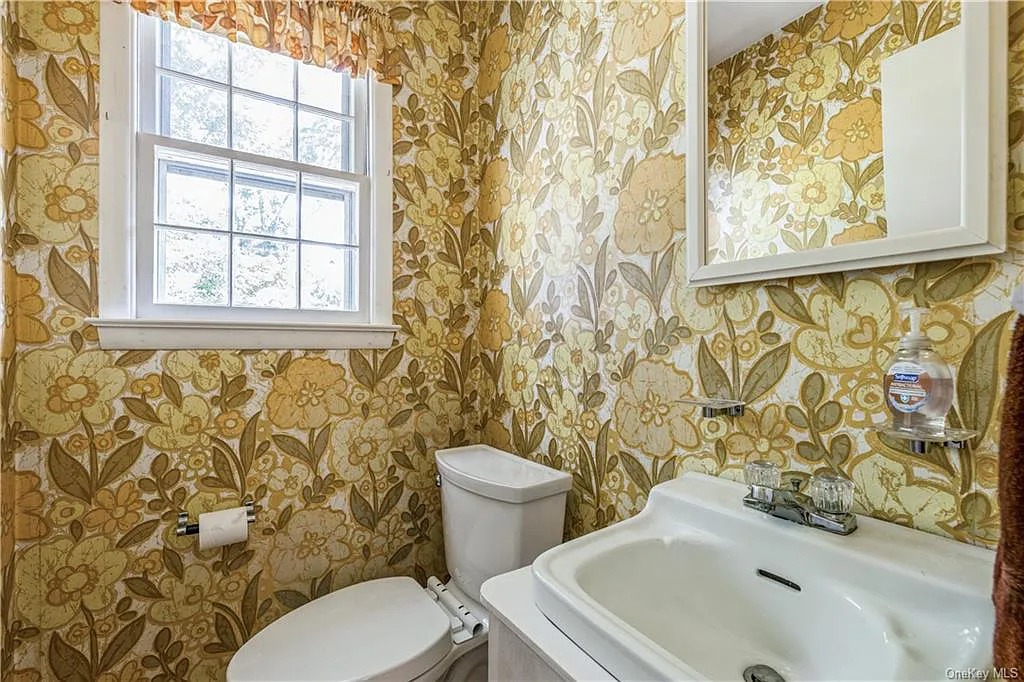 Wow! Slip on a pair of Jackie-Os, and your bell-bottoms, because this wallpaper just screams the ’70s, man. Again, it’s dated, but it too is pristine, down to that shapely sink and the glass shelves above it. That wallpaper is so classically 1970 that it would be a shame to get rid of it. 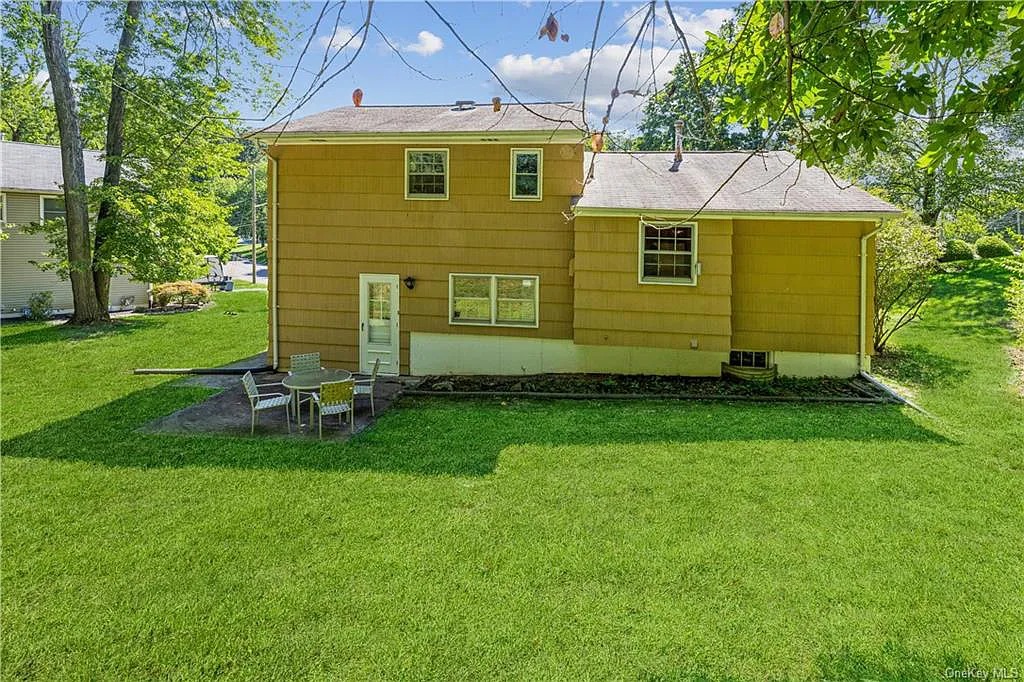 The back of the house is a perfectly blank canvas for whatever you’d like to create. It honors the 1950s need for lotsa manicured lawn, though nowadays a garden or two would be a great idea and would use much less fertilizer and weed killer. 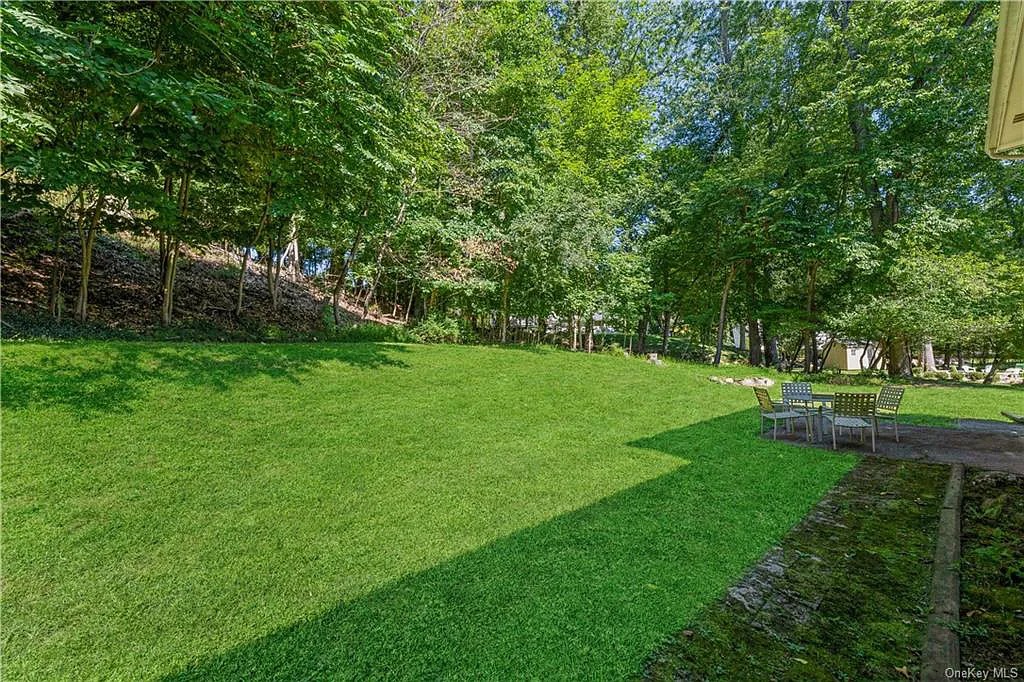 The property—which totals nearly an acre—extends past that manicured lawn line. Of course, the house is ideally located on a nice street, close to shopping and restaurants, and it’s a less-than-one-hour drive to Midtown Manhattan.

If this beauty sparks your Mid-Mod dreams, you’re too late. In the time it took for this story to be written, the house went from For Sale to Pending. Ugh—it’s a good lesson in striking while the iron is hot. Still, Rockland County has lots of Midcentury Modern-era homes on the market, so check with Donna Budoff of Coldwell Banker Realty for more.