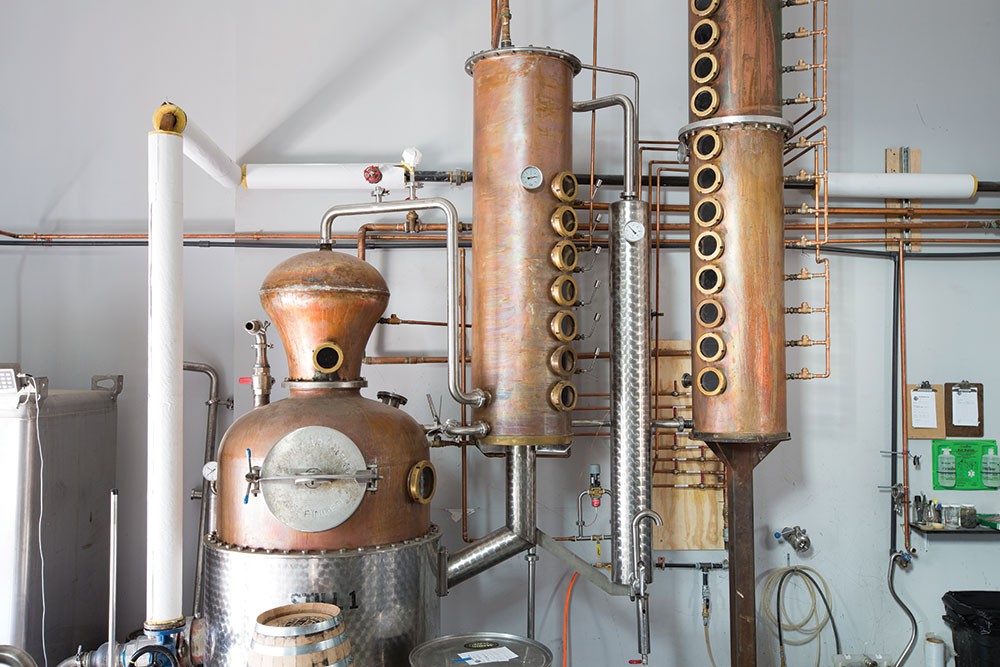 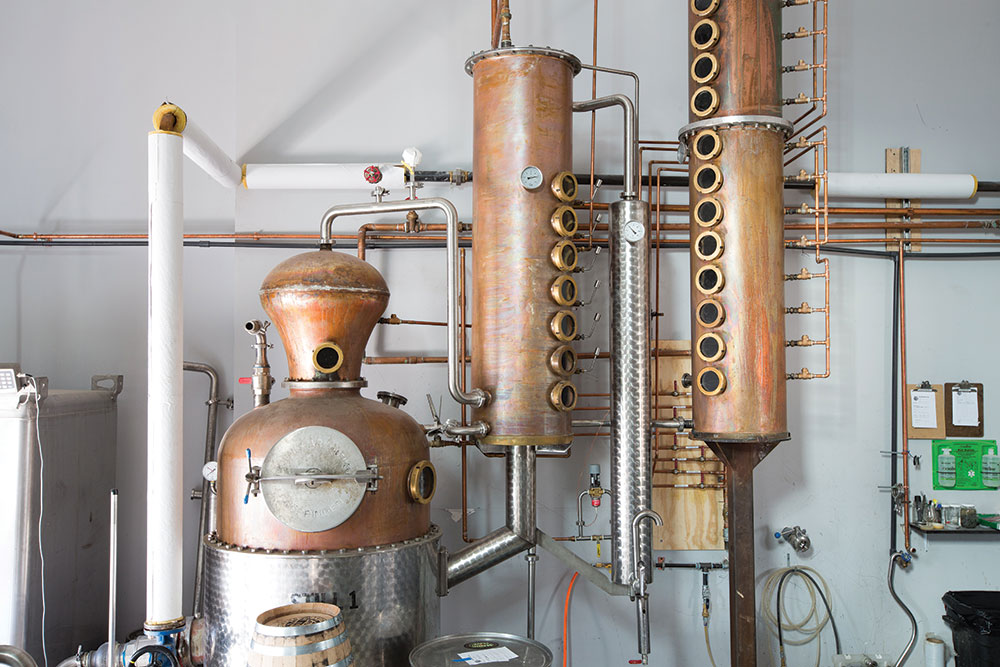 From its heyday in the 1920s through its mid-century lull in popularity, gin has had a rocky course in American history. And the spirit itself, made by infusing a neutral base liquor with herbs and botanicals (namely juniper), has also seen its fair share of fluctuations.

But today, things are looking up for gin. Because its broad flavor profiles make it uniquely suited to mixing, gin is getting a lot of attention in terms of the exploding cocktail culture and the craft-distilling trend. In fact, gin makes a compelling business case because it doesn’t need to be aged, meaning distillers can expect to see returns on their product much sooner than with other spirits, such as whiskey, that require years of barreling and storage.

Propelled by some radical shifts in New York State’s distilling laws, Hudson Valley craft distillers are creating a gin renaissance, and there’s never been a better time—or place—to enjoy it. The 2007 Farm Distillery Act greatly reduced the legal hurdles for craft distillers to produce and market their products (as long as they use 75 percent of New York State-grown ingredients), and the 2014 Craft New York Act allows distillers to serve “full pours” and cocktails from their tasting rooms, further establishing the region as a tourist destination. The state also offers grants for marketing and development, including $1 million recently awarded to Empire State Cooperage to satisfy the increasing demand for oak barrels. In the past five years alone, the number of distillers in New York State has skyrocketed over 500 percent, with many of them in the Hudson Valley.

While offerings in the area run the gamut, there are some common themes emerging to give Hudson Valley gins a distinct character, and chief among them is balance. Many producers are opting to limit the variety of added botanicals, using fewer but adding more of each one for more expression in the finished spirit. Distillers are by and large embracing the New American style of gin, dialing back the juniper in favor of citrus and floral notes. Local producers offer plenty of variety to satisfy the seasoned gin drinker, but if you think maybe gin isn’t your thing, it may be time to give it another shot (but perhaps not literally). Almost all of the distillers featured here report visitors saying, “I don’t usually like gin, but I like yours.” Even if you haven’t drunk gin since college, these seven Hudson Valley distillers are making it like you’ve never had it before, and they definitely deserve a try. 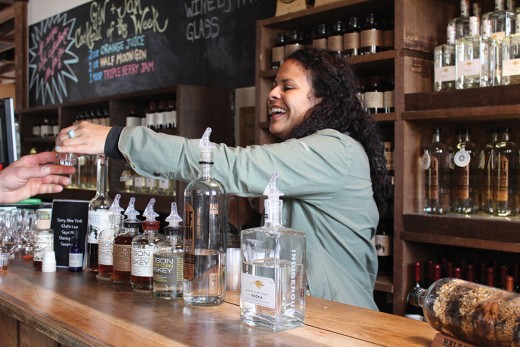 Starting in 2003, Tuthilltown Spirits kicked off the craft-distilling movement in New York State after founders Ralph Erenzo and Brian Lee happened upon an obscure 2002 piece of state legislation allowing small distilleries to get a license for $1,450 instead of the $60,000 it cost back then. Since then, the two have been instrumental in legislation reducing red tape, lowering the cost of permits, and streamlining the application process, inspiring dozens of craft distillers to follow in their footsteps. It’s no surprise that Tuthilltown Spirits’ Half Moon Gin is equally inspiring. Erenzo and Lee use an 80 percent apple, 20-percent corn base infused with nine botanicals that’s perfect for cocktails. Erenzo says they deemphasized the juniper to keep the gin’s flavor from approaching medicinal. “Our goal was to keep it more cocktail friendly and approachable,” he explains, and “to make it fun to drink.” Don’t take his word for it though: At Tuthill House, the distillery’s adjoining restaurant, set in a historic 1788 gristmill, celebrates the current “ginsanity” trend with special drinks, cocktail classes, and even some gin-infused food on the menu (like seasoned Brussels sprouts with an added kick). The Gin and Jam, a mixture of gin, orange juice, and jam from local farmers, is served in a mason jar, ready for shaking.
14 Grist Mill Lane, Gardiner / (845) 255-1527 / Tuthilltown.com 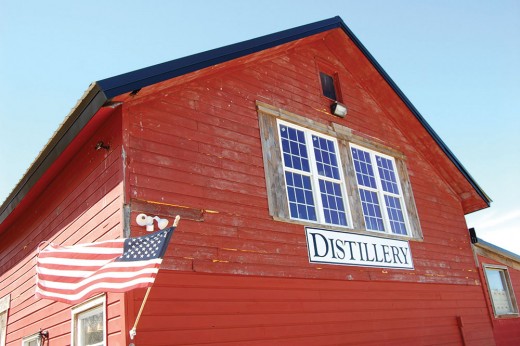 The idea for Hudson Valley Distillers was born around a campfire when old friends and college frat brothers Tom Yozzo and Chris Moyer were hanging out drinking craft spirits. “We knew we could do this just as good,” recalls Moyer. Fast-forward to April 2014 when Hudson Valley Distillers opened a renovated barn’s doors at Spirits Grove Farm in Clermont, where Yozzo and Moyer have been making exceptional liquors ever since. Spirits Grove Gin stretches gin’s definition to the limit, making for an exceptional and unusual experience. “We did a couple of experiments on the still, and found what we liked,” Moyer says. Rather than start with a corn- or grain-based neutral spirit, Hudson Valley Distillers distills wine from neighboring Hudson-Chatham Winery. The gin is then flavored with a proprietary blend of botanicals, including juniper and staghorn sumac foraged on the property, which adds a soft but crisp touch of citrus. The results make for a very unusual gin. “It’s a lot like a Christmas tree punching you in the face,” says Moyer. The wine base is definitely expressed, creating a smooth-mouth feel, and its grape-brandy flavor might be familiar to fans of pisco—in fact, it makes a great pisco sour. But Moyer likes to keep it simple. To make a Hudson Valley Foghorn, he mixes the gin chilled with ginger beer and some lime at the Cocktail Grove, an indoor/outdoor tasting room, where visitors can bring their kids and dogs and hang out on the lawn, listening to music.
1727 Route 9, Germantown / (518) 537-6820 / HudsonValleyDistillers.com 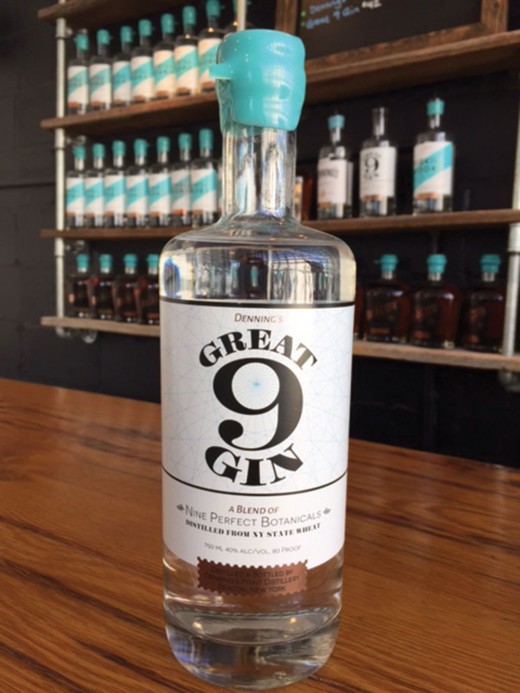 Founded in 2014, Denning’s Point sits at the crossroads between old and new: Its spirits have a Colonial history, but founder Karl Johnson operates his equipment from his iPhone. Great 9 Gin is named for one of the original land patents given to Hudson Valley settlers, it’s decidedly modern. Instead of the typical double-barrel-juniper-blast, Great 9 Gin’s floral notes of citrus form early on the palette and finish gently into a clearly defined but mellower juniper flavor, making it great for mixing. Denning’s Point serves house cocktails to live music in its 2,800-square-foot tasting room, converted from an auto garage. Its Negroni Twist updates the classic combo of gin and sweet vermouth by substituting Aperol for Campari.
10 N. Chestnut Street, Beacon / (845) 230-7905 / DenningsPointDistillery.com

Chris Weld has been fascinated by distilling since eighth grade, when he tried to build a still for a science fair. Luckily, his mother stopped him from committing a federal offense, but more luckily, he later pursued his passion, opening the Berkshires’ first legal distillery since Prohibition. Berkshire Mountain Distillers, which has operated on an old apple orchard with its own spring in Sheffield, Massachusetts, since 2007, is a “distiller’s distillery.” Weld says running the spring water through his salvaged Brown-Forman still makes for an exceptional gin. “The core temperature is very gentle on the botanicals,” he says, allowing them to fully express their flavor. Berkshire’s flagship Greylock Gin is a juniper-forward London-dry style balanced with plenty of citrus and lots of florality, perfect for a dry martini. But gin aficionados should watch for Weld’s limited-edition Ethereal Gin. Each batch is different: One emphasizes rose hips (Batch 6), another exudes brown spice (Batch 8), and others barrel age for 18 months to make what’s arguably the king of Negronis. Recently, Batch 12 was in the works, but Weld kept the details top secret. Let’s see what he does next.
356 South Main Street, Sheffield, Massachusetts / (413) 229-0219 / BerkshireMountainDistillers.com

Orange County Distillery was born of a surplus of sugar beets that would’ve rotted in farmer John Glebocki’s barn in Goshen if he and his friend Bryan Ensall hadn’t decided to turn it into vodka instead. Two years later, the distillery makes sugar beet vodka, whiskey and, of course, gin. For Glebocki and Ensall’s gin, every ingredient is grown right on Glebocki’s farm, including the botanicals. “If we can’t grow it, we won’t use it,” says Ensall. The two substitute local lemon balm and citrus mint for orange peel, adding lavender for floral notes. The gin’s base is 100 percent corn, distilled until neutral and infused afterwards with botanicals. Its flavor is New American, with juniper giving way to citrus for a more balanced, drinkable spirit. Try it in Not by the Hair of My Ginny-Gin-Gin at the distillery’s tasting room. It’s a mix of blood orange juice, gin, and mint-maple syrup that showcases a slew of notes that otherwise may go unnoticed.
19B Maloney Lane, Goshen / (845) 651-2929 / OrangeCountyDistillery.com

Prohibition Distillery in Roscoe got its start in 2009, with founders John F. K. Walsh and Brian Facquet working alongside Ralph Erenzo and Brian Lee at Tuthilltown Spirits Distillery in Gardiner. In 2013, Walsh and Facquet opened up their own place in a converted 1929 firehouse, and have been watching the accolades pile up ever since. The secret to their gin is that they start with their award-winning Bootlegger Vodka (which, last year, picked up double gold at the Fifty Best Domestic Vodka competition, and a gold at the New York International Spirits Competition), made from 100 percent New York State corn, so it’s naturally gluten free. From there, Bootlegger Gin is kept simple, with only five botanicals added, so that each one is expressed in the final product. According to Facquet, one visitor to the tasting room compared Prohibition’s gin to jazz, saying, “You can taste each individual note, but they all go together so well.” Unlike other distillers, Prohibition set out to make a more juniper-forward, London dry-style gin, with the other botanicals helping to “smooth out the finish,” says Facquet, noting that its flavor was designed around a simple philosophy: “You shouldn’t have to explain spirits. Someone should be able to pick up a bottle without explanation and say this is a great gin.” Visitors to Prohibition Distillery can feel great about drinking it too. All proceeds from tours and tastings are donated to benefit veterans’ associations, says Facquet, a Navy veteran himself.
10 Union Street, Roscoe / (607) 685-8989 / ProhibitionDistillery.com

In the sleepy town of Warwick, Jason Grizzanti and Jeremy Kidde have been quietly building an empire. Since opening in 1994, Warwick Valley Winery & Distillery has slowly been expanding, creating new products like fruit brandies along with its now famous Doc’s Draft Hard Apple Cider. In 2012, they opened Black Dirt Distillery, which produces whiskeys, an applejack, and of course, Warwick Gin, which was designed from the outset for cocktails. “We experimented with over two dozen different botanicals and narrowed it down to eight or 10,” says Kidde. “We made the selection based on which paired best in a cocktail. I’ve never heard of anyone else doing it that way.” The approach definitely paid off: Warwick Gin is close to perfectly balanced. From the initial shock of juniper, it splinters into a half dozen components balanced so evenly that to emphasize one over the other takes little concentration. Floral prose aside, the masterful balance makes it a perfect gin for cocktails. Visit Warwick Valley Winery’s rustic tasting room to see for yourself.
114 Little York Road, Warwick / (845) 258-4858 / WVWinery.com 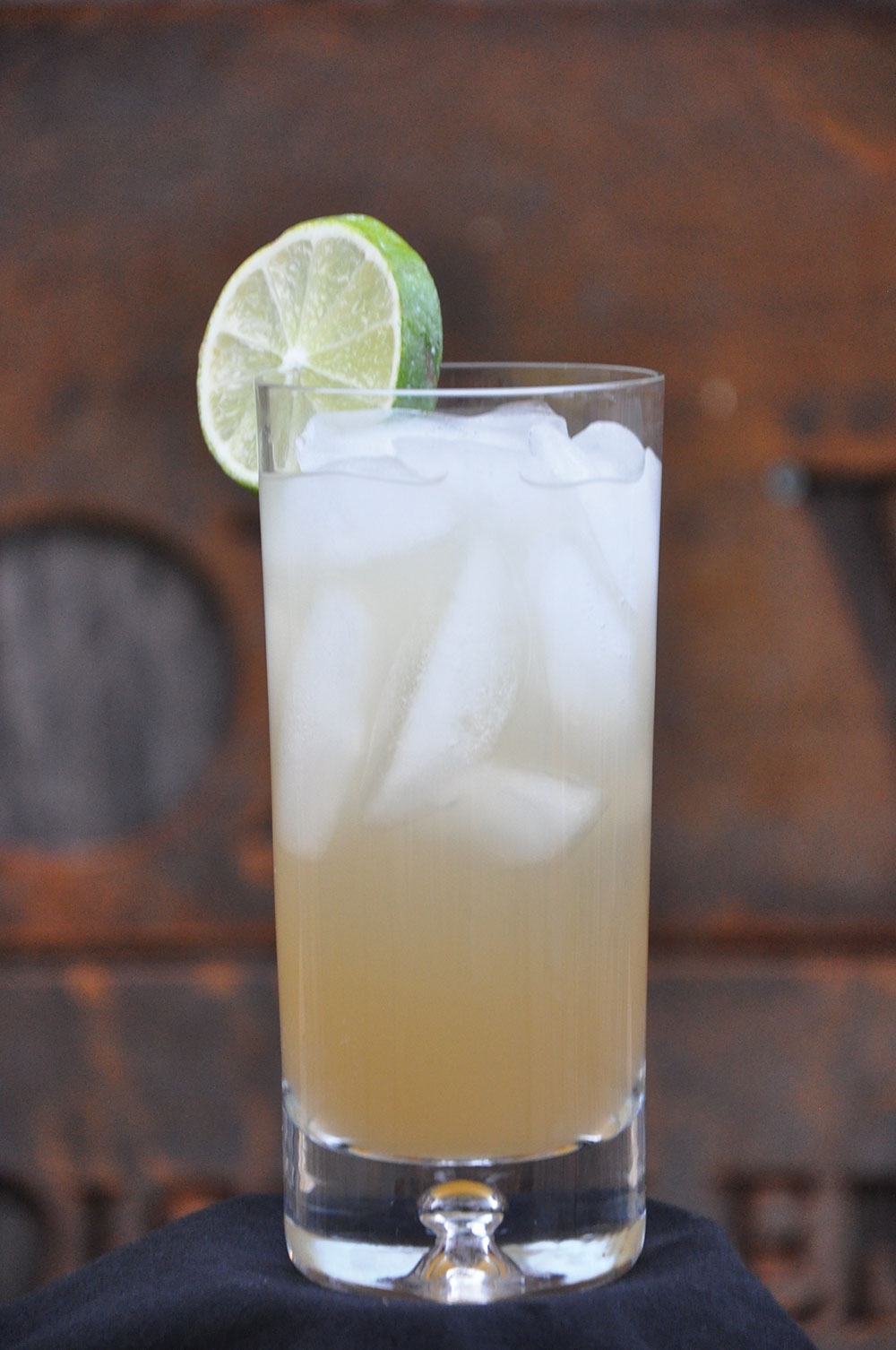 Gin and Jam
Tuthilltown Spirits Distillery
3 oz. lemonade
1 oz. Half Moon Gin
1 tbsp. local jam
Combine gin and lemonade in a sealable jar and serve with a spoonful of jam on the side, encouraging guests to stir it in and shake the cocktail themselves. 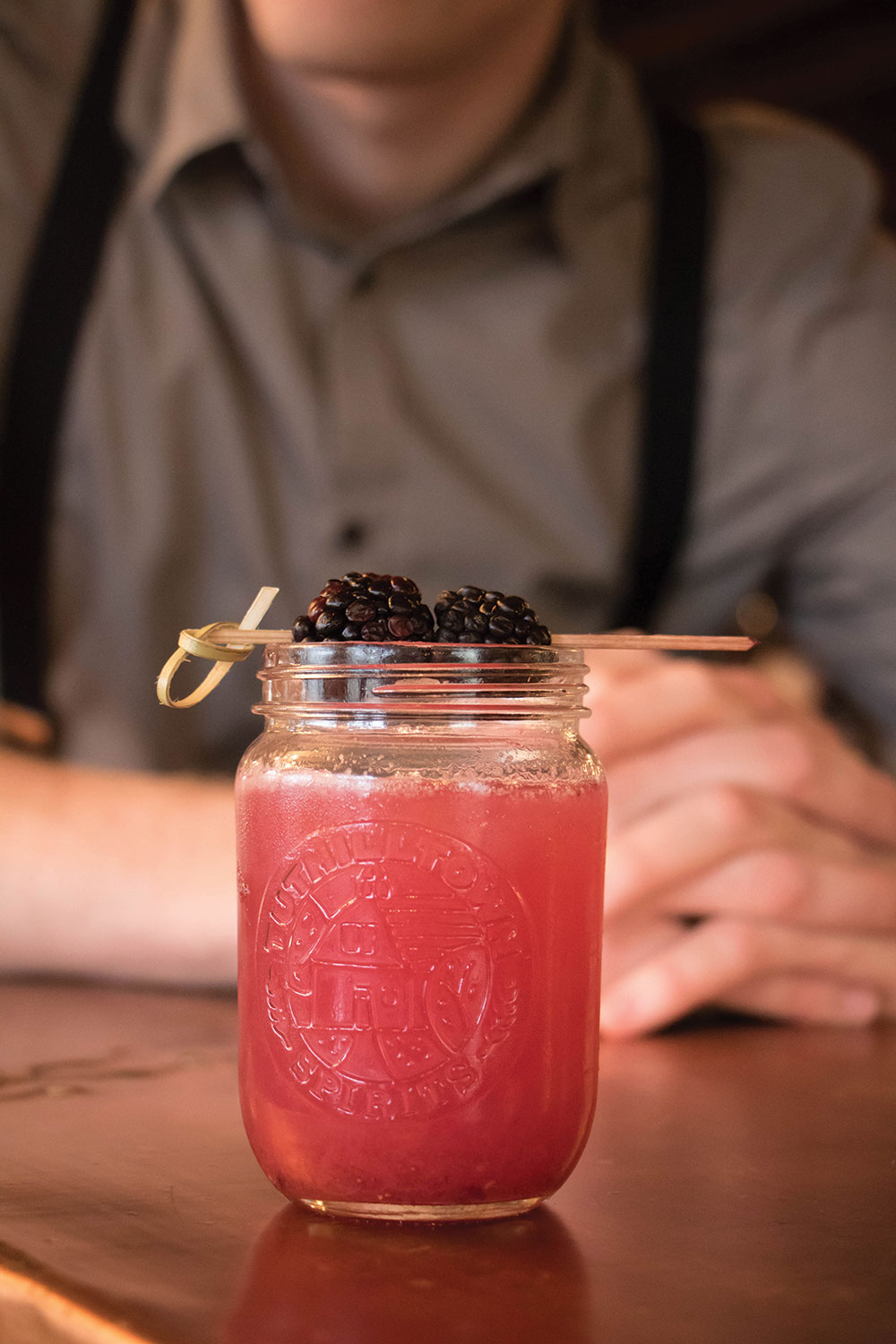