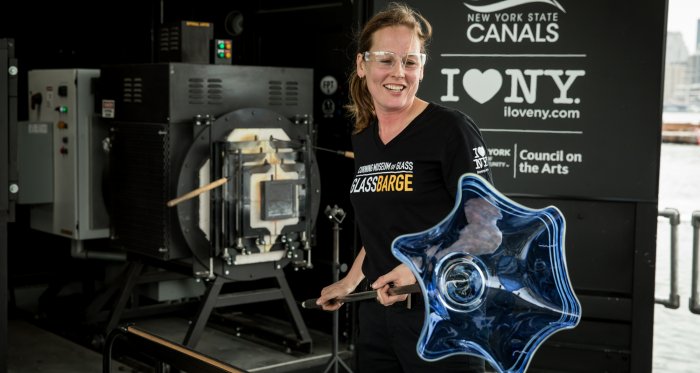 The Corning Museum of Glass, a worldwide attraction, has on display some of the world’s most exquisite glass collections, spanning over thousands of years of history. Glass objects and glassmaking techniques from various parts of the world are showcased in several different galleries. Glassmaking is in fact our country’s first industry: it all started with a glass workshop in Virginia in 1608. Glass in America gallery, for instance, showcases early and rare artistic and decorative pieces that are worth a visit. The collections include such varied glass objects as Edison’s first successful light bulb and light bulb testers, Venetian goblets from the 16th and 17th centuries, and ancient Greek jewelry made with glass, pendants and beads.

Founded in 1951, The Corning Museum receives nearly half a million visitors a year. In 2015 it expanded to include a 26,000 square foot new wing dedicated exclusively to contemporary art and design, and housed in a building shaped like a large white box. 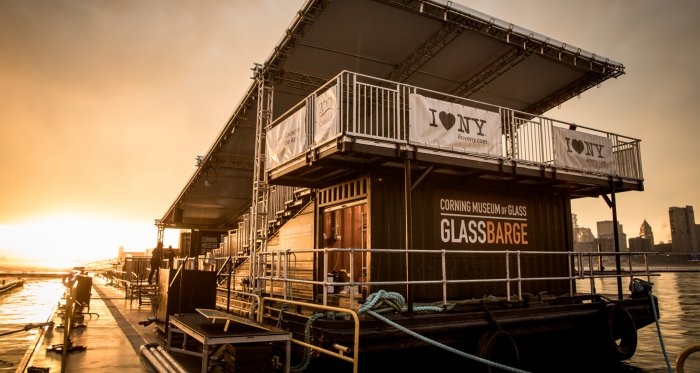 This summer however, The Corning Museum is hosting a floating glassblowing studio on the Hudson marking the bicentennial of the Erie Canal, which opened in 1817, and the 150th anniversary of moving the glassmaking factory from Brooklyn to Corning – Corning Glass Works company was founded in Massachusetts in 1851, moved to Brooklyn, and then to Corning, NY in 1868. The company opened the museum in 1951 to educate the public about various glassmaking techniques from antiquity to the present.

The GlassBarge, pushed by historic tugboat W.O. Decker, started its tour in Brooklyn last weekend in May, stopped in Yonkers in early June, will be in Poughkeepsie this weekend, June 8–10, and in Kingston at the Hudson River Maritime Museum the following weekend (June 15-17). The tour, which recreates the original route, will end in Corning on September 22.  See the full docking schedule.

The program includes glassmaking demonstrations and lectures, and other activities in conjunction with partnering cultural institutions along the route. Art on a barge is reminiscent of the famous opera performance on a steamer in Werner Herzog’s iconic movie Fitzcarraldo—the human spirit animated by art in any given setting.