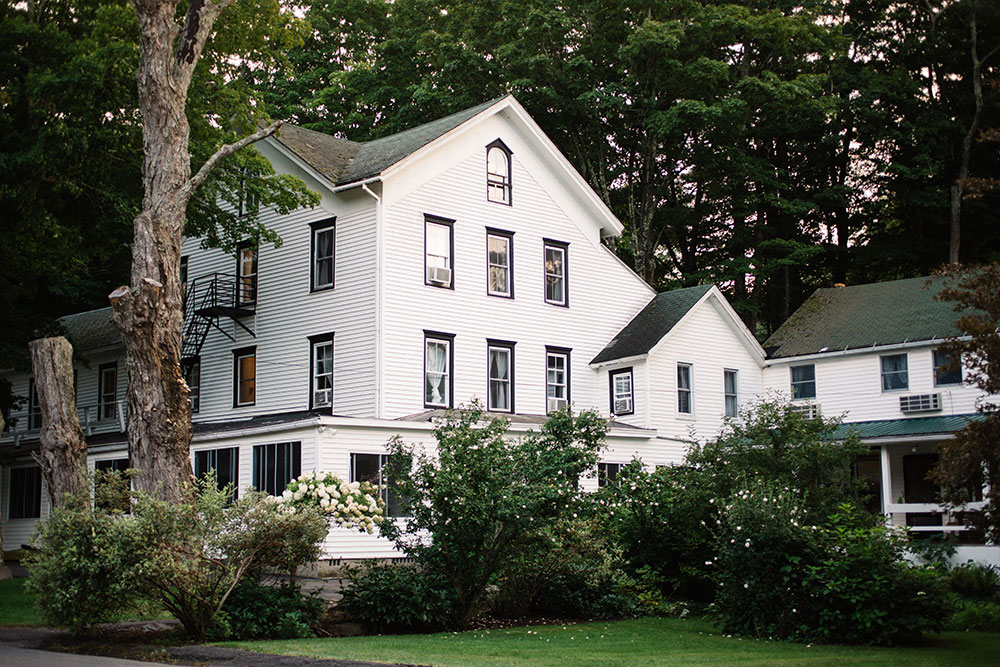 Greene County is Catskills resort country at its finest. Whereas the Sullivan County resorts all perished, their northeastern counterparts have quietly survived, ticking over year to year thanks to a steadfast core of veteran vacationers. In the hamlet of Round Top alone, there are four resorts in a one-mile radius.

The most iconic of these is perhaps the Glen Falls House, which has been in continuous operation since the late 19th century. In its 137-year history, the property has changed hands multiple times, undergoing several expansions in the ’60s in the waning golden days of the Catskills resort boom.

Most recently, in May 2017, Glen Falls House was bought by two bright-eyed entrepreneurs armed with a vision and backed by a group of private investors. 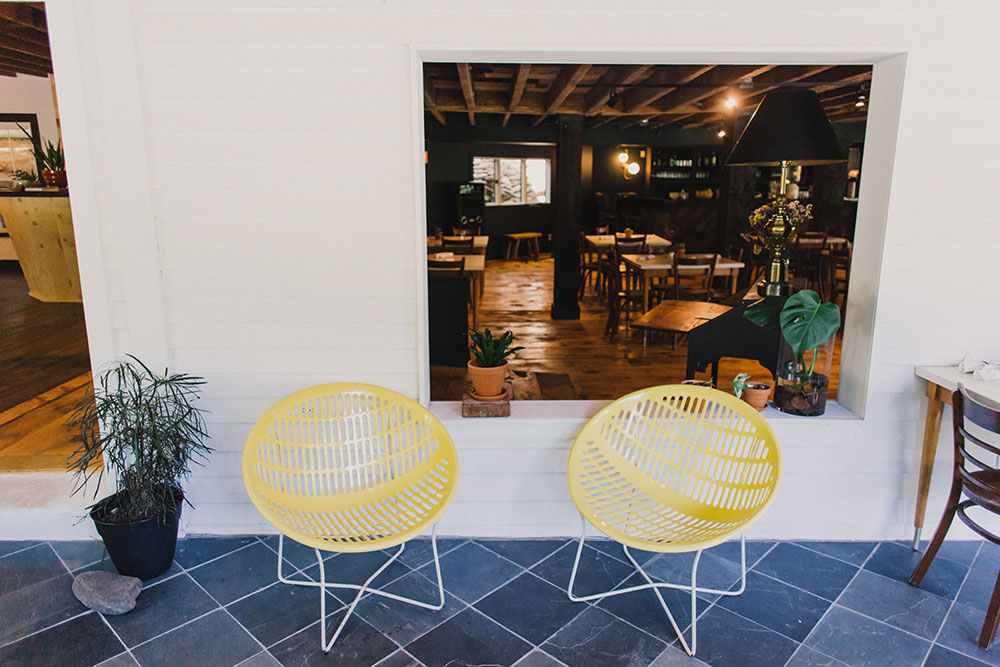 Ex-punk rocker Greg Brier is owner/operator of Greenpoint’s effortlessly cool nightclub The Good Room, while Jonathan Picco hails from Montauk’s trendy hotel-on-top, venue-on-bottom—The Surf Lodge. Between them they have 25 years of experience in hospitality (though Picco is a mere 30). For the two years before they bought Glen Falls House, Picco spent every free weekend scouring the New York countryside looking for the right property to build out their vision. “I had the intention, and I knew what would qualify based on the business plan and the functionality we wanted,” Picco says. “Our goal was really to find a property with a historical connection and enough capacity to grow into, with really incredible access to nature. And the freedom to make a lot of noise and make a lot of mess.”

Glen Falls checked all the boxes. With 42 rooms and 47 acres, there is definitely room to grow into. And it has a storied legacy of hospitality. “It was already established,” Picco says. “It just needed someone to reformat it for our generation.”

Elbow Grease and Good Will

The property spreads out from the Main House—an impressive three-story Colonial farmhouse built in 1881. This building has been fully renovated to include a reception desk, 17 guest rooms, and the restaurant. Two other motel buildings offer 25 more rooms.

“We definitely found a fixer-upper at a good price,” Picco says. “We demoed this whole house and put it back together in 45 days with a skeleton crew of six people. It’s been more elbow grease than anything—and a lot of great will from neighbors.” 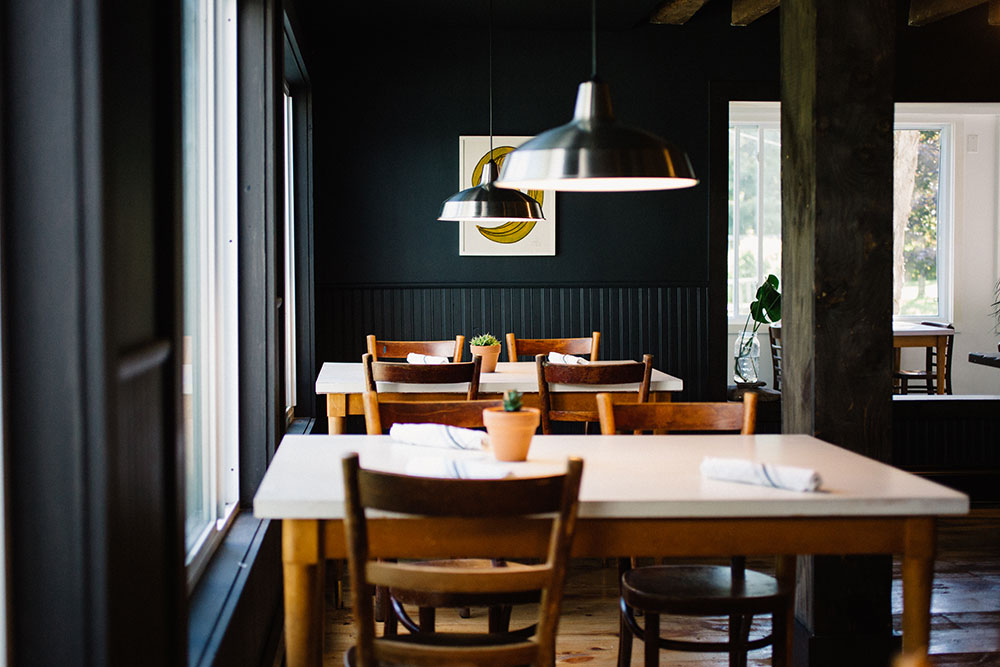 When Picco and Brier bought the place, the decor was a Millennial’s nightmare of wall-to-wall carpet and drop ceiling tiles with fluorescent lights. Stripping all this away, they uncovered the original wooden ceiling joists from 1881. In the midnight hour, a friendly neighbor with a sawmill showed up and furnished them with the 5,000 square feet of pine flooring needed for the reception area and the dining room, imploring Picco to “pay me when you get rich.”

“We are working really hard to preserve a lot of the traditional elements, but also put our personality into the space and draw a younger crowd,” Picco says. The proprietors collaborated with ecological design studio Nocturnal Medicine to revive and modernize the rooms with a clean, fresh vibe, which includes accents of whimsical art and found natural objects from the property. 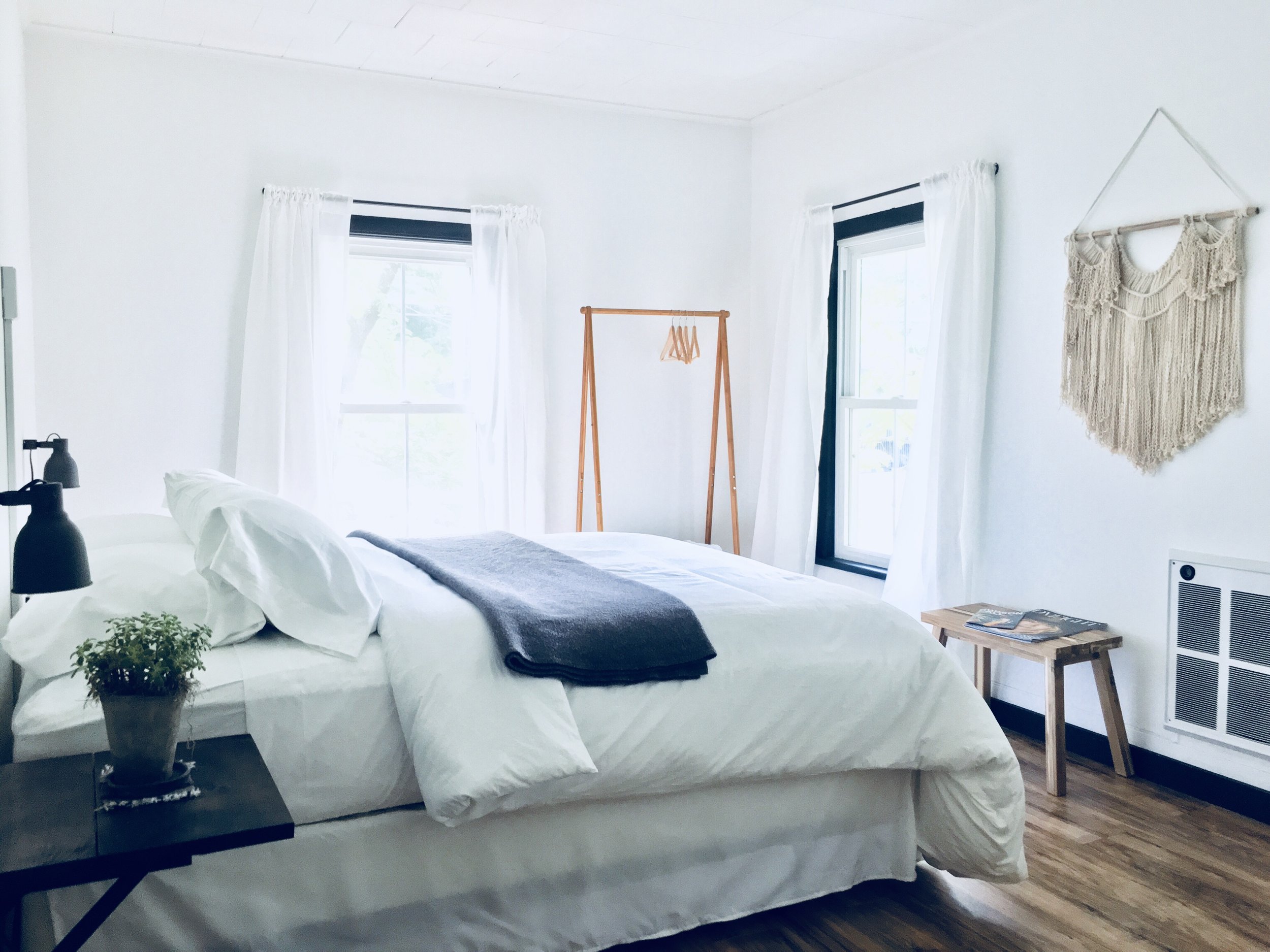 “I’ve been flying by the seat of my pants with entire thing,” Picco admits. “It’s been a really wild ride from signing the contract with no money in my pocket to, within 40 days, coming up with the money and closing.” Eight days after closing, Glen Falls opened for summer 2017 with a full season of reservations on the books.

The property’s original horse barn, across the street from the Main House was long ago turned into a no-frills Catskills tavern—linoleum floors, wood-panelled walls studded with beer advertisements, a pool table. “We’re not going to change the vibe in the tavern,” Picco says, “This whole floor should be covered in peanut shells and cigarette butts.” 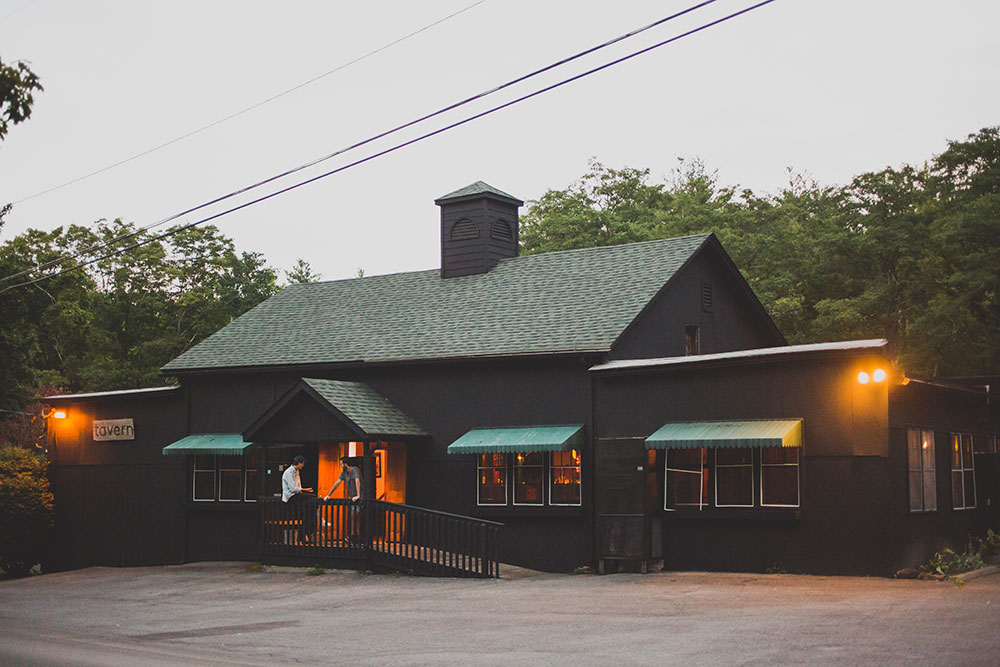 The Glen Falls staff is a mix of creatives—visual artists, musicians, performers of all stripes, giving a definite artistic undertone to the resort’s vibe. In summer 2017, the tavern hosted a 16-concert, blues-heavy music series, ranging from Paul Collins of The Nerves to Bloodshot Bill. Twelve of the shows were recorded (the inaugural Glen Falls mixtape is forthcoming).

Behind the tavern, a lush lawn is decked out with badminton net and a fire pit, where guests gather and roast s’mores nightly. Adjacent, the pool is a major attraction in summer (and a requirement for any self-respecting resort). As part of their effort to connect with the local community, Glen Falls’ pool (along with the tavern and the restaurant) is open to the public. “We’re really trying to invite everybody in,” Picco says. “Old guests may beg to differ, but I don’t think anything we’re doing is exclusive.” Just to sweeten the deal, a renovated camper will soon become the pool bar. “It’s going to be a fun tiki bar scene,” Picco says. 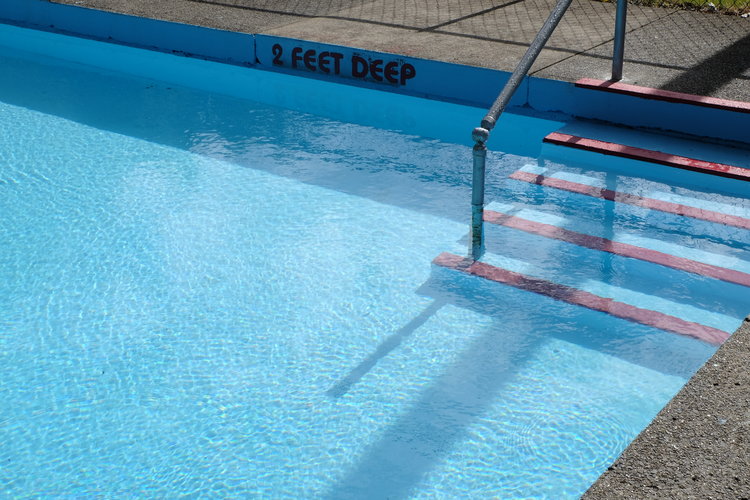 Literally a glen, the property is in a small valley circumscribed by water. The pool-and-tavern side of the street are hugged by the Kiskatom Brook, while the Main House side is bordered by a small spring-fed tributary. Glen Falls House encompasses nearly 50 acres of magical, FernGully-esque woodlands, including two national landmark waterfalls—the namesake falls and Icebox Falls. (In a bygone era, the falls were a valuable source of ice, which was floated down river to the New York harbor and shipped worldwide.) Swimming, hiking, biking, and sylvan frolicking are strongly encouraged. 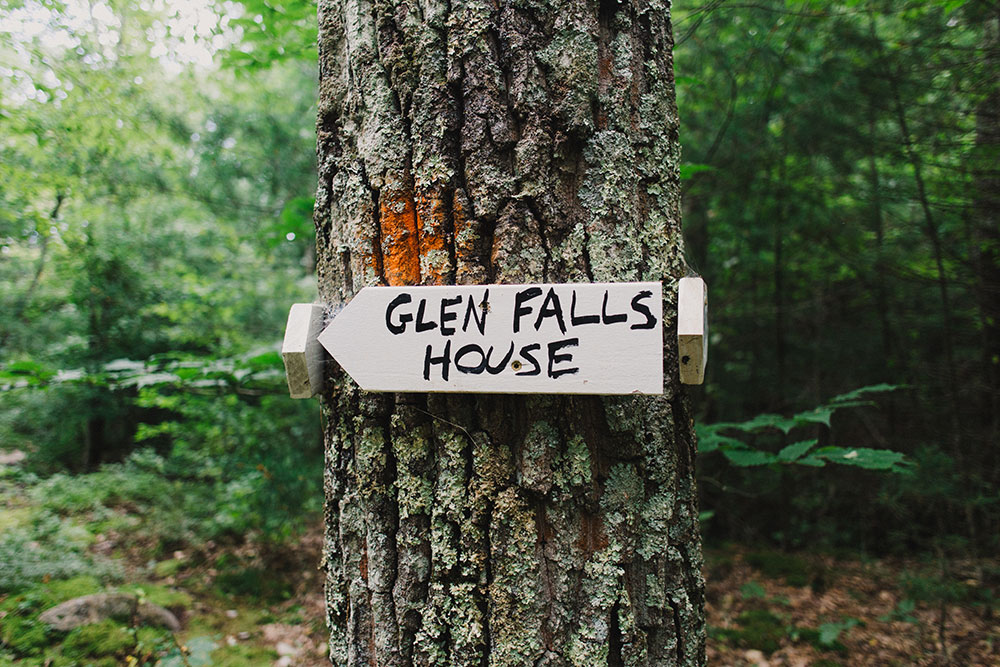 The forest, which is prime picking for foragers and mushroom hunters alike, is laced by miles of trails that are all maintained by the Round Top Mountain Biking Association. “The trails connect six area resorts,” Picco says. “It’s such a huge expanse of acreage that no one would be able to maintain it otherwise, so it’s a very helpful service to resort- and property-owners.” Soon Glen Falls House will have mountain bikes for guests and public rental.

“It’s not really about the luxury of a hotel room. We removed all the televisions,” Picco says. “It’s more about connecting with each other, being out in the woods, going on a hike, jumping in a freezing cold waterfall.” 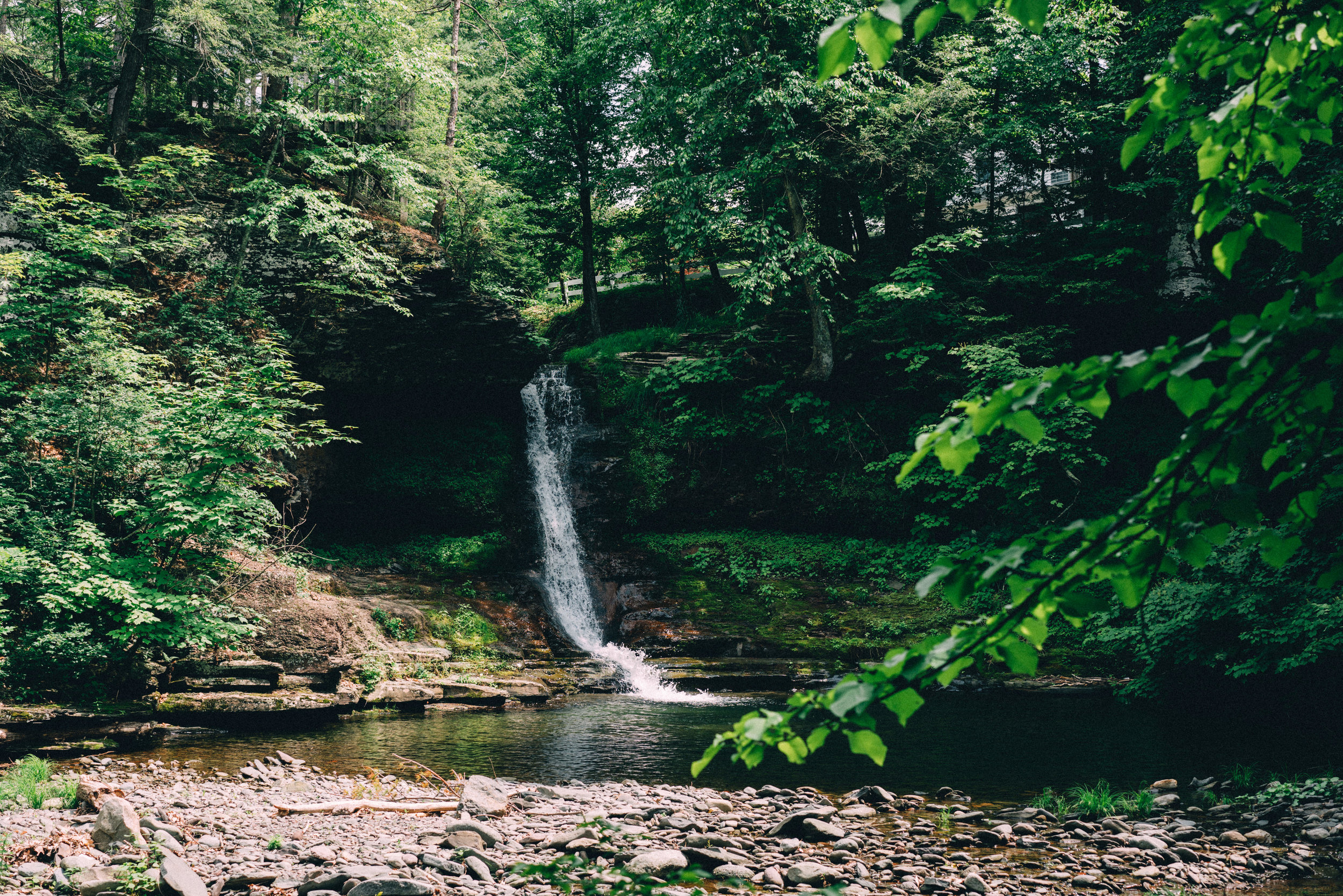 For some, the emphasis on nature will be off-putting, but for others it makes Glen Falls House a paradise. Given the edenic grounds and the abundance of lodging, this resort is also a prime wedding destination. “We’ve already sold three wedding weekend packages for next year,” Picco says. The highest tier is a full property buyout for two to four days, including a tent rental. The venue is ideal for larger parties: 150- to 300-person events. “We plan on having a lot of different group events throughout the wedding weekends—hikes, workshops, painting classes,” Picco says. “One of my friends is getting married here next year, and one of the events is live nude painting down by the waterfall, so really wacky things like that.” 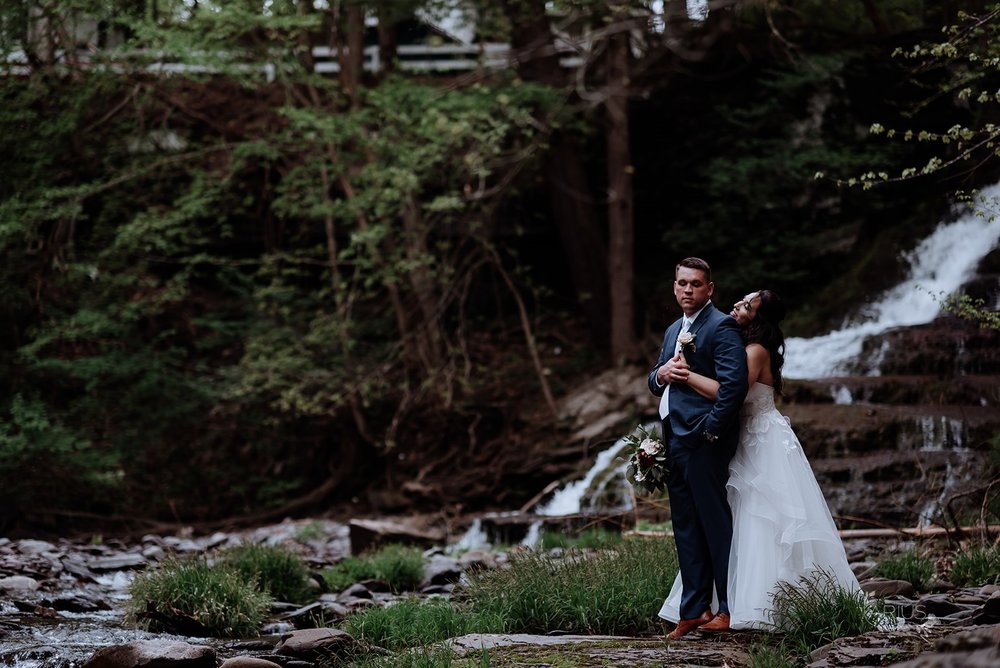 At capacity, Glen Falls House can sleep 110 guests, and more in tent camping, which is coming soon. “The overflow to resorts around us benefits the whole community. There are plenty of beds in the neighborhood for people to stay,” Picco says.

This is the first year Glen Falls House will be open year-round. One hundred miles north of New York, and 30 minutes from both Hunter and Windham Mountains, the summer resort is primed to make the transition to ski lodge. “That’s a new season for us, so we really need to establish ourselves as a winter destination,” Picco says. 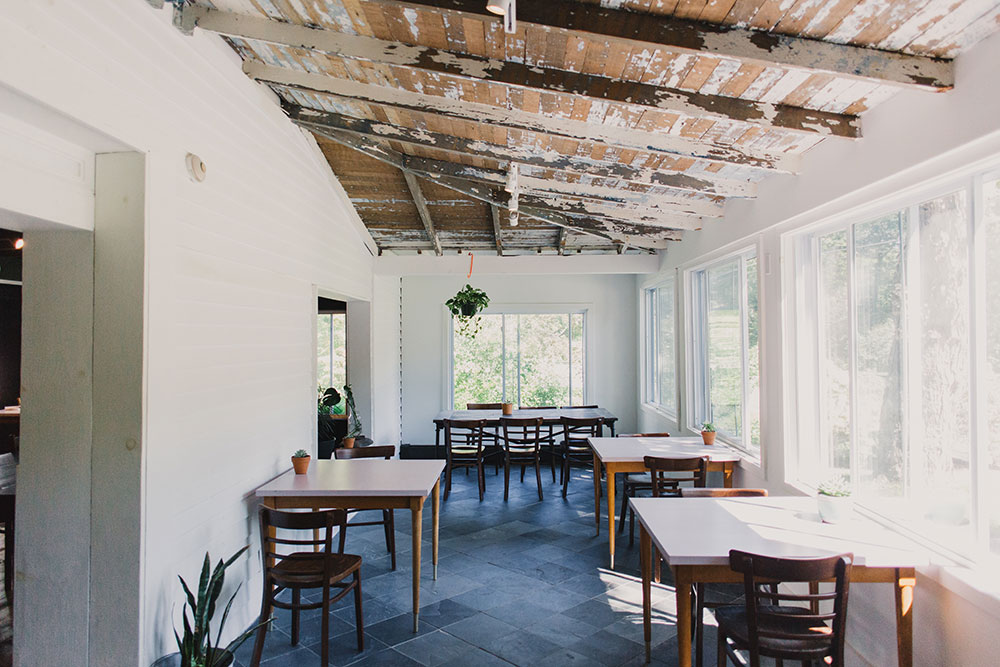 Before winter, a wood stove will be added to the sunroom to contribute to the cozy ski lodge vibes. Photo by Noni Brueckner

A huge part of this effort is directed at the restaurant, which has new life under head chef Chrissy Michaels. The locally sourced menu includes adventurous twists on classic dishes like the Peaches & Green, a tangy dish with kale, honey-glazed peaches, spiced almonds, and Lime Kiln goat feta ($12), or the Chicken Sandwich, a buttermilk-fried, pasture-raised chicken thigh with slaw, pickled peppers, and house-made American cheese ($14). The restaurant is open to the public, and includes two mains under $15. There will also be a weekly family-style Blue Plate Special, featuring favorites like meatloaf. “The food and where it’s sourced is really important to us,” Picco says. “We’re really proud of this program.”

JD Eiseman, who came over from nearby Scribner’s Lodge, is running the daytime menu with lighter breakfast and lunch fare like the Salmon Toast ($12) and the Mezze Plate, with hummus, cucumber tomato salad, olive tapenade, and toasted pita ($12). 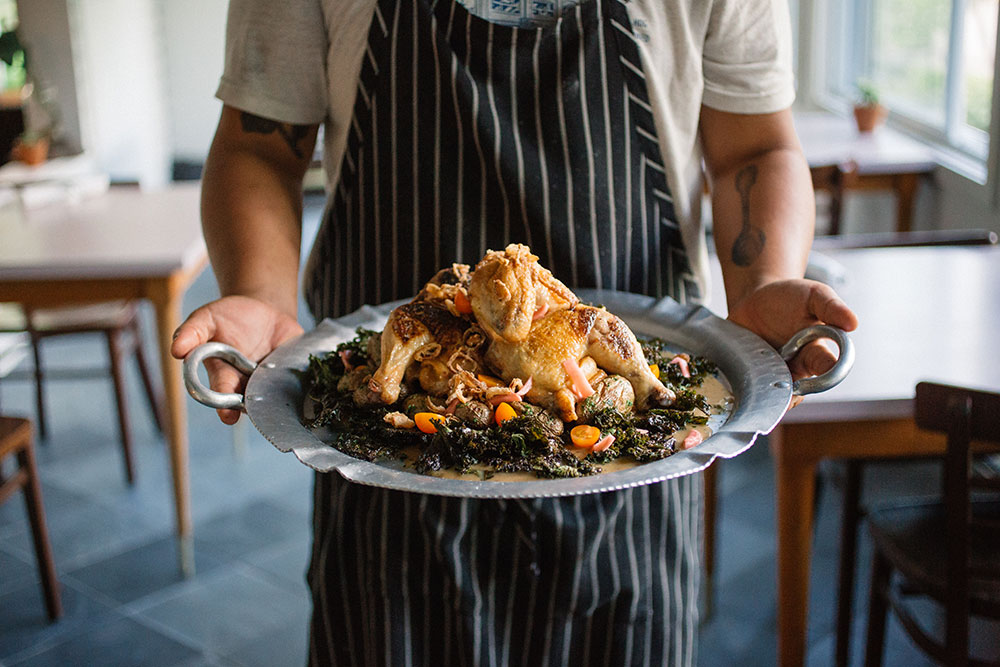 Eiseman is just one of several new hires, which also include the general manager, Ryan Kresser, who previously ran a boutique hotel in rural Nicaragua. “I am really, really excited to have Ryan here,” Picco says. “He just naturally fills the role. And we have a lot to do—I can’t keep it all in my head, but I finally feel like I have a teammate in the daily grind.” The two live onsite in staff accommodations, along with three other team members.

And Picco’s co-owner, Brier, is up from the city three to four days a week to help manage operations. Brier will be onsite this coming Labor Day weekend for a Fixed NYC-The Good Room-Glen Falls House co-sponsored holiday weekend pool party and music extravaganza. “It’s all our friends DJ’ing,” Picco says. “Over 400 people have already RSVPd. We’re out of rooms, but people are welcome to join for the day.”

While the resort only opened for their second summer season on July 2, it’s off to the races. A swirling vortex of possibility, under its new owners the Glen Falls house offers a saturated sensory experience. Just as likely to be the site of someone’s a back-to-nature baptism as a raging midnight party, the resort blends genuine hospitality, an unapologetic love of fun, and a reverence for the natural world.

“People hold this property close, and we take that very seriously,” says Brier. “I always say, ‘If you want to shop and vacation, go to the Hamptons; to really live, come to the Catskills.’” 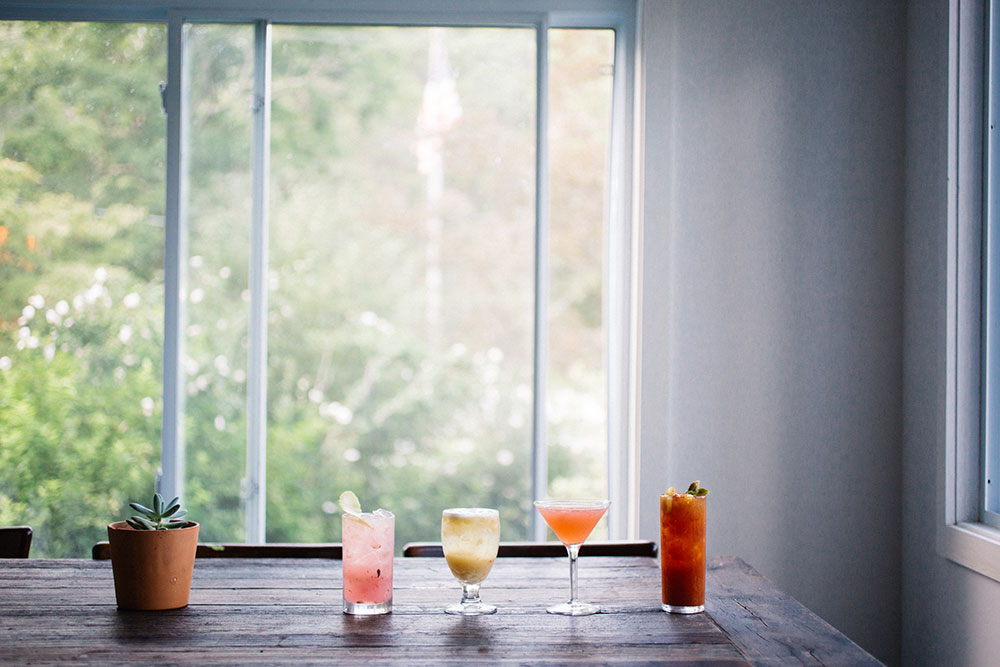