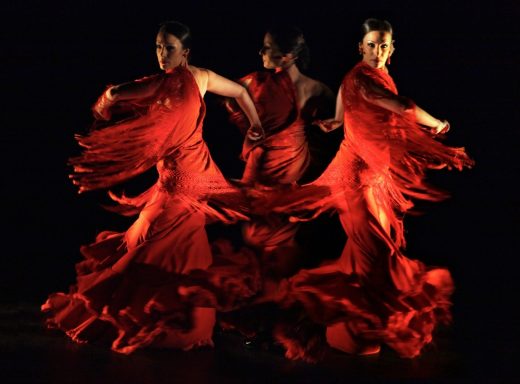 We were recently treated to a full performance by Flamenco Vivo Carlota Santana followed by wine, a tapas supper, and classical guitar by David Temple in “an impromptu ‘juerga’ atmosphere with flamenco surprises” at Kaatsbaan International Dance Center in Tivoli, NY. Flamenco Vivo Carlota Santana is a premier flamenco and Spanish dance company based in New York City now in its 32nd season. Incredible and fun – the Spanish word ‘juerga’ does apply!

Flamenco, derived from the Arabic word “fela-mengu” meaning “fugitive peasant,” has its roots in southern Spain where it became popular in the 18th century. The gypsies who settled in Spain came from India, and brought with them the culture of their homeland as well the influences they picked up during their travels west from Arab, Jewish and Andalusian cultures.

Between 1850 and 1920, cabarets called Café Cantantes were popular gathering places for audiences of various social classes and cultures in Spain. It was a mix of upper-class as well as gypsy sharecroppers and herdsmen still in their work clothes who would come to relax after day’s work. They gathered to drink sherry, socialize, listen to guitar music, and watch Spanish dance. This period of time is now referred to as flamenco’s Golden Age.

As the audience for flamenco expanded outside the gypsy population, artists began to perform publicity and to turn the folk dance into an art form accepted into mainstream culture. The Café Cantantes drew foreigners and tourists who came to Spain for its raw expression of emotion and its romance and color.

Kaatsbaan, Dutch for “a playing field,” was founded by professional dancers in 1990 and is an international dance center dedicated to the growth, advancement and preservation of professional dance. It was designed to provide national and international dance companies, choreographers and all dance artists with an affordable year-round facility where they can interact as a diverse community, experiment, create, rehearse, perform, showcase new work, train, and develop new sets, costumes and productions. Now in its 25th year, Kaatsbaan International Dance Center, located on 153 acres in Tivoli, NY, has state of the art studios and offers residency programs for dancers from around he world.

We are fortunate to be able to experience some of the incredible talent that frequents the Center. Kaatsbaan offers a series of premier, preview, and showcase performances of many different genres in a 160-seat black-box theater with a Metropolitan Opera size stage during spring and fall seasons. Check it out!