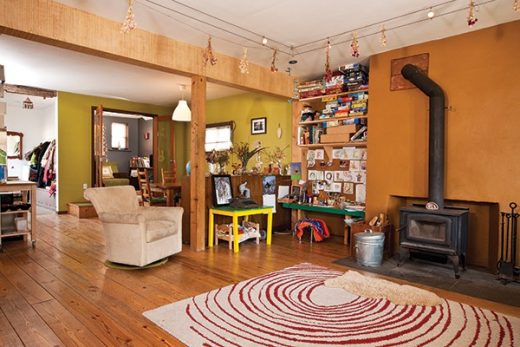 If, on recent travels through Kingston, you heard a choir singing, it wasn’t your imagination. If you heard a dessert-inspired hard rock anthem or a melody asking “Have you never been yellow?” you weren’t dreaming. It was coming from the Rondout, where musicians Morgan Taylor and Rachel Loshak have made a home just as colorful and eclectic as their art.

Reimagination is key here. A simple 1851 post-and-beam farmhouse was reimagined into an innovative, modern space. Classic 1970s rock and easy listening hits are continually reimagined into the musical saga of an alien (from the sun) relocated to Minnesota. A singer-songwriter is reimagining herself as a teacher. Two musicians are reimagining childhood and life.

Gustafer Yellowgold, the aforementioned sun-alien and Taylor’s alter-ego, is the star of albums and DVDs growing in popularity here on Earth. So much so that his latest work,Dark Pie Concerns, was nominated for a 2016 Grammy in the children’s album category. Loshak, for a decade the manager of Gustafer Yellowgold, is better known for her melodious soprano and complex bass playing on albums So Bright,Mint, and Colors. She performs regularly at the Rail Trail Cafe in Rosendale and the Kingston Night Market. 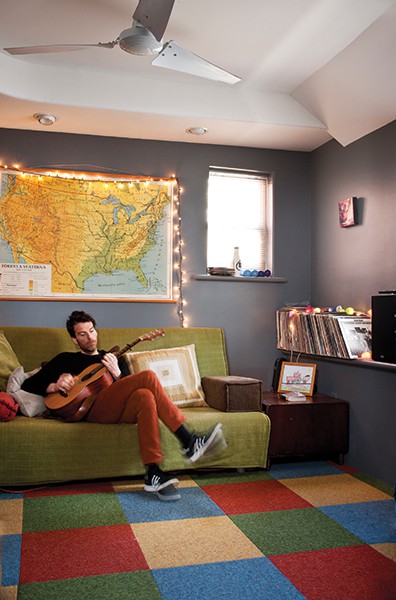 The house—slate blue with orange trim, stone walls and steps, requisite covered porch, “dog house” dormer windows—sits on a hill overlooking a quiet neighborhood of mulberry trees and mixed 19th-century brick and wood homes. It’s a place for children to grow—where they can run back and forth between neighbors’ houses or to the nearby parks. Just the kind of grounded, peaceful place the couple set out to find when a quest for “a little bit of land with some trees” originally brought them to the Hudson Valley. They just never expected to find it in Kingston.

Backup to 2009 (and remember that verb): The couple, plus one child, were Brooklyn-based but constantly touring. Travel and city life had them longing for something “nature-centric.” Loshak grew up on her family’s apple farm in England, where she could “walk out the door and pull an apple off a tree”; Taylor is from the suburbs of Ohio. (“There was a lot of lying in the grass and playing at the creek in the woods,” Taylor says.) Traveling through the area piqued their curiosity and they found a rental they liked in Kerhonkson on Craigslist. A few years, one more child, and another move later, they were ready to put down roots in the area and buy a home.

“We almost cancelled the appointment,” Taylor says. “We were like,’Kingston—really?'” Upon entering the house, however, they found themselves immediately squeezing each other’s hands. The interior—a whimsical blend of color and materials—had been artfully and intelligently redesigned by the previous owners, builder Brian Early (who also designed the restaurants Elephant and Boitson’s) and artist Anne Surprenant. Details—such as the vertical ceiling beams rebuilt from stacked slices of wood, recessed walls outfitted as firewood racks, and an upstairs hallway stripped down to its bare slatted frame to reveal the pipes behind—appealed to Loshak and Taylor’s creative sensibilities. Walls painted shades of brown, green and blue by Suprenant gracefully complemented each other. To them, the house itself was a work of art. “We had to give up our fantasy forest,” says Taylor, but they knew they’d come home. 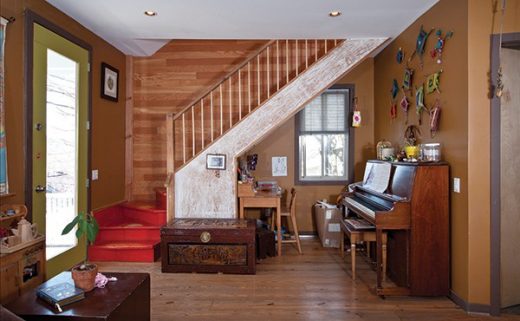 The family has since inhabited the house-cum-artwork completely. The large ground floor, which encompasses an open-plan living, dining and kitchen area, is decorated with their collections of Swedish maps and diagrams (from Loshak’s Uppsala-based brother) and handmade God’s-eye weavings. Work spaces for their sons Harvey and Ridley have been carved out of nooks in the living room. A dining table is as much the base for jigsaw puzzles and art projects as it is meals. 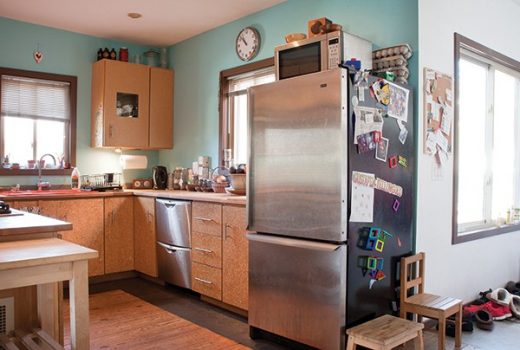 The kitchen has two dishwashers, ample cabinet space, and a pantry. – DEBORAH DEGRAFFENREID

The kitchen includes a large pantry, butcher block counters, and abundant wired-glass-and-particleboard cabinets. Two small double-stacked dishwashers sit alongside a bright orange sink. Zoned radiant heat under wide-planked wood floors, and a small woodstove, keep the house toasty, and a humidifier, built into the side of a kitchen cabinet, adds an ingenious touch of convenience. Next to the kitchen, one of the home’s original beams hangs at the entrance of a long, sunny mudroom. Outside, a block-long backyard with concrete garden plots utilizes converted tree stumps as seating.

Behind the dining area, a den with a high plaster ceiling and a colorful blocked carpet (Taylor calls it “the hang-out room”) displays an entire wall of vinyl records. Mostly Taylor’s, the collection includes classic rock and many of the K-Tel compilation albums that used to scroll down late night TV screens. A black slate tile bathroom includes a showerhead angled artfully over a corner of graded floor, foregoing the need for door or curtain.

Leading upstairs, a red wooden staircase, worn down at the center of each step, suggests generations of family foot traffic. (“They remind me,” Taylor says, “of somebody’s lifelong guitar—like Eric Clapton’s Stratocaster, which is just worn away; or Willie Nelson’s—it has a hole in from where he’s strummed it for 50 years.”) Three bedrooms and another bathroom, with oversized tub and polished concrete surfaces, make up the second floor. A third floor attic converted to guest space has brought the family business full circle: Fellow musicians recording at Dean Jones’ No Parking Studios in Rosendale will often stay overnight. Loshak welcomes the opportunity to finally play host. “We made so many friends touring. So many people put us up all over the country. I love when people come to visit—it gives us the chance to continue being part of that wider community.” 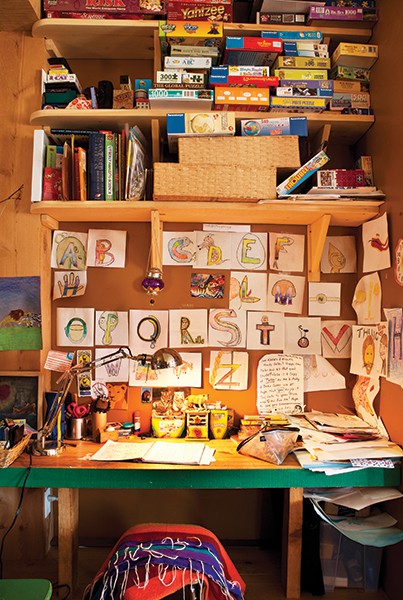 Where Work Is Child’s Play

A modern addition to the back of the house, split into two studios, provides the couple with ample workspace.

Upstairs, with floor-to-ceiling windows that flood the room within light and frame views of Port Ewen, is Loshak’s studio. Family heirlooms—her grandfather’s piano and a desk built from his handcrafted mahogany cabinetry—are interspersed with a library of classics and Rudolf Steiner’s philosophy. For Loshak, the shift in address has coincided with a larger shift of purpose. Next fall, she’ll begin teaching first grade at the Mountain Laurel School in New Paltz. She looks forward to the new role and says studying Steiner’s works has helped her approach music, and life, holistically. Along with writing and performing her own music (against one wall sits the red couch where she films her intimate “couch concerts”that she posts on her website), Loshak gives voice lessons and leads three choirs.

Downstairs, Taylor’s studio is lined with early Gustafer sketches and posters of his creative idols—the band KISS. It’s where Taylor composes and does the artwork for his series and where he’s building on the success afforded by the Grammy nomination. One small issue: The Ethan Allen bus terminal is close enough to break his reverie. “The only thing I didn’t take into account was that I sometimes have to wait to do a vocal take for—” Taylor breaks into a rhythmic, staccato whistle, the exact pitch and tempo of a bus backing up. It’s the kind of impersonation—dead-on, loud, and slightly manic—that not just children love.

The upright piano came with the house—a good omen for a family of musicians.

“I might one day have to work it in,” he admits. Then he quickly adds, “But I’m NOT recording ‘Wheels on the bus.'”

Rachel Loshak’s children’s choir is performing at the Mountaintop School Music and Merriment Festival on May 7. She will be performing at the Rail Trail Cafe in Rosendale on June 19 and July 31. For more information: Rachelloshak.com; Gustaferyellowgold.com. 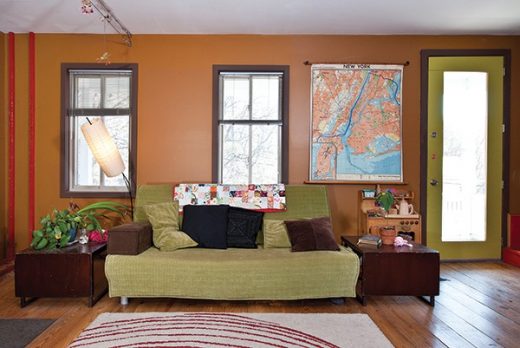 The interior walls are painted in complementing hues. – DEBORAH DEGRAFFENREID 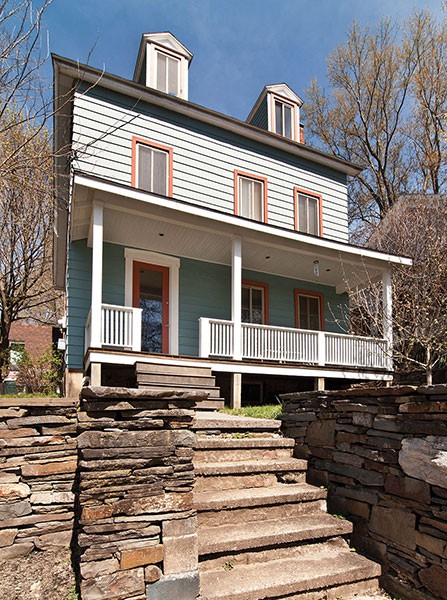 Front view of the home in the Rondout section of Kingston – Deborah DeGraffenreid. 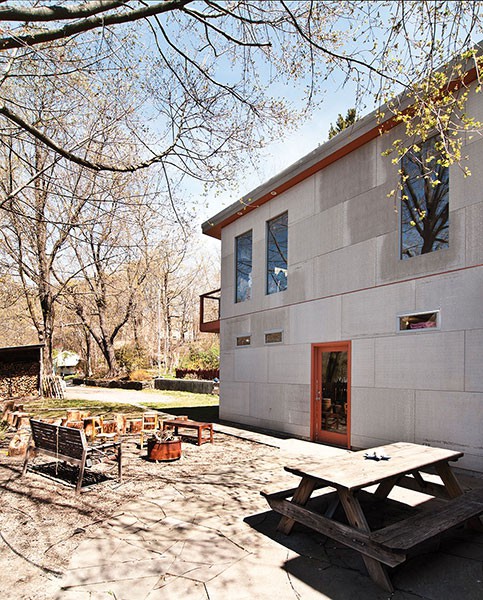 View from the back of the home – Deborah DeGraffenreid. 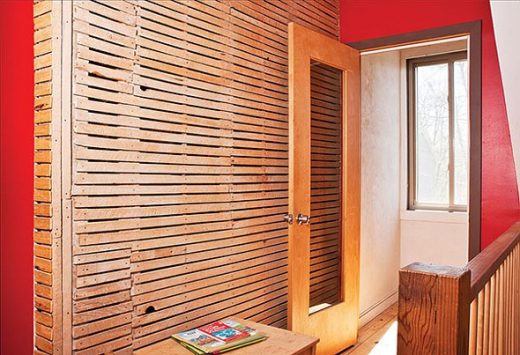