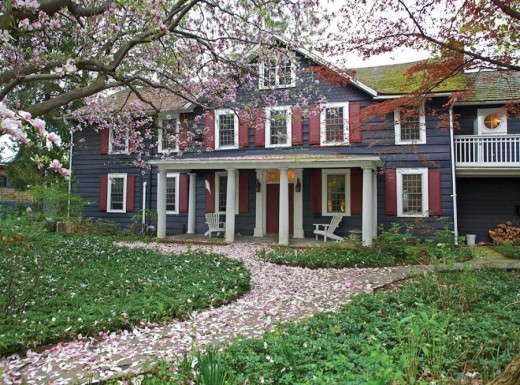 [Editor’s Note: This piece was originally published in the Upstate House Spring 2014 issue. It’s been reposted here with the author’s permission…my permission! I wrote it! Since we’re offering a free $500 spa package at Buttermilk Falls {which, sadly, I cannot participate in! But you should! Their spa is amazing}, I’m revisiting my incredibly relaxing overnight trip to Buttermilk Falls last year. So how do you win this spa package? Simple: Vote for your Dream Home on Upstater, and you’ll be entered to win. Polls open through February 17 and winner announced February 20. Well? What are you waiting for? Go do it now! Okay, read this first, then go do it now!]

Buttermilk Falls’ aesthetic is all about comfort: comfort food, comfy beds, and comforting and calming spa experiences. And yet the inn and its surrounding 75 acres sit just beyond the Route 9W commercial zone in the Ulster County hamlet of Milton: an oasis that appears among truck graveyards and auto shops. The property consists of a farm-to-table restaurant, Henry’s; four guest cottages; four guesthouses; an organic garden; an animal sanctuary (llamas, alpacas, goats, miniature donkeys, chickens, ducks, and a bee colony); and a modern spa. But the heart of the property is the circa-1764 Anning Smith house, a 10-room Colonial farmhouse enveloped by shade trees, where the art of comfort is perfected. This is thanks to its owner, Robert Pollock, a real estate developer who splits his time between his house on the inn’s property and a place in New York with his wife and two children.

Although the Smith House harkens back to its Revolutionary War-era roots, Pollock chose a mix of design elements to update the look of the inn while respecting its history. “It’s Revolutionary meets modern,” says Pollock. Greek Revival-style pillars frame the front door of the Smith House while the exterior of Henry’s is Arts and Crafts inspired. The guesthouses, cottages, and spa are more contemporary, with simpler lines and large windows that let in light. Inside Smith House, each room is decorated with an eclectic mix of antique furniture rubbing elbows with flea market finds and unusual curios, like funky lamps and old trunks. The sitting room is the heart of the house, where a fire crackles in the brick fireplace and walls are filled with shelves devoted to antique books and figurines.

Many of the original features of Smith House are meticulously restored, like the hand-hewn ceiling beams, original stonework, and wide-plank floors. There’s even a spot on the wall that has been stripped down to its support system of old wood and stone, giving guests an opportunity to look at just exactly how the house was put together back in the old days. The gift shop, located downstairs, has its original stone floors and beamed walls intact, nearly untouched since the mid-1700s. 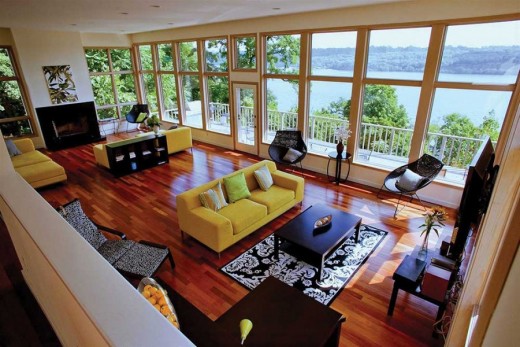 The house is not a period piece, and it couldn’t be, since parts of it have radically changed over the years. “The Smith family was here, they made additions, and they had fires, and made more additions,” explains Pollock. All of Smith House’s design elements are meant to complement, not re-create, the house’s historical character. The old-fashioned gas lamp-style fixtures in the inn’s breakfast room are fitted with retro Edison bulbs, but there are flip-switch fireplaces and Jacuzzi tubs in most rooms. All of it adds up to the feeling of an old-fashioned getaway. Many groundfloor rooms offer garden access via French doors that open onto stone patios complete with outdoor seating areas. The inn’s general manager, C. J. Hartwell, describes it as having a “modern country feeling.”

The inn’s operators have embraced two things that appeal to Hudson Valley dwellers and visitors: environmentalism and luxury. “We try to do the right thing in the world by supporting eco-friendly, sustainable culture with our purchases,” says Hartwell, referring to their use of food grown in their own organic garden and sourcing of local products. “At the same time, we try to bring the amenities and the luxuries that people want.” That means Jacuzzi tubs in the guest rooms and a well-appointed spa facility, too.

Perhaps comfort is most important because Pollock intended the property, with its rolling acres and its roaring waterfall, to be his own private getaway. However, plans changed when he learned that the property opposite his was on the market. “The idea was for me to build a house on the waterfall, live happily ever after, and not worry about neighbors,” says Pollock. While in the process of purchasing his land, he heard that the plot directly opposite the falls was on the market. Pollock took out his checkbook and bought the other property, sight unseen. Turns out, the land also included a dilapidated 18th-century Colonial with the roof caved in known as the Anning Smith House.