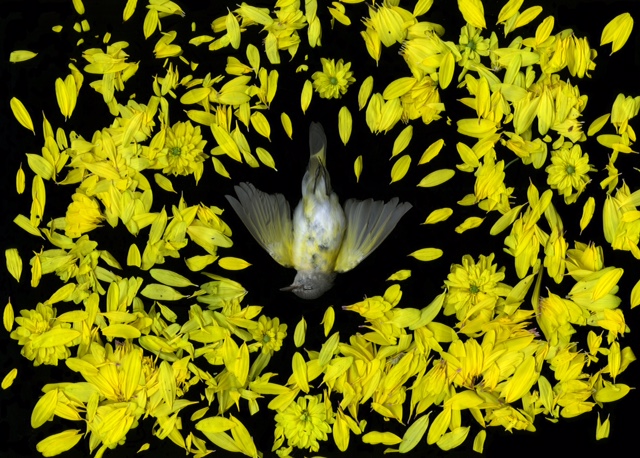 Yellow Warbler by Portia Munson. Just one of the pieces of Contemporary Art to be showcased by the Cross Contemporary Gallery for Holiday Design House

In my last article I mentioned I am celebrating my one-year anniversary with Upstater. What a marvelous journey the last year has been. From weight loss, to the growing real estate buzz in Kingston, to my Big Gay Wedding, to home renovations, we have certainly traveled a road together in the last twelve months. A rather delightful journey for everyone I hope. Several prevailing themes have reoccurred throughout these features: the history of the region, the limitless availability of architectural gems in the real estate market, the outstanding design resources which are currently transforming the area and the availability of high quality art in every medium. Through these articles I have introduced friends, showcased homes and promoted the growing buzz which now surrounds Kingston. Having always recognized anniversaries as milestone events requiring celebration, I debated how best to celebrate my Upstater Anniversary. What one event would be the perfect way to celebrate the last year? A party, a gallery event, a design showcase or conceptualizing a tour of the region, what was the best project to mark this anniversary? Well versed in hosting each of these types of events, the debate centered upon which project would best underscore the merits of design, architecture, real estate and community which I have written of in the last year. In other words, how could I take Upstater from written format to a LIVE visual experience? A visual experience conceived to complement all that is Upstater, or a least my presented version of Upstater. After careful deliberation and counsel I concluded a Holiday Design Show House would be the perfect outlet of celebration. A Show House which brought my written words to life (I know, a rather scary premise). 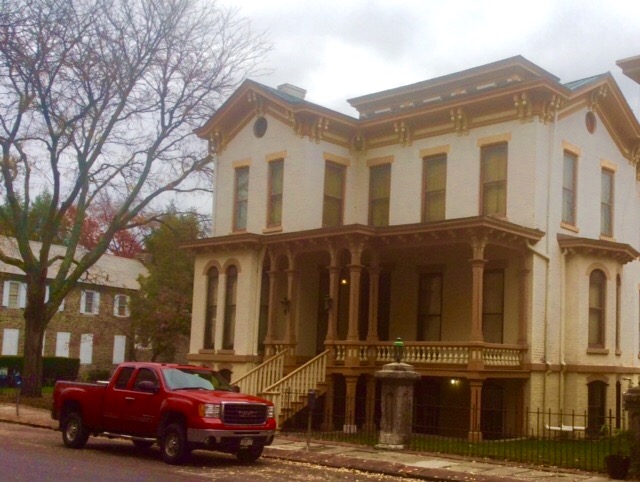 The circa 1872 Loughran House was designed but architect J. A. Wood in the Italianate Victorian Style

Towards these means, I looked to identify a property of interesting character whose history was as engaging as its architectural style and detailing. Almost as if it was destiny the circa 1873 Loughran House on the grounds of the State Senate House Museum became available. The Loughran House, which was purchased by the New York State Historic Trust in 1968, was built by noted architect J. A. Wood. Fashioned in the Victorian Italiante style, the house which was erected for Kingston Surgeon Dr Robert Loughran is a cornucopia of exterior and interior architectural detailing. The interior rooms feature a commanding entrance gallery with a spiraling hand carved mahogany staircase. The formal living room’s towering window bays are complimented with authentic gilded wooden window cornices. In the library a slate mantel and intricately detailed woodwork predominate, and in the dining room the piece-de-resistance are the curved doors throughout the room. Remarkably, all four first floor rooms are accentuated by unaltered plaster ceiling medallions. In the truest sense, the Loughran House is a highly stylized Victorian Townhouse Manse. From 1932 until 1965, the Loughran House was converted into Conner’s Funeral Home. Perhaps this eerie happenstance explains why the house and its interior have remained in such pristine condition. 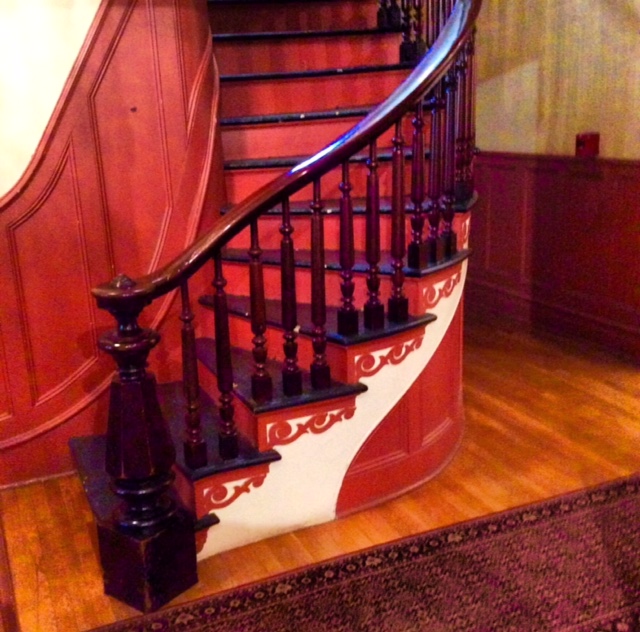 The spiraling hand carved mahogany stair bannister in the entrance gallery of the Loughran House.

Throughout the recent holiday seasons, the Friends of the Senate House—under the decorative leadership of Christine Hein—have opened the doors of the Loughran to thousands of visitors each December. Stepping away as co-chairman of the Uptown Kingston Business Association’s Annual Snowflake Festival, Holiday Design House seemed the perfect project. Since the Loughran House is a museum property, several caveats come into play with this particular endeavor. One: the cream and mauve interior wall and trim colors must remain. Two: all art works must be hung without damaging picture molding or antique plaster walls. Three: each of the four first floor rooms must be arranged in a manner that affords easy traffic flow. Four: the wheel of the famed Mary Powell Paddleboat, a mammoth wooden structure, must remain in residence. In fact the Wheel of the Mary Powell is itself a stunning 19th century work of Art. 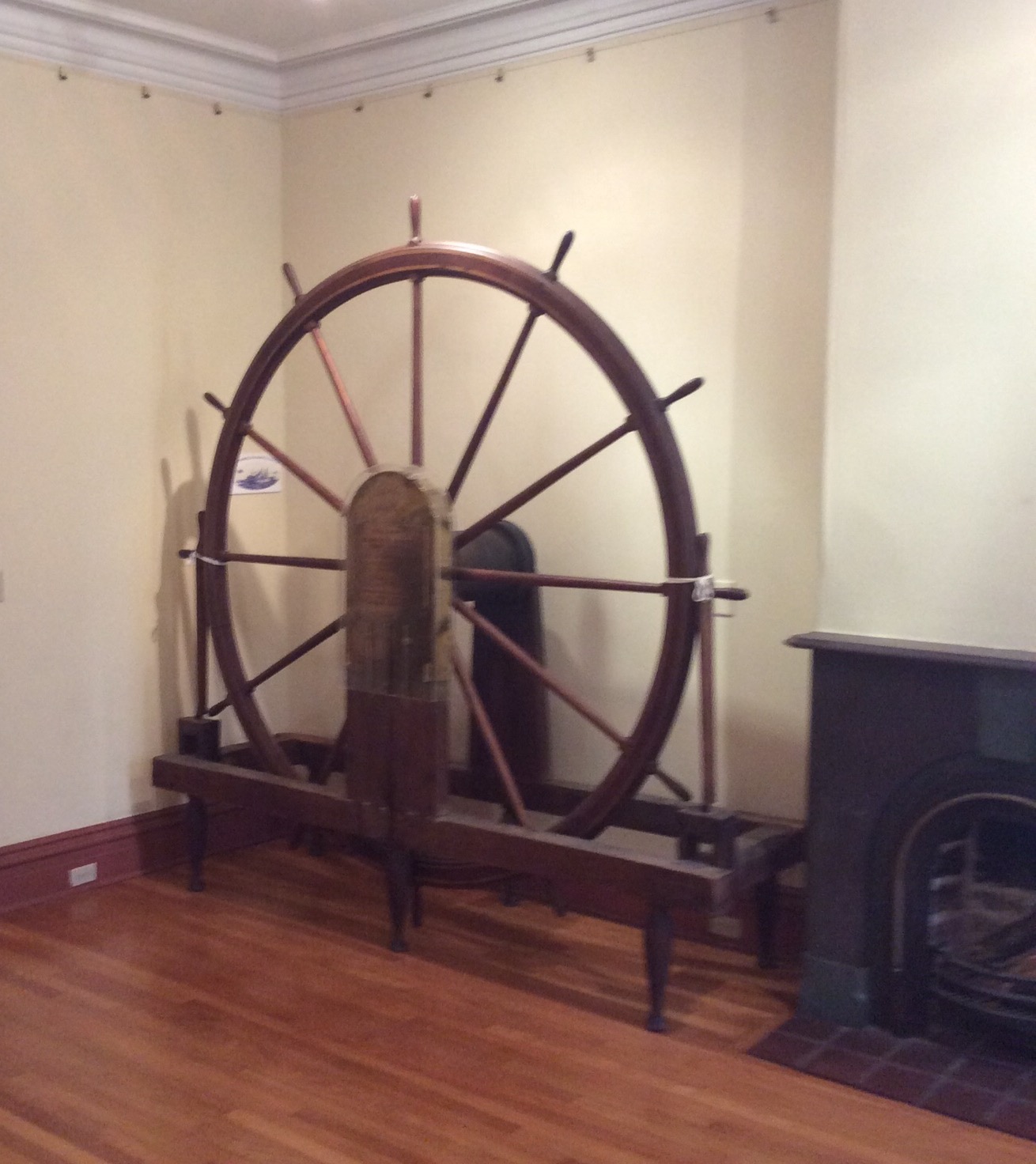 So now we have the anniversary celebration project, the historic site, and the architectural gem. For the design team I looked no further than the pages of the Chronogram and the Upstater Blog. In the gallery entrance hall, I have paired the floral design mastery of the Gilded Thistle with art from the Cross contemporary art Gallery in Saugerties, NY. As you my recall I have featured the work of the Gilded Thistle, and it’s owner Linda Hopfenspirger on numerous occasions. The Hopfenspirger’s stunning home in Stoneridge was my home features presentation in the June Issue of Chronogram (A Most Cherished Address). The Cross Gallery, under the leadership of Jenn Dragon, has garnered a stellar reputation for representing some of the regions most influential artists. Jenn, true to form, has hand selected fantastic works for the Entrance Hall Gallery Space. Featured artists include: Gregory Amenoff, Richard Bosman, Katherine Bowling, Susan Copich, Ford Crull, Catherine Howe and Portia Munson; all names easily recognizable in today’s contemporary art market. 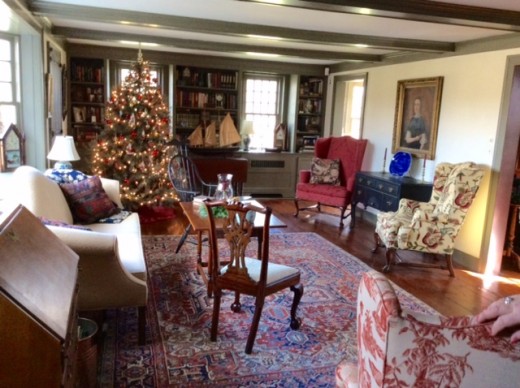 The floral mastery of the Gilded Thistle will be paired with Contemporary Art in the Entrance Gallery.

In the first of the homes many grand rooms I reached out to my friends Charles Farruggio and Michael Van Nort of FRED in High Falls, NY. Again, FRED, along with the design team of Farrugio and Van Nort, were featured on Upstater last Autumn (You’ve Got To Meet FRED). In the library, the always charming Rebekah Milne of Milne Inc, and Kingston’s Milne’s At Home Antiques has agreed to loan a collection of antique folk art and industrial furnishings from her Fabrication Factory. In June Rebekah’s amazing antiques gallery and the Fabrication Factory were highlighted on Upstater (Rarity,Modernity, And Antiquity Define a Brand…). The last remaining room was turned over to the whirling dervish design duo of John Krenek and Jamie Niblock of Spruce Design and Decor. One of my most popular articles, Practicing What They Preach, provided an inside glance of this dynamic couples gorgeous Hudson Valley home. Look out for my next article on Spruce’s newest location in Uptown Kingston, coming in the next two weeks. 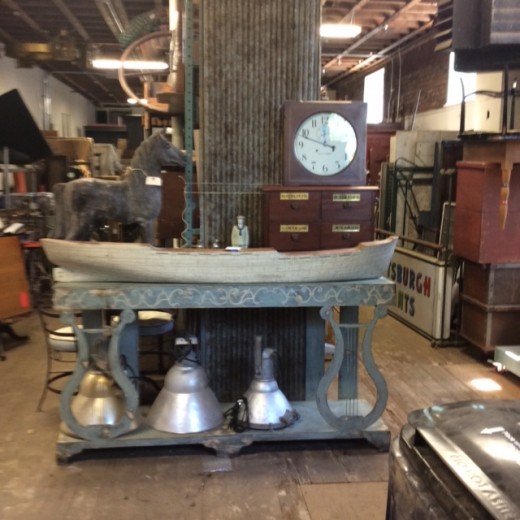 Rebekah Milne of Milne Inc(Milne’s At Home Antiques, the Fabrication Factory), will pair her collection of industrial pieces with folk art in the home’s former library.

To complete the circle of this anniversary celebration I also wanted to include a community aspect. Throughout my meandering writings of the last year I have continually underscored the prevailing sense of community in the Hudson Valley. To these means Holiday Design House at the Loughran House will debut on Friday December 4. Following an afternoon press tour, the Loughran House will officially open for the holiday season during the 2015 Snowflake Festival. During the season, the Loughran will also be the site of a tour to raise funds for a local charity which strives to improve daily life for a multitude of individuals. On Friday December 11th, Holiday House will be showcased during a Champagne Reception sponsored by The Friends of the Senate House. This Event with soulful jazz music by Blue Gardenia, will serve as a fundraiser for the Senate House Museum (admission $25 per person). Naturally, an anniversary celebratory event requires a PARTY! I certainly would fall short of my reputation if I did not host at least one great invitation only event for this project. On several occasions in the last year my friend Brigid Walsh has appeared on Upstater. As the Senior Executive Director for Events, Partnerships,and Communications At Vogue, Brigid was a no brainier selection as a co-host. This event on Sunday, December 13—hosted by the Designers and Upstater—is an opportunity to meet the design team and celebrate interior design in Kingston, NY. 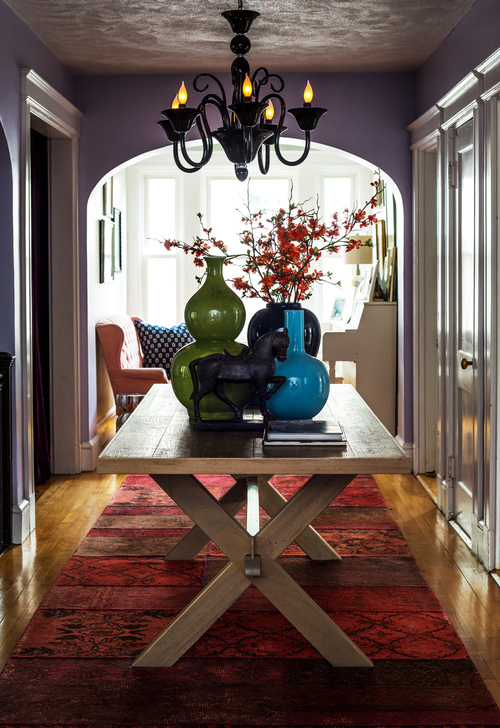 The Design Team of Michael Van Nort and Charles Farruggio of FRED will transform one of grandest rooms of Holiday Design House.

As years go I have to say 2015 has been a pivotal year for Kingston, Upstater and for me personally. Through porch conversations with Meira Blaustein, Harris Saiffer, Eric Bean and many others I have discussed the tranquil allure of Ulster County with a multitude of people. By showcasing the homes of my friends, Taylor and Elizabeth Thompson, Vickie St John Gilligan, John Zerbo and Tom and Linda Hoppenspirger I demonstrated how enthusiasm and determination can transform a property. Through parties, social gatherings, shopping trips, and a few commentaries on dining in the Hudson Valley I attempted to show just a flavor of the region. The Hudson Valley, though expansive, is a remarkable place littered with history and augmented by the nicest of individuals. Through the venues of Instagram, Facebook, Twitter, Goggle Plus, and Pinterest I have heard from many of you. It has also been a surprising pleasure the number of new friends I have met via writing for Upstater. I hope each of you will take the opportunity to Tour the Loughran House in December. 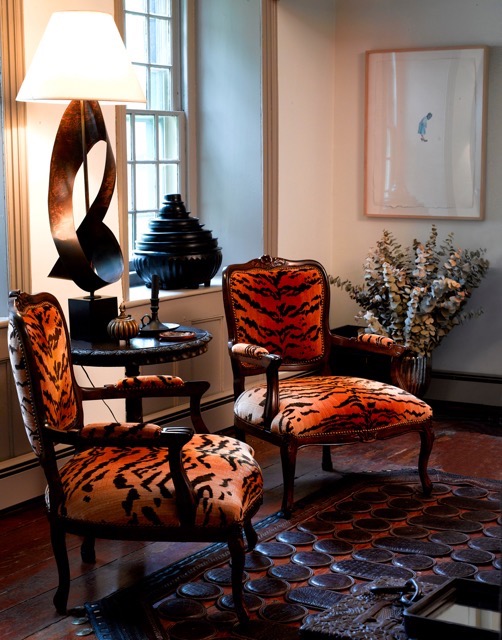 John Krenek and Jamie Niblock of Spruce Design and Decor will lend their mastery to the dining room’s design.