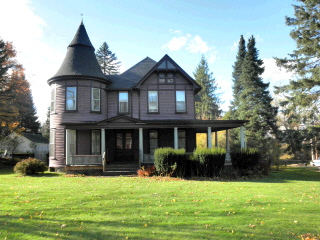 This Stamford Victorian was reduced to $149,000 post-Irene, but not because of the storm

I posed this question to a couple of real estate brokers from Delaware County, folks located in or near hard-hit Margaretville. And, you know, what are they gonna say? The market is dead, come on up and take your pick? No, of course not. One broker sent via email a completely pollyanna response (she’s never been more optimistic about the Catskills real estate market), and the other was more forthright on the phone about at least the temporary effect of Tropical Storm Irene in upstate New York: interest has slowed. But…

John Tufillaro at Coldwell Banker Timberland Properties told me that, indeed, he’s had fewer calls in the aftermath of Irene, and business is definitely down in what has historically been their busiest time of year, just before leaf-peeping season. Still…the calls are coming, folks are inquiring. While a few properties saw price reductions just after Irene, Tufillaro says they’re not storm-related. “[The owners] could just be motivated to sell now, ready to move on with their lives,” he says. Business will probably be slow for a while. Tufillaro admits that some towns — Roxbury, Middletown — aren’t looking their best. They’ve been flooded, some buildings are collapsed or condemned, streets are roped off. “People aren’t getting a clear sense of the communities right now,” he says, although they are getting a clear sense of how folks are coming together to help those communities.

And I hate to sound like a real estate predator here, but I do think this makes it an extra good time to check out Catskills real estate for sale. Already, the market was soft; now it’s at a (temporary) standstill. Even properties that were unaffected by Irene will still cause a little hesitation among some buyers, which means those of you who are more intrepid should probably get your rears in gear. After all, roads and homes may be damaged, but the stuff that matters is still there. As Tufillaro says, “The advantages of coming up here are the clean water, the clean air and the natural beauty…and they’re still gonna be coming up for that.”