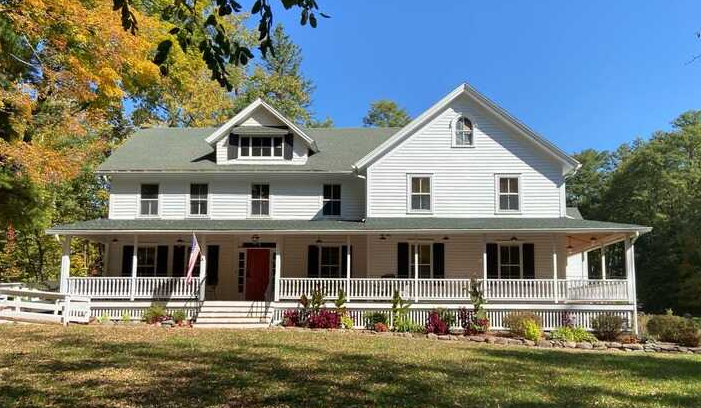 The Howland House in Mount Tremper has been a Catskills destination for New York City residents in various incarnations since it was built in the 1860s. After a meticulous, masterful renovation over the past three years, it reopened last month under the proprietorship of a couple who has honored the history of the place, reviving the name it held in 1920 and its original purpose as an inn.

Eva and William Clark first laid eyes on the building in May 2017. It was the Four Corners at the time, after serving up fine French cuisine as La Duchesse Anne since 1978. The couple was looking for an inn to fix up and operate after making the move from New York City.

William was a property manager in New York City overseeing 5,000 apartments in 200 buildings. Beyond that experience—and a love for old homes—he and Eva hadn’t had experience owning an inn. “We’re not coming from the hospitality industry,” Eva says. “This is truly a home-grown operation.” 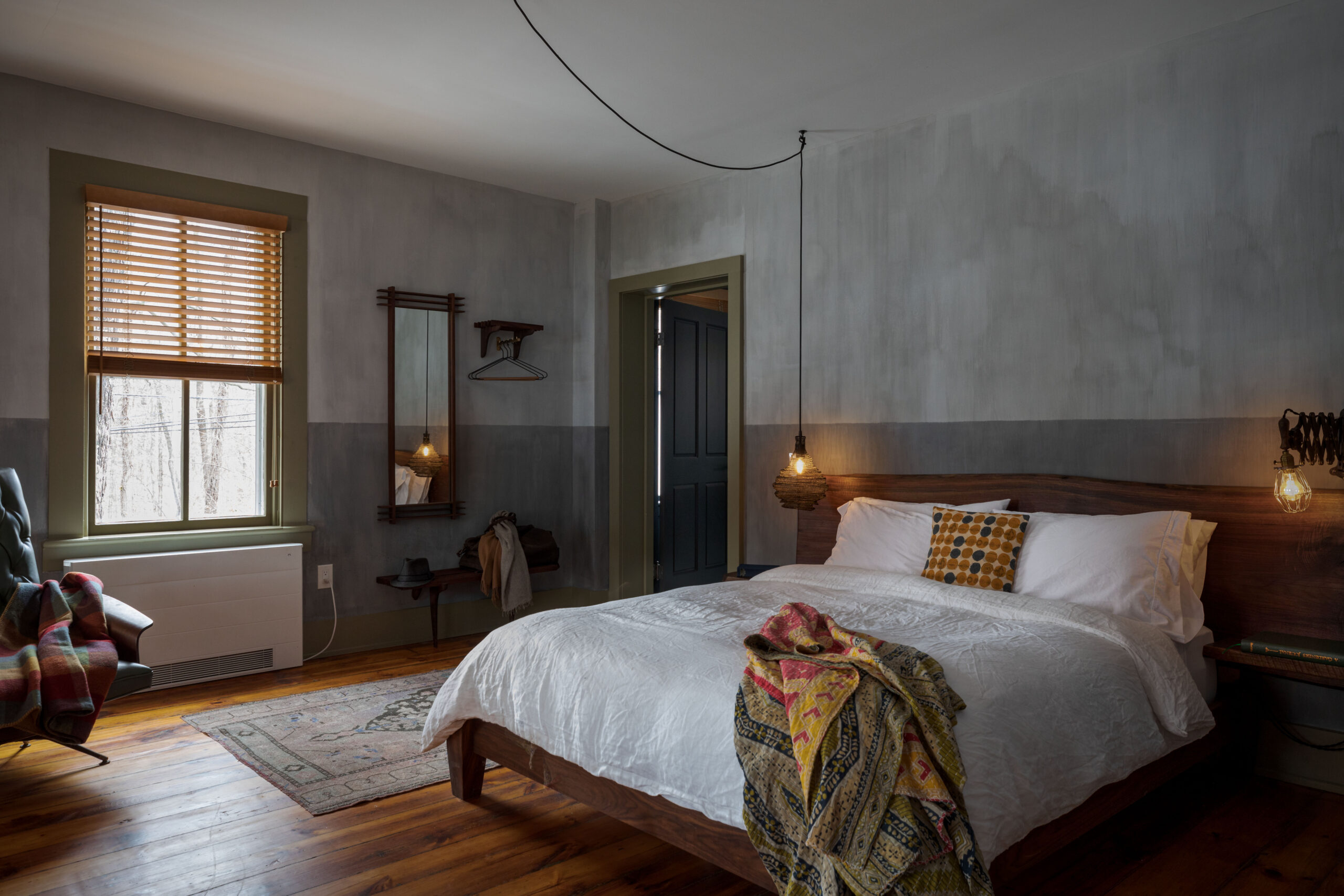 The Howland House rooms evoke a serene mood with the help of hand-mixed limewash paint and oiled wood floors. Photo by Phil Mansfield

They had a big job ahead of them. “Every time something gets repurposed, it takes a beating,” William says. “The building had fallen on tough times, but I could tell the house had good bones. It was a good opportunity to bring something back to life.”

It wasn’t exactly love at first, though. The amount of work was daunting. “We first walked through and thought, ‘Oh, absolutely not. This would be madness,’” Eva says. After a while, the property went off-market. “That’s when we realized how much we wanted it,” she says.

So when the inn came back on the market in early 2019, the Clarks jumped at the chance to own it. They closed in April 2019, and William and Eva were eager to begin working on the house. But within a year, COVID swept the globe along with all its related challenges. 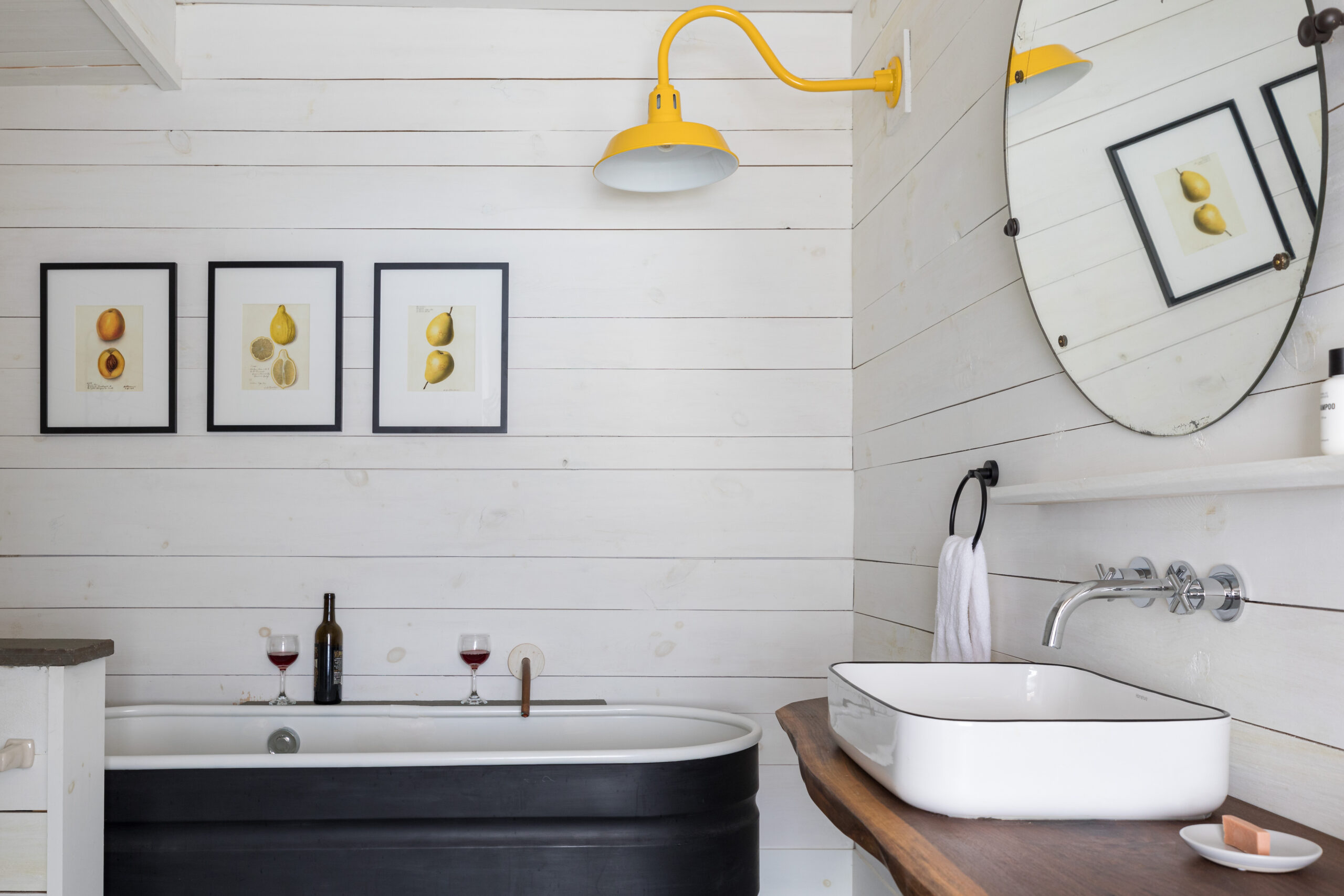 Seven rooms have private baths, like this bath with a soaking tub that’s an ensuite to Room 3. The remaining three rooms share two hall baths in a wing of the inn. Photo by Phil Mansfield

Once the pandemic hit, “half the city moved up here,” William says. Contractors’ schedules started filling up, and it was tough for a small inn to compete with bigger projects.

Then the supply crunch began and materials, too, became hard to source at an affordable price. Still, the duo continued to work on what they could, when they could.

Finally, on October 20 of this year, all their hard work paid off and they officially opened the Howland House for booking with 10 rooms. The accommodations options include one king-bed room, five queens, and four rooms with full-size beds. Seven rooms have private baths, some with soaking tubs; the remaining three rooms are in one wing of the inn, and share two hall baths. 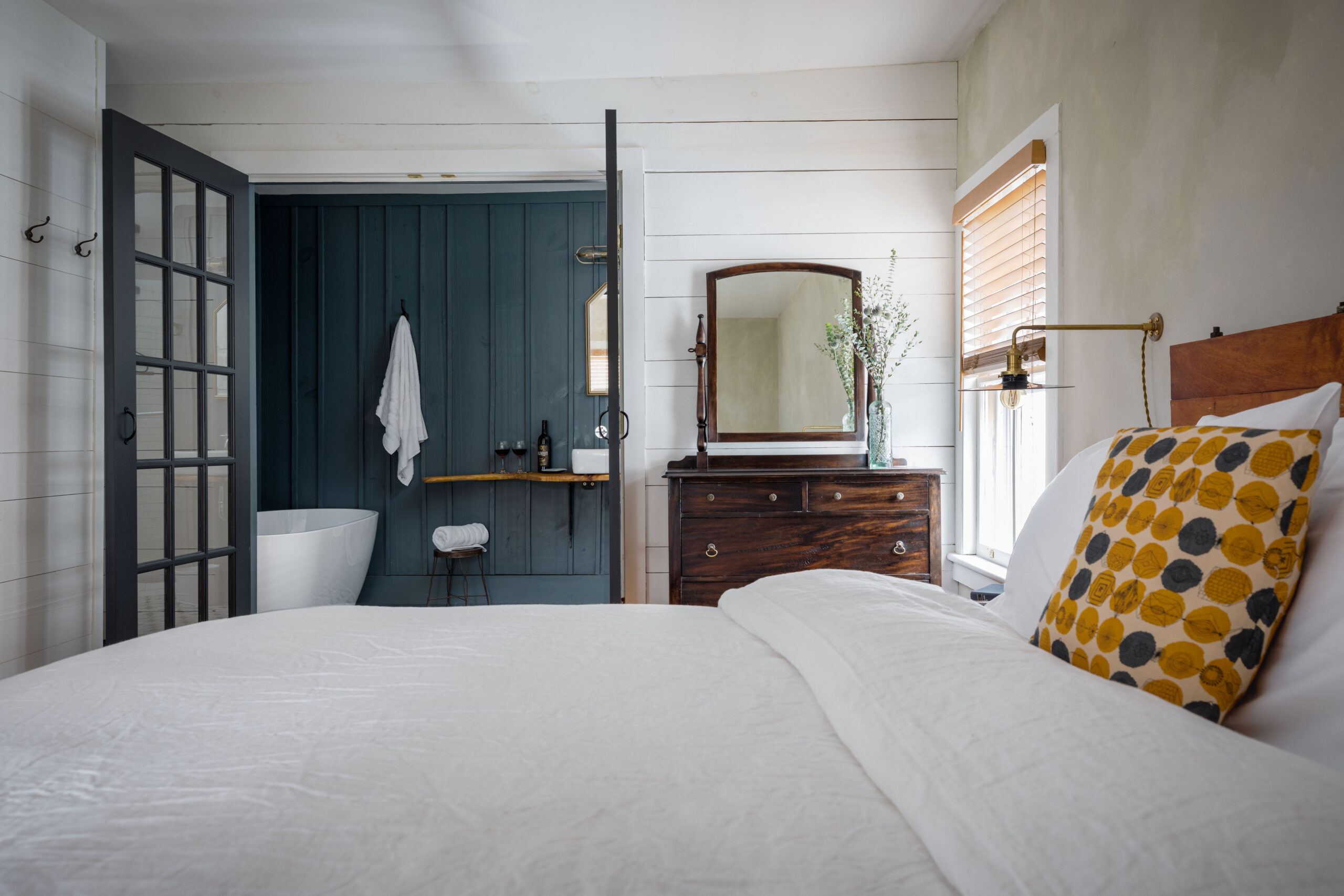 Room 5 has a queen bed and French doors that open to a luxurious ensuite with a soaking tub. Photo by Phil Mansfield

The rooms range from $195 to $320 a night—on the affordable end of the current Hudson Valley lodging landscape. “It was important for us to get as wide a price range as possible,” says Eva, recognizing that guests have different reasons to visit, from family weddings to weekend getaways. Howland House is about two and a half hours from Manhattan by car, or three hours by Trailways bus, which leaves you almost at the inn’s doorstep. That relative convenience attracted visitors more than 160 years ago, according to research done by the Clarks. The inn was known as the Lamson House when it was built in the late 1860s. By the 1940s, it was the Norwegian Lutheran Children’s Camp and Home. But it was the name on an old postcard from 1921 that the Clarks fell in love with: Howland House boarding house.

William and Eva enjoyed uncovering hints of the building’s former lives, and worked carefully to preserve them. “We found a closet with shelves where someone had scrawled Boys’ Bathing Suits and Girls’ Bathing Suits; it was definitely a throwback to when it was the children’s camp,” William says. “We had to take that closet apart to redo the plumbing and wiring, and we reconstructed it—keeping the words on those shelves.” A short time later, when former camp residents came to visit the inn and view the renovations, one of the visitors recalled writing those very words. 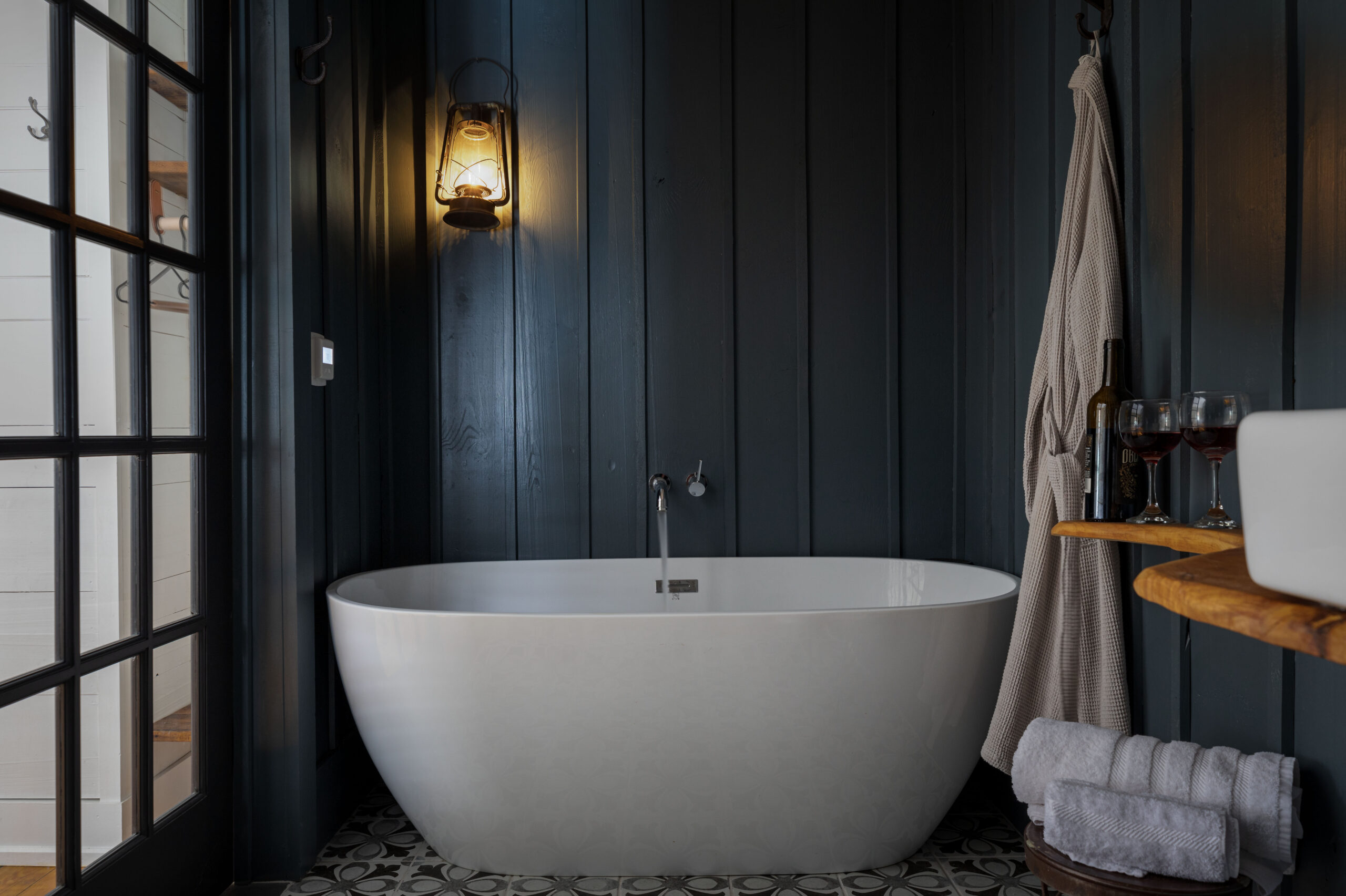 But while revisiting history is fun, the owners are insistent that the Howland House not be a museum frozen in time.  “We cleaned all the hardware from the entire building’s lifetime,” William says. “You’ll find stamped brass, forged brass, and Mad Men-era hardware.” He is wary of the widespread obsession with recreating a building in its original integrity without honoring the entire lifespan in which it has existed. To that end, Howland House wears its timeline on its sleeve with window locks, doorknobs, and other hardware dating from various eras in its more than 100-year history.

“I think you could safely say William is maniacal about reusing the tools and materials that we have found here,” Eva says. “From both an environmental and beauty perspective, old things work well.” For example, the sturdy, patinaed nightstands at the inn were made from old floor joists from the bar-room floor.

“William is an incredibly creative person,” Eva says. “Every decision is made intentionally and carefully. It’s important that all the rooms are unique.” Indeed, no two rooms are alike. The wall treatments range from muted, moody limewash paint that was hand-mixed by William, to wallpaper and white shiplap planks. Even the heated bathroom floors were carefully designed—a peek at the Howland House Instagram page reveals that the black-and-white hexagon tile pattern was designed on miniature hex grids, with peppercorns standing in for the black tiles.

All the furniture pieces at the inn are either handmade (like those nightstands and handbuilt walnut beds in some of the rooms), or locally sourced antiques. A restored mahogany bar awaits patrons of Oliver’s, the onsite bar/tavern that’s slated to open next year. In the meantime, guests can enjoy coffee and pastries in the morning. “We’re really eager to get the bar open,” Eva says. “We want to be a place for local people, too, not just guests.”

If the Clarks were uncertain about what locals would think of their renovations, those fears were erased when they needed to demolish and rebuild the covered porch that wraps around the inn. The porch now has Douglas fir floors, a slatted skirt, turned spindles, and wrought-iron railings custom made in Saugerties. “When we redid the porch, many neighbors drove by cheering and saying, ‘Thank you!’” Eva says. “People were really rooting for this place. They’d all celebrated milestones here.” 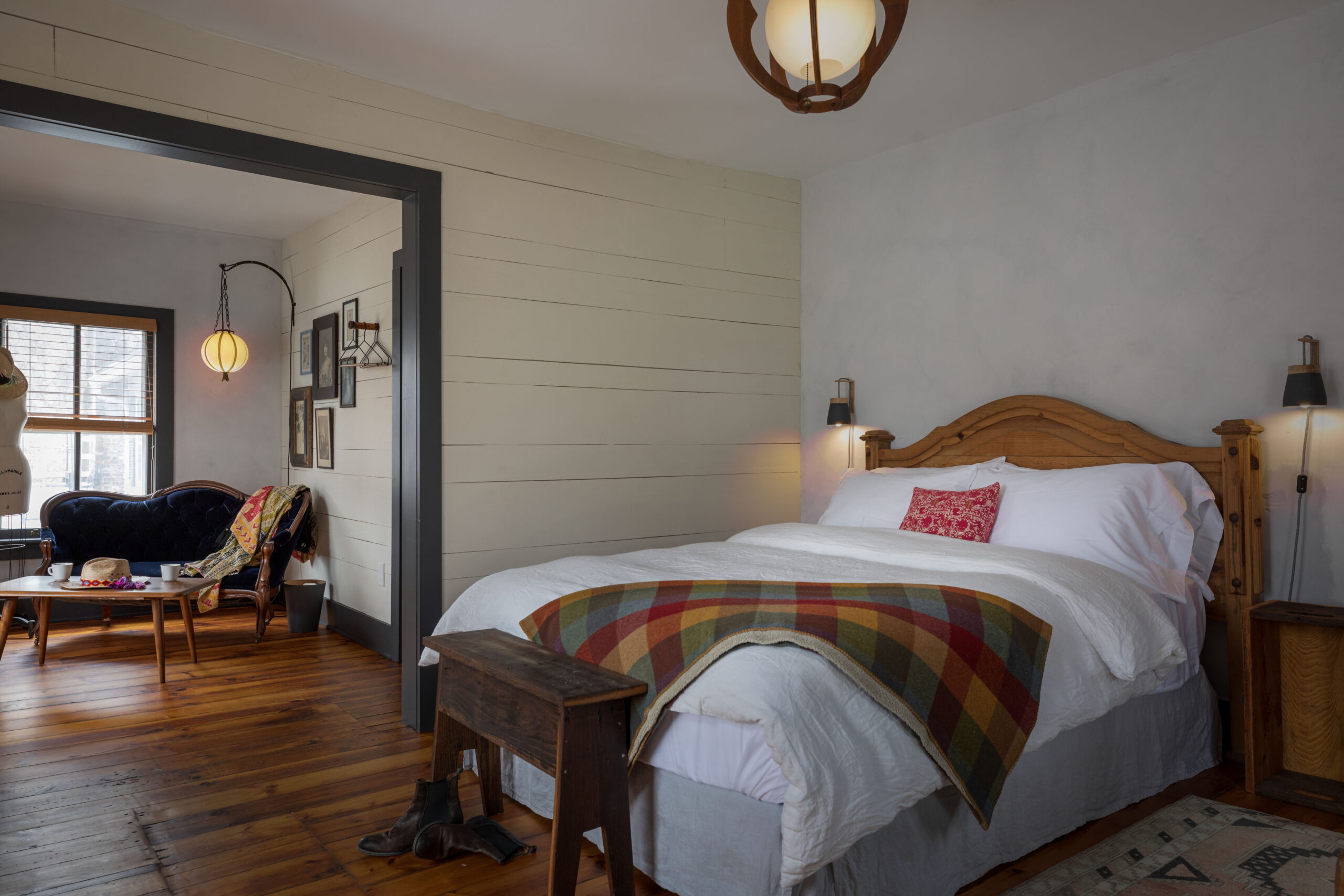 Room 4, on the inn’s second floor, has a queen bed, a private bath with an oversized glass shower, and a separate sitting room. Photo by Phil Mansfield

Howland House is steps away from the Esopus Creek and world-class fishing in the Beaverkill, and five minutes to Phoenicia and restaurants like Sweet Sue’s Phoenicia.

The process of buying and restoring Howland House was not without trepidation for the owners. “It scared me to do an endeavor like this,” Eva says. “But it scared me more not to.”