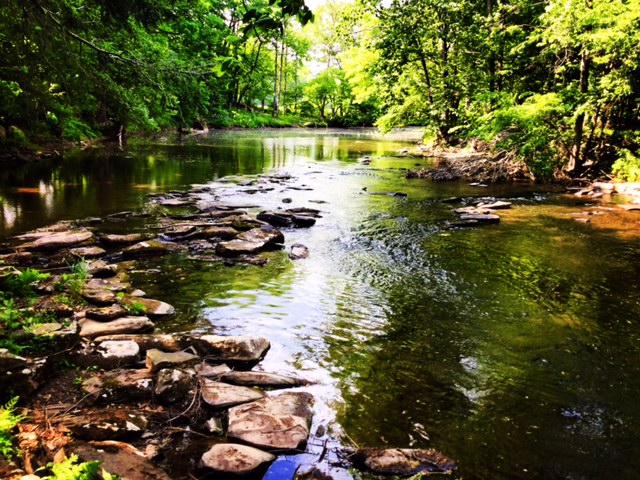 At first it is the scenic quality of the Hudson Valley, which draws you in.

“Change is the law of life. And those who look only to the past or present are certain to miss the future.” – John F. Kennedy

This week for Upstater, I have decided to write a true Manhanite conversion story. My own unvarnished, actually real story; a story of a guy kinda lost, always searching for the next terrific party, the next great adventure, or the next hot trend to enjoy. When Gary and I first moved (not relocated but moved to Manhattan, there is a huge difference between the two terms), for three years we dined out for every meal. Extravagant, perhaps, but a culinary journey I will never forget. Poor Gary of course endured the journey rather than delighted in it; it’s a long road indeed for a guy from Minnesota who loves steak, potatoes, and frozen green peas. We drank, we enjoyed, we dined, but then we grew horribly bored. Another apartment and four years later we arrived in the Hudson Valley. A shirt hand-sewn from Robert Allen upholstery fabric with vintage anchor buttons launched our life here, for this was the attire I selected for our housewarming party that September day in 2007. Obviously, it wasn’t your typical way to introduce yourself into a new community, but for the record it was a gorgeous shirt, albeit tiresomely heavy, and not to mention rather stiffling. Thus began our life in the Hudson Valley. 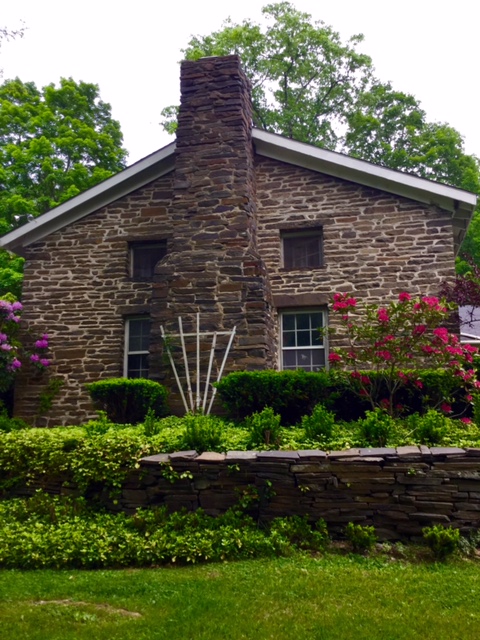 The architectural beauty of homes throughout Ulster County is hypnotizing.

For the first year in the valley I spent almost every moment in my beloved Manhattan. I remember during a glamorous holiday party I broke down, literally complaining to one guest about how I dreaded spending the holidays in “Green Acres;” my nickname for the Hudson Valley. Charming friends extended weekend escape invitations or immediately offered to join us upstate for the holidays (I have a strange habit of collecting really terrific friends). The first Christmas in Ulster County was buried in a fog of frequent journeys to Manhattan, perhaps also endured by a bounty of way too many glasses of champagne. Not a drunk but a guy totally, completely lost – but then the economic bubble burst. Collectively, Gary and I literally stepped from our lives into the Twilight Zone. Financial luxury, (I know it sounds pretentious), once our calling card, slimmed to a paper thin trail. Many of our former kiss-kiss-love-you set of friends from the decades of our lives spent in our individual home states, DC, and Manhattan suddenly slipped away. Our new Hudson Valley friends embraced us, as they had upon our first introduction. Suddenly, Gary and I began to realize we had found a home. No longer did the newest of a season’s fashion matter, no longer did the wait list for made to order shoes hold a significance and no longer did it matter to spend a fortune on a meal, whose conclusion left you starving. While this may seem like an echo of guys of a privileged lifestyle diminished, fear not, for the unspoken mantra between Gary and I, has always been “we will enjoy our lives. If circumstances change we will redefine, yet continue to enjoy, for life is a short journey.” 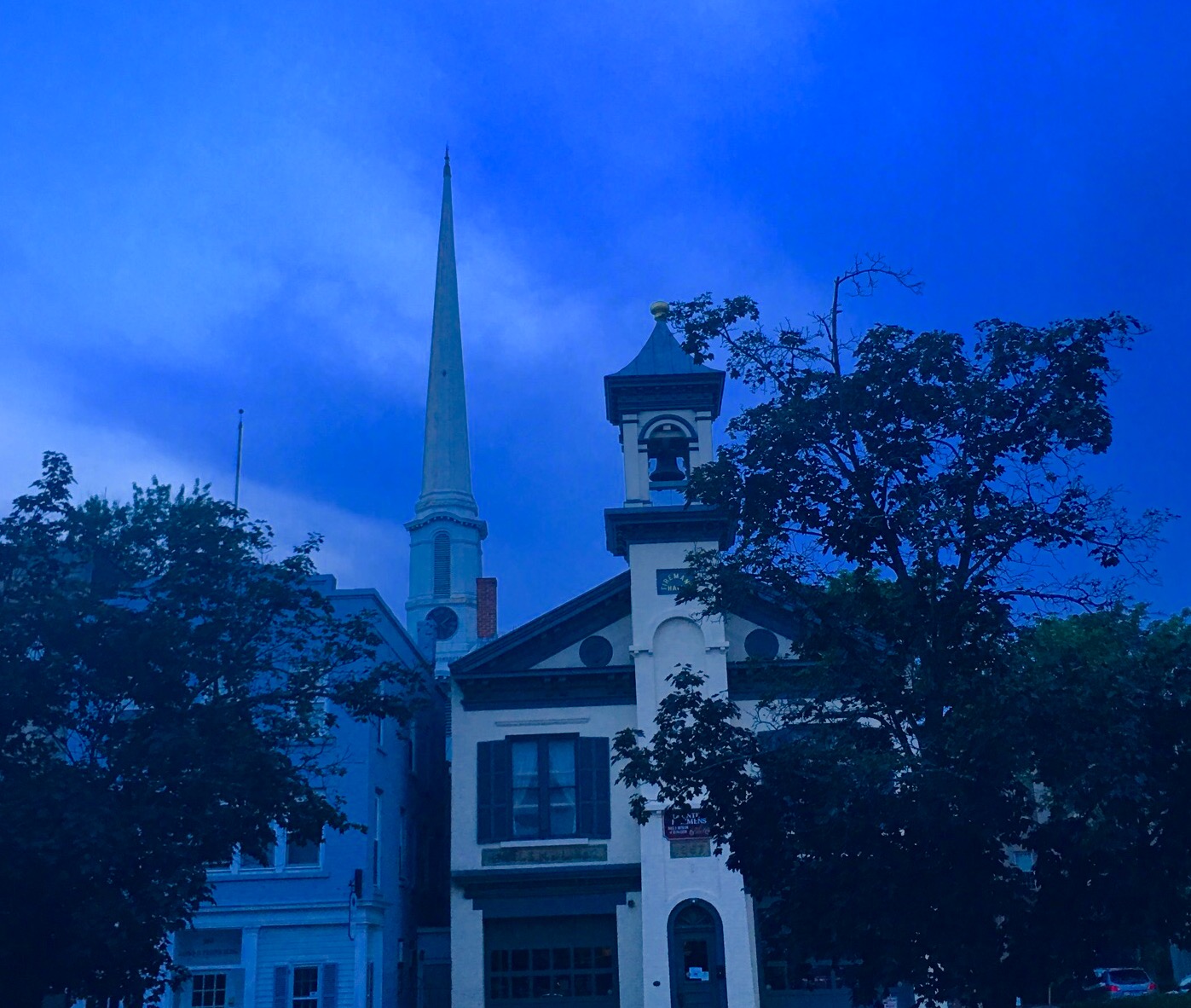 Last week I introduced the Upstater audience to a rather extensive list of holiday opportunities and dining experiences. On Saturday evening, following a delightful book signing party at Exit Nineteen, my very much loved pals Brigid Walsh and Ed Gerrard ventured over to Rich Reeve’s delectable Elephant restaurant (as I noted in last week’s article). Throughout the course of the evening friends cascaded in; noted fashion personalities, and famed interior design mavens, along with the well-healed. For the record each of us was dressed for a casual evening. We each hopped from table to table laughing and having fun. No pretense, just a bunch of terrific folks enjoying themselves. Had we vacationed in another locale perhaps I might have dressed differently. Finally finding myself, I was comfortable in a decade old Italian navy jacket, HM tshirt, skinny levis (as I mentioned in To Hit Clear! I have been on a t regular diet and exercise regime for a year). I have changed my lifestyle, abandoning my once manic addiction to Gucci. But in reality, who cares? From table to table we all joked laughed, hugged, and wished one another a terrific holiday. How often does that happen? 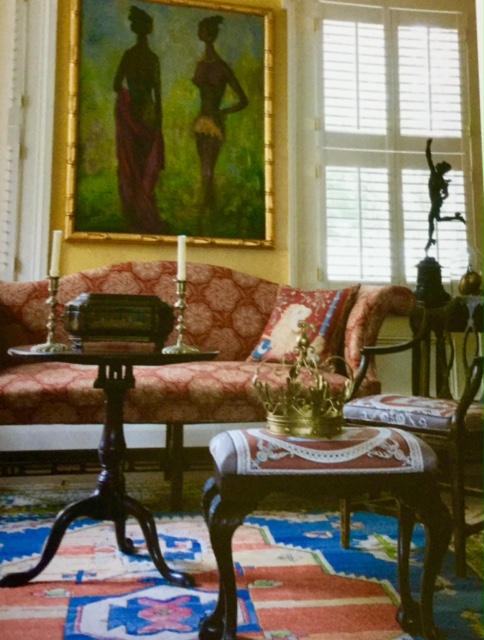 Photo by noted photographer Robin Holland of our former living room, as it was shown in Linda Okeeffe’s Rizzoli publication Heart and Home Rooms That Tell Stories

When I was a young kid growing up in the South, we spent summers on the lake waterskiing, eating deviled eggs, sneaking whiskey sours, and (God help me!) enjoying Moon Pies. My summers were filled with so many friends; mine, my parents, and even my great Uncles and Great Aunts. I thought life was literally a moment never experienced alone. Along life’s journey these things, these moments became lost, as life steps into the way. For a guy who arrived hating every single solitary moment spent in the Hudson Valley, boy has life changed. During the economic down turn, I opened a pop-up shop in the SKillyPot In the Historic Rondout. It was a pop-up window venue featuring tons of transferware porcelain along with a few yard sale finds. They were pieces I had initially acquired at a higher price point than my retail sales version. My maternal Grandmother, who had literally stepped into my life stating “lamb chop” (yes, she called me lamb chop on occasion), “you must have many economic lines in the water at all times.” Not one of my best or most profitable misadventures, but with one exception. Through this experience I met the author, the editorial director, the panelist, and interior design author Linda Okeeffe. When in recent times, I introduce Linda to someone, automatically everyone assumes we met decades ago during a splashy party in Manhattan. In reality we met at a cocktail party in the SKillyPot in Kingston’s Rondout District. Linda is literally one those friends who I spontaneously embrace during a cocktail party. Whenever I do she looks into my eyes and smiles. As you flashback to my rather supposedly entitled upbringing, as a closeted fearful guy, every holiday season on my gift list were listed at least three interior design books. Always, each and every one were Rizzoli publications; monographs acknowledging taste and design, and pictorially reconfirming that it was okay to be you. In those early days on my summer porch, seated in an antiquated rocker, I vowed that one day I would also be featured in a Rizzoli book, a resolution that I’d journey through my life successfully being true to myself. A feature which would say “Yes, I am me, this is where I live.” An acknowledgement which literally presented itself in a rather wonky multi-dealer market in our own Kingston, New York. 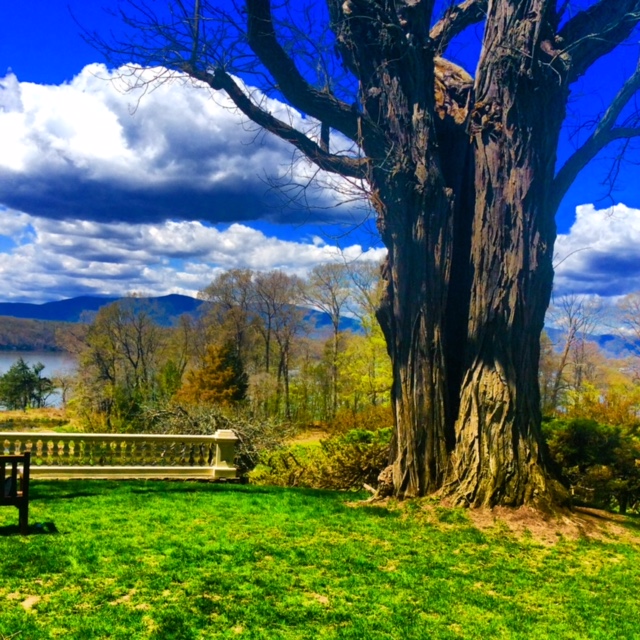 So often in these articles I mention hip friends, parties and of course the never ending martinis (I do love martinis), but I also love spring flowers, a Summer porch, and laughing with friends. During long hot summer Sundays I often sat on my family’s Southern porches. On rainy days I’d read back issues of Vogue from cover to cover, filled with articles written by and about some of the world’s most noted authors, playwrights, and social commentators. Last summer season when my friend Meria Blausten, founder of the Woodstock film festival, called to say, “Haynes, my friend Brigid Walsh, the Senior Executive Director of events, communications and partnerships at Vogue would to like see your house,” I flashed back to those rainy summer porch days of my youth. Little did I realize via this introduction I would meet a friend, who I often hug, then kiss (on the cheek!) to say I love you. It’s odd really that a guy always lost would, in his adult years, develop a true friendship with an individual associated with a publication which once brightened his youthful summers. 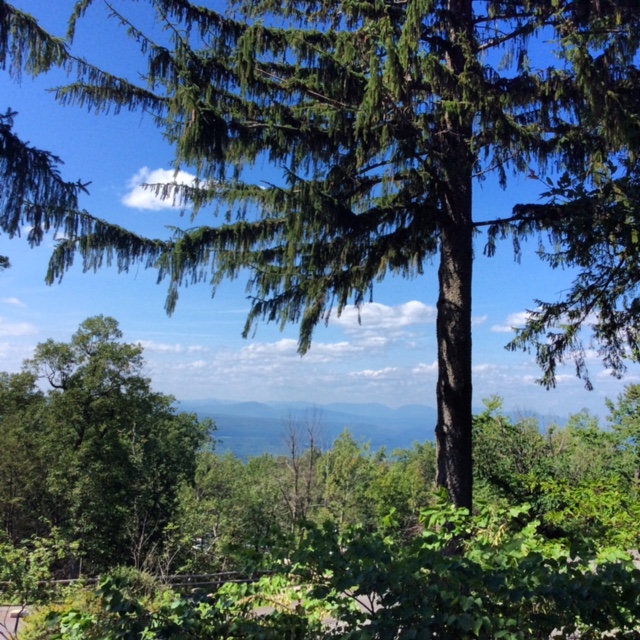 The Hudson Valley’s greatest calling card is the landscape and the people who inhibit it.

Last weekend via Facebook and Instagram I enjoyed and chuckled with my collection of followers and friends, many of whom I have never met. In each and every case I have been delighted by their photographed exploits. On many occasions I might have been slightly envious of their oh-so-stylish attire. Yet, while in my own little Hudson Valley world I have been embracing my friends in sincere moments of mutual admiration, while wearing tshirts from H&M, with my signature collection of navy sport coats, pocket squares (my Grandad was a dandy, pocket squares are a tribute to him), and a rather thrifty pair of Gary’s cast off Italian wingtips matched with shoes I would never have worn a decade ago. But hey, I am with my friends, a few who have rather glamorous daily lives but who on a daily basis are my pals; all individuals not known to me before my move to the Hudson Valley. 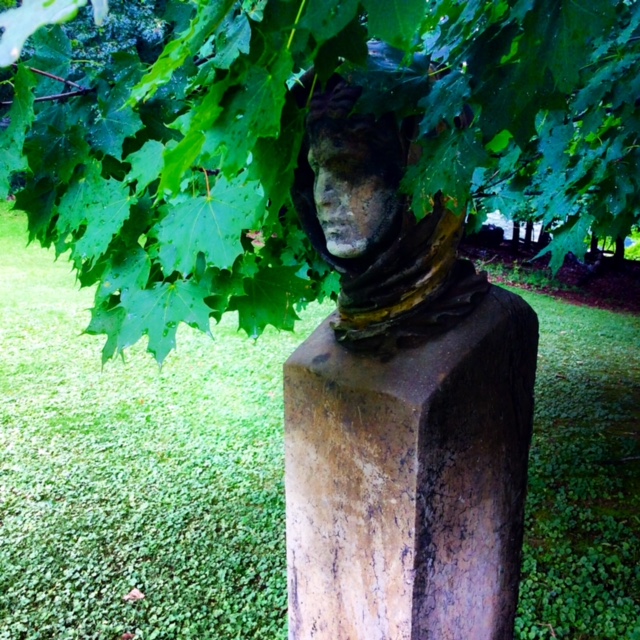 Serenity is easily enjoyed throughout the seasons in Ulster County

A pretentious, exhausted, reluctant guy arrived in the Hudson Valley nine years ago. Perhaps kicking and screaming, perhaps thinking really..? Do you really think this will work? Along the way Gary and I have met many truly lovely people: an 18th Century collector and his wife, an educator, the bee keeper and her collection obsessed partner, two Manhattan psychoanalysts who redefined the term friendship, the daughter of the former owner of our initial Kingston home who makes Gary and I smile daily, and a local industrialist and his designer wife who have brought so many perfect moments into our lives. In a nondescript way, as a glorious holiday weekend concluded I realized moving to the Hudson Valley has by far been the most consequential experience of my life. Through these Upstater musings of mine I try to introduce you to a rather enchanting place, and along the way discussing dining, shopping and outdoor adventures. On occasion I also introduce you to amazing individuals who have had similar life journeys which have led them to the Hudson Valley. For many of these individuals, the move was transformative to their lifestyles and careers; a rebirth in some cases. Through highlighting various MLS properties currently listed in Ulster County, I am offering a comparison to the properties currently listed in the five boroughs. The price point comparison in itself should be enough to spark a bit of interest in the Hudson Valley. Summer has started, so now is the perfect time to look north. Who knows, you might be making a bold step into finding both a new home and lifestyle for yourself. I am living proof this is not a hypothesized phenomenon but a reality. So come on and motor north! 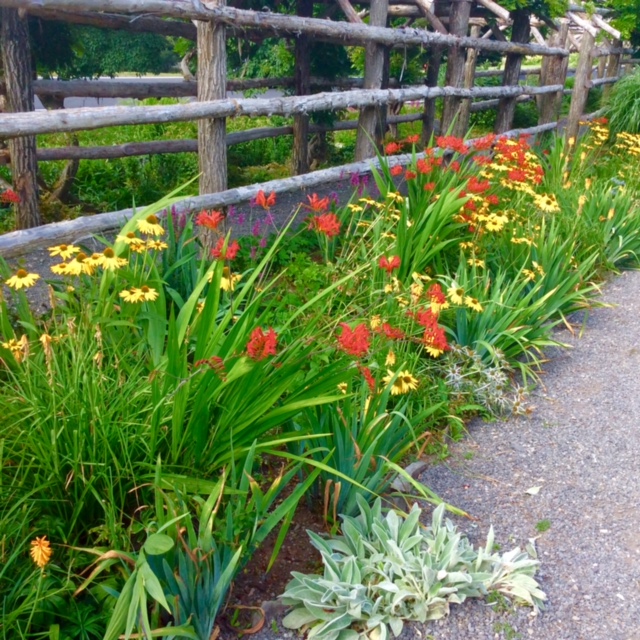 It is the perfect season to motor north to enjoy the natural bounty of the Valley.