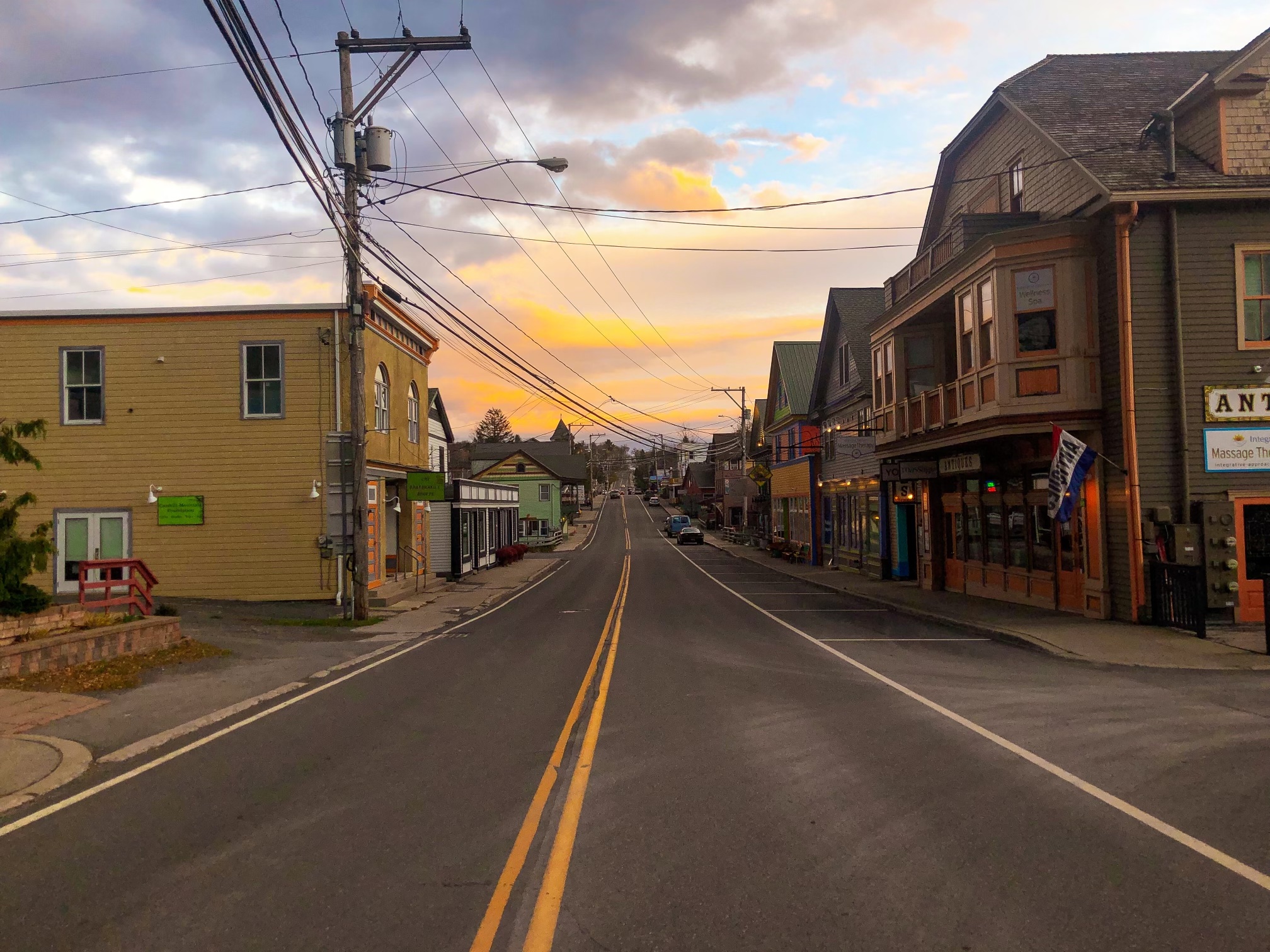 Main Street in Tannersville at sunset

Winter is coming to the Catskills, which in the past has meant that things in Hunter are about to get very busy.

That’s arguably no longer the case, but not in the way that you might think. The eponymous mountain that overlooks the village of Hunter, home of the most historic and arguably most popular ski resort in the Hudson Valley, still keeps Hunter and its neighboring village of Tannersville, with which it shares a Main Street, packed in the colder months. What’s different is that the twin villages are now busy pretty much all year round, as hikers, leaf-peepers, and anyone who just wants to spend a little time outdoors have discovered that Hunter and Tannersville are ideally situated as a base of operations to discover what the Catskills are all about. 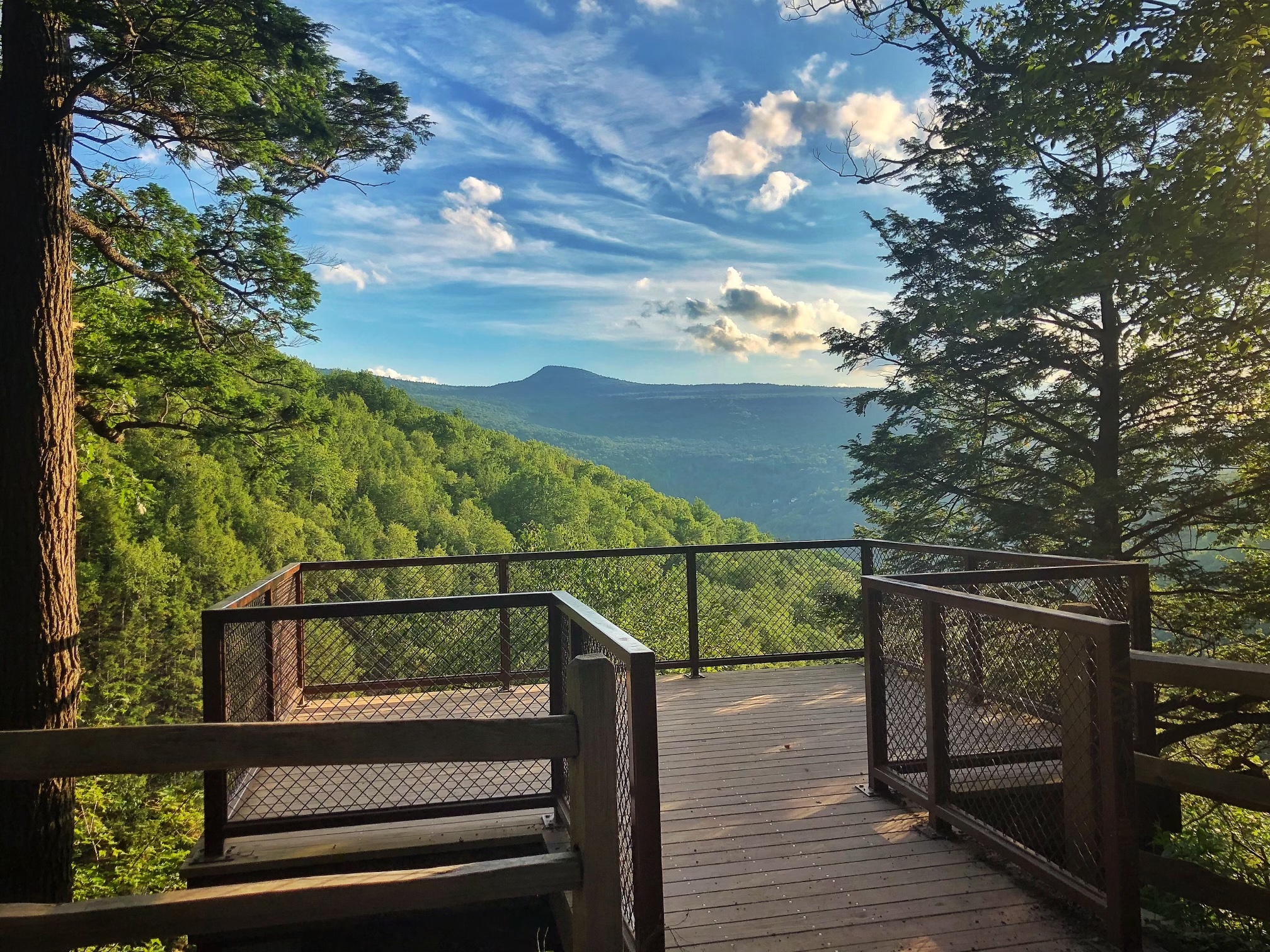 One of the Kaaterskill viewing platforms

The small valley that the towns are contained within is bordered on the north by the Windham-Blackhead Range and the 22-mile long Escarpment Trail. The Hunter, West Kill, and Indian Head ranges, along with the infamous, 24-mile long Devil’s Path, make up the southern border of the villages. And to the east is the North/South Lake campground and the double-tiered Kaaterskill Falls, the highest waterfall in the state and the site of Rip Van Winkle’s fabled power nap. But don’t walk around with your dog-eared Washington Irving books looking for the exact spot where Rip and the ghostly crew of the Half Moon went on their mystical bender: Irving wrote the tale when he was living in England and later in life sheepishly admitted that he hadn’t even been to the Catskills yet when he wrote it.

Also, watch your step. In addition to being one of the Hudson Valley’s most popular attractions, Kaaterskill Falls is also the deadliest, with over 200 deaths occurring in the past 200 years as visitors who try to get just a bit closer for a better view lose their footing and instantly regret it.  The state has added additional trails, railings, staircases, viewing platforms, and signs in the last few years in order to keep people safe, but the crowds keep coming. It’s still worth checking out, but aim for early in the morning on a weekday to beat the masses. Then again, a few years ago I went to the upper falls pool at sundown during Labor Day Weekend and had the whole waterfall to myself except for two tipsy Italian tourists. 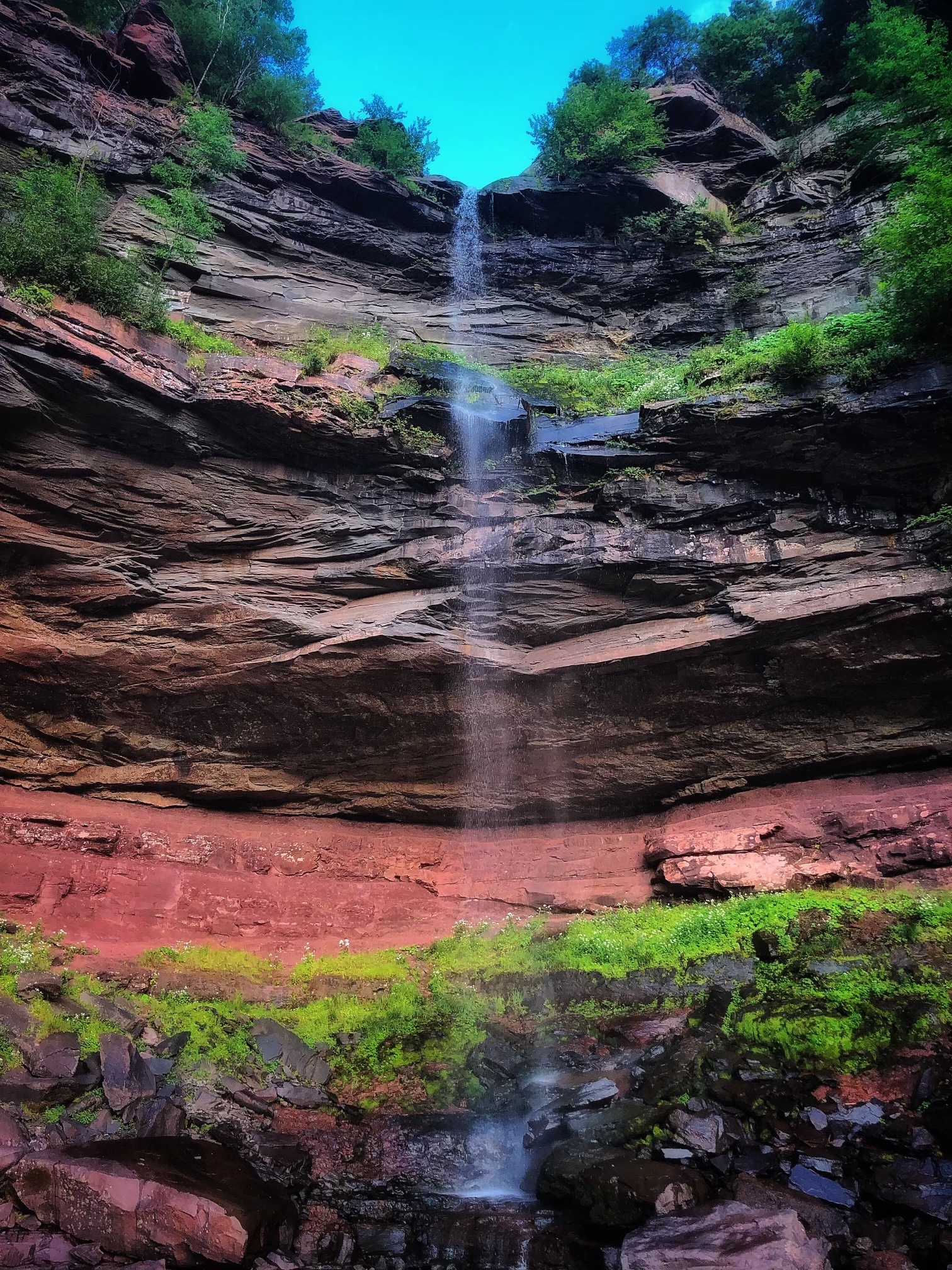 Should you also find yourself in Hunter or Tannersville a few sheets to the wind on a beautiful evening, two things: One, for god’s sake don’t go to a slippery, 260-foot-tall double-decker death trap. Two, get a room. Thanks to Hunter Mountain’s perennial popularity as a skiing destination, the two villages have more than enough beds for every taste and budget. Feeling fancy? The restored Scribner’s Catskill Lodge reopened five years ago with 38 chic, spacious rooms and stunning views. Too fancy? Walk across the street to the Hunter Inn, a more modestly priced hotel that still manages to be cozy, welcoming, and comfortable. Craving bed-and-breakfast vibes in a vibrantly painted Victorian house? Throw a rock man, they’re everywhere.

Make sure it’s a bed and breakfast though, before you plunk down your weekend bag: Pretty much every building on Main Street in Tannersville is decked out in bright colors and funky accents, from private homes and drug stores (iIs there a homier and more pleasant pharmacy in the Hudson Valley than Wellness RX? It’s got a porch you could sip lemonade on while entertaining gentleman callers) to the red, white, and blue-painted post office. It’s all the work of the Hunter Foundation, who came up with the “painted village in the sky” concept in the ’90s and started supplying paints to the residents of Tannersville to make it happen. In time, the painted houses picked up murals and flourishes, making the town impossible to drive through without stopping for a gander (expect to see a lot of Rip Van Winkles, big and small, hiding on the sides of buildings throughout town.) 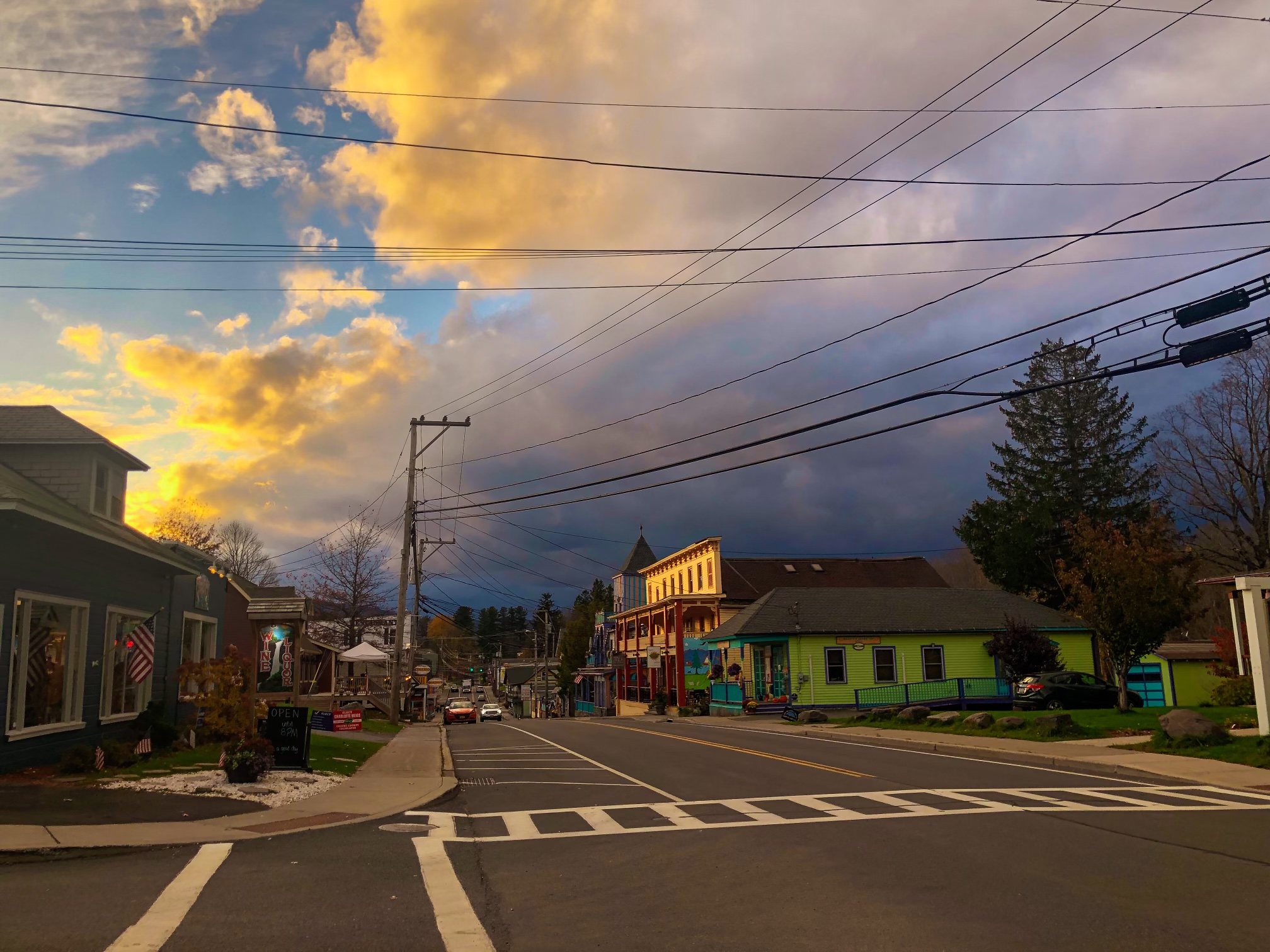 The villages are not frozen in time however. In a sign of things to come, one Tannersville’s many antique stores recently became a co-working space, as newly remote workers flock to the Catskills. There still are plenty of antique stores in Tannersville though, so don’t worry. Check out the aptly named Bones and Stones: A handsomely stuffed bobcat there will set you back $1,000, which seems like a good price for a taxidermied big cat, although I admittedly have no reference points.

I still have never been to Tannersville without stopping for a burger and ice cream at Mama’s Boy Burgers across from the post office, even when it’s the dead of winter and I’ve already eaten. You’re also going to want to pull over if Twin Peaks Coffee and Donuts is open, where you can watch the inventively flavored doughnuts made just for you come right out of the fryer. For those who want an actual meal as opposed to a box of doughnuts, Pancho Villa’s remains a year-round favorite for Mexican food. 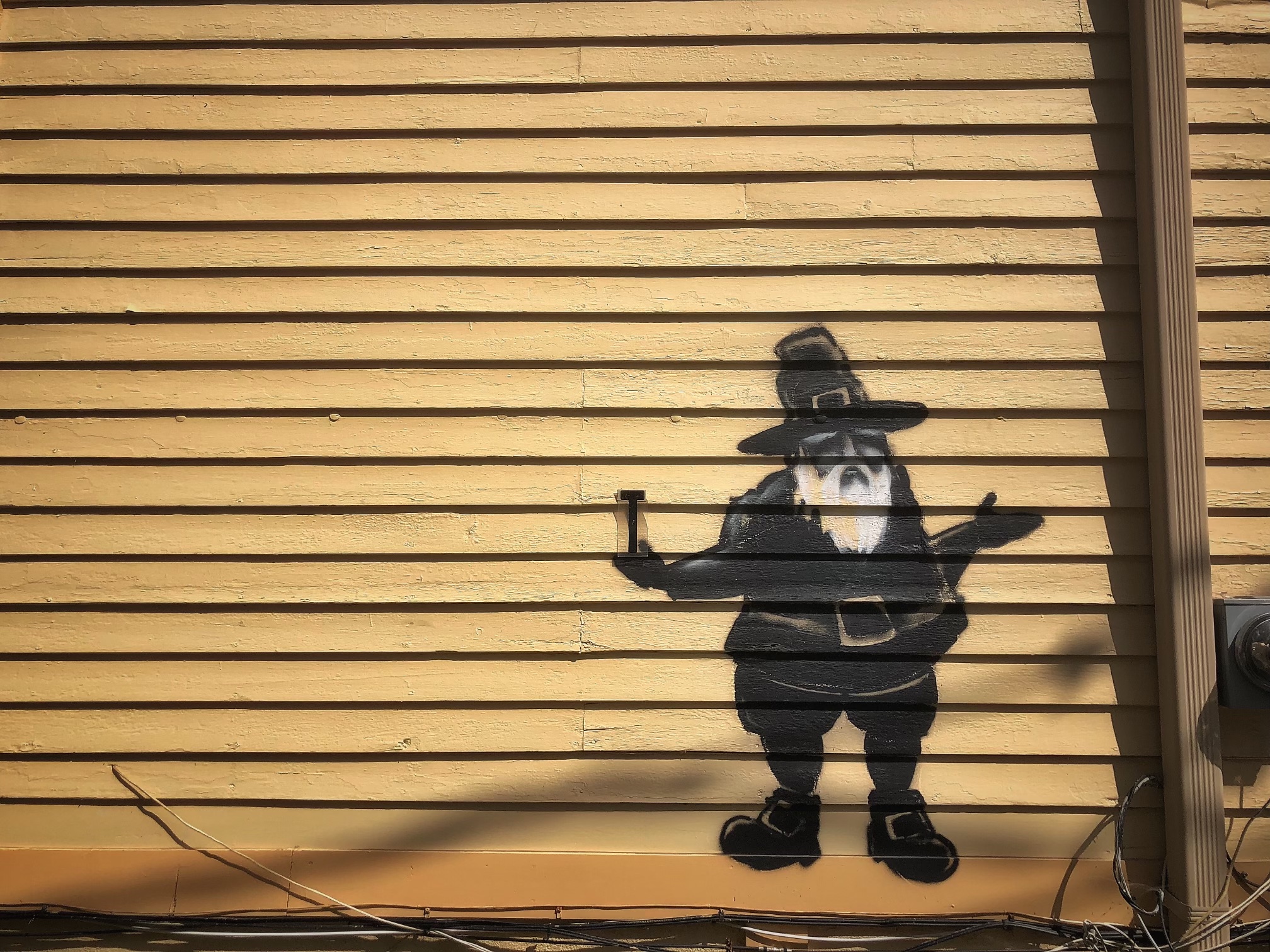 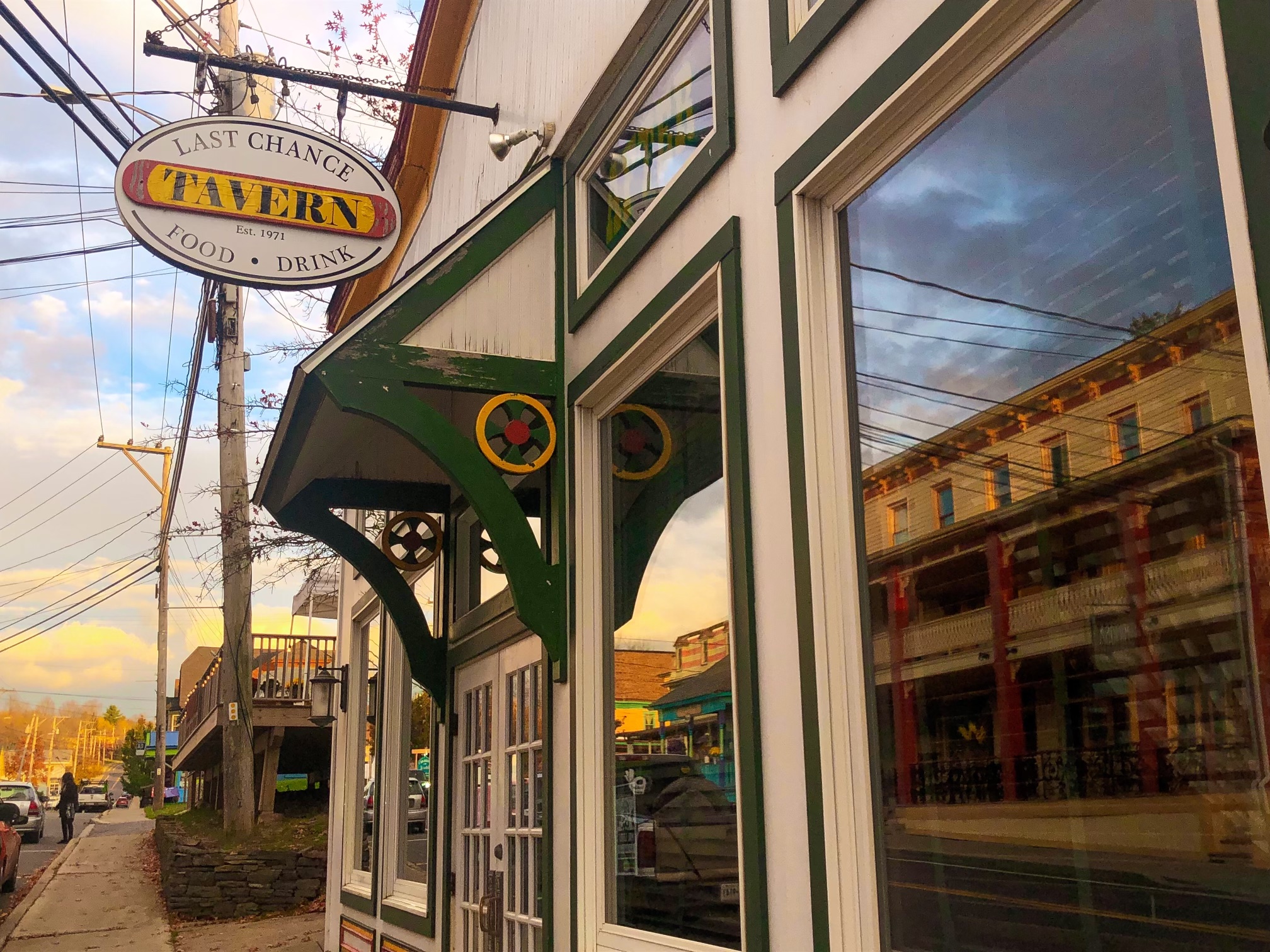 Last Chance Antiques Cheese & Cafe celebrated its 50th anniversary this year: Where else can you go antique shopping, buy fine local cheeses and maple syrup, and get a buffalo chicken wrap all at the same time? Jesse’s Harvest House and Deer Mountain Inn both offer elegant local cuisine in a rustic setting with lodging upstairs for those who can’t bear to leave. And any spot worth visiting naturally has to have its own craft brewery. Hunter Mountain Brewery fills the bill here with its wide selection of in-house beers and hearty food to nourish weary hikers, including a surprising assortment of Indian dishes.

Perhaps the outdoor life is not for you, and you need something else to do while your friends and significant others tromp around the mountains on foot or on ski. The Catskill Mountain Foundation runs a movie theater in Hunter and the Orpheum Performing Arts Center in Tannersville if you’re a “more Strauss, less summits” kind of person. 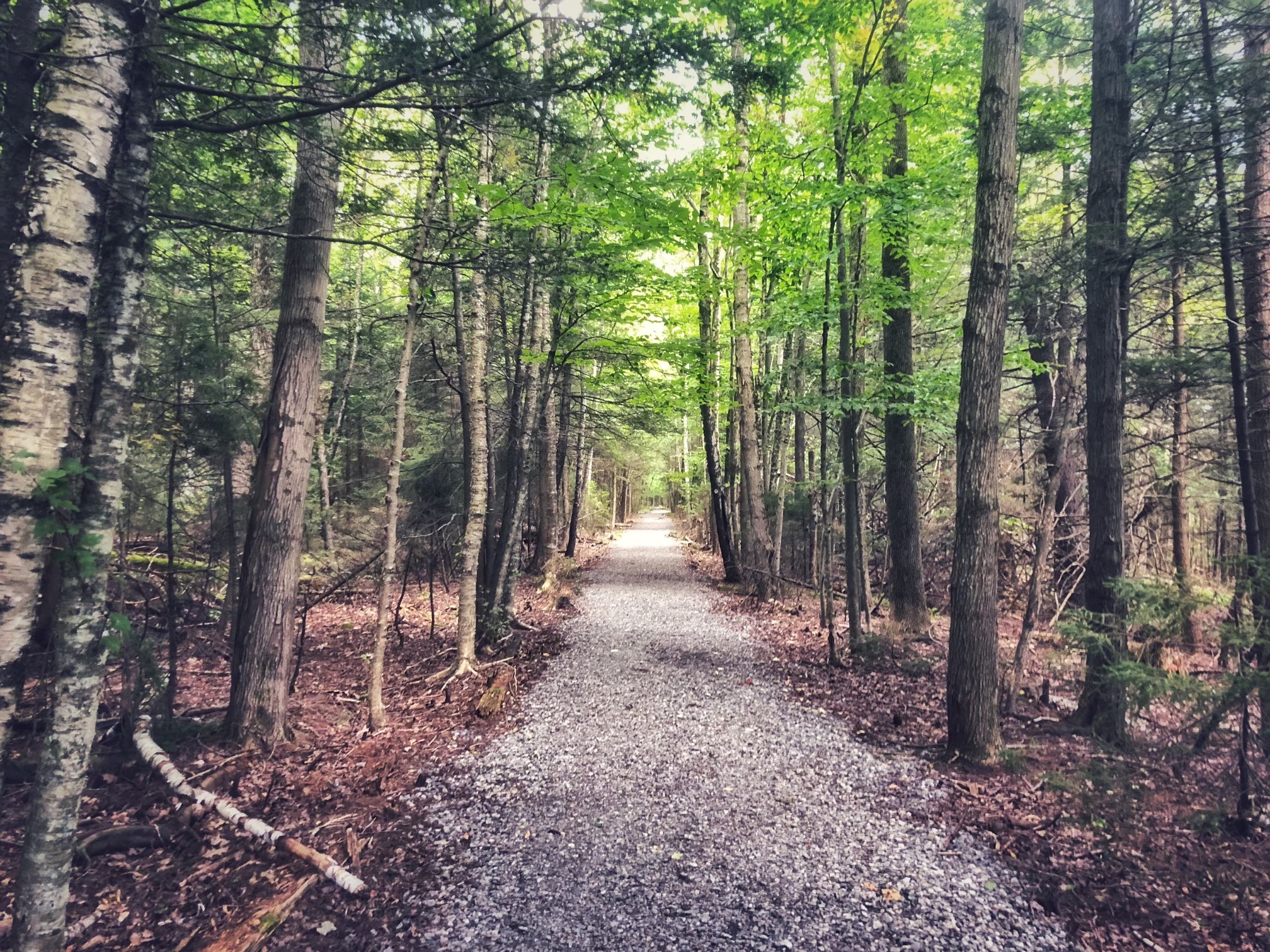 Or you could do nothing. A few years ago I paid a visit to Peter and Sarah Finn, founders of the Catskill Mountain Foundation, at the elegant farmhouse that has been in Peter’s family for over 125 years. They were sitting on their back porch, shucking corn that they had grown. I asked them what they liked to do for fun and they stared up at Hunter Mountain, resplendent in the golden glow of the late summer sun.

“Honestly, some days we just sit here and look at the mountain,” Peter said.