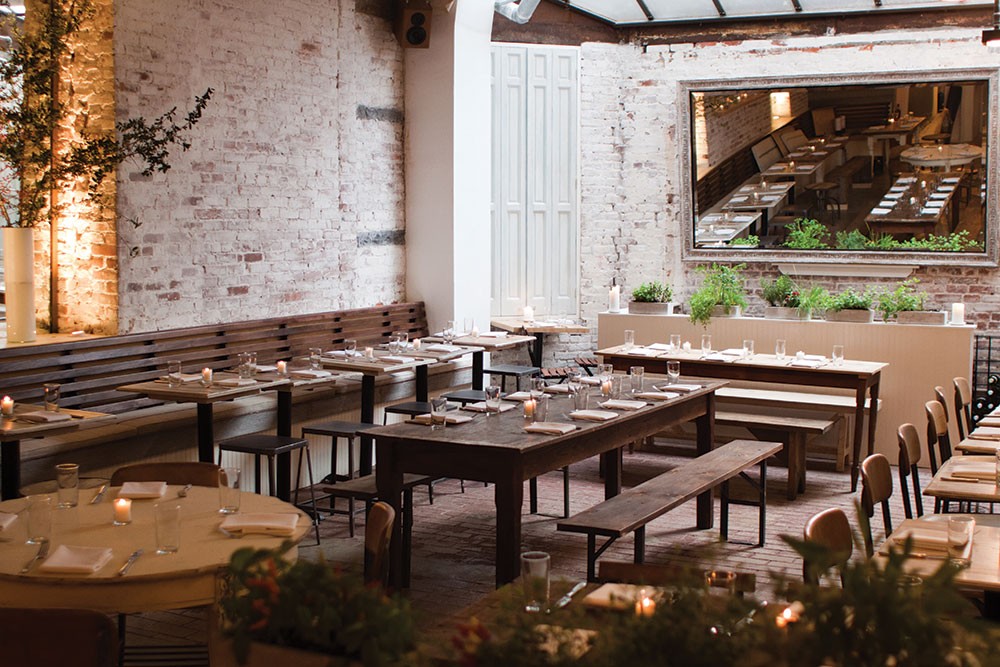 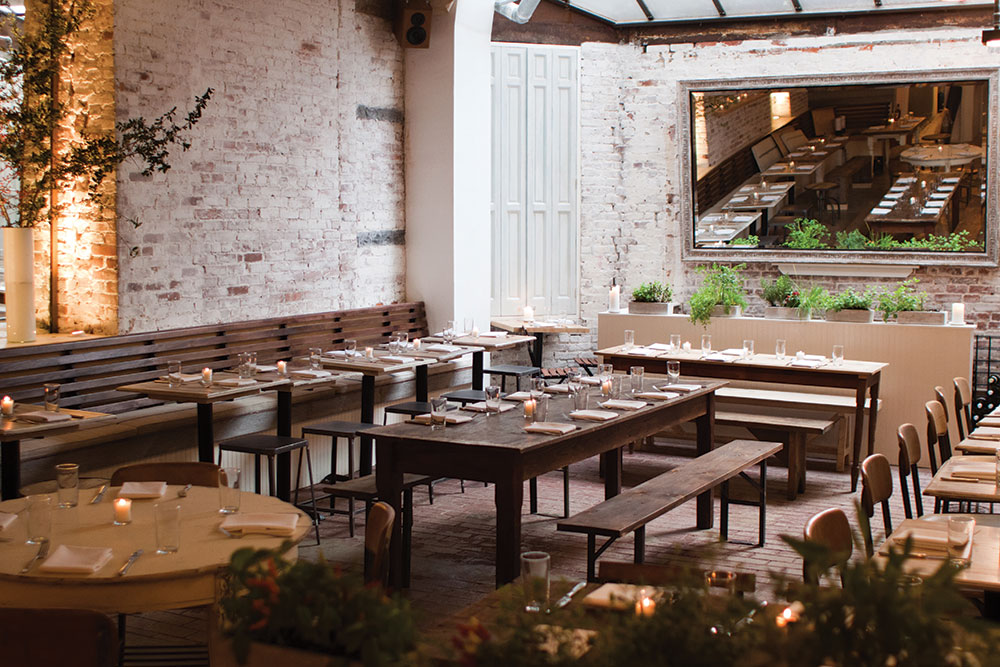 New York City has long depended upon the Hudson Valley for sustenance in ways that aren’t always obvious to New Yorkers. Foremost is the water that’s piped down from Ashokan Reservoir, at the foot of the Catskill Mountains. And it’s no coincidence that New York is nicknamed the Big Apple—that moniker came from the vast orchards of imported apple trees that were planted some 300 years ago by the Huguenot settler Louis DeBois, who helped found New Paltz and established a family farm in then-fledgling Flushing. Throughout the 19th century, New York’s hotels, restaurants, and wealthier residents kept their food and dairy products chilled in ice boxes courtesy of ice blocks that were cut from the frozen >Hudson River each winter, stored in icehouses throughout the valley, and delivered to the city via train. Today, so much fresh produce and other foods are transported from upstate to the city that the state has established the Hudson River Foodway Corridor, an energy-efficient, intermodal transportation route utilizing barges and trains.

It’s been nearly 40 years since Alice Waters began listing on Chez Panisse’s menu the names of the farms from which she procured her ingredients—a gesture that set the food industry abuzz with the farm-to-table philosophies and locavore sensibilities and helped fuel the current national conversation about the sourcing of our food. So it seems like it’s about time we heighten our awareness of the vast but often unseen connections between apple country and the Big Apple. After all, the Hudson Valley does more than feed our hungry bellies. It also subtly shapes our culture. 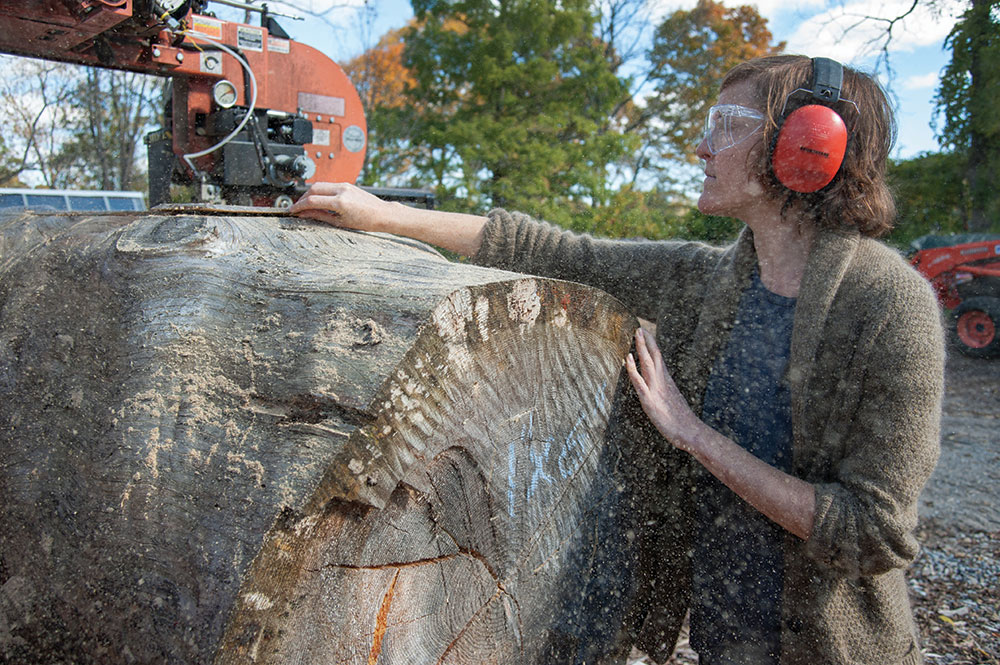 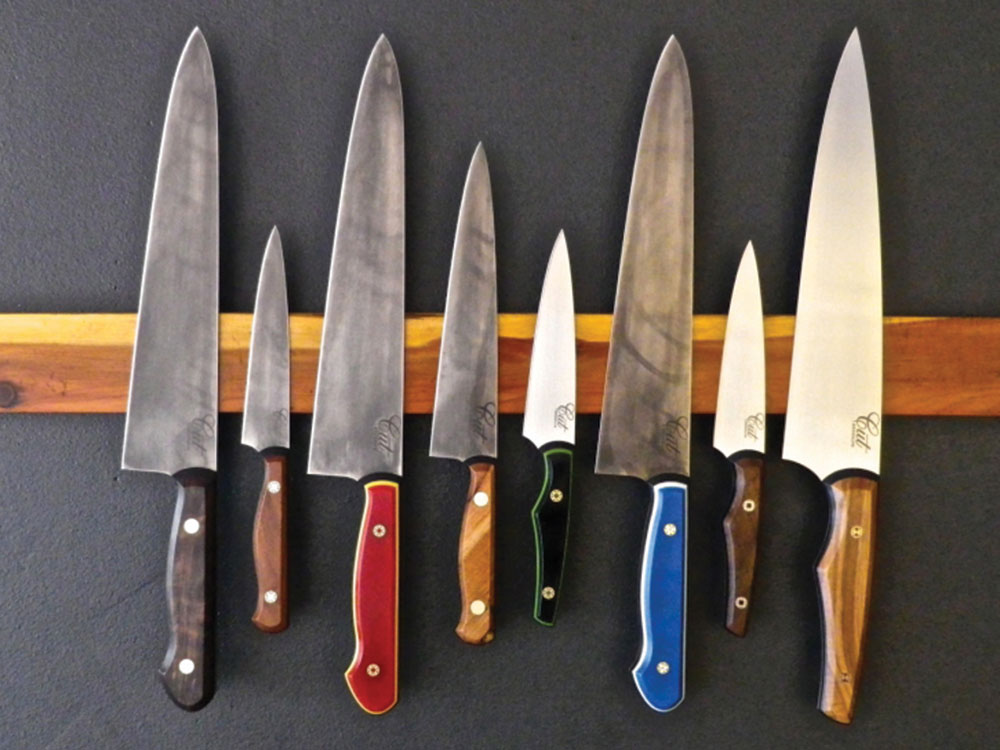 A Cut Above
Joel Bukiewicz, owner of the cutlery Cut Brooklyn, works hand in hand with New York Heartwoods, a Warwick- and Kingston-based sawmill and showroom, to make one-of-a-kind chef’s knives of unsurpassed artisanal quality. New York Heartwoods owner Megan Offner sources and mills high-quality wood that’s dumped from construction sites or from diseased or dead trees, which would otherwise be headed to a landfill. “A lot of guys in my world,” explains Bukiewicz, “use exotic woods that take eons to grow and come from faraway places under who-knows-what circumstances. But with Megan, I’m able to use local wood sourced from downed trees. She saves all the gnarly cut-off parts for me, and consistently sends me the most beautiful wood I’ve ever seen.” Bukiewicz utilizes the wood to craft handles for his carbon steel blades, held in place with brass, steel, and copper mosaic pins, which he sells at his store in Brooklyn and his barn workshop in Durham. “I never knew, before Megan,” he continues, “how varied and gorgeous maple can be—the figures and shades are endless. She’s the best. The pieces I make are better because of Megan, simple as that.” Cut Brooklyn’s product range includes journeyman (all-rounder), prospect (chef’s), butcher, boning, and filleting knives priced from $350 to $650 each. 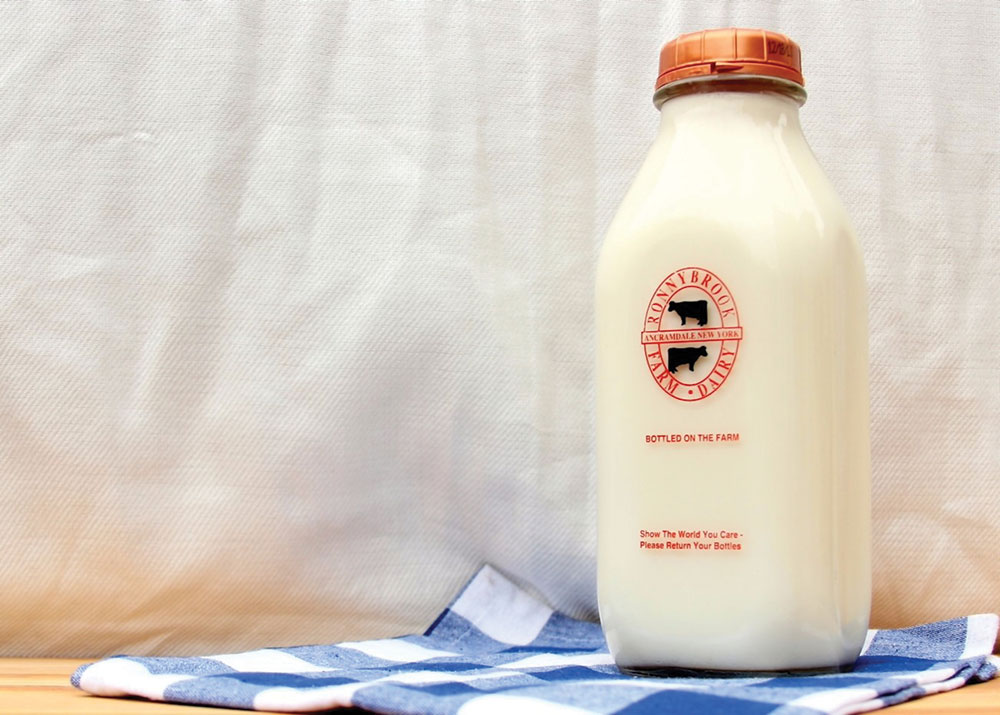 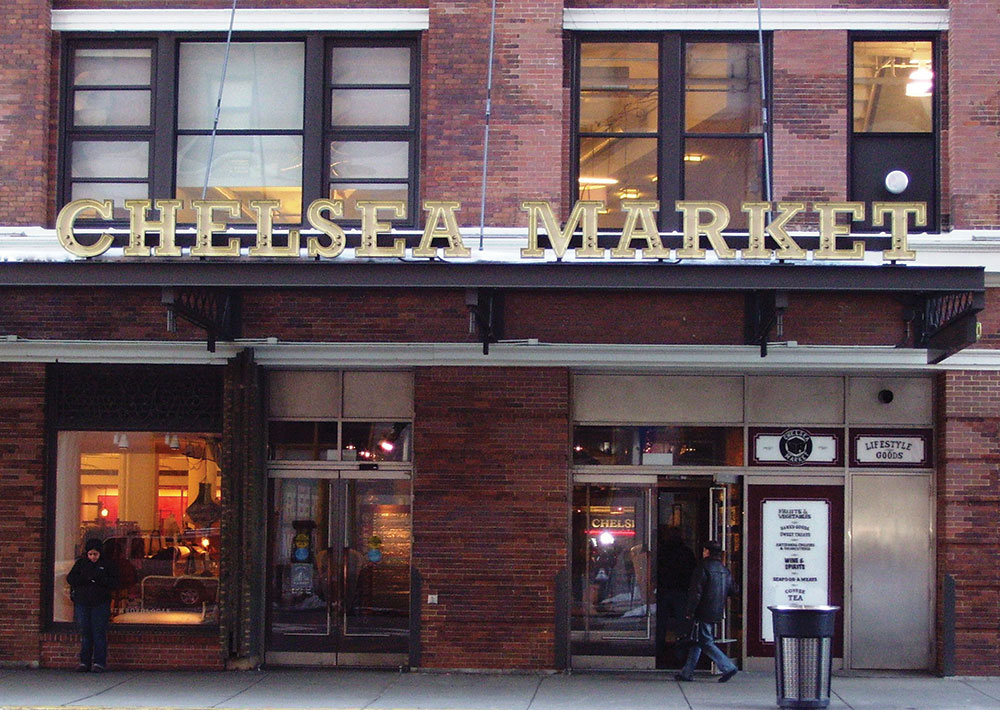 Milking It
Having New York City as its primary market has been a key factor in the success of Ronnybrook Farm Dairy. Any New Yorker who visits Eataly, Whole Foods, or nearly any New York City green market is familiar with Ronnybrook’s logo: two cows showcased within a vertical white oval, which appears on the company’s artisanal-quality milk, yogurt, ice cream, and butter, not to mention the best eggnog ever to be had. “Milk at its finest quality should be nearby its consumers,” says Kate Osofsky, a third-generation member of the Osofsky family, owners and operators of the farm in Ancramdale, near the city of Hudson in Columbia County. “This way it does not need to be overly processed to travel long distances.”

Over 42 New York City markets offer Ronnybrook products, with more than 100 restaurants obtaining Ronnybrook ingredients at those markets weekly. Last October, the Chelsea Creamline opened its doors in Chelsea Market, featuring a dairy counter that offers ice cream, milk, and dairy exclusively from Ronnybrook Farm. Its lunchtime classics include grilled-cheese fingers dipped in tomato soup and an all-American cheeseburger, along with chasers like ice cream sundaes, milkshakes, and old-fashioned egg creams—all of which came from an under-two-hours drive up the Taconic State Parkway. 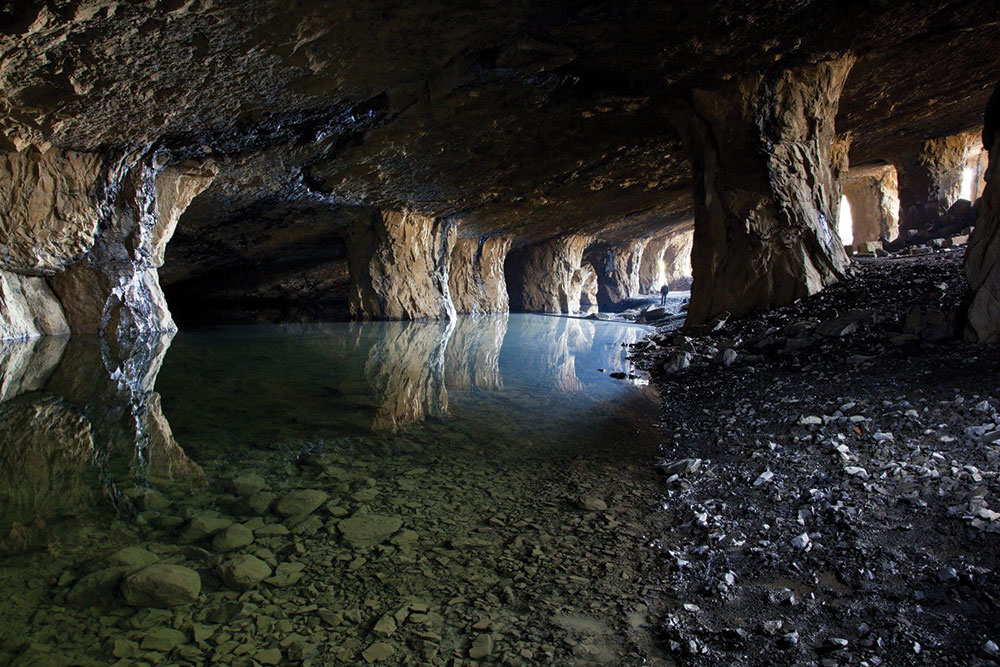 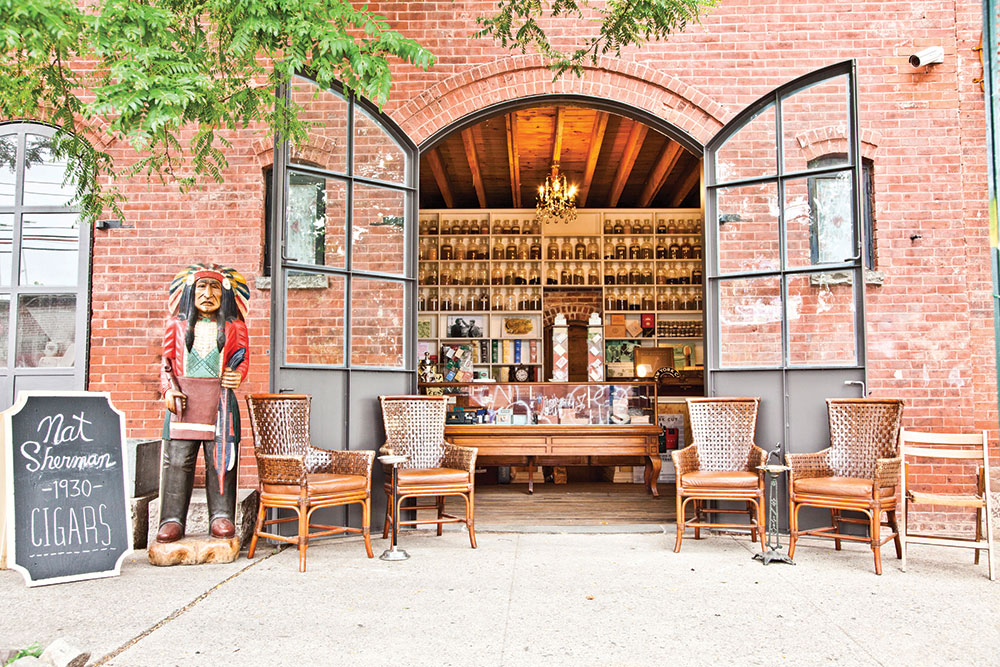 Something About the Water
New York City-based inventor and aerospace engineer Daniel Prieto Preston is also a food and drink artisan. His chocolatier venture, Cacao Prieto in Brooklyn, provides fine chocolates using cacao and sugar from his family’s century-old farm in the Dominican Republic. Meanwhile, at Widow Jane Distillery, on the same premises, the straight bourbon whiskey shimmers with a rare water from the Hudson Valley.

That pristine water is sourced directly from the caves of the Widow Jane Mine at the A.J. Snyder Estate in Rosendale, a tiny village in Ulster County that supplied the limestone cement for the Brooklyn Bridge, Miss Liberty’s 27,000-ton pedestal, and the Empire State Building. So the very limestone that built this city of skyscrapers is now the basis for one of the region’s finest whiskeys.

Apparently, in terms of beneficial minerals, the limestone found in Rosendale surpasses that which is found in Kentucky. Cacao Prieto’s Diana Marano elaborates: “The main component of the limestone water is that it is rich in magnesium and calcium. The magnesium in the limestone reacts with the fatty esters and tannins in the whiskey to actually rearrange its chemical makeup.” 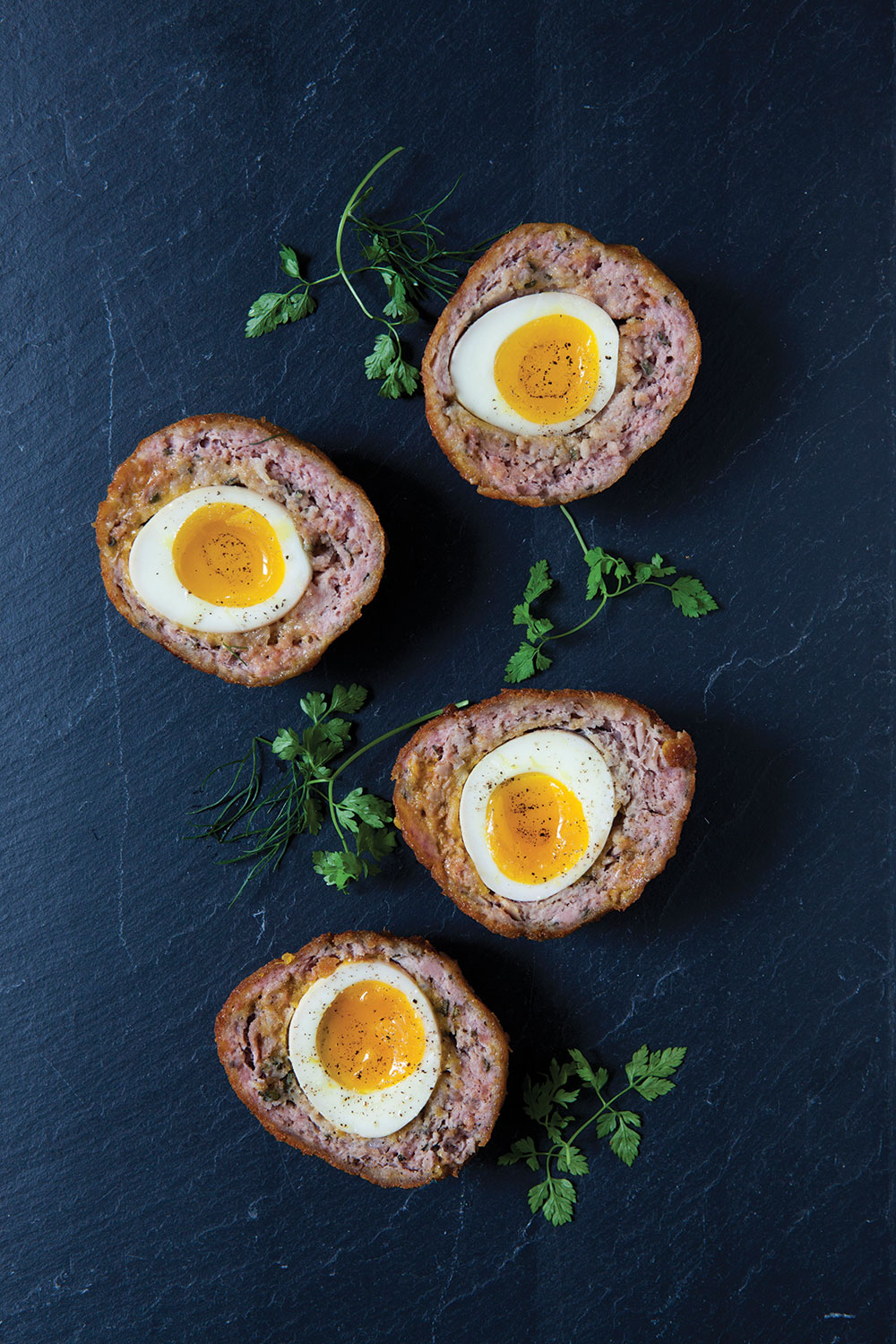 Pub Grub
When the Fat Radish opened in a former sausage factory on a relatively obscure Lower East Side street in late 2010, most critics wondered whether it would be hampered by its location. But being off the beaten path hasn’t stopped this restaurant—a spinoff of A-list events and catering company Silkstone Events—from attracting a devoted following. A self-proclaimed “seasonal British” eatery, the Fat Radish’s white-washed brick walls, oversize mirror, candles everywhere, and scattered skylights make the space as rustic and delightful as very good pub happened upon in the midst of England’s downs on a sunny day. And Fat Radish’s space isn’t the only aspect that’s lighter than expected: Its fare, which is traditional British with more than a few twists, is delightfully flavorful, without the heaviness usually associated with pub fare. Though the menu changes according to what’s available, think: avocado toast with spicy soft-boiled eggs; Caesar salad with anchovies, bacon, and eggs; and duck-fat-fried chips with a classic cheeseburger—all of which have won rave reviews. But while the Fat Radish is quintessentially New York City in its hipstervore clientele, its menu depends upon 24 farms and small businesses located throughout New Jersey and New York State, 11 of which are in the Hudson Valley, namely: Beth’s Farm Kitchen in Stuyvesant Falls (jams and chutneys); Old Chatham Sheepherding Company (award-winning Black Sheep cheeses and yogurts); and Hudson Valley Fresh in Poughkeepsie (dairy). Produce comes from Windfall Farms in Montgomery, Garden of Spices in Greenwich, Hudson Valley Organic in Warwarsing, Paffenroth Farms in Warwick, John D. Madura Farms in Pine Island, Berried Treasures in Roscoe, and Migliorelli Farms in Tivoli.