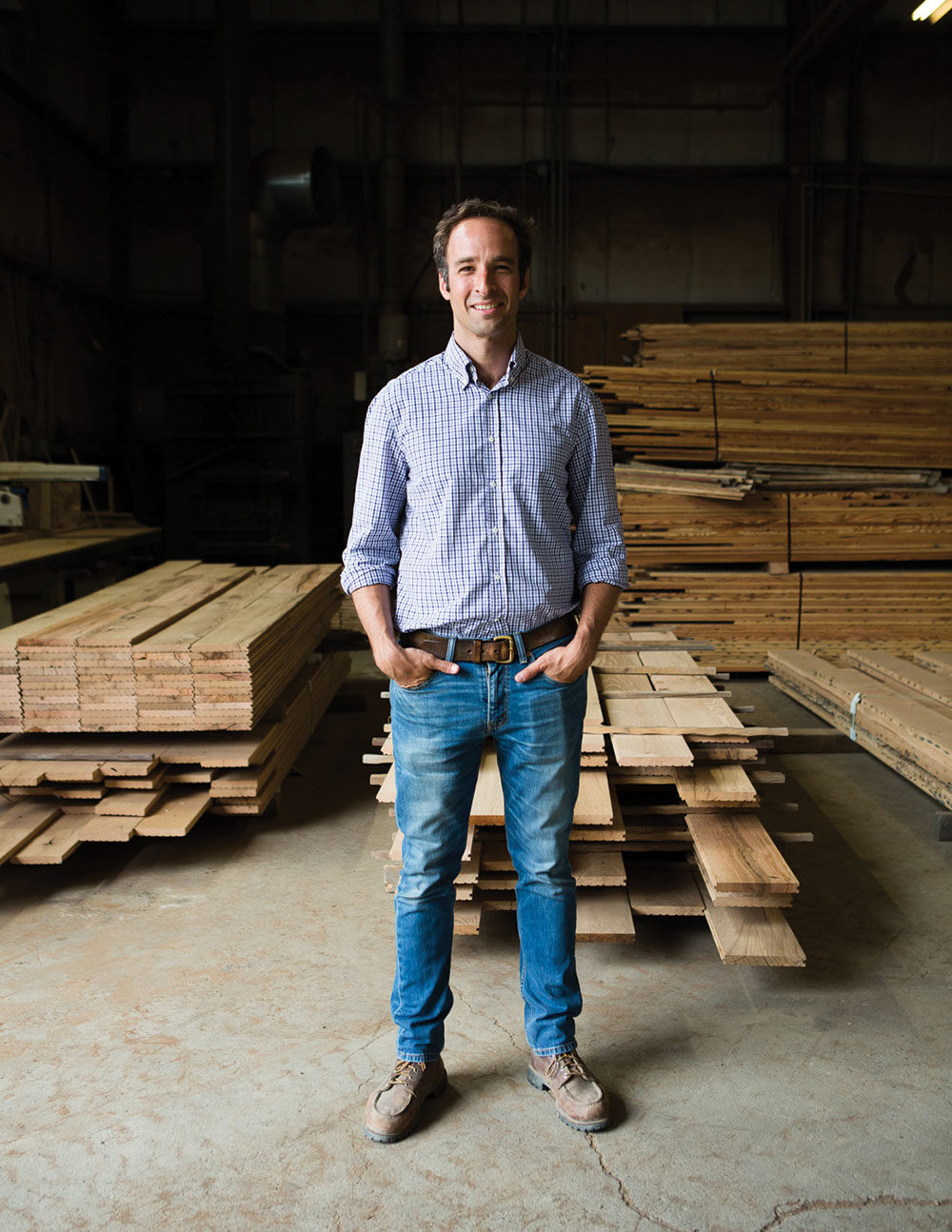 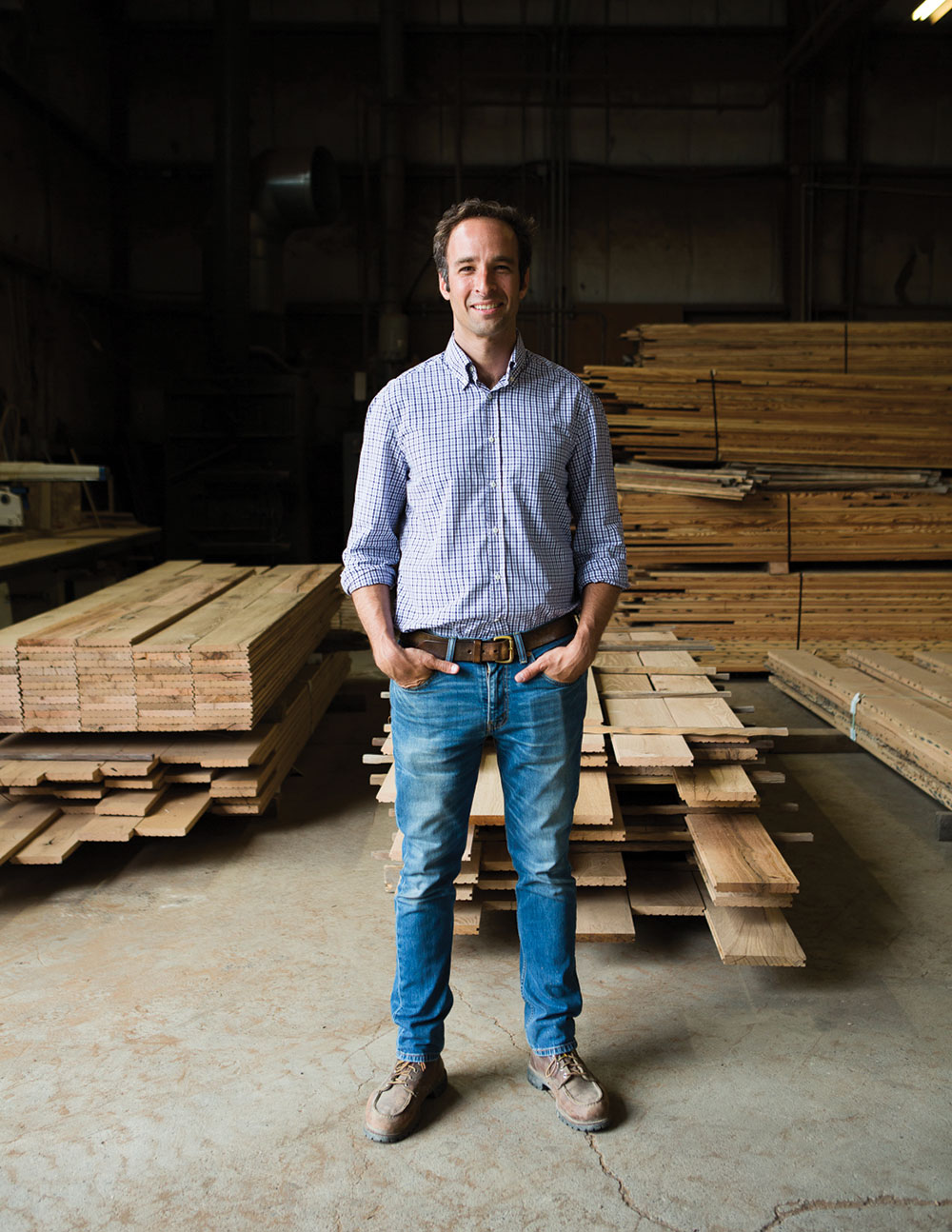 HOMETOWN: Reading, Pennsylvania
LIVES IN: Brooklyn Heights
WORKS IN: Dumbo (showroom), Pine Plains (headquarters), and on the road
EMPLOYS: 35 people in Pine Plains with full benefits. “I’m proud that we’re bringing manufacturing back to New York [State].”
LOVE/HATE RELATIONSHIP WITH: Ikea. “I’ve got some Ikea pieces and they’re great. There’s a place for Ikea in this world. But I don’t think people want to live in an Ikea world.”

Walking around the Hudson Company’s headquarters in Pine Plains, northeastern Dutchess County, is like walking through the detritus of the 20th century. Mountains of wood are stacked outside, and company founder and president Jamie Hammel knows where every piece came from. There’s wood from factories in Pennsylvania built just after the Civil War, fallen barns from the Hudson Valley, and decommissioned water tanks that once perched atop New York City roofs. But the Hudson Company isn’t a graveyard. It’s a place of rebirth.

The company rescues the region’s architectural history and turns it by hand into floors, beams, paneling, and molding for architects’ use, including in some major projects. Last year the Renzo Piano Design Workshop and Cooper Robertson Architects turned 60,000 square feet of Hudson Company’s reclaimed heart pine into the new Whitney Museum’s floor, creating the largest reclaimed floor in the country.

“There’s a strong trend in consumers to want to know where their product came from and how it was made,” says Hammel.

In 2010, when Hammel founded the Hudson Company, the reclaimed wood industry had a bad name. Materials were often harvested using unscrupulous practices (including outright theft), and there was no guarantee that a floor would be delivered as ordered. But Hammel took advantage of the antique lumber marketplace’s growing hunger for bespoke, handmade products by developing a high standard of quality with guarantees and warranties. “I like design, and the floor is the canvas on which you build everything,” he says.

Before reclaimed wood became trendy, Hammel often got wood for free from demolition crews. Now, people with old barns on their property or developers taking down factories look to see if they can sell Hammel the materials. “In New York, the architectural landscape is evolving so rapidly,” he says. “Buildings are constantly coming down. I’m always out looking at barns.”

Sometimes the journey from the wood’s origin to its final destination is short. When the elevated railway in Manhattan’s Meatpacking District was being transformed into the High Line urban park, the Hudson Company recovered its beams and joists, took them upstate for processing, and returned them for reinstallation. The project’s carbon footprint was essentially nil.

But the environmental benefit of reusing old wood isn’t always what attracts people. “We don’t get a lot of clients who say ‘I want to do the right thing for the environment,’” he says. “People like reclaimed wood because they like stories. They like the insect tracks, the nail holes, the ferrous stains, the patina. They want to be able to say, ‘Oh, this came from a barn in Ohio,’ or ‘This was the Coney Island boardwalk.’”
The company also deals in “select harvest” woods: storm-felled trees, dead standing trees, and trees cut down by independent sawyers. Sometimes sustainably harvested trees are more appealing than reclaimed wood to clients—and to Hammel himself.

“I had such anxiety about what floor to put in our new apartment,” he says about the space where he lives with his wife, son, and daughter. “I’d been hoarding the best reclaimed boards for myself for the past five years, so I had built up this massive collection of really special, unique boards. And in the end I was like, ‘Nah, let’s just go with new oak.’ The planks are nice and wide, and it’s rich in detail and character. I love it.”