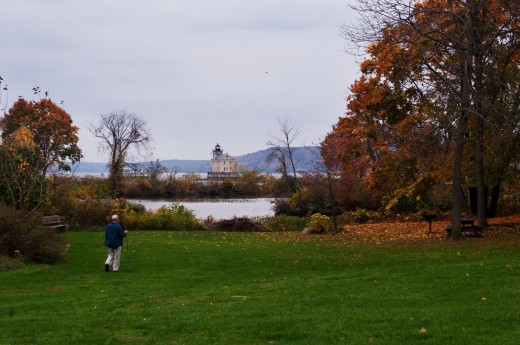 Kingston Point Park’s view of the lighthouse on the Hudson. Photo by Kevin Godbey Photography

The waters of the Wallkill and Rondout flow in from the south and west to meet the Hudson River on Kingston’s historic waterfront. On the other flank the city fronts on the Esopus Creek, after it leaves the Ashokan Reservoir, one of New York City’s water sources in the Catskills, on its way toward Saugerties.

Kingston is where railroad corridors historically converged. The Wallkill Valley Railroad came in from New Paltz via the Rosendale trestle; the New York, Ontario & Western Railroad came in to Uptown Kingston from Stone Ridge, Hurley, and points southwest; and the Ulster & Delaware Railroad ran up into the Catskill Mountains to move New Yorkers to their summer resorts by the hundreds of thousands annually at the turn of the century.

A transformation is underway in the city as we restore connectivity on these historic pathways. Kingston will be a hub for water trails and rail trails and a great place to live and work. As a first in a series of projects to this end, the Kingston Point Rail Trail is under construction now to link Midtown to the Rondout and Hudson River waterfronts.

By improving the connection between the human and natural environments, Kingston will create a ‘green infrastructure’ that reduces fossil fuel consumption, enables freedom of mobility, encourages more physical activity, allows children to walk or bike to school, reduces traffic congestion, and makes it possible to create economic growth at the same time. For more information check out the Kingston Greenline. As we say in Kingston, “historic is just our beginning.”