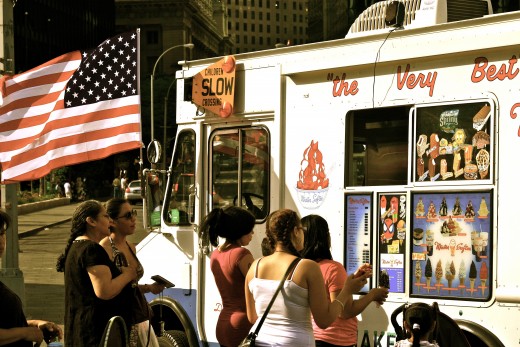 I was recently out walking around in the Ponckhockie neighborhood of Kingston, on Labor Day, and heard a familiar sound. It could have been any hot summer day. A sound that goes back to at least the 1980s for me, but I am sure has been around since the first ice cream truck opened its sliding glass windows to the kids flocking to some relief from the summer heat.

A jingle emanates throughout the neighborhood that cannot be mistaken for any other service in this town. It was especially poignant on Labor Day, however, any day you hear “Union Maid” it means a cold reprieve is near in the form of ice cream. But, you had better rush out fast before it disappears down the block, headed for the Rondout or Midtown.

This is just one of many characteristics of this town that make it special. Think about it. Kids rush to get ice cream the instant they hear a Woody Guthrie tune championed by Pete Seeger from the dust bowl days. Gritty lunchbucket city. Those are the roots. It is nice to have people moving here to join us who also appreciate that.

There once was a union maid, she never was afraid
Of goons and ginks and company finks and the deputy sheriffs who made the raid.
She went to the union hall when a meeting it was called,
And when the Legion boys come ’round
She always stood her ground.

This union maid was wise to the tricks of company spies,
She couldn’t be fooled by a company stool, she’d always organize the guys.
She always got her way when she struck for better pay.
She’d show her card to the National Guard
And this is what she’d say

Visit the Daily Freeman for a video on the hard-to-find ice cream truck.