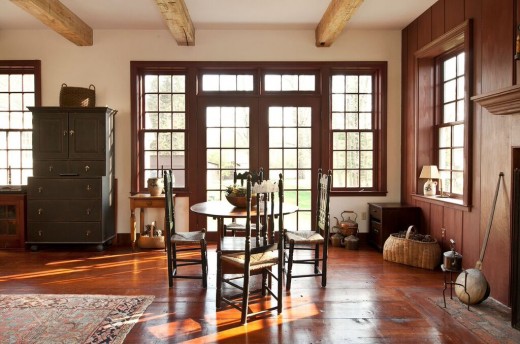 A game table setting in ‘Lang Syne,’ the home of Tom and Linda Hopfenspriger.

Former U.S. President Thomas Jefferson dedicated his life to designing and redesigning his beloved Monticello. Of his efforts he once stated, “architecture is my delight, and putting up, and pulling down, one of my favorite amusements.” The same could almost be said of my friends Tom and Linda Hopfenspriger. Over the course of their thirty six year marriage they have, renovated, restored or built six homes. For the last six years they have invested their time in the renovation and expansion of their home, lovingly referred to as “Lang Syne.” I believe even Thomas Jefferson would be awed by their efforts. I recently sat down with Tom and Linda to discuss their lives, their home and their children, Mehren and Kurt, for the June issue of Chronogram. Naturally, I brought the talented Deborah DeGraffenreid along to photograph Tom and Linda’s home and interiors. Working with Deborah is a dream; her professionalism and eye for detail make each shoot a delight. In fact, Deborah’s photographs were so above par, and Tom and Linda’s home so appealing I thought I would share a little more of the interview with you. Consider it the extended cut. 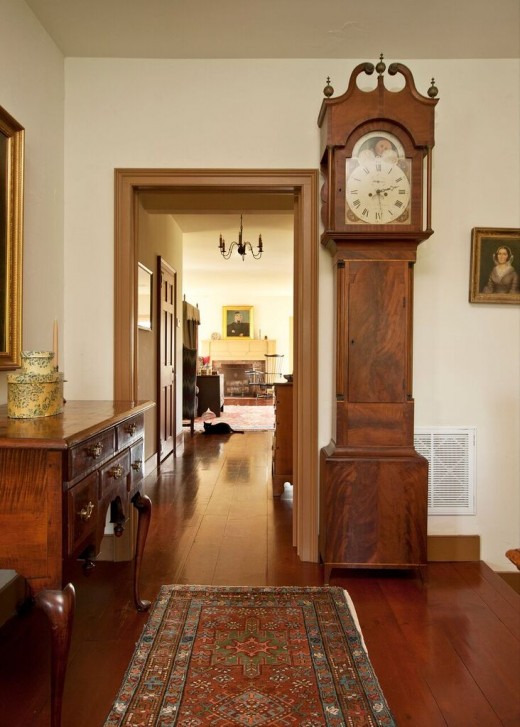 A rare Kingston Case Clock is one of Lang Syne’s prized possessions.

In December of 2008, I had the pleasure of meeting Tom and Linda during a Holiday party hosted by Avery Smith and Mary Stephanie Corsonnes. Avery, Tom, Linda and I all share a mutual affection for 18th Century American furnishings. In our initial conversation Tom stated, “we purchase two pieces each year.” My mother – who similarly collects 18th and early 19th century furnishings – typically purchased two to three pieces each year as well. Therefore,I instantly felt a connection. Over the years through events, projects, charities, and even a wedding, Gary and I have developed a great fondness for Tom and Linda. Tom never fails to amuse, while Linda is always gracious and charming. 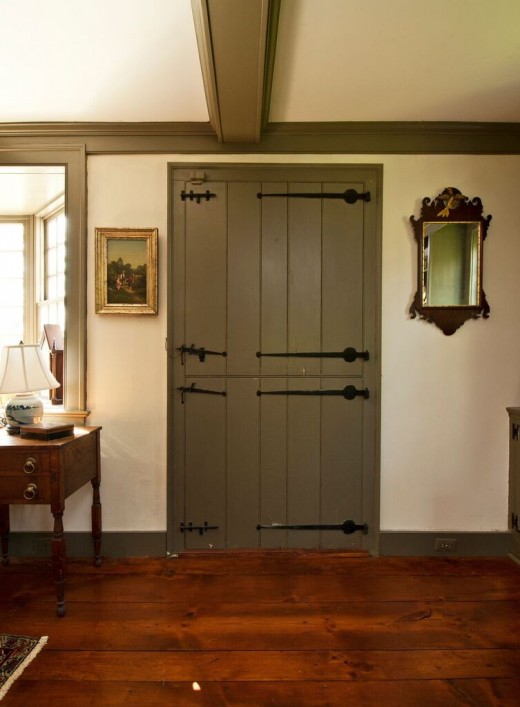 Have you ever gone for a Sunday drive through the country, turned onto a meandering tree lined road craning your neck to spot secluded homes or stately mansions? Or spotted a house you just adored, thinking “gosh if only that were my house?” Perhaps you may have dreamed of buying a home whose footprint was perfect for expansion. If the answer is yes to at least one of those questions the Hopfenspirger’s story of Lang Syne is a tale for you. Located in Marbletown, NY, Lange Syne is situated on thirty-six acres, tucked just off an idyllic tree lined lane. In the 1800s Lang Syne’s property included an 18th century clapboard farmhouse. By 1936 however, the farmhouse, with its applied Victorian elements, was ramshackle at best. The initial 18th century house was then torn down and replaced with a modern 1930’s styled Dutch Colonial. Several interior elements of the newly christened Lang Syne were salvaged from the 18th century structure. Charm – with a touch of the past – made Lang Syne a welcoming home for the Kenneth and Whitt Davenport family for over seventy years. Suffice it to say the Davenport’s were known as perhaps one of the Hudson Valley’s most gracious families. When the Hopfenspirger’s purchased Lang Syne, the Dutch Colonial had a square footage of 2,400 feet. Not bad for a house of the 1930s. As anyone who is a fan of Dutch Colonial architecture will know, Dutch colonials have a few common features: compact kitchens, a small powder room, a single second floor bath and a breakfast room of minute scale. 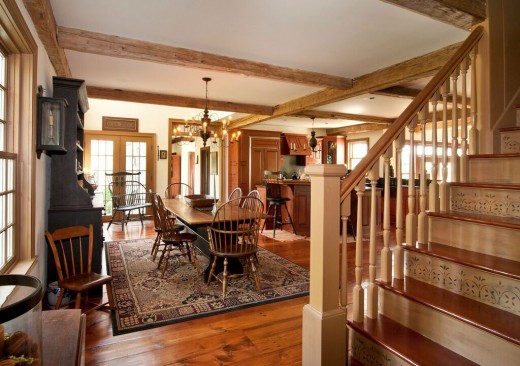 Wide beam floors and 18th Century Beams were included in the home’s design.

To know Linda Hopfenspirger is to understand she is an architect incarnate. Within minutes of her initial visit to our 1930s Dutch Colonial, plans were made to bring down walls, increase window sizes, and replace floor boards. My head still spins when I consider how effortlessly the suggestions flowed (excellent suggestions, I might add). With Lang Syne, Linda worked with Architect Michael Lockwood, for about a year to develop the perfect set of renovation plans, which expanded the house by 2,200 square feet. Included in the home’s new design were 12 over 12 windows, wide-plank floorboards, custom millwork and 18th century wooden beams. Throughout the project, Linda held the role of general contractor while contractor Bob Stanfield and Michael Frasca of F and S Woodworking manned the helm of the project. Before you begin to think this is the tale of a Hampton’s renovation moved North, think twice. Each member of the Hofenspirger family were hands-on throughout each phase of the project. The beautiful Mehren plastered walls, Tom cleaned each beam and Kurt worked on the demolition crew. Linda and Tom jointly hand sanded and stained every room’s floorboards. Linda laughingly recalled, “if there is an easy way to do renovations it is not the Hopfenspirger way!” Easy or not, the renovation (though still incomplete), is stunning. The warmth, elegance and inviting atmosphere of the house truly make it a beautiful home, whose eye-appeal is limitless. 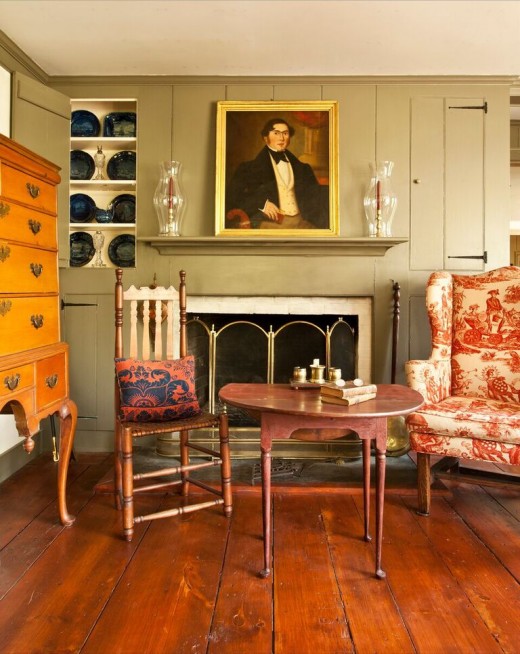 Rather than complicating the interior’s design with fussy sitting arrangements, too many chairs, and endless accessories, Linda designed rooms with vignettes. A vignette may feature a comfortable sitting area, or a game table setting or a display of Historic Staffordshire. People often complain that the reason they do not enjoy antiques is because they’re fussy and uncomfortable. To visit Lang Syne is to have those false assumptions thrown asunder. Each level of the home provides the family and visitor alike with appealing nooks for conversation. In fact the home is so appealing it is almost difficult to leave. As collectors, the Hopfenspirger’s share a love of beautiful things. As Linda smilingly comments, “don’t you just enjoy sitting in each room of your house, admiring your collections?” In fact she was correct, I do often sit in my rooms admiring my varied collections and artwork. The common thought amongst collectors is: you are simply the custodian of an object, piece of furniture, or work of art for a window in time. The other denominator of collecting is the thrill of the hunt. Finding that one coveted piece either at a ridiculously discounted price or tucked away in an obscure location. Tales of contorting your body to make room for a tall case clock on the drive home, tying tables to the car’s roof, or gingerly safe-guarding mirrors are all too familiar. Like a true collector, Tom’s eyes gleam as he recalls finding a rare 18th Century Kingston Case clock on one journey. A gorgeous secretary had its finely detailed top stored in an old barn. “You’ll want the top too” mentioned the owner. “Well it’s in the shed,” the couple remember. It is stories like this that take the stuffiness out of antiques, stories which become added to a family’s history through the generations. 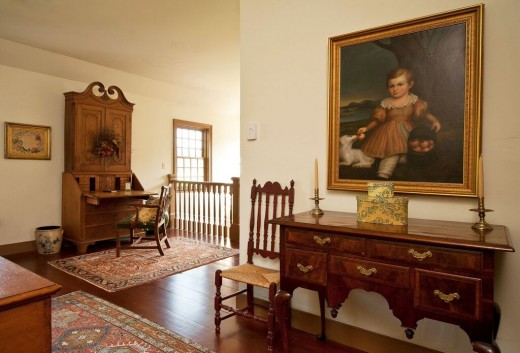 Tom and Linda, recall the secretary’s owner had the top stored in a barn.

The synopsis of Lang Syne is that there once stood a well-used farmhouse, which was later replaced by a home with impeccable charm, which later was expanded into a home very reminiscent of the 18th century. A home a family gathers in together to enjoy their collection of antiques, friends and relatives. As Deborah asked Tom and Linda to pose for a photograph in the home’s light filled gathering room, she wanted the photograph to look relaxed and natural. “Just sit wherever you like, except on the sofa, because nobody sits on the sofa together,” she said. Almost in unison, Tom and Linda, exclaimed, “we do.” The story of Lang Syne is that of an appealing home with even more appealing owners. What could be better?