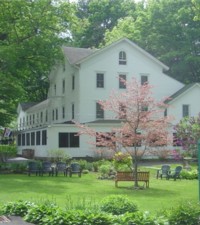 So, I haven’t actually stayed at the Glen Falls House, but I got married down the street from it at the Winter Clove, in an area of the northern Catskills that feels pretty much frozen in time. These “resorts” have nothing in common with their luxury counterparts. They attract families of modest means and can accommodate large groups, who generally pay by the person. Meals, at least those for the kiddos, consist of things like hot dogs and peanut butter and jelly — which we think is perfectly grand. So we’re passing on this LivingSocial deal for a trip to Glen Falls House, which seems like a decent bargain at $187 for two folks, two nights, and includes lots of meals and passes to area attractions. Let us know if you go!