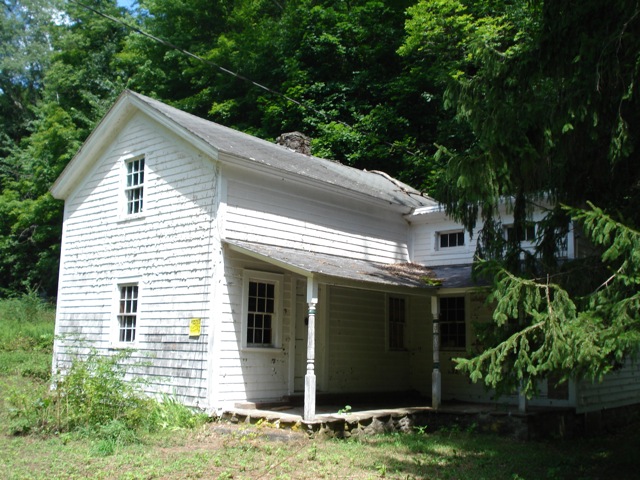 Our Margaretville correspondent has always been curious about this house, rumored to have been bought for peanuts at auction (PropertyShark shows it was last purchased for $10 in 2001!). It’s a 900-square-foot one-bed, one-bath, perched on a stream. Here is what her investigative reporting has revealed:
—
For years I’ve entertained dreams of buying up this little house. It’s cute, within walking distance of everything in the village but seems rural and remote. I’ve pictured fixing the place up, spending the thousands it would take to fix the bridge and a new roof (to which I’d add skylights. Can’t you just see it?). There’d be one large open bedroom on the top floor with a claw-footed tub in the middle. Another open plan living / dining space on the ground floor. I’d raise the roof on the kitchen to let in more light from the eyebrow windows. And, how expensive could the house be?

My guess? No more than $50k given the work it needs and the years it’s been empty. There’ve been all sorts of rumors swirling about the place recently like the new owner bought it at tax auction (true) for $5k (unconfirmed). Also that it used to be a whorehouse. This is the kind of story I’d write as fiction, I love it so much. (In fact it’s close to a plotline in my novel). One neighbor who spied me shooting pics told me it had been a bordello for about a decade up until the late fifties, and the madam, good soul that she was, gave 80% of her proceeds back to the community. That is till the community elders ran her out of town.

What I do know is the current owner, Bob, wants to sell the place unimproved for $150,000. And once he starts renovation this week the price will go up. Meanwhile he has an FSBO sign outside which says “All Offers Considered!” (The exclamation point is his not mine). If you’re interested, give Bob a call at 917 783 0785.